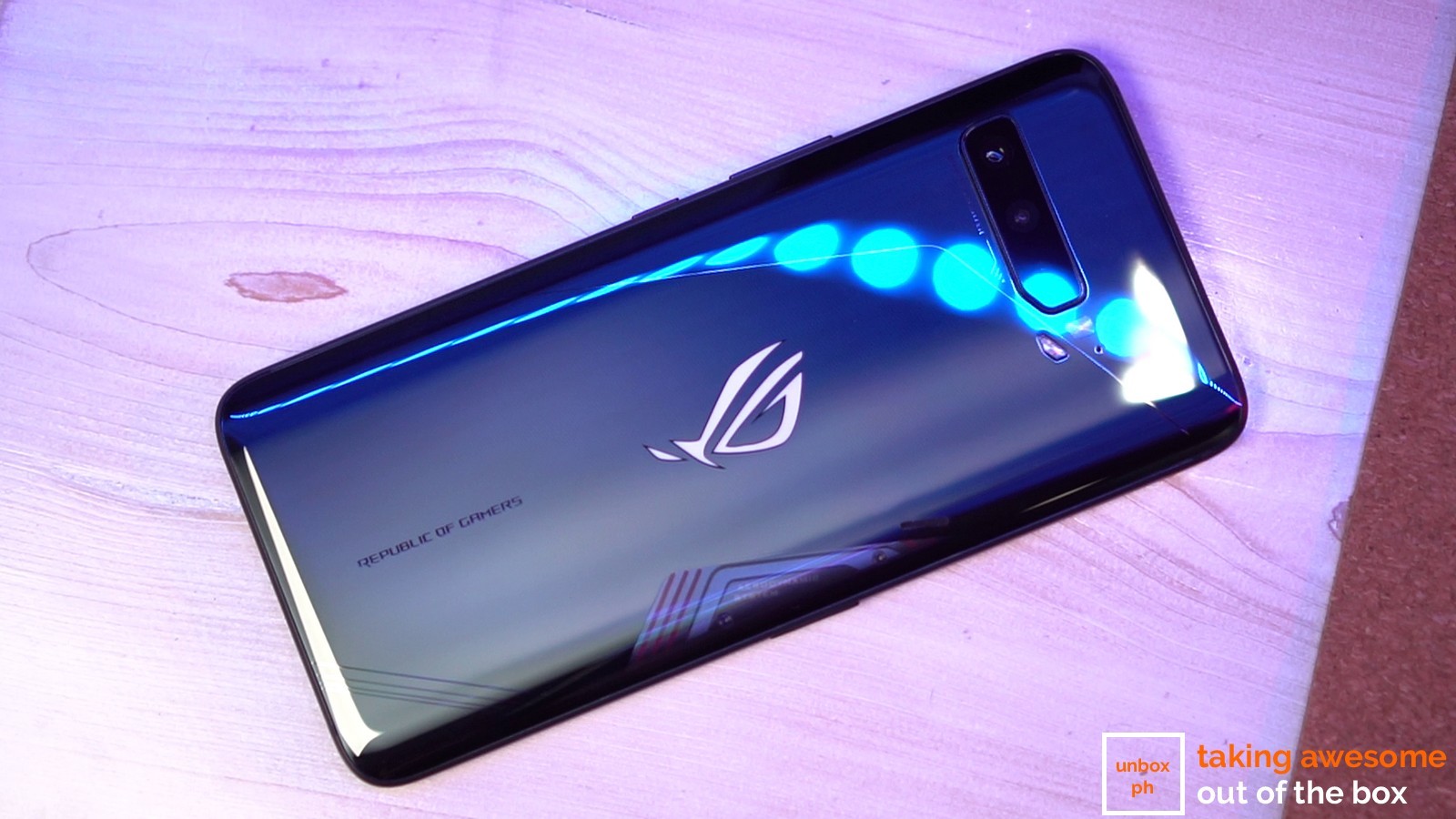 There’s more to a gaming phone than a flagship processor and ultra-fast refresh rates, at least that’s what ASUS is trying to convey with the latest iteration of their gaming phone, the ROG Phone 3. The third-generation device took many of the criticisms that reviewers had with their previous iteration to heart in the design and development of the new phone, and the result is pure mobile gaming bliss. Unfortunately, if you’re not a mobile gamer there isn’t a lot to look forward to in the ROG Phone 3 that you can’t find somewhere else, wrapped in a far prettier (and thinner) package.

A few design tweaks make for a better experience 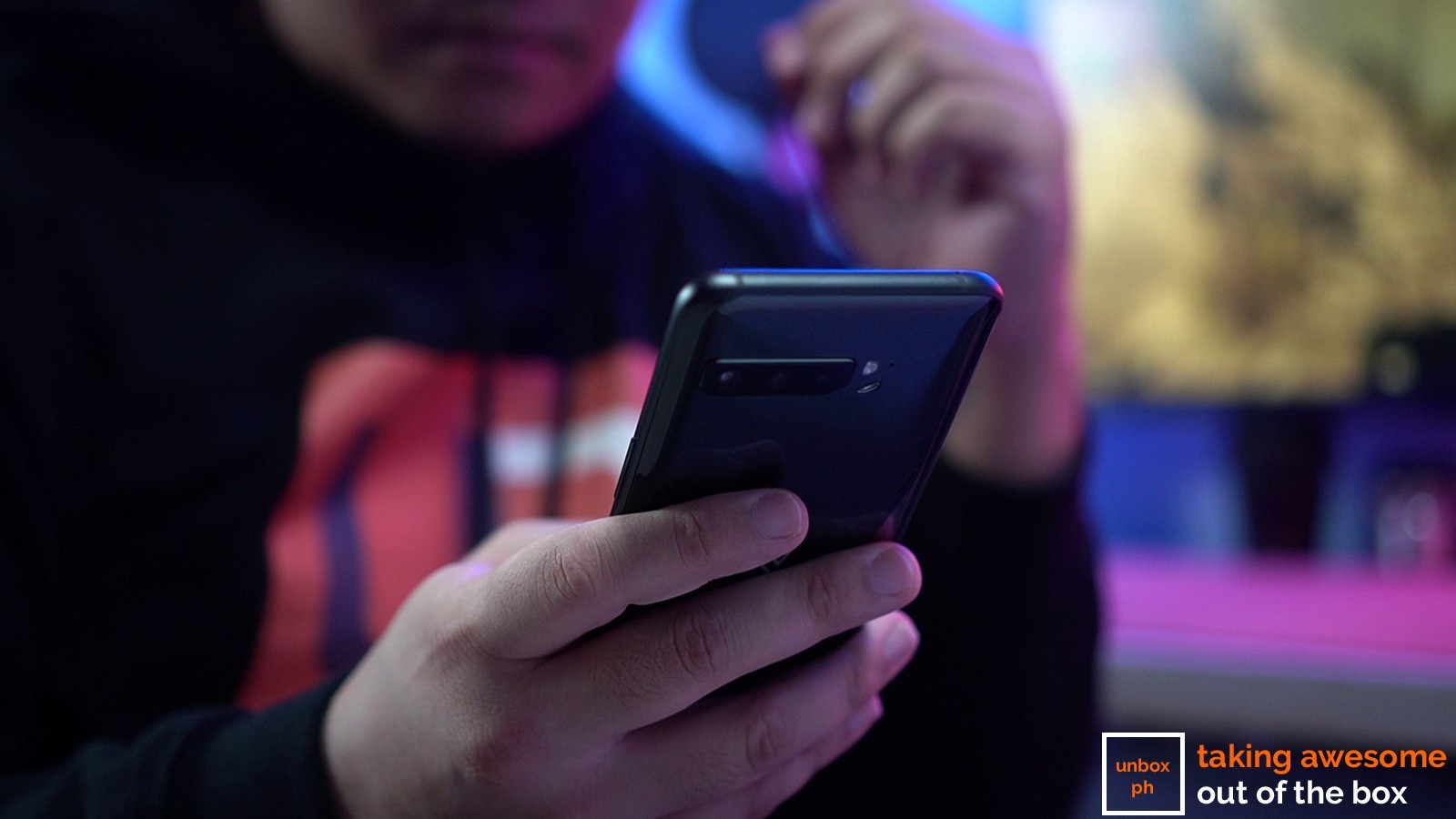 The bad news is that the phone is a literal handful to use as a phone, and even people with gorilla-like mitts like ours will have trouble trying to use it two-handed, never mind with one hand. 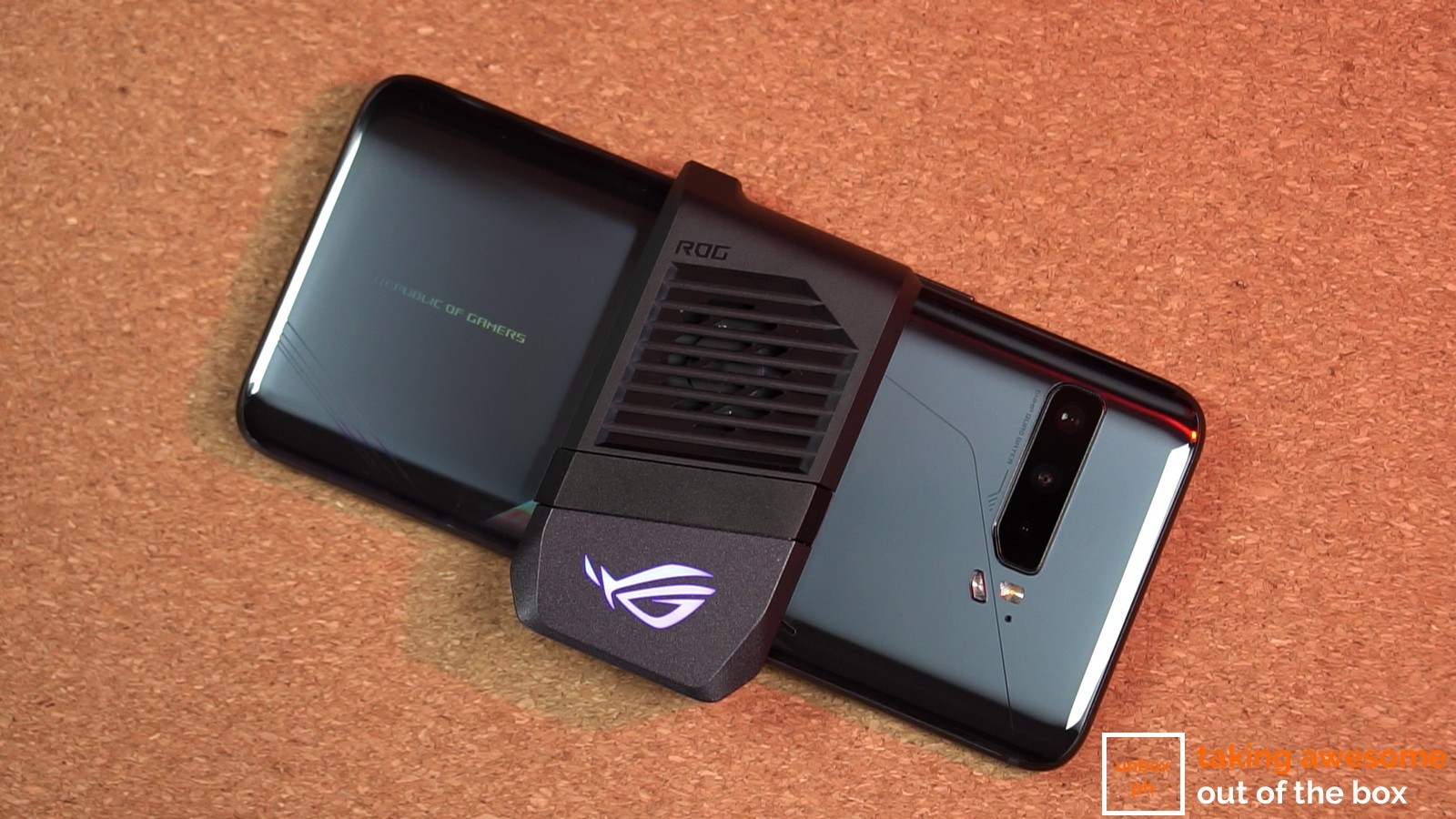 The ROG Phone 3 is a chunky boy, but it’s a well-built chunky boy. Corning’s Gorilla Glass 6 line the front and back of the phone, and overall the phone feels incredibly solid and well built. The side curves gently into the metal frame, and the corners are rounded for ergonomics.

ASUS got rid of the 3.5mm jack on the phone (more on this in a bit), and the ROG Phone 3 still has a side-mounted Type-C connector for the accessories it mounts (protected by a cover that’s a bitch to remove), and a bottom-mounted one for conventional charging. Power and volume rockers are on the right side. Fingerprint unlocks are done via the under-display scanner on the panel. 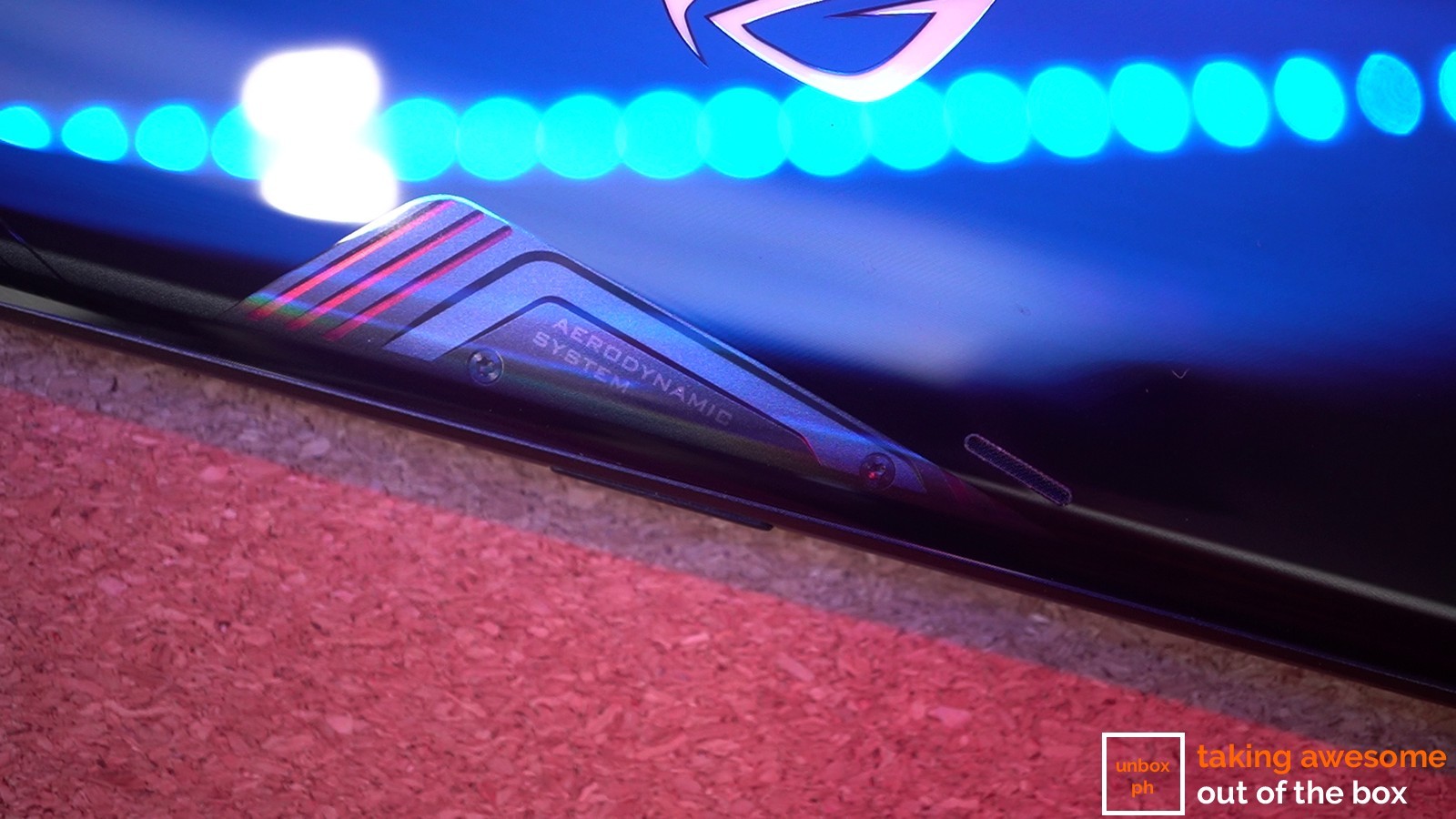 There are still ultrasonic sensors on the side of the phone that act as virtual triggers. The AirTriggers are now in their third iteration, and now not only registers taps and slides but also allows for swipes. You can also partition the shoulder buttons this time around, so you can get four virtual keys instead of two. 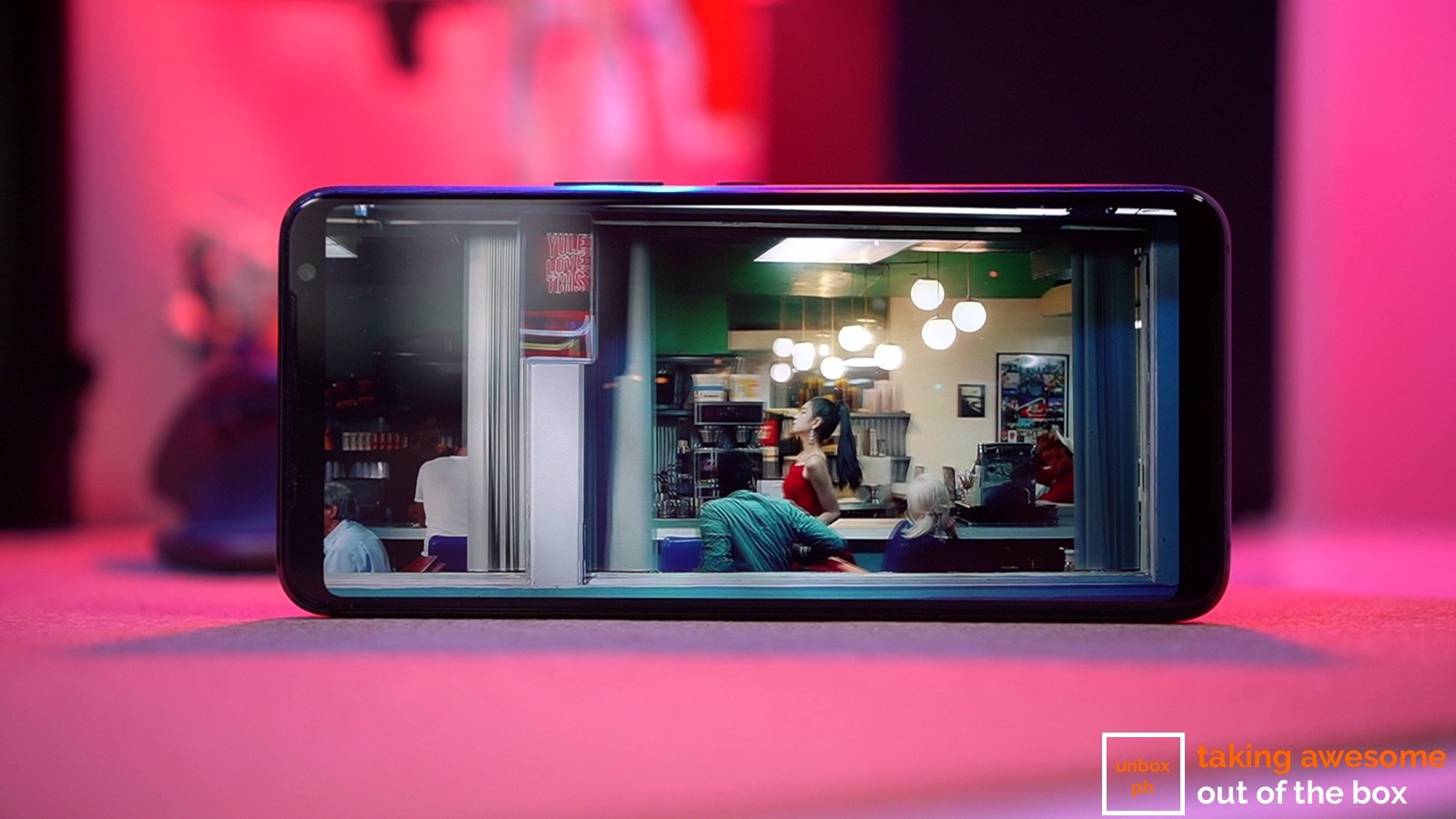 The main reason for the ROG Phone 3’s almost obscene size is the massive 6.59-inch display. While it doesn’t sound all that bigger when compared to say, the Samsung Galaxy S20 Plus’ 6.7-inch panel, it’s not squeezed into a 20:9 aspect ratio – instead, the phone uses a 19.5:9 aspect ratio.

There are no fancy cut-outs here – the phone uses big bezels on the top and bottom of the panel that maximizes the aspect ratio even more.

Aside from the ultra-fast refresh rate of 144Hz, ASUS made sure that the ROG Phone 3’s display was as color accurate as possible, covering 68% of the sRGB spectrum, with a Delta-E value that’s less than 1. The screen is incredibly bright at 650 nits, and the phone is both HDR10 and HDR10+ certified. The only knock on the panel is its 2340 X 1080 resolution, but that’s just me nitpicking. 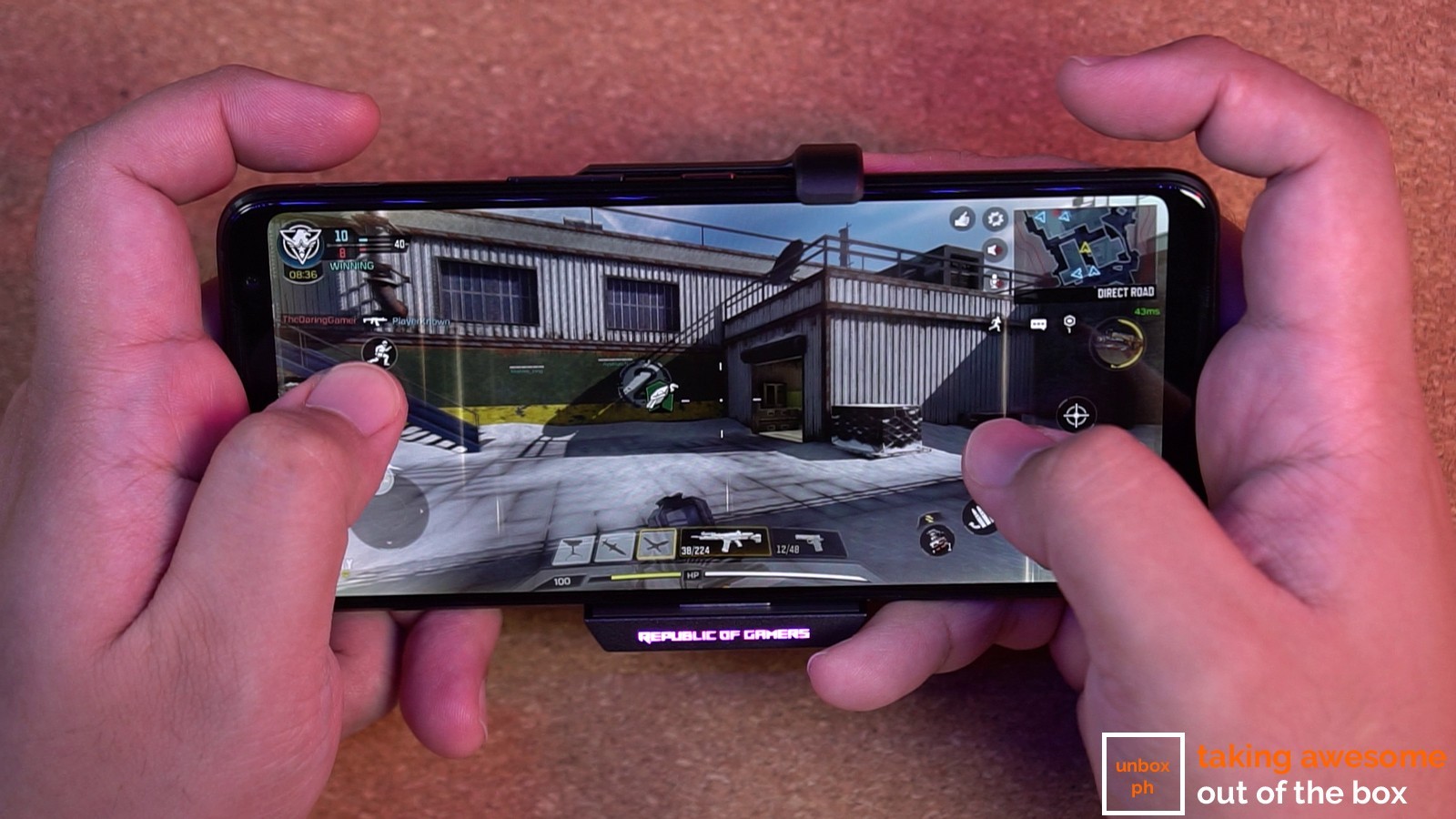 Features made for gamers

While there are phones out there that make for a good gaming experience, there are very few that have the same gaming-centric features that the ROG Phone 3 has.

The side-mounted USB Type-C charging port allows you to charge the phone in such a way that the cable doesn’t get in the way, making longer gaming binges while plugged in incredibly convenient. 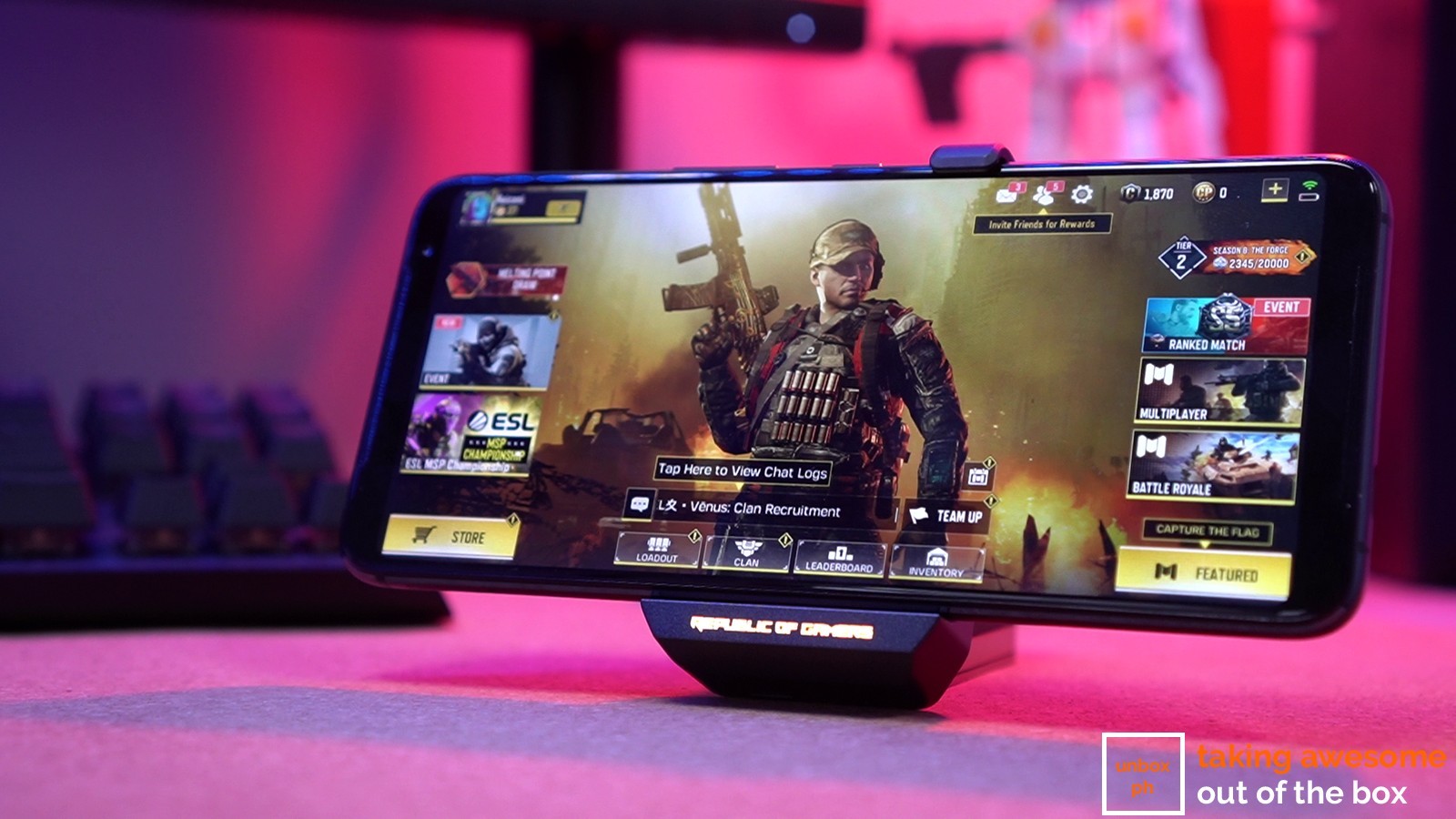 The AeroActive Cooler accessory that ships with the phone brings the 3.5mm jack back, and has the added feature of adding a kickstand so you can watch YouTube and Netflix videos without having to creatively prop up the phone with whatever’s available.

ASUS is also adding a bunch of really interesting accessories this time around. The one we’re most interested in is the ROG Gaming Clip, which essentially allows you to use, PS4, XBOX or Google Stadia controller with the phone. 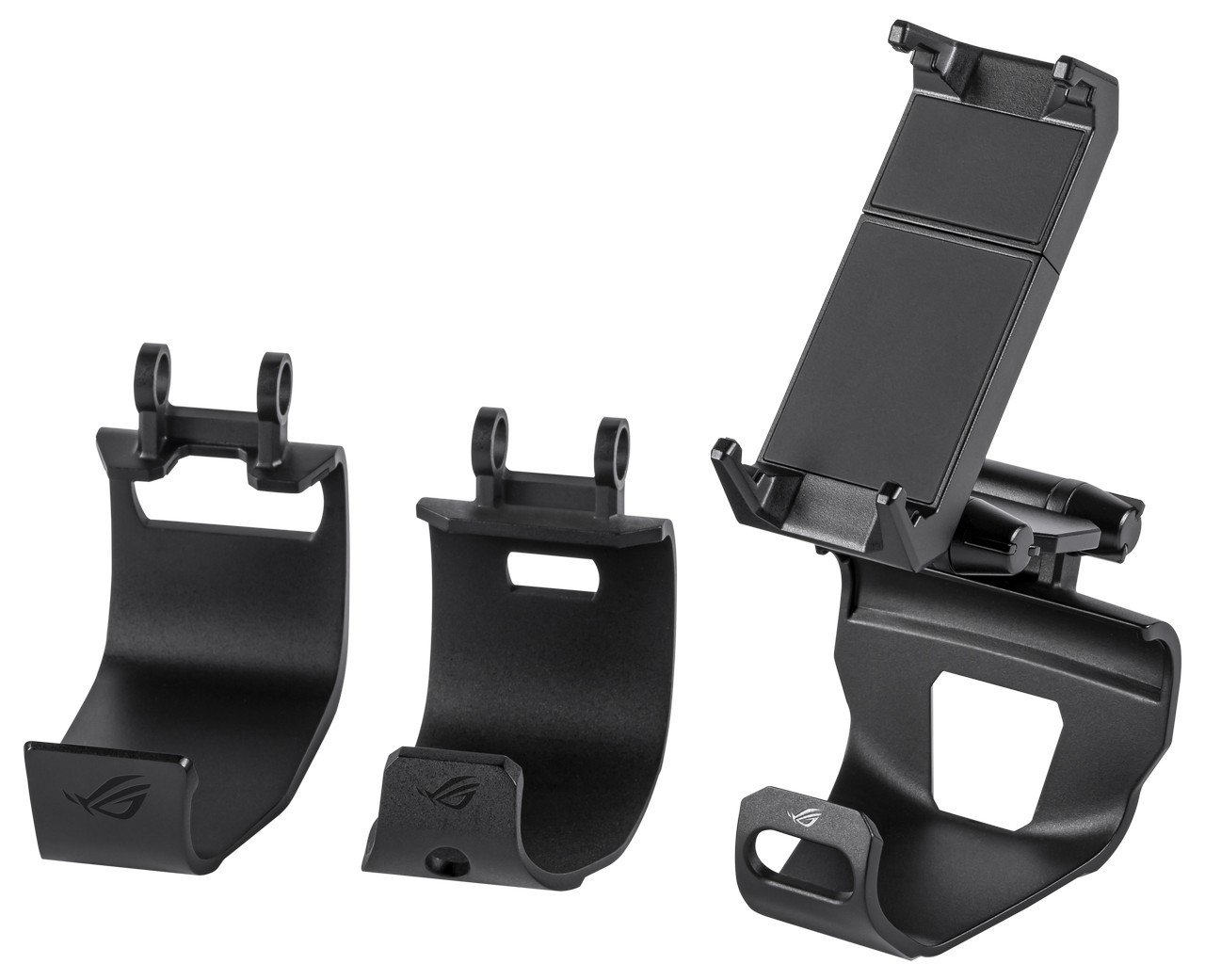 Of course, there are still other accessory mainstays like the revamped Kunai gamepad, TwinView dock with 144Hz screens, but those are going to be mainly niche accessories that you may or may not find useful. One nice accessory that we certainly like is the new LED cover for the phone, which gives the device more protection in terms of scratches and bumps but could still fit the AeroActive Cooler when you needed to clamp it on. 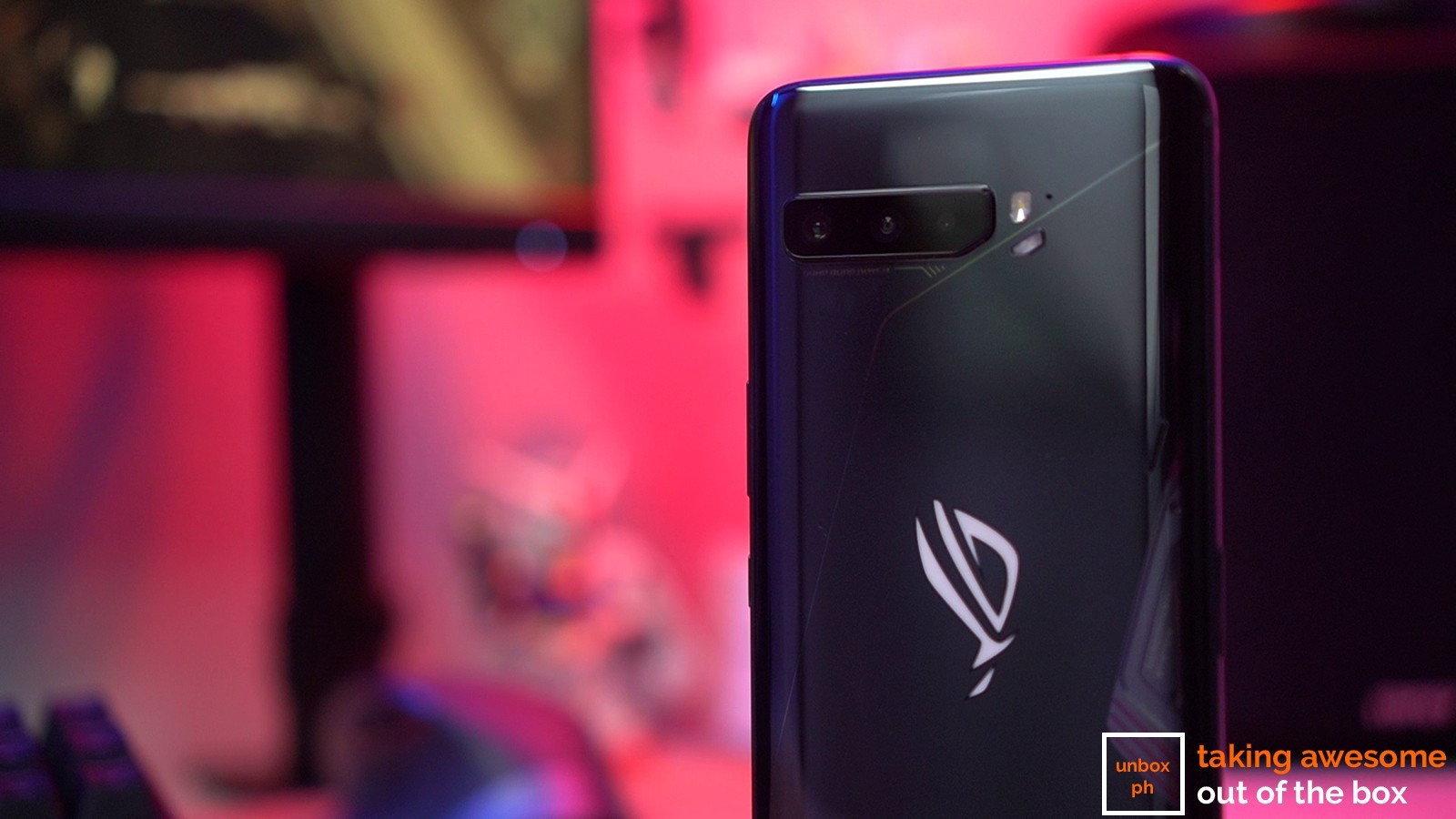 The ROG Phone 3 does a lot of stuff well, but photography isn’t one of those things, unfortunately.

I’m not saying the ROG Phone 3 takes potato-level photos. Far from it though – the phone has a 64-megapixel primary snapper, 13-megapixel ultra-wide-angle camera, and a 5-megapixel macro camera. A front camera is a 24-megapixel unit.

Photos taken in bright light were generally OK, though the color balance wasn’t the best. Dynamic range wasn’t quite there, at least at the levels you’d expect from a flagship phone at the same price range, but it was acceptable.

The tl;dr of it is that the ROG Phone 3 can take good photos, but not at the level you’d expect from a phone in the same price category. But then again, photography isn’t really the point of the phone. 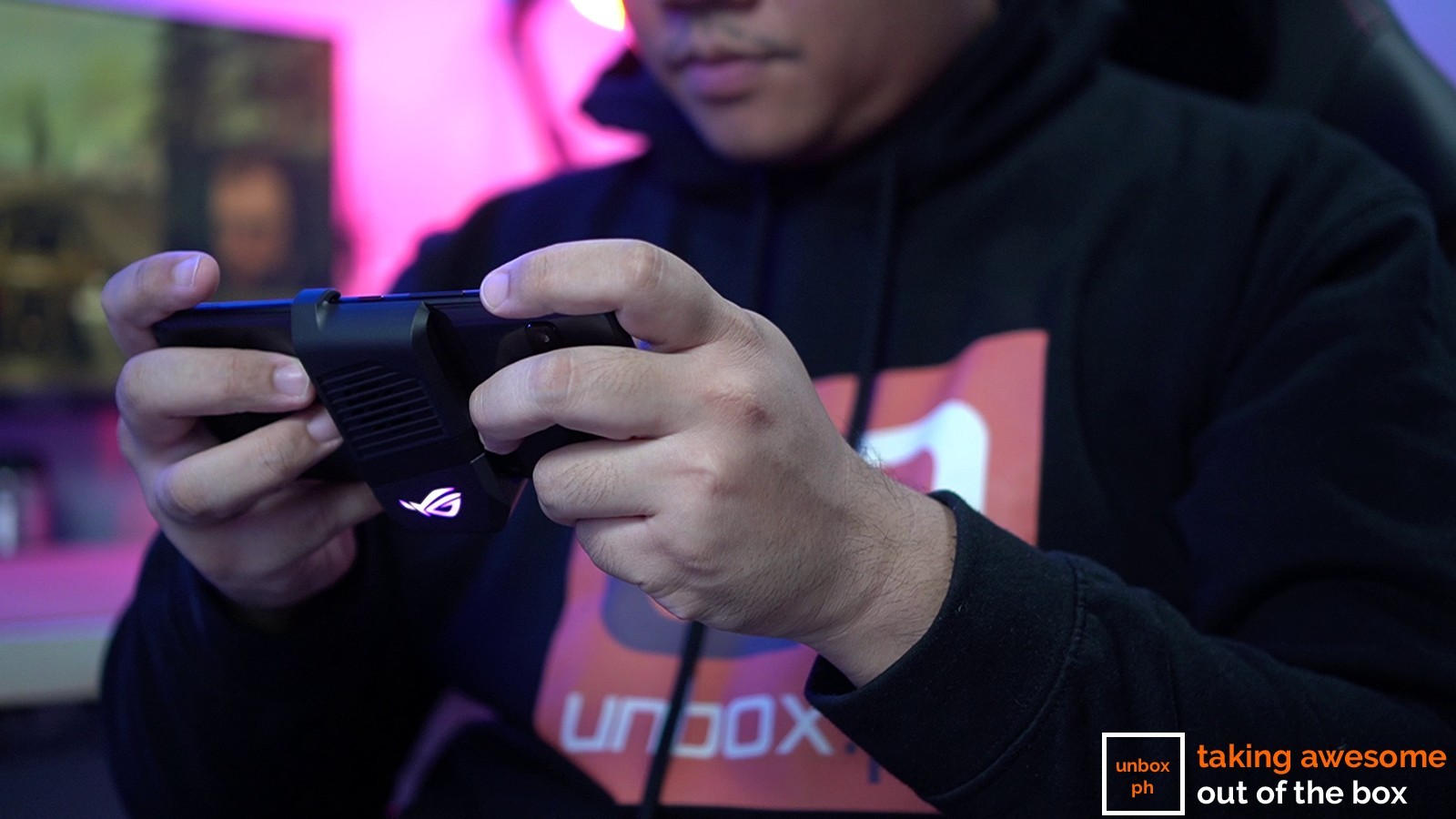 The best, and fastest, hardware available

The ASUS ROG Phone 3 sports the hardware this side of the planet: it’s powered by Qualcomm’s Snapdragon 865+ processor, and comes with up to 16GB of LPDDR5 and up to 512GB of UFS 3.1 storage.

That’s a lot of power under the hood, and ASUS makes that entire package run cooler via their own, custom cooling solution, which is further aided by clamping on the AeroActive Cooler, which has fans that spin faster than the last iteration, dropping the phone’s internal temps down 4 degrees.

And the phone will need all the help that it gets, as it runs rather warm, especially when set in the highest setting in X-Mode. All phones get warm obviously during prolonged use especially when gaming, though we did notice that the ROG Phone 3 was a little warmer than we were used to.

People who like to tweak their phones will also appreciate the phone’s X-Mode, which allows users to bump up clocks themselves up to the upper 3.1GHz limit instead of letting the phone do it automatically. This is useful if you want to make sure that you’re getting the most performance out of the phone, battery longevity be damned, which is cool. Other improvements can be done via the phone’s Armory Crate software suite, including applying personalized profiles on certain games, including mapping of the AirTriggers, display settings, and more.

The phone comes with the latest version of Android 10, with a UI layer that you can customize. All the customization options are handled via Armory Crate, which includes the lighting on the back. 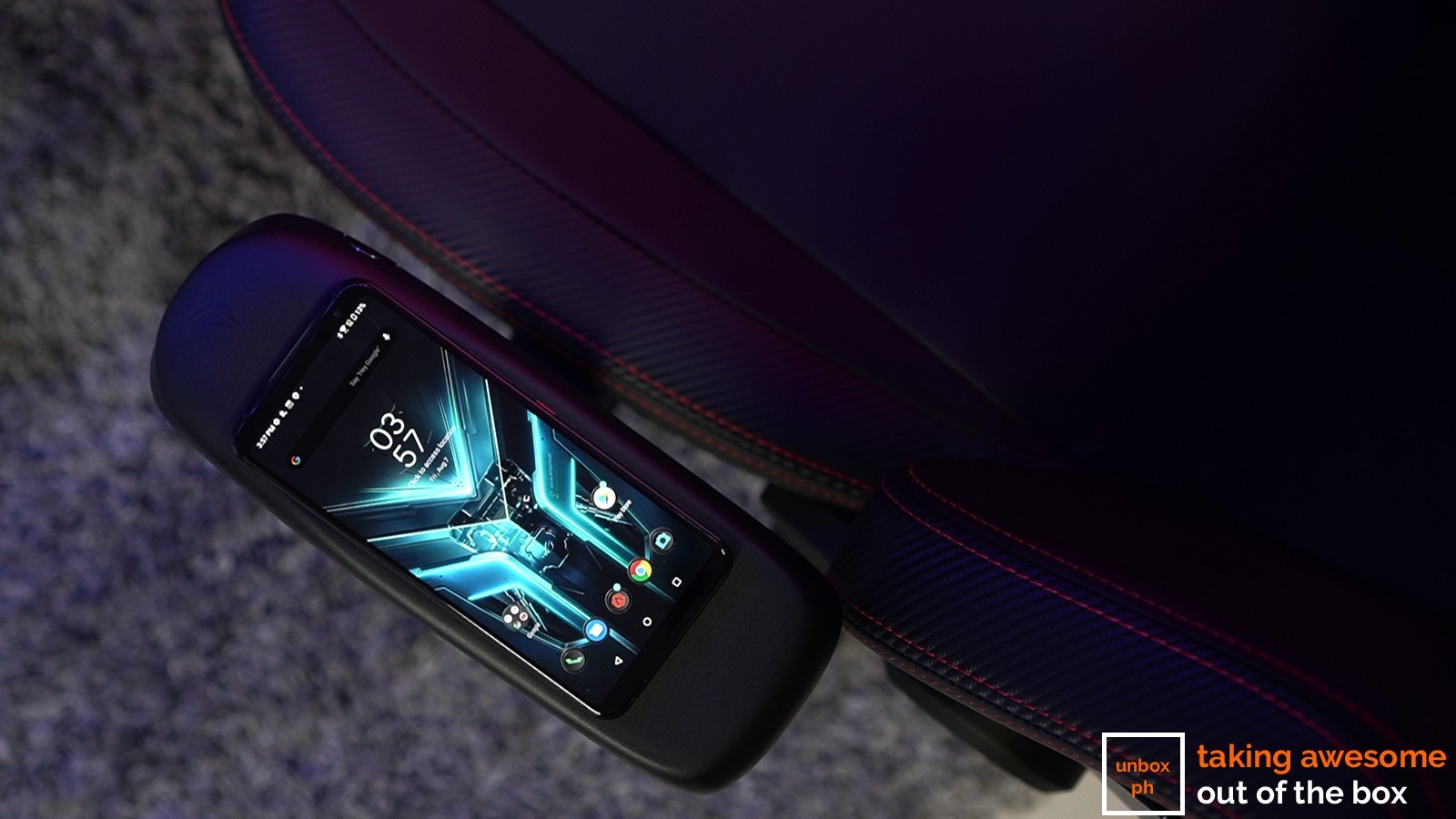 ASUS stuffed a massive 6,000mAh battery inside of the ROG phone which is one of the biggest contributors why the phone is so chunky. But that massive battery comes in handy, as the phone was able to record a 13 hour and 30 minute PCMark Battery Benchmark score while the display was on 144Hz mode, which is pretty impressive. Obviously your battery life will depend on a myriad of other things (and you probably won’t get that endurance if you’re playing all day) but it’s pretty nice that you’ll be able to get all-day battery life when we’re all allowed to be outside again. 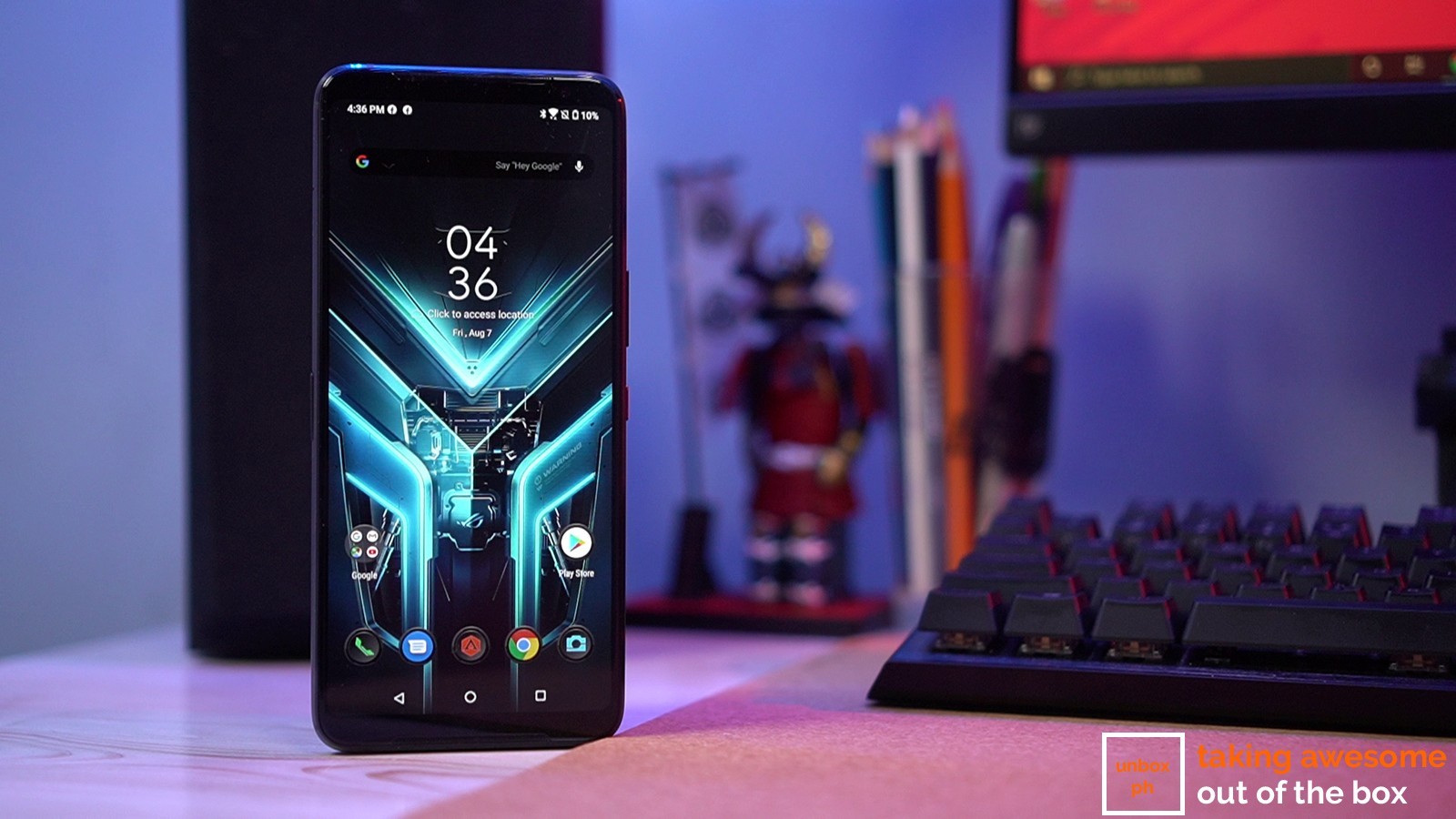 Verdict: Perfect phone for gamers, but it’s definitely not for everyone

ASUS has pretty much nailed the concept of the gaming phone with the ROG Phone 3. The thoughtful gaming-centric touches like the virtual shoulder buttons relocated charging port, and support for a myriad of accessories make it one of the best, if not the best, gaming phone you can buy this year.

Unfortunately, those gaming-focused features are also the reason why the phone is ungainly to use as, well, a regular phone when you’re not playing. The cameras don’t deliver flagship performance despite being on a phone that has a flagship price tag, though again you’re not coming to the ROG Phone 3 for its cameras.

The ROG Phone 3 does gaming well and should be the flagship device you should get if you care about mobile gaming above everything else. While we don’t know the local price of the phone as of yet, European pricing (which is almost always higher compared to local prices because of taxes) puts the phone at around 999 Euros, which is approximately Php 57.2k for the 12GB/512GB model. We’ll update this story as soon as we get the local pricing of the device. 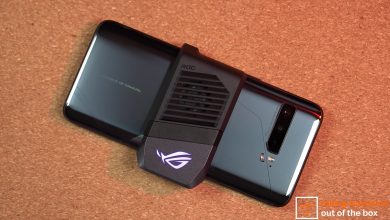 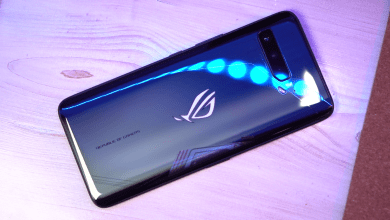 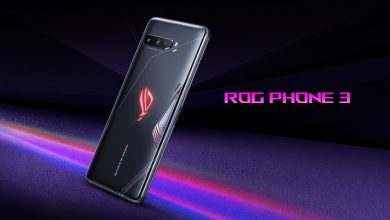 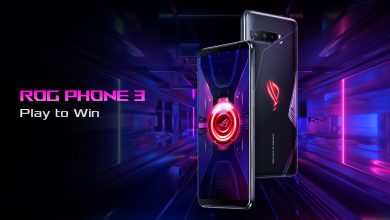