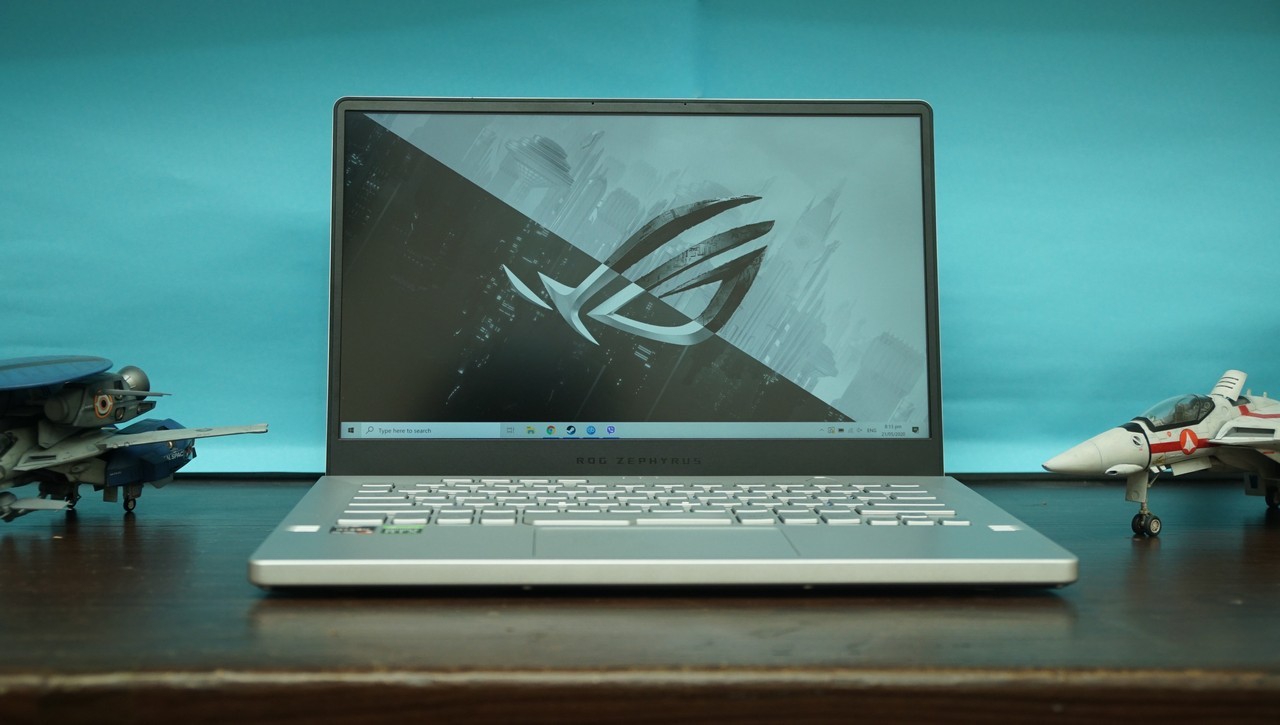 This is the pinnacle of gaming notebooks

While gaming notebooks have improved dramatically over the past few years in terms of overall form factor, performance, and features, one feature that they’ve yet to excel at is battery life. No matter how thin and light notebooks get, they still retain miserable endurance when taken away from the power socket.

That has drastically changed with the arrival of AMD’s new Ryzen 9-4900HS processor. Built on top of a new 7nm process, the red team’s newest mobile chip delivers the goods in both performance and battery longevity, and when paired with NVIDIA’s powerful RTX 2060 Max-Q discrete graphics solution makes notebooks like ASUS’ Zephyrus G14 one of the best gaming notebooks in the market today. 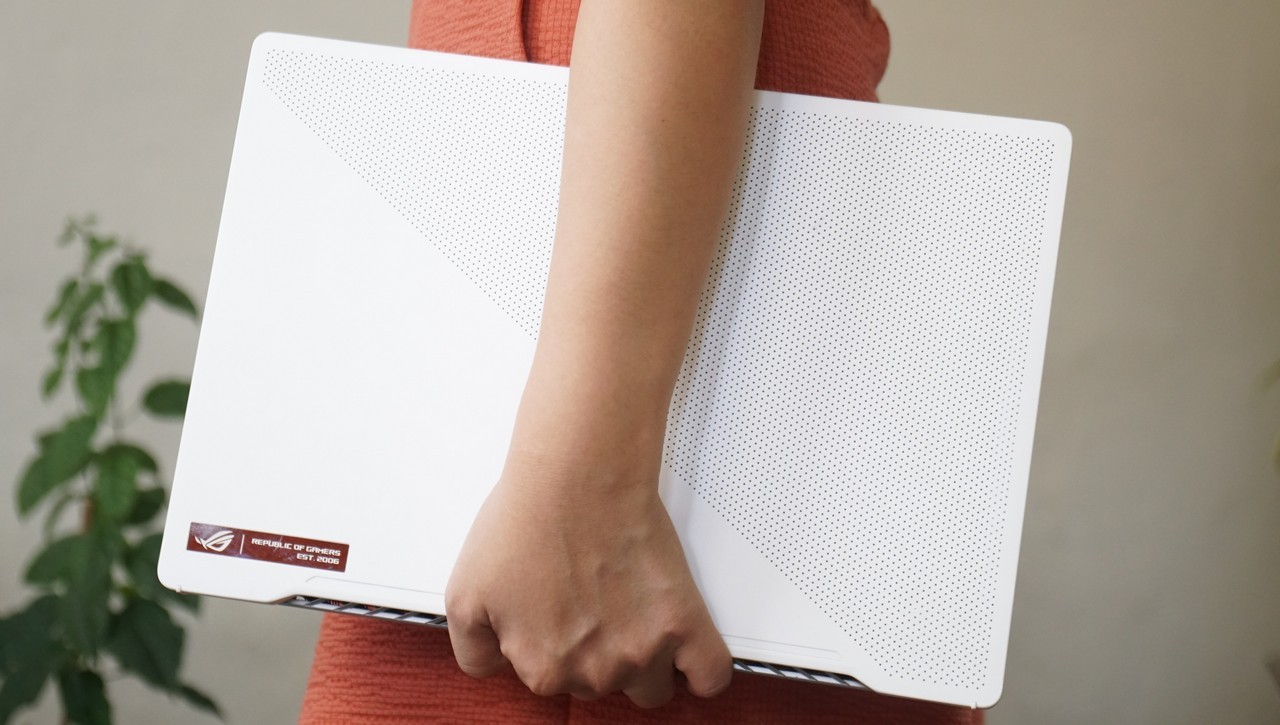 Finally, a gaming notebook that isn’t slathered with RGB

Here’s an unpopular opinion: I don’t particularly like RGB, especially not how it’s used on gaming peripherals nowadays. RGB lighting has fast become a crutch that manufacturers use when they legitimately run out of ideas on how to make their product look visually interesting.

ASUS has gone a different route with the G14. Instead of liberally applying RGB lights to the G14, they’ve outfitted the lid of the notebook with mini LED lights forming microdots that you can be animated.

The review unit that ASUS lent me didn’t have the AniMe Matrix display on the back, but that’s OK, since the visual pop that the perforations on one half of the lid already made the notebook stand out from the usual RGB-equipped notebooks that I usually encounter nowadays. 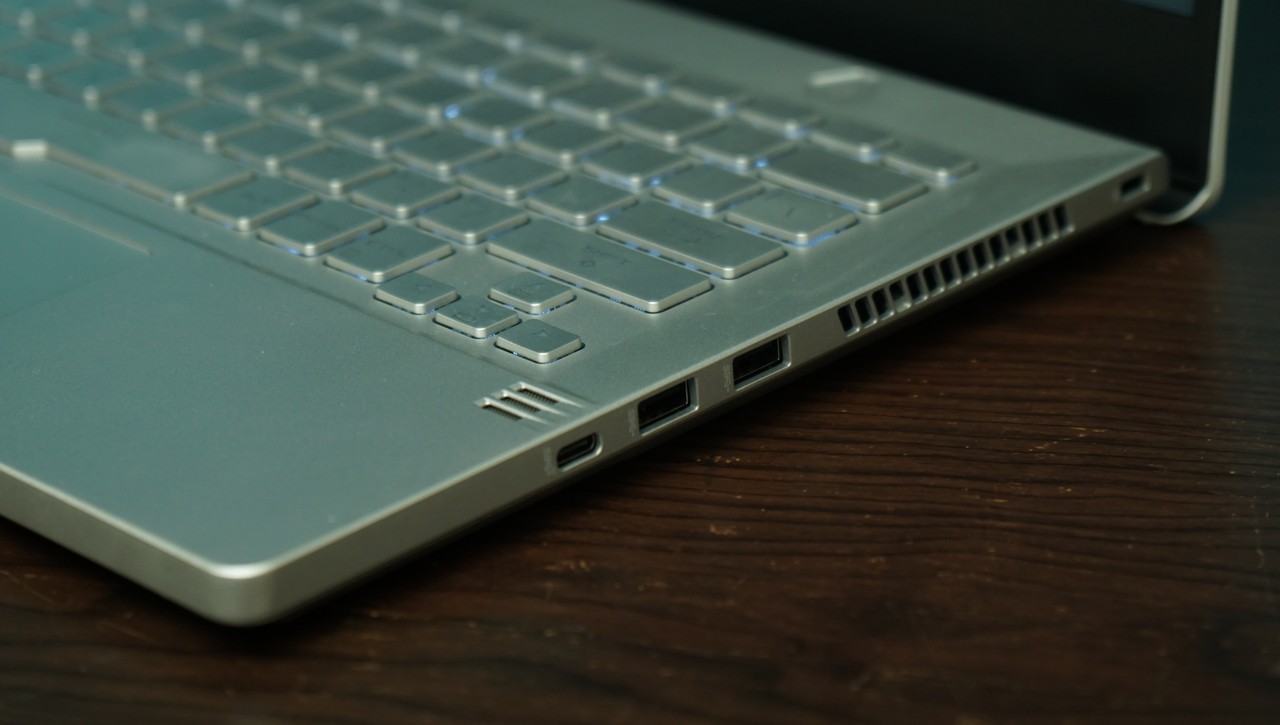 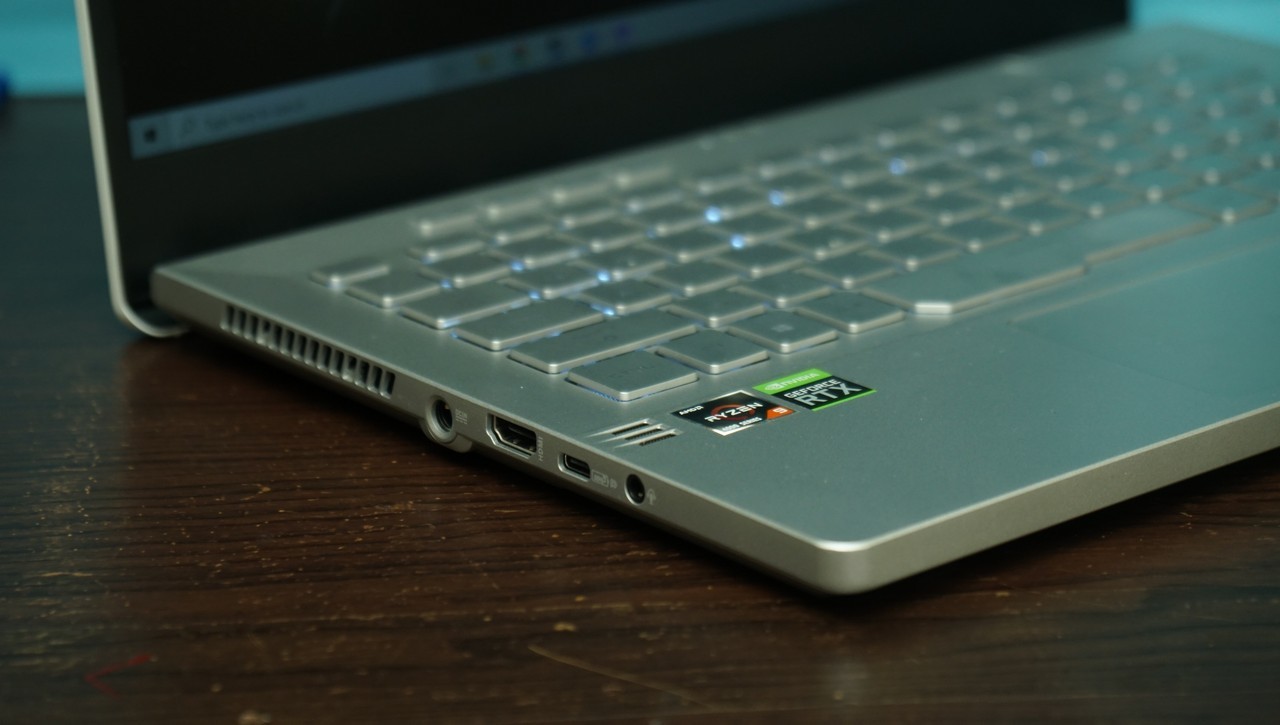 While the lid uses a “Moonlight White” colorway, the inside of the chassis sports a gray-silver coloration for its magnesium alloy chassis. As with the outside, there are no fancy RGB lights here – the notebook uses plain white LEDs for backlighting the keys. 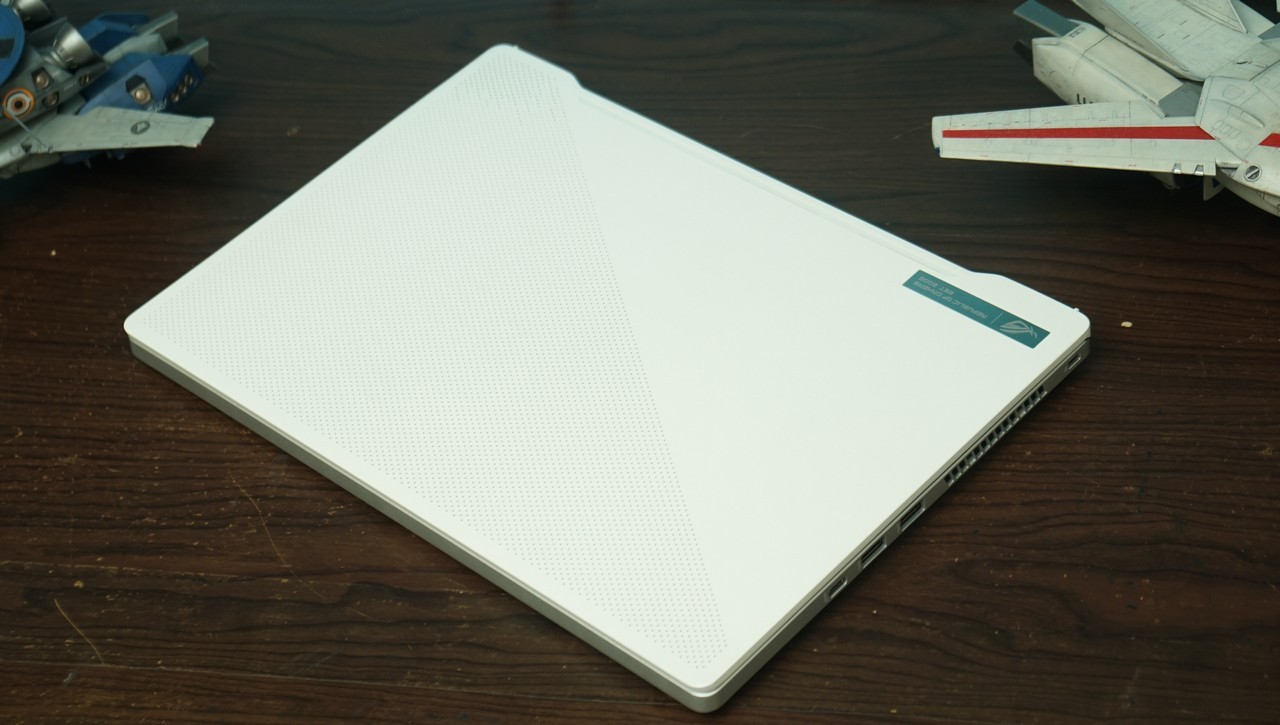 There’s a decent amount of ports on the side, which include a full-size HDMI port, two Type-C ports (with one doubling as a DisplayPort 1.4), two USB 3.2 ports and a 3.5mm jack for your headphones. 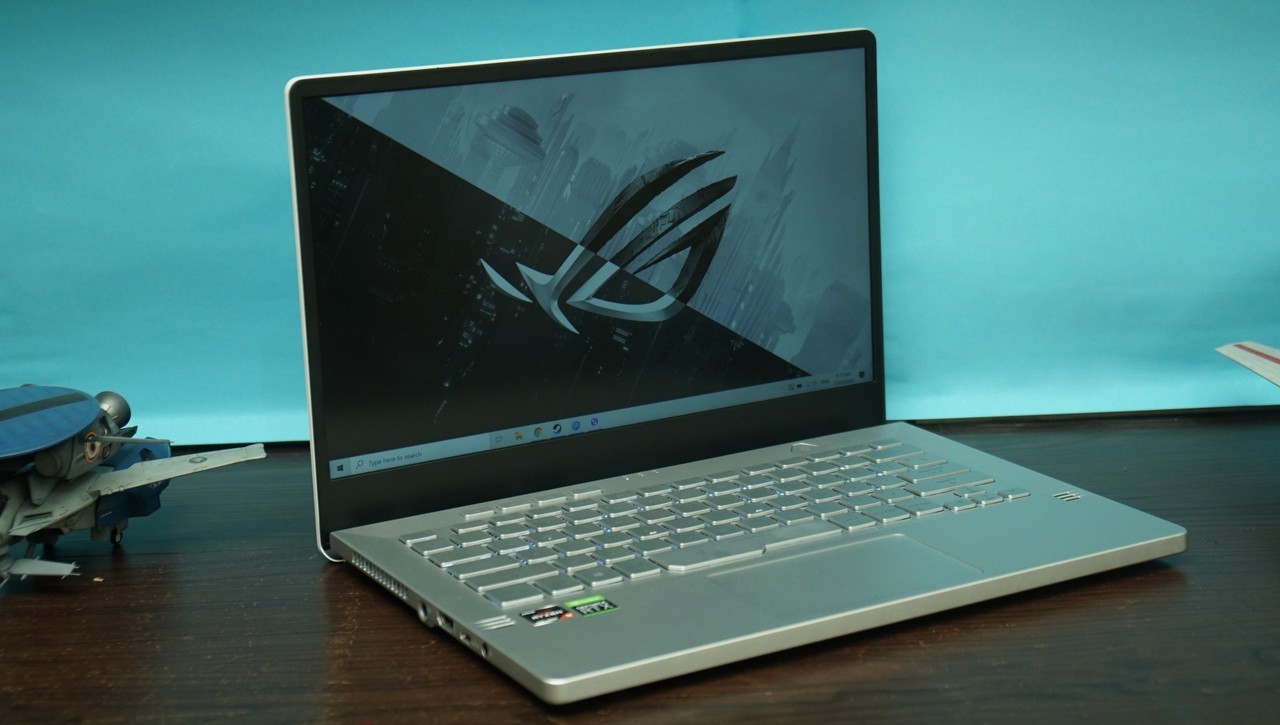 Color-accurate display for work and play

The Zephyrus G14 comes packing a full HD, 120Hz refresh-rate panel with AMD’s FreeSync, made to work with NVIDIA’s RTX 2060 Max-Q thanks to an update last year.

Aside from the fast refresh rate which comes in handy when playing in competitive games, the display is also color-accurate enough for serious work.

ASUS boasts 100% sRGB coverage, and as an added bonus the panel is also Pantone Validated as well, on top of all the other features we’ve already mentioned.

One slight niggle in the works is the fact that the Zephyrus G14 doesn’t have a webcam thanks to the really thin bezels on the notebook’s panel.

If you want to stream yourself playing on Twitch or video chat with friends using this notebook, you’ll have to pick up a separate webcam to go with it. 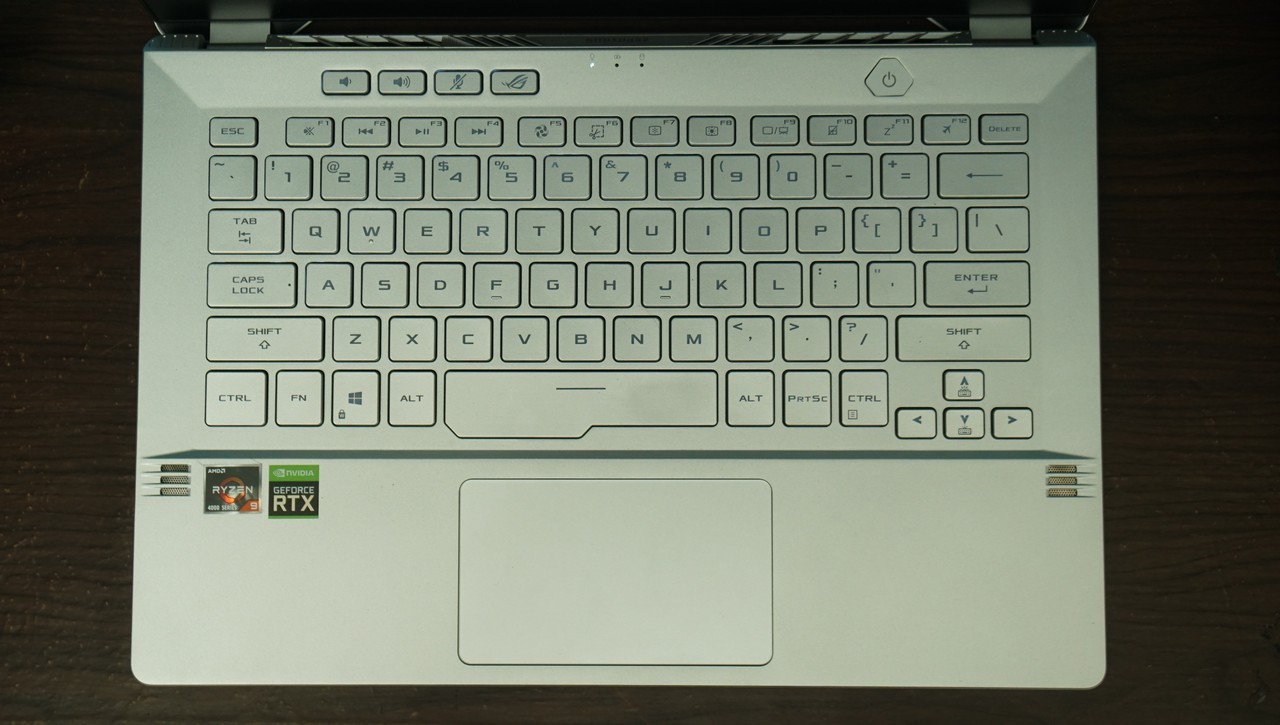 The keyboard feels nice to type on, but the backlight is atrocious

So, the good news first: the keys on the Zephyrus G14 are a joy to type on. They have excellent travel, they don’t feel mushy or weird and have decent actuation force. 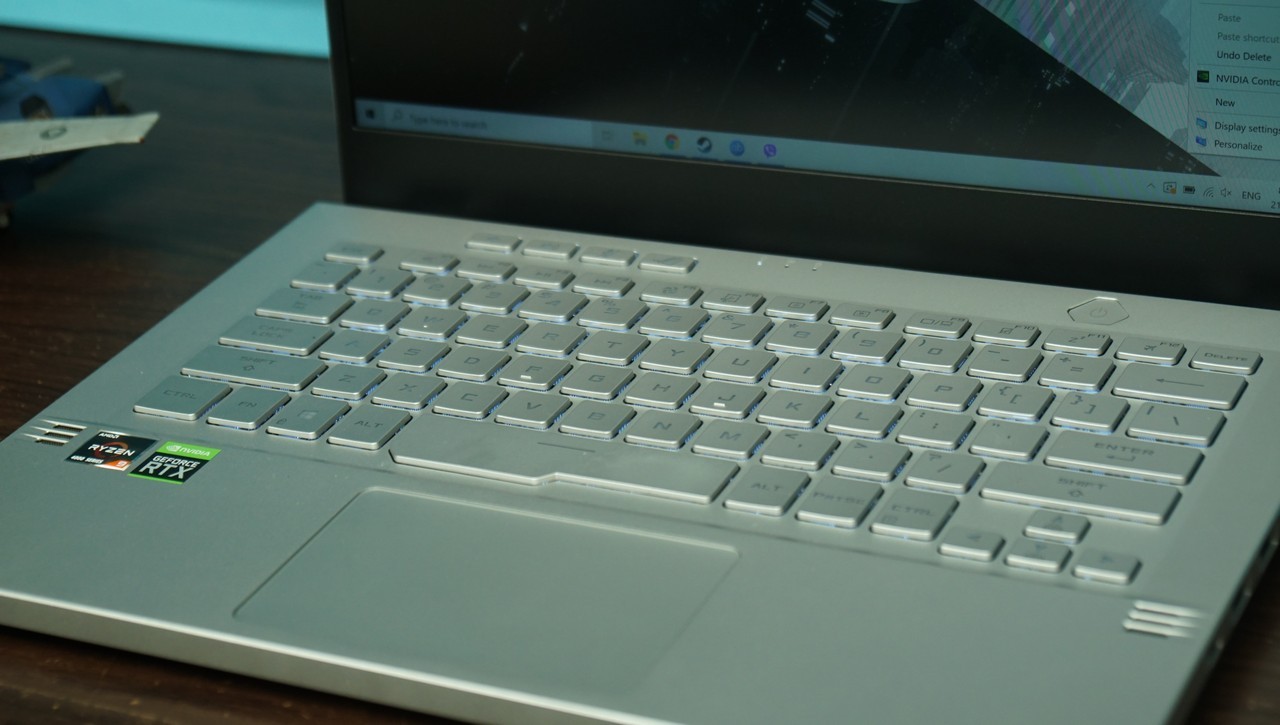 I’d probably prefer a bit more feedback, but overall they’re great to type on. I used it to type out this review and I wrote as fast as I usually do on my mechanical keyboard with the same amount of effort (and typing errors).

The touchpad is nice and wide, but like most touchpads nowadays you’ll probably ignore it and go with a separate mouse instead. The click is pretty shallow on it, and generally I usually tolerate it for a few minutes until I get annoyed and grab my Strix Carry.

Now, the bad news: the white backlight is incredibly bad. The LEDs don’t completely light up the keys, and there are certain areas in the keyboard (notably the T, Y, and U keys) that are barely lit up. I like the idea, but the execution here is terrible. 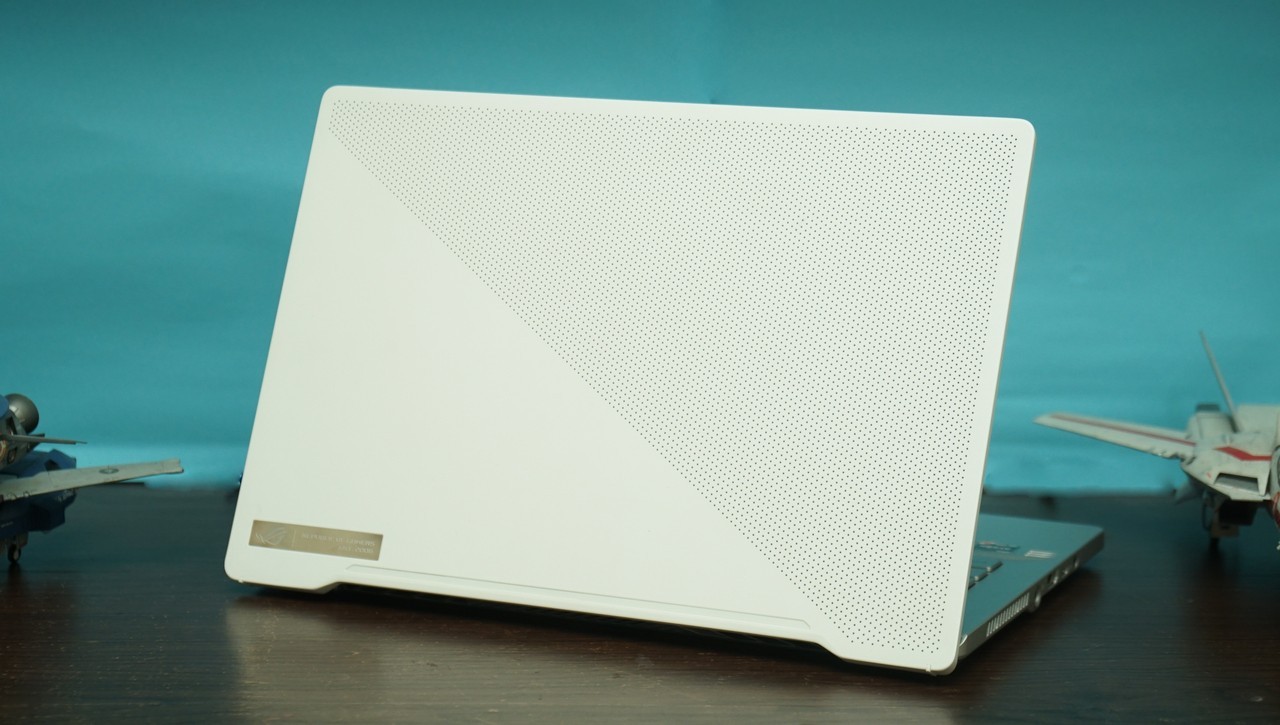 Powerful innards and long-lasting battery are a great combo

Like we mentioned earlier, the Zephyrus G14 comes packing AMD’s newest mobile processor, the Ryzen 9 4900HS. ASUS will also be offering the Zephyrus G14 with a relatively more sedate R7-4800HS and R5-4600HS as well in lower SKUs.

As far as RAM and storage go, the notebook can have up to 32GB of RAM and up to 1TB of M.2 NVMe PCI-E 3.0 SSD storage as well – it all depends on the configuration of your choice. 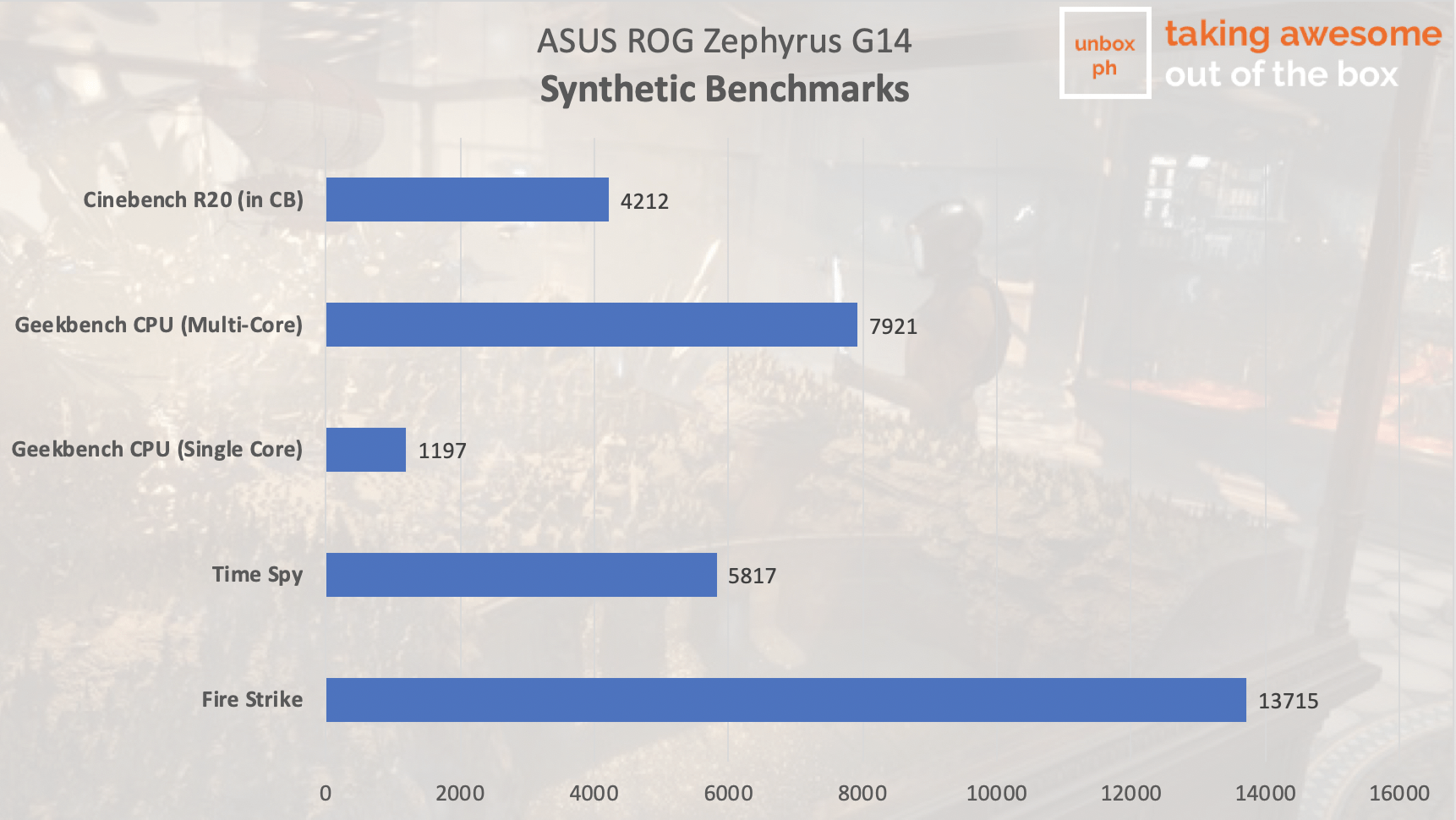 AMD’s powerful new processor family really made itself felt during our review, as it handily chewed up and spit out any and all tasks we threw at it without a sweat.

Transcoding 4K videos, running multiple Chrome tabs at once while alt-tabbed out of games, you name it – the Ryzen 9 4900HS can handle all of that without any problems at all.

AMD’s new processor is a godsend for anyone that does any kind of video and photo editing work, vastly speeding up rendering times compared to other alternatives on the market.

Let’s not forget that the Zephyrus G14 is a gaming machine too – it comes packing NVIDIA’s RTX 2060 Max-Q discrete graphics. Paired with the processor and top-tier hardware, the notebook had no problem posting excellent numbers in both synthetic and real-world benchmarks. 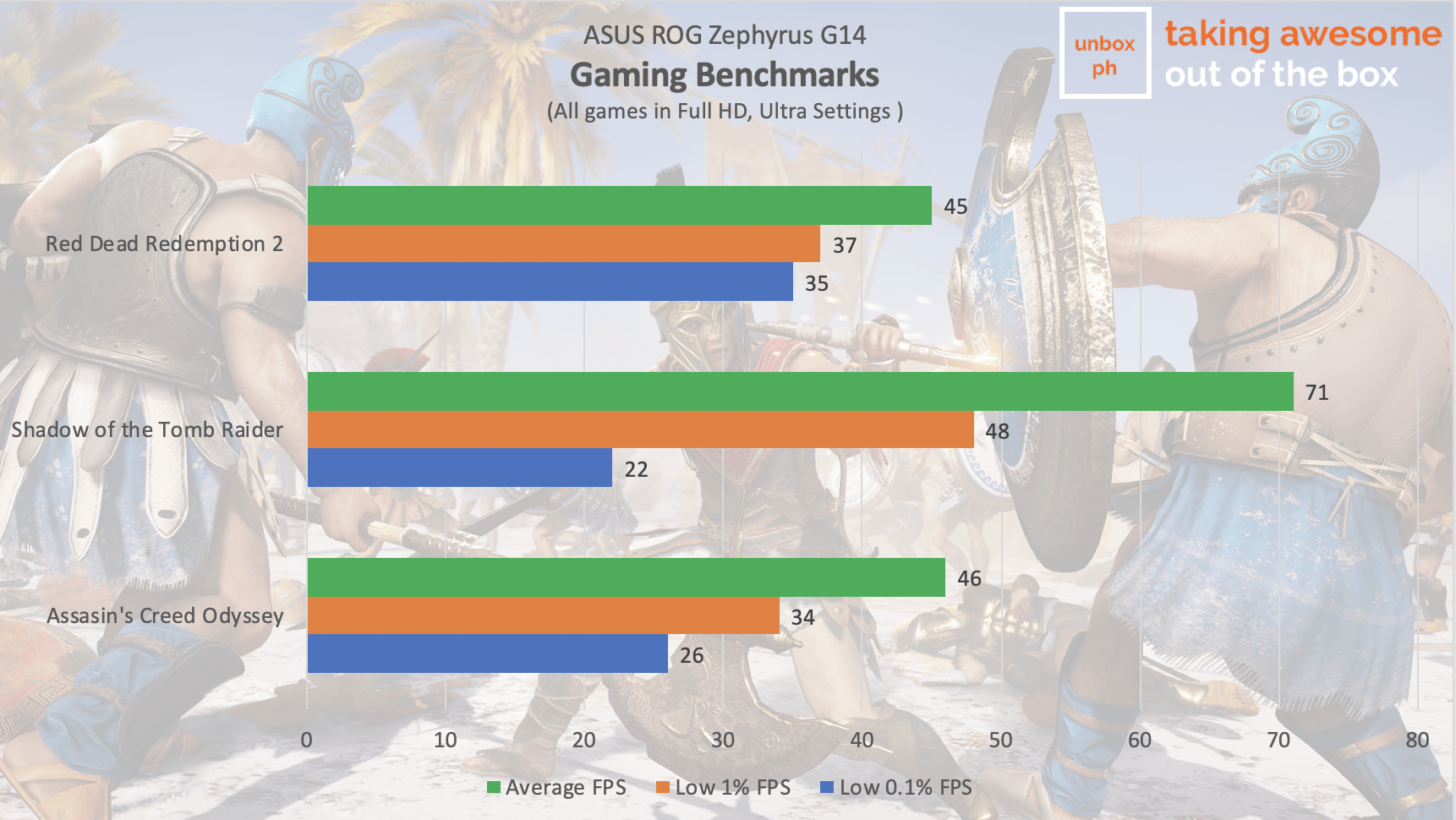 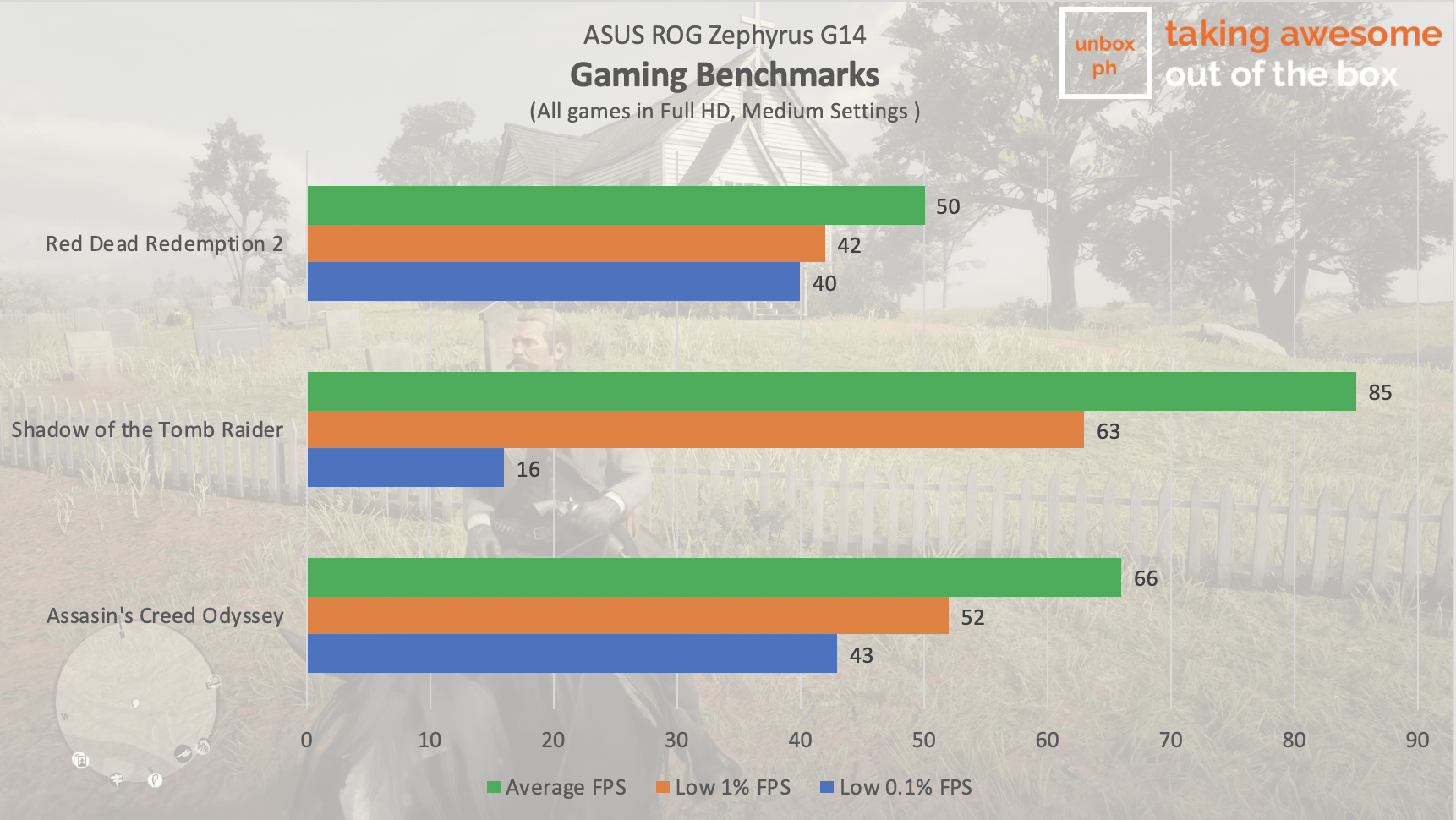 The only complaint I have is the annoying fans who get a touch loud under full load, but they seem to do their job as the notebook never really felt hot even as I was yeeting people left and right in Read Dead Redemption 2.

Probably the most surprising thing about the Zephyrus G14 is how long it lasts away from the power plug. Gaming notebooks are notoriously short-legged when it comes to battery endurance, no matter how thin and light they claim to be.

It looks like AMD has managed to crack that problem with their new processor and architecture, as the notebook returned an 11 hour and 56 minute run time, probably the best we’ve ever seen from ANY gaming notebook.

Obviously that’s going to be dramatically shorter when you’re gaming unplugged, but thanks to the notebook’s reasonable size and weight, you can actually use it as a general-purpose notebook and not just for gaming.

What’s even better is that ASUS made it so that you can charge the notebook via a smaller USB Type-C charger so you’re not lugging around the massive power brick with you when you’re (eventually allowed) outside. This makes the Zephyrus G14 a hell of a lot more versatile than most gaming notebooks out in the market today. 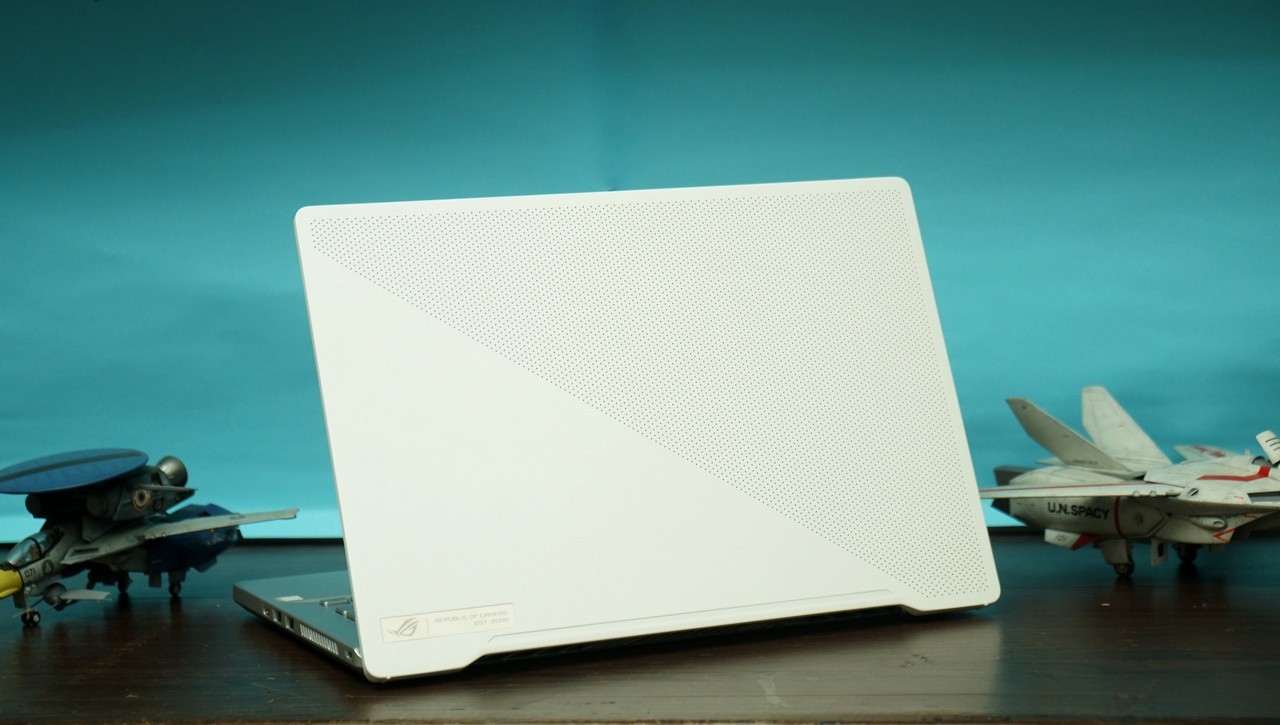 Verdict: A great notebook for all-around use, not just for gaming

Gaming notebooks are getting a hell of a shot in the arm with AMD’s new mobile processors. Forget leaving the Zephyrus G14 at home when you’re not gaming – this thing has enough battery life in it to double as a pretty capable work machine as well when you’re away from the socket.

The Zephyrus G14 is probably your best bet if you’re looking for a solid, do-it-all machine for work and for play, especially if you’re the sort that values a color-accurate screen as well as powerful innards.

The only thing that’ll stop you is its price – this thing isn’t cheap.

The cheapest variant of the Zephyrus G14 is priced at Php 89,995, and comes with a GTX 1660ti instead of an RTX 2060 Max-Q, half the RAM (8GB instead of 16GB) and no AniMe Matrix LED lights on the lid. If you really want that fancy animated lid you’ll be paying around Php 10K more for it.

The SKU that closely matches our review device is priced at Php 109,995, which means you’re really paying a premium for that RTX 2060 processor, though this particular variant already comes with the animated lid.

Here's the Pre-Order Promo for the VivoBook S14 M433 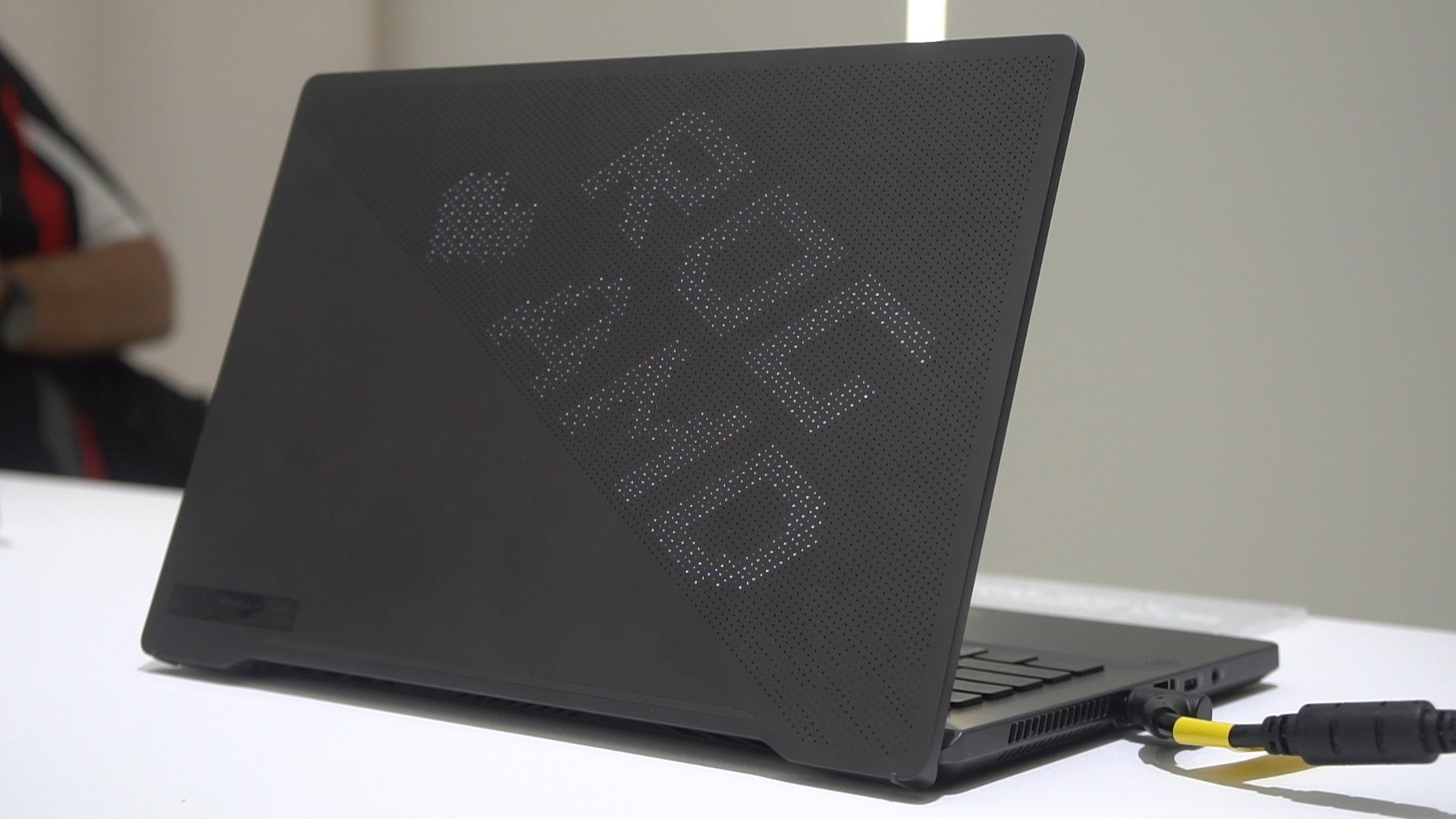 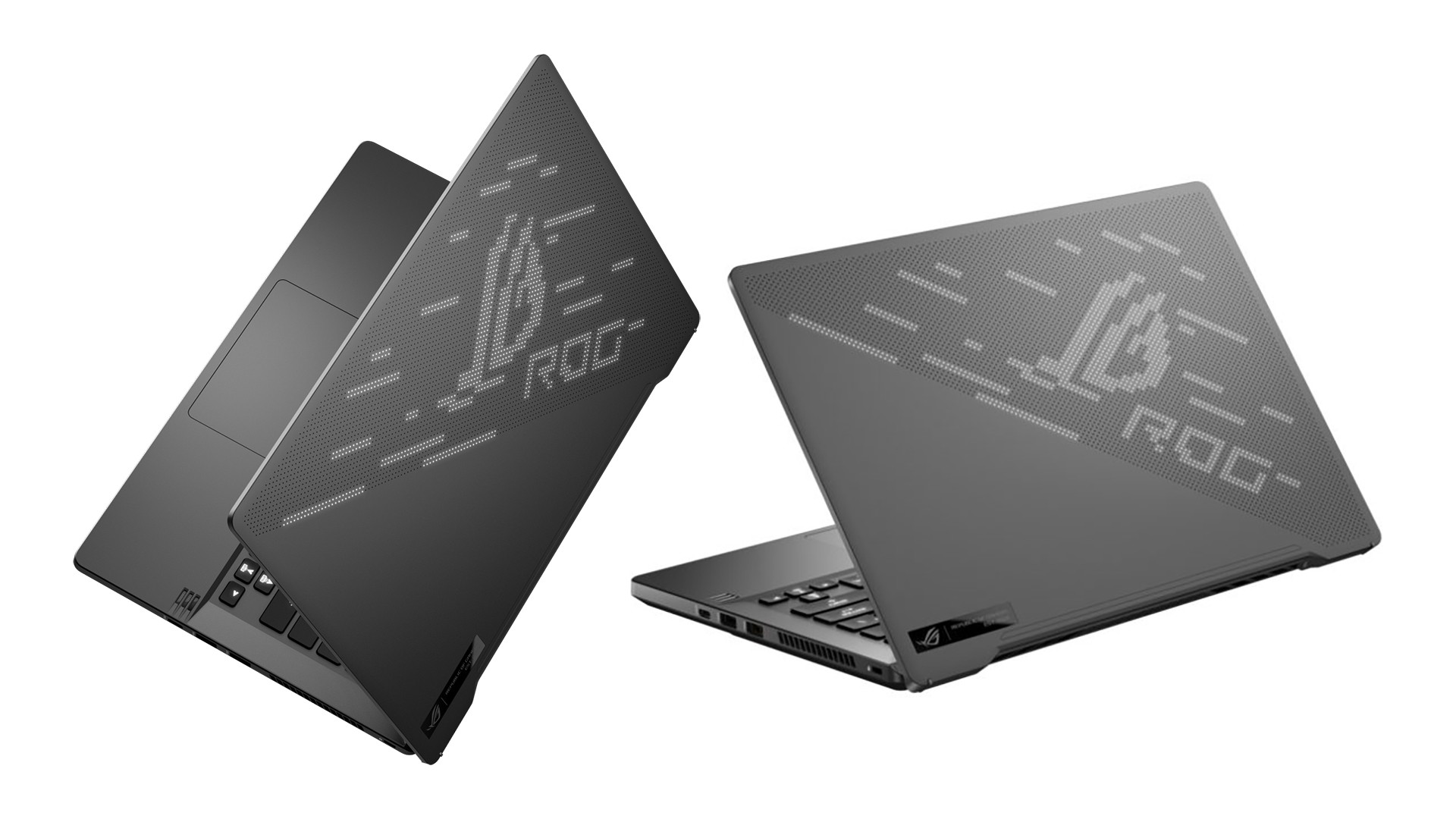