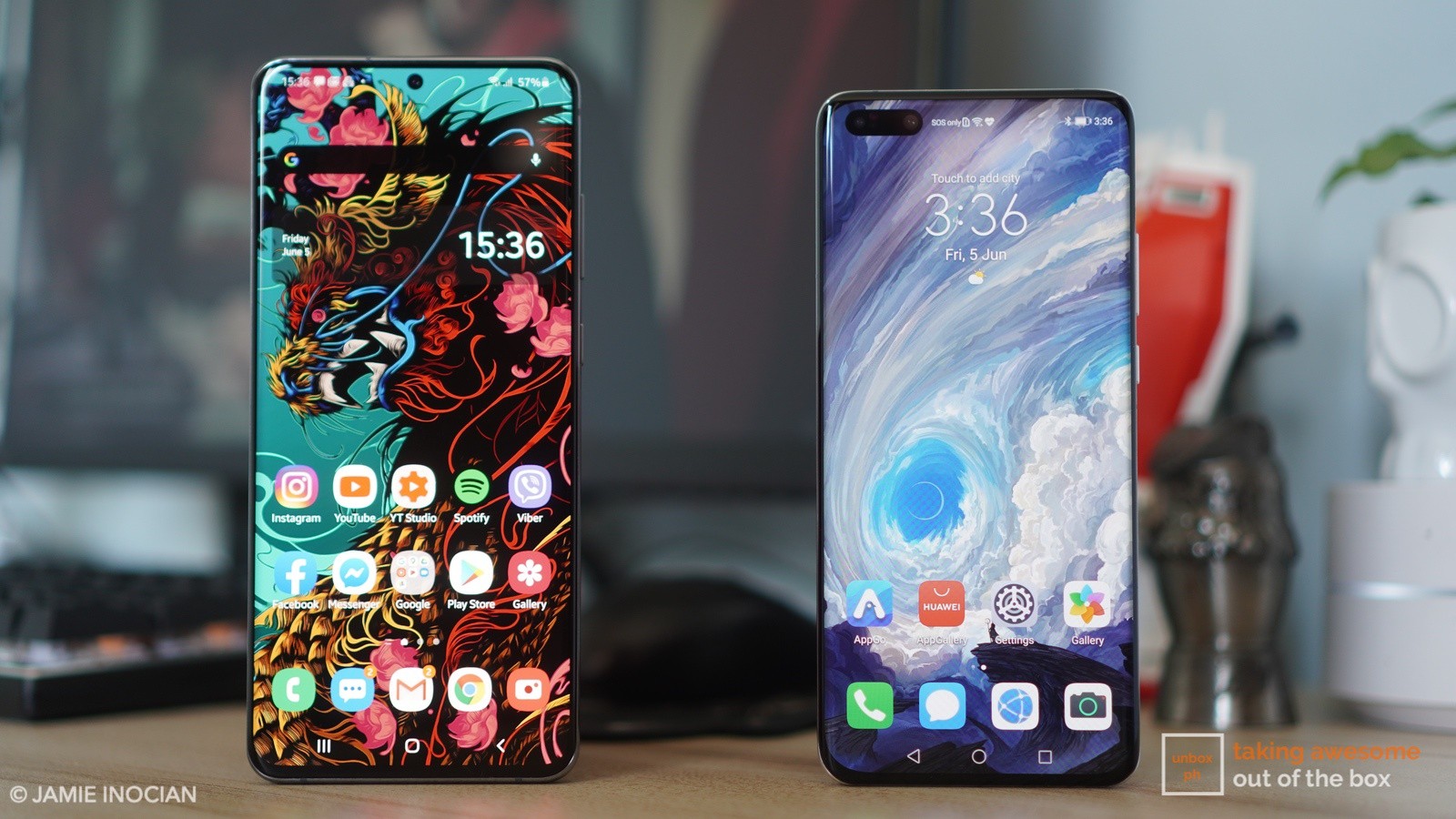 Which super zooming flagship should you buy?

Huawei has finally made their new flagship, the P40 Pro, available to buyers in the Philippines. For many people that are looking to upgrade to a flagship phone, the P40 Pro has a lot of things to offer, but so does its closest rival: Samsung’s new super-zooming variant, the Galaxy S20 Ultra.

But while the Galaxy S20 Ultra has a lot of things going for it, Huawei brought its A-game with the P40 Pro. The P-series has been the company’s photography showcase ever since its inception and has quickly become the favorite of both amateur and professional shutterbugs alike.

It’s a battle of flagship smartphones today – which premium flagship should you buy? 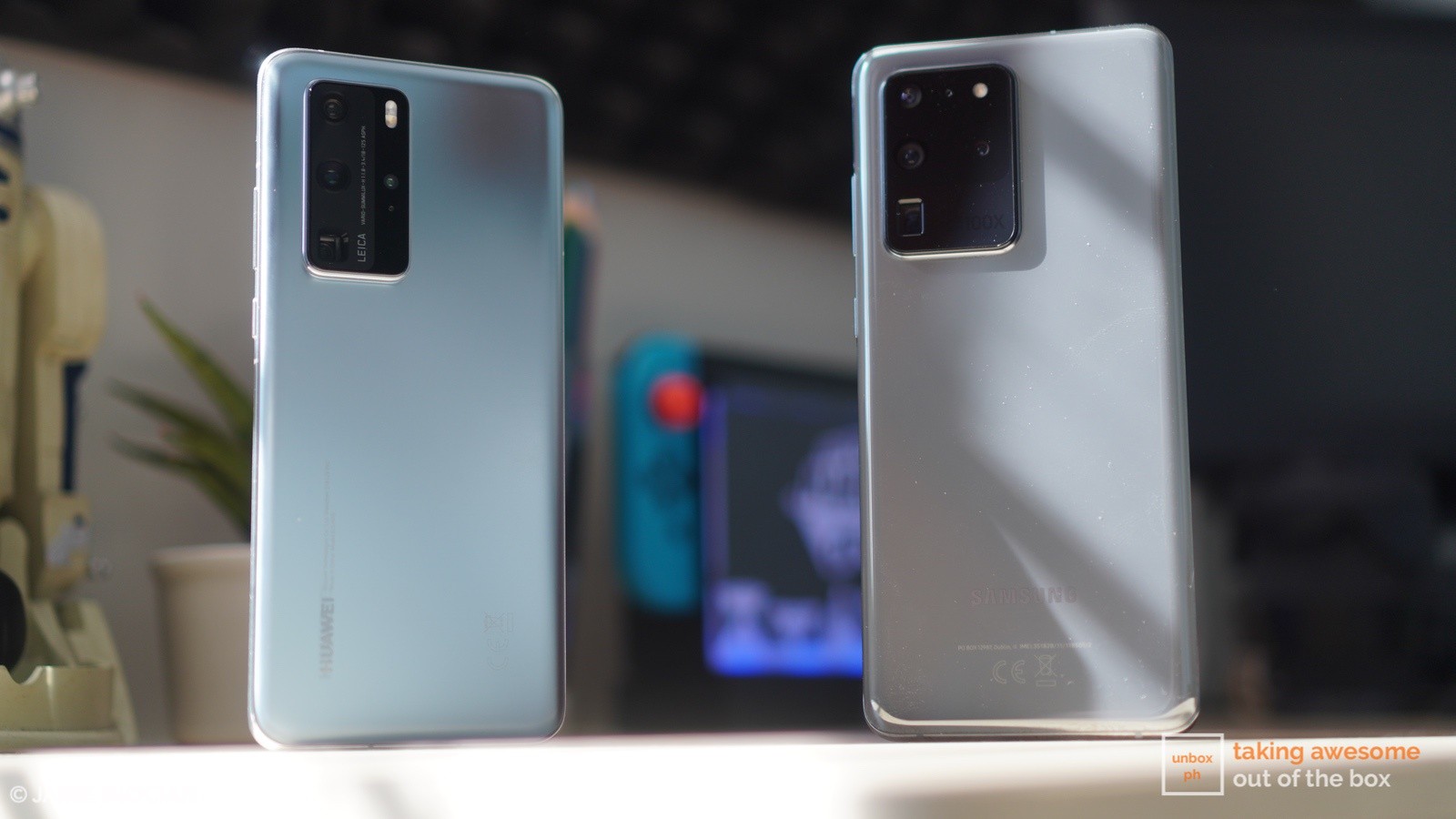 Similar design, but the small things add up

And while both phones use large, rectangular camera modules on the rear, the one on the Samsung Galaxy S20 Ultra is significantly larger. 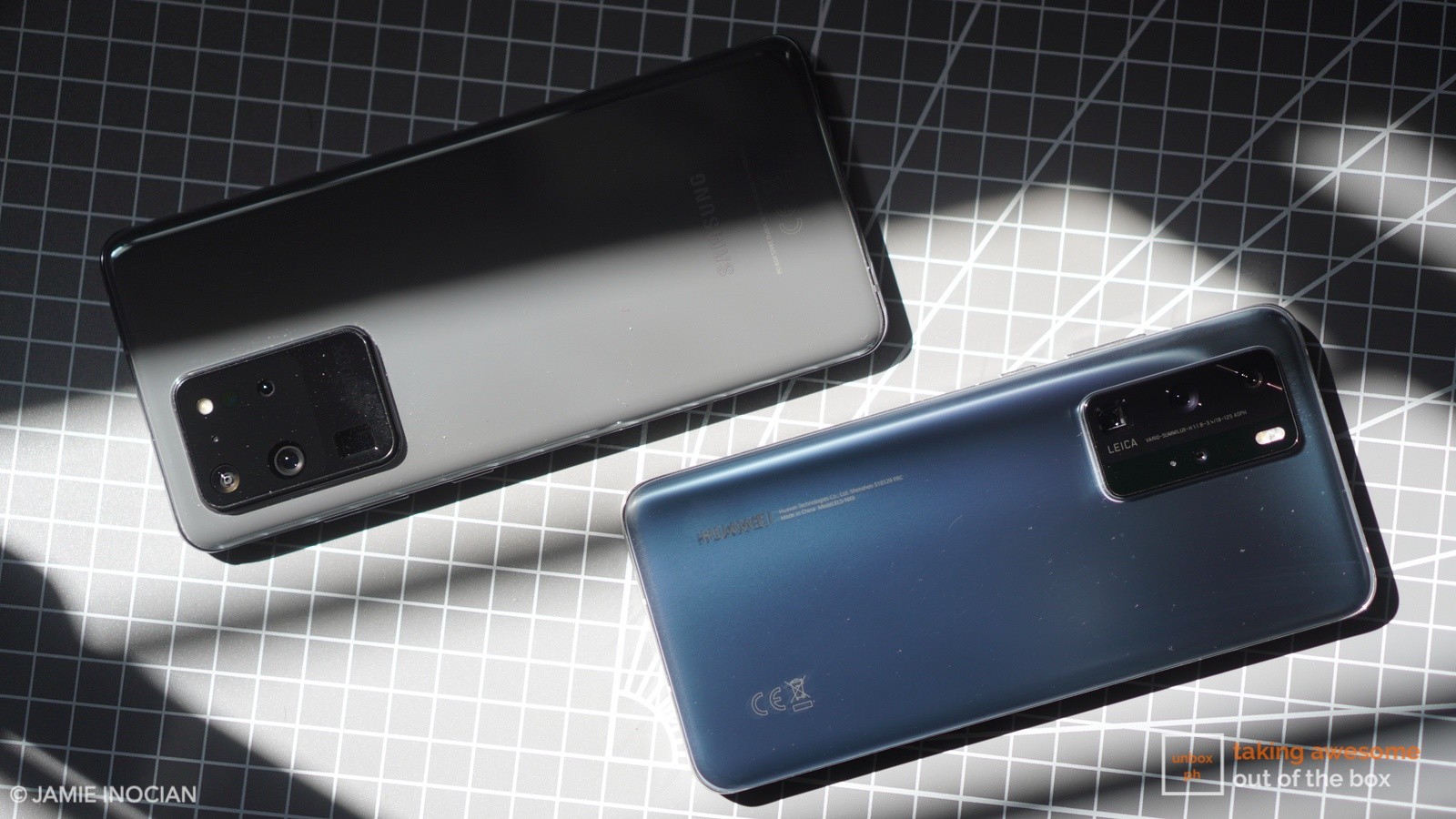 Curved displays are a given for flagship phones nowadays, and that’s also true for the two devices in this comparo. There’s a big difference in how the two devices handle curved displays though – while Samsung has gone the traditional route, Huawei utilized a new design that has the frame in the corners tapering into the display, which Huawei says mimics the way water looks before breaking water tension. 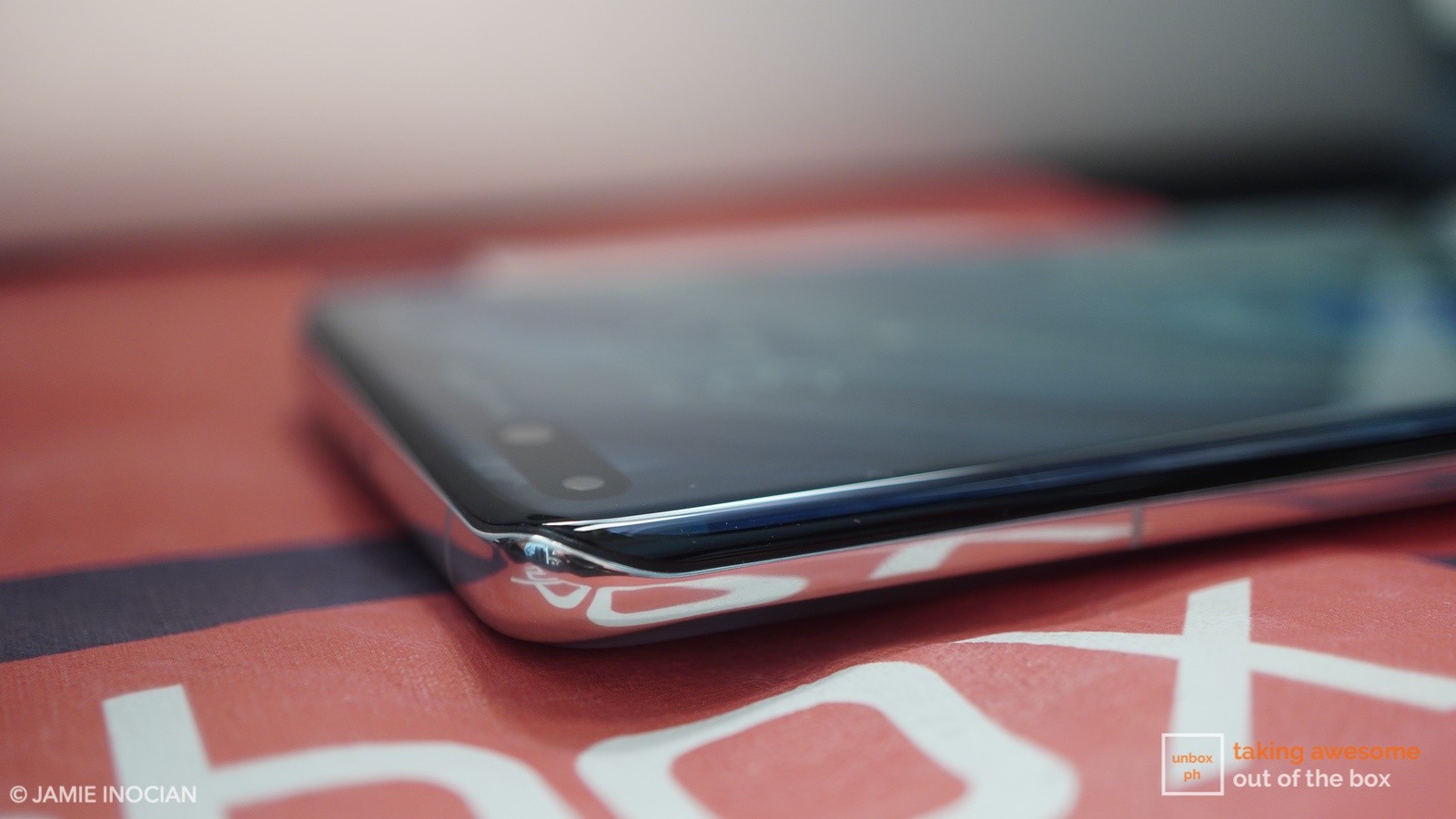 In terms of colorways, Samsung is only selling the S20 Ultra in two colors: Cosmic Black and Cosmic Grey. Huawei, on the other hand, comes in multiple color variants, including Black, Deep Blue Sea, Silver Frost, and Blush Gold. 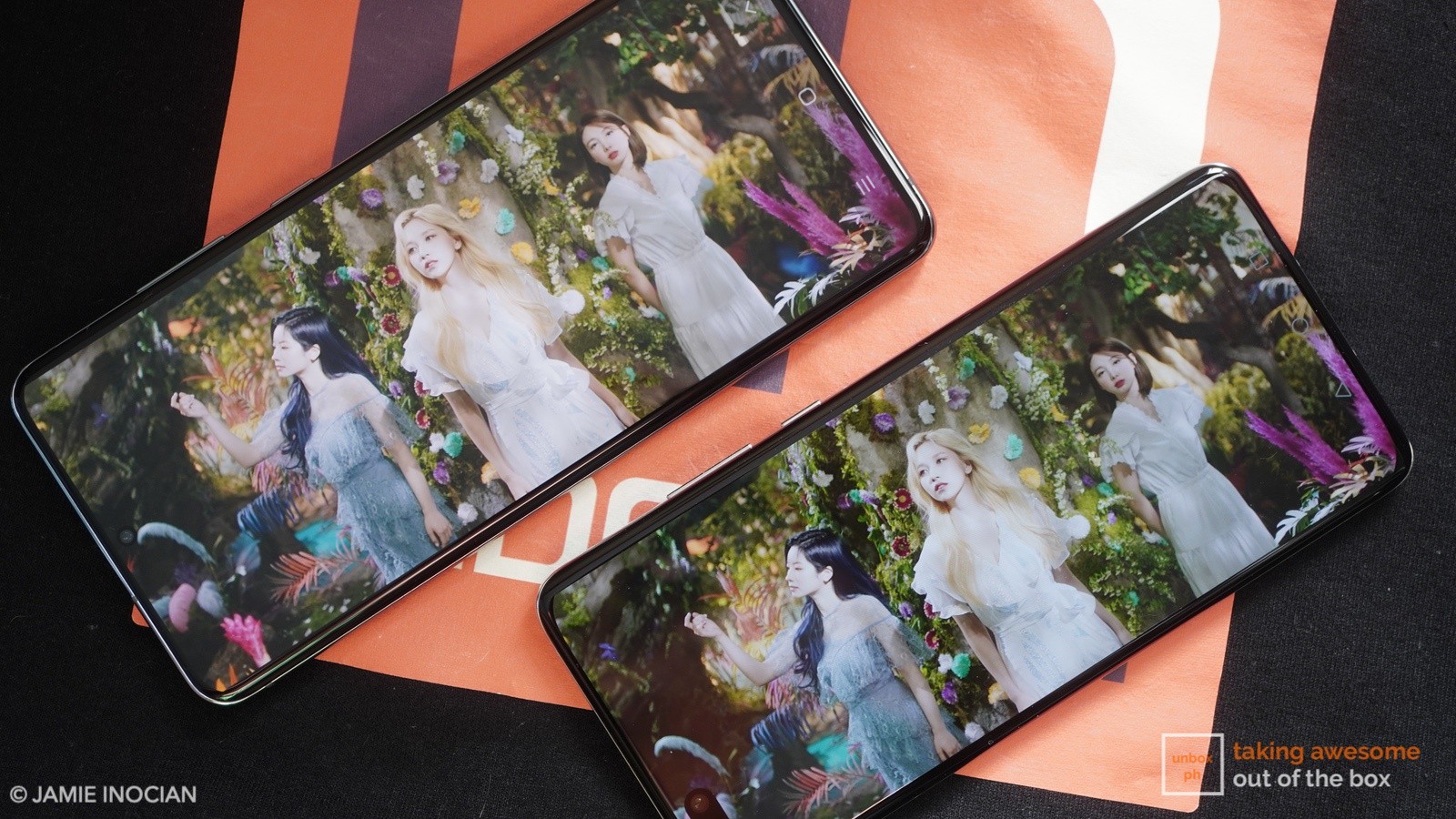 A tale of two displays

Samsung is one of the leading names when it comes to display technologies, so it comes as no surprise that the Galaxy S20 Ultra’s display has an advantage over the P40 Pro. It’s bigger at 6.9-inches VS the 6.58-inches of the P40 Pro, though that increase in screen size comes at the expense of one-handed usability since the S20 Ultra is so tall. 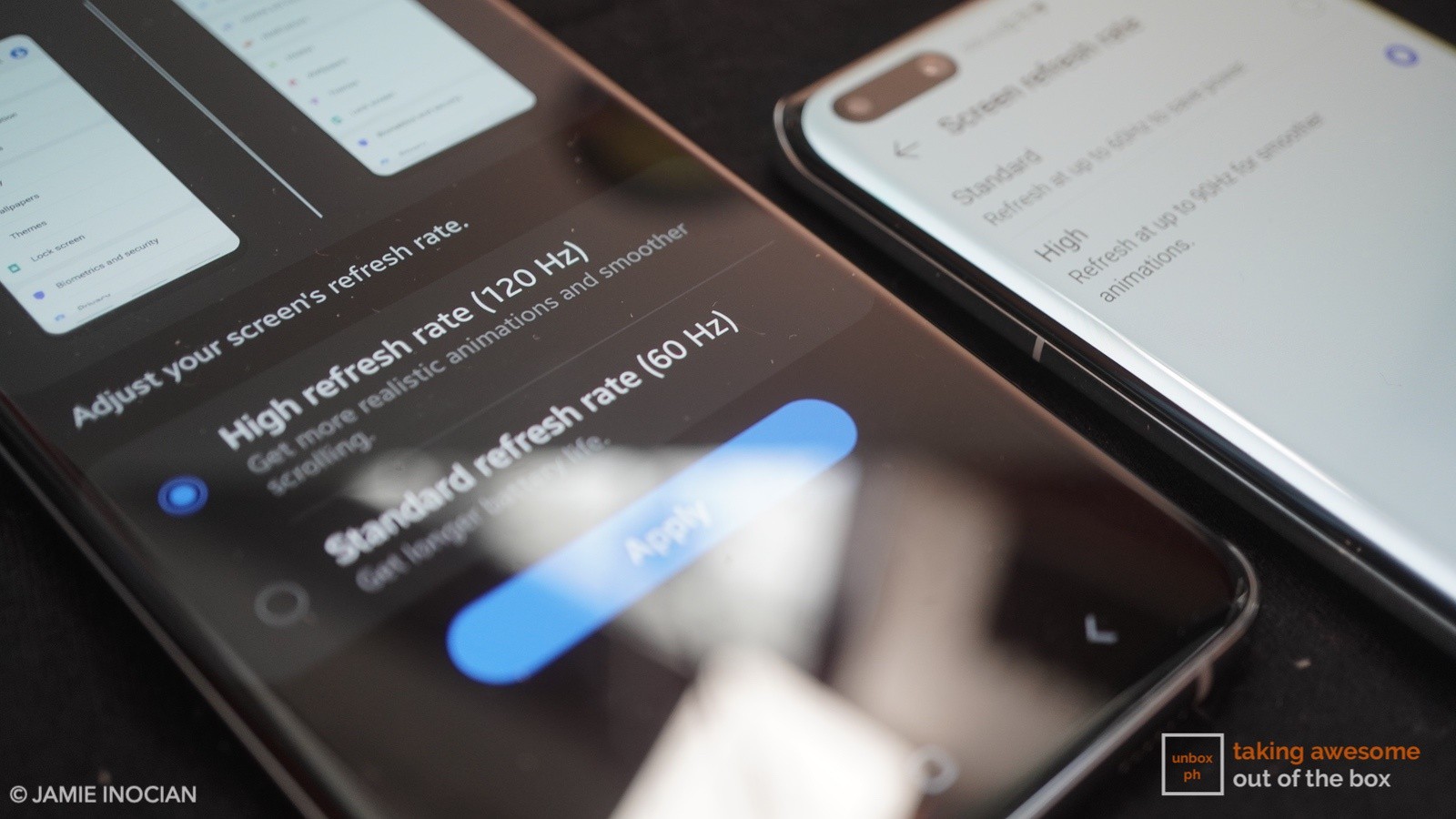 Huawei’s P40 Pro comes with a curved Overflow Display, the first such display in the world. The display simulates water breaking the surface on the corners, which adds additional visual flair to the phone’s overall design. That’s on top of the phone’s unibody construction and finish. 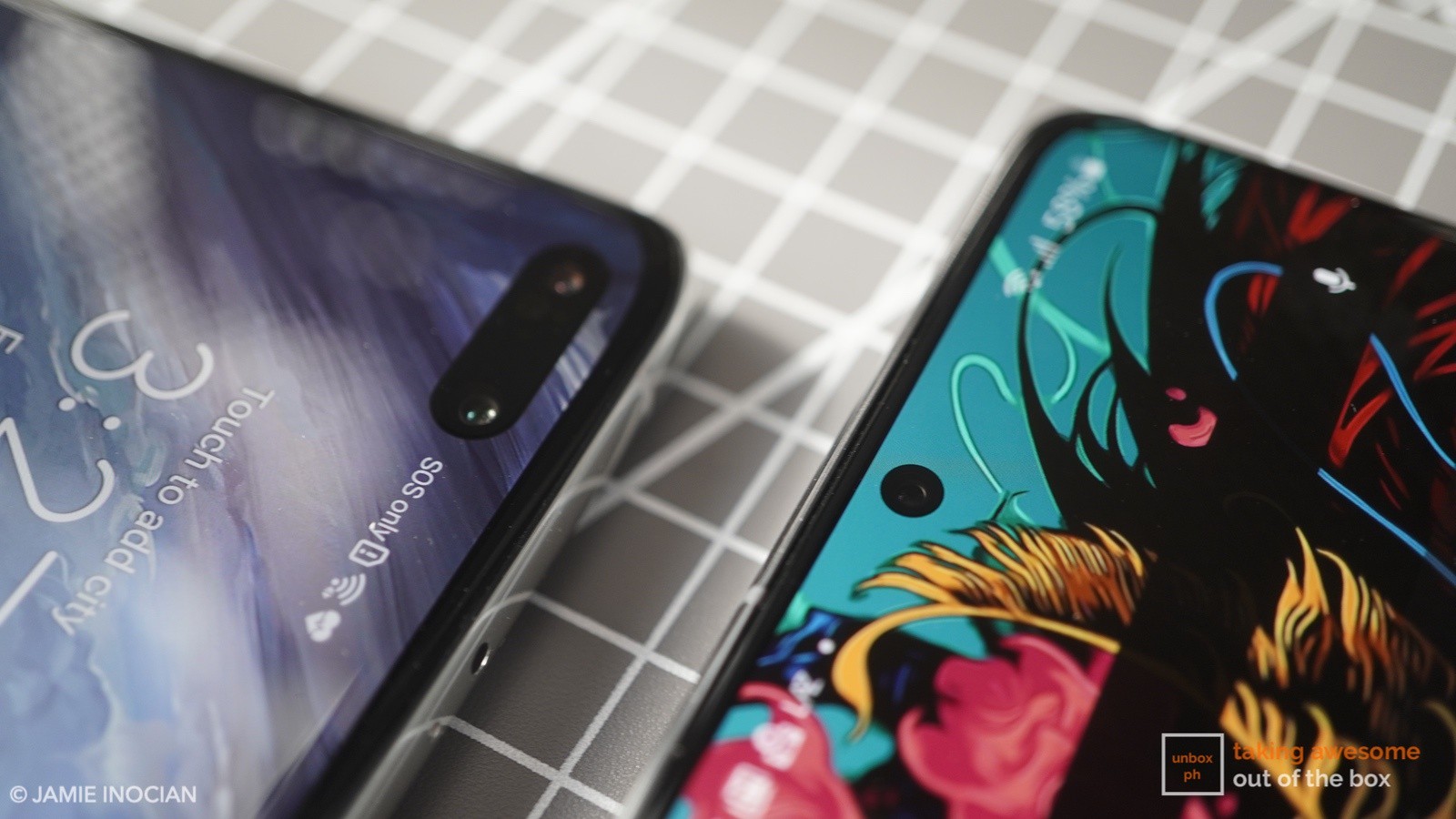 The Galaxy S20 Ultra has a faster 120Hz refresh rate panel VS the P40 Pro’s 90hz, but putting both displays side by side most users won’t see the dramatic jump in performance of a 90Hz panel VS a 120Hz one. A 120Hz panel also drains a phone’s battery faster, so there’s that too.

The Galaxy S20 Ultra goes with a hole-punch notch placed at the center top containing a 40-megapixel selfie camera, while the P40 Pro goes with a pill-shaped one with a 32-megapixel camera tucked at the upper left side of the display. We don’t have issues with either one as it boils down to user preference on what kind you prefer. Take note that the P40 Pro’s pill-shaped notch is pill-shaped for a reason: there are additional sensors thrown in there including an IR-depth sensor and a ToF sensor as well. 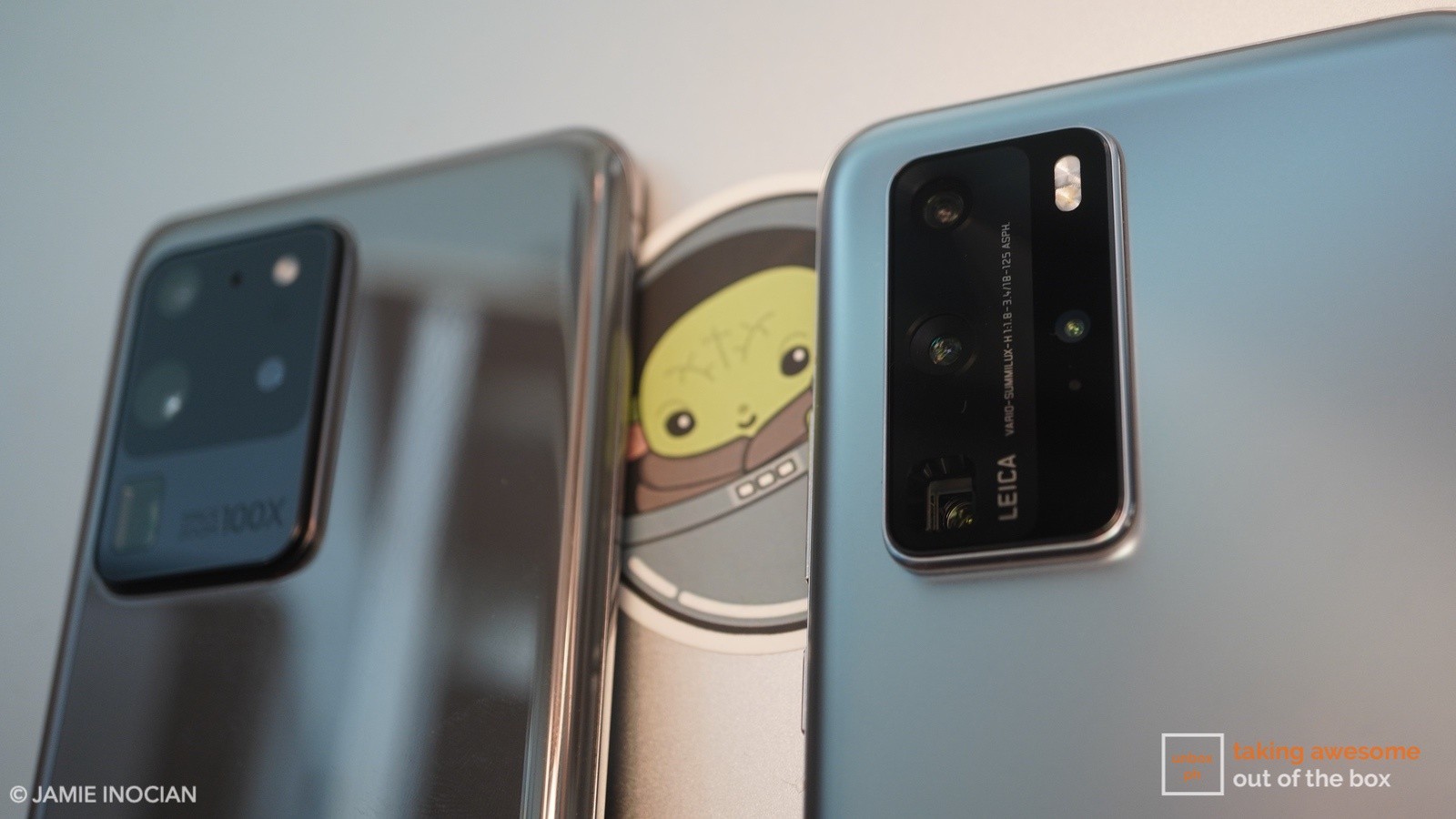 Samsung’s done with using 12-megapixel sensors in their flagships, at least for their high-end phones, and has equipped the Galaxy S20 Ultra with a 108-megapixel camera packed with OIS and dual pixel PDAF. That’s complemented by a regular 48-megapixel telephoto camera with a 10x optical zoom with OIS, 12-megapixel ultra-wide-angle camera with AF, and a ToF camera.

Aside from having a high-resolution sensor, the Galaxy S20 Ultra can also shoot up to 100x using AI software resulting in SuperZoom’d photos.

Powered by the Ultra Vision Leica Camera System, Huawei has taken a different route with the P40 series of phones. Instead of upping the megapixels in their phones, the company has physically increased the size of the camera sensor. Their P40 series of phones have huge, 1/1.28-inch sensors that take in more light when shooting. This 50-megapixel sensor dwarfs the one used in The S20 Ultra, as its sensor size is just 1/1.33-inches.

This massive 50-megapixel sensor is paired with a 40-megapixel Cine camera, along with a 12-megapixel SuperSensing telephoto camera with 5x optical zoom, and a ToF camera.

Interestingly, the optical zoom camera of the P40 Pro also comes with RYYB CFA tech, which is essentially the same technology that Huawei used on the P30 Pro last year.

Additionally, the phone also has OIS, AIS as well as directional audio zoom that allows you to zoom in on an audio source and amplify its sound at the same time. That’s on top of Huawei’s established technologies like AI-powered backlit shots as well as stunning night portraits.

And while the S20 Ultra takes great photos even in low-light conditions, the P40 Pro is superior in almost every way, capable of resolving images taken in incredibly dim lighting situations that Samsung’s flagship cant’ match. Huawei’s AI technology that drives the camera experience on the P40 Pro allows users to shoot long-exposure shots hand-held for as long as 6 seconds or more, resulting in truly breathtaking images no matter the lighting condition. 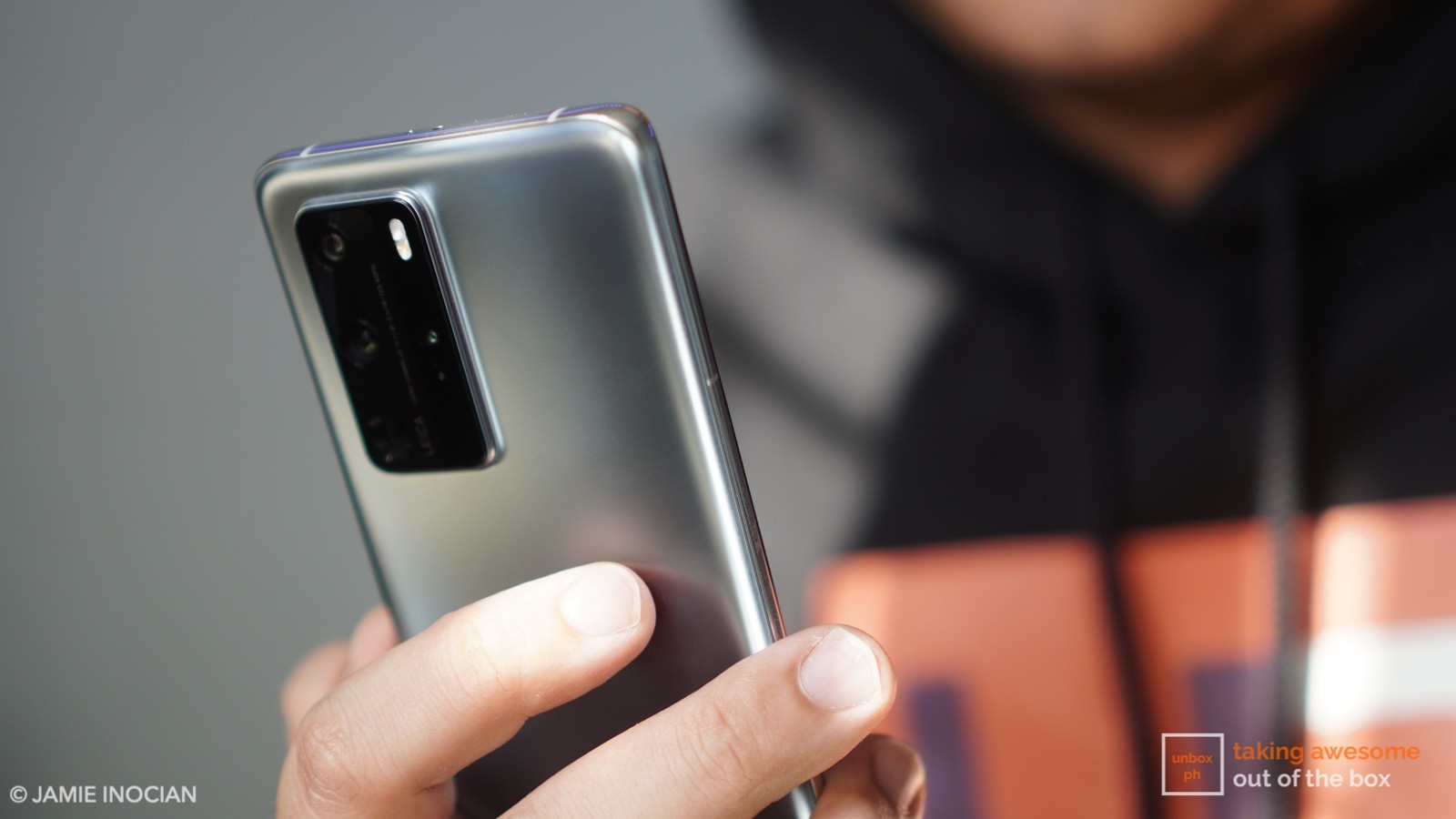 Flagship guts on the inside

Flagship phones deserve flagship guts: both phones sport top-of-the-line chipsets made by Huawei and Samsung in the form of the Kirin 990 5G and the Exynos 990.

Both phones perform incredibly well when it comes to gaming, and both phones are capable of handling whatever apps you throw at them.

While 5G is still a nascent technology in the Philippines, only the P40 Pro can take advantage of the new mobile standard as soon as it’s taken out of the box. While the Galaxy S20 Ultra can theoretically hop on to 5G, Samsung has stated that PH units will need to be issued a software update before that happens.

Both phones use Android 10, although thanks to the ongoing spat with the US government, the P40 Pro won’t ship with Google Play. You’ll still be able to install apps and software via HMS and AppGallery, and we’ve written a dedicated article on how to download and install your favorite apps, including Facebook and Facebook Messenger as well as all the latest games, banking apps and local apps in an article here.

Huawei also included a few additional features in the P40 Pro, thanks to the company’s EMUI 10.1 OS based on Android 10. There’s MEETime, which allows for high-quality video calling and screen sharing, as well as Cross-Device Photo Gallery which aggregates all media saved across Huawei smartphones and tablets running EMUI 10.1.

Battery life is mostly the same between the two phones

As far as battery life goes, both devices have roughly the same battery endurance: the P40 Pro clocked in an 11 hour and 5 minutes run time with PCMark’s battery benchmark, while the S20 Ultra came in at 11 hours and 39 minutes.

Those are pretty close numbers, which is surprising considering that the Galaxy S20 Ultra has a bigger 5000mAh cell compared to the 4200mAh that’s on the P40 Pro. 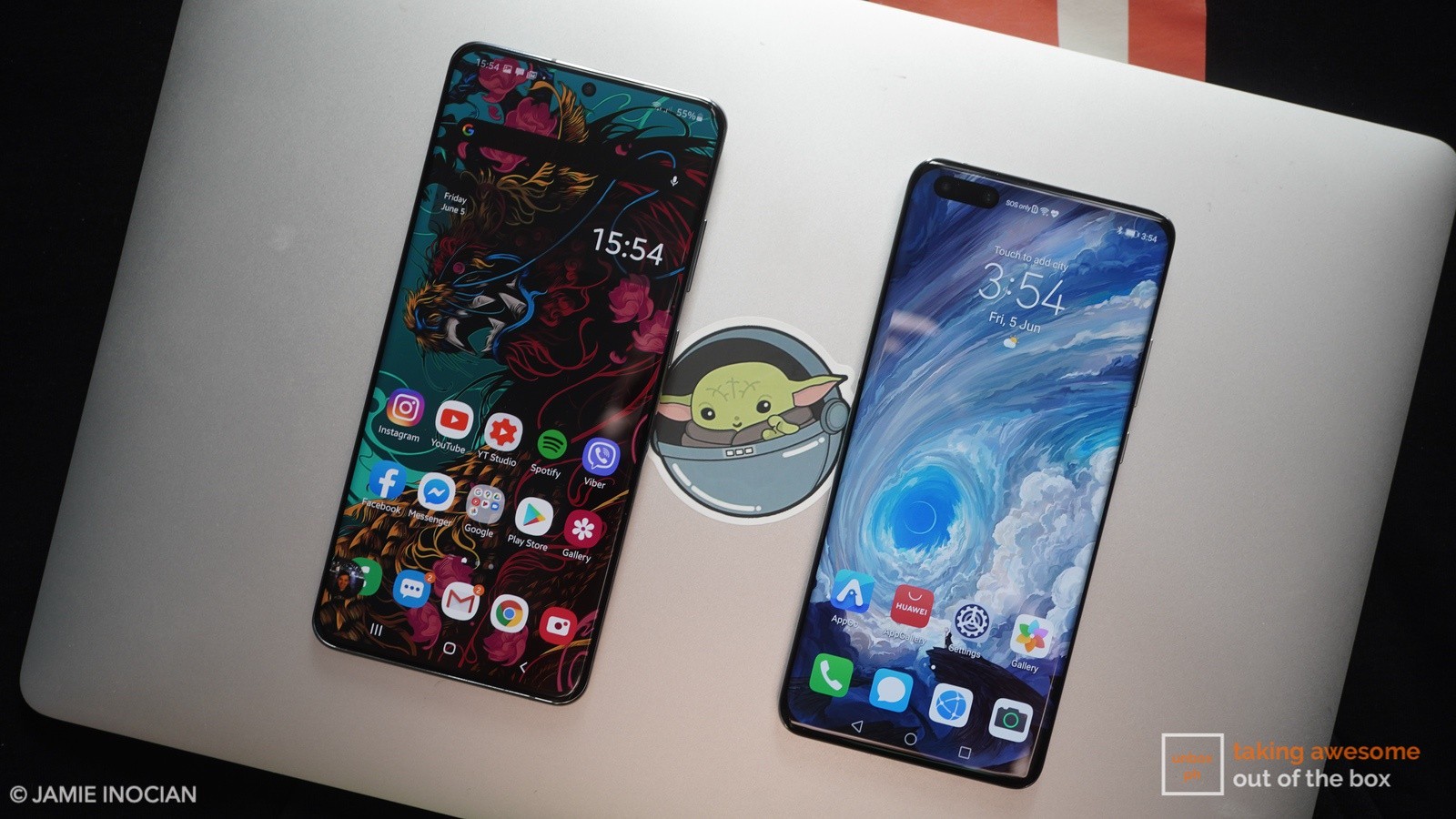 Verdict: the P40 Pro is the camera champ

Looking at the price, it’s clear that the P40 Pro is the natural choice if you’re looking to make the most out of your money. There’s a large pricing gap for the two phones as it stands today: the P40 Pro is priced at Php 50,990, while the Samsung Galaxy S20 Ultra is priced at Php 69,990, significantly more than Huawei’s new camera monster.

Upgrade Your Home with These Smart Home Gadgets (Pricey But Fun)