Since Barbie was first introduced in 1959, she has evolved with the times. At first, she was this blondie with teeny tiny waist and more recently; Barbie dolls have become more diverse coming in different nationalities, colors and sizes. Since then, she has become a lot of things – a sk8er, the president, the vice president, an astronaut and even a mermaid. But now on her 58th birthday, Barbie has become a hologram – a talking one at that.

The Hello Barbie Hologram projects Barbie in a small box. The toy uses a 2-D projection of a 3-D animation. Because of this, she can’t be seen in 3D; and can be viewed in front but not at the back.

Wake her up by saying “Hello Barbie” and the iconic gal we know so well comes to life. Just like your best bud, she can talk fashion (yes, she changes outfits) and dance with you as you choreograph her routine. She does other things too like set alarms, act as nightlight and check the weather. Oh and you can chat with her because she uses Amazon Echo to respond to voice commands.

There have been some privacy concerns regarding the Talking Barbie Hologram. Since it will be mostly used by children (although I highly suspect some full grown women getting their hands on this toy as well), who will get access to the data collected? Mattel, the maker of Barbie, answered this by saying that the voice recordings will not be saved and that it is designed to meet the requirements of the Federal Trade Commission regarding children’s online privacy.

For now, Hello Barbie is only a prototype that appeared in Mattel’s booth at the American International Toy Fair in New York. However, it is expected to be out for sale later this year. While there is no formal SRP yet, it is estimated to cost less than $300. 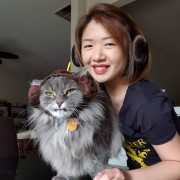