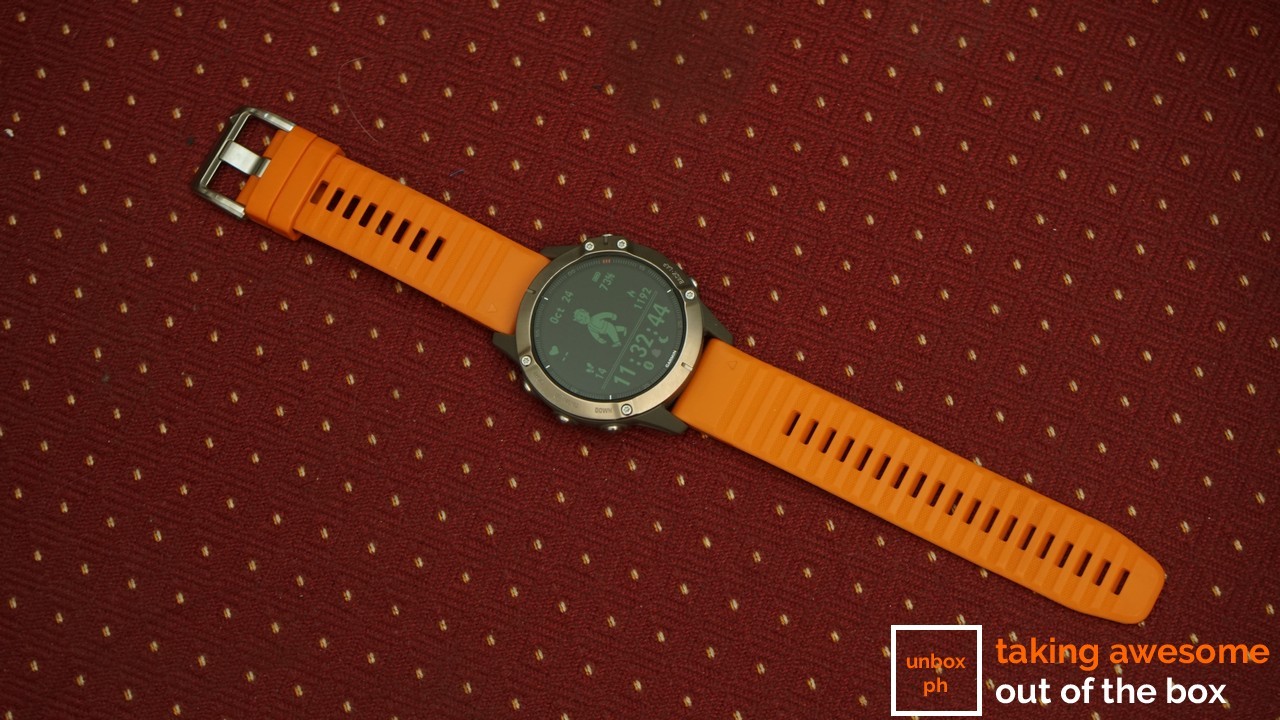 While Fitbit is the household brand that many people associate with fitness trackers, there’s one company that many serious athletes and fitness buffs rely on: Garmin. The brand’s wearables regularly grace the wrists of marathoners, triathletes and anyone serious about their sport, and for good reason—their wearables allow users to track a large swath of statistics that can make or break a race weekend.

Their new Fenix 6 is the best multi-sport smartwatch that they’ve ever made, giving users an ungodly amount of data to track to better help them train and compete. It’s a bit much for sedentary tech reviewers like me, but for people who take fitness seriously, it’s a godsend. 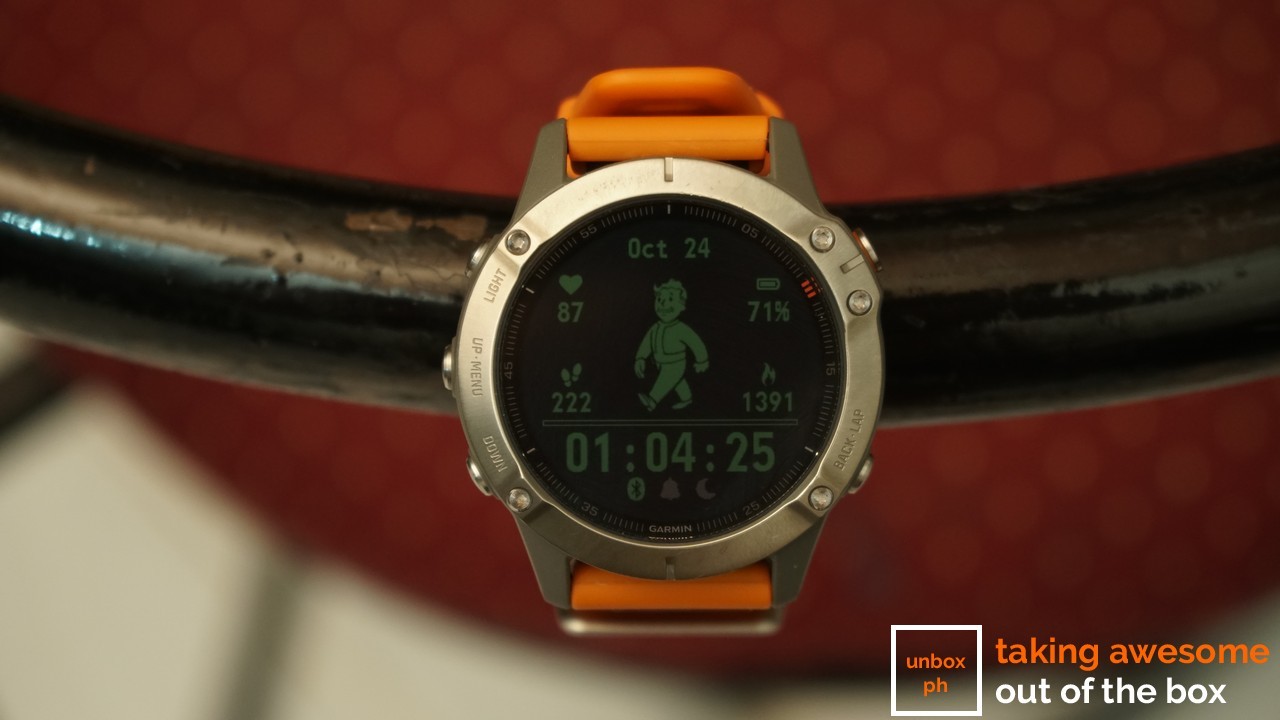 Garmin made sure to cover a large portion of their customer base by creating multiple versions of the Fenix 6. The watch comes in several sizes from 42mm, 47mm to 51mm, and has Pro and Base variants as well as a variant that has solar panels built into the watch face. Our review unit is the Fenix 6 Pro Sapphire, which has a 47mm watch face and Sapphire glass protection for the display.

The Fenix 6 isn’t a stylish wearable. It’s big and bulky and is thicker than most wearables I’ve tested on the site. It isn’t meant to be stylish though – crammed into the body of the watch are all of the sensors necessary for the target demographic, as well as a bigger battery. The chunkier design also means that the Fenix 6 is tougher than your usual smartwatch, which is pretty important considering who the demographic is. 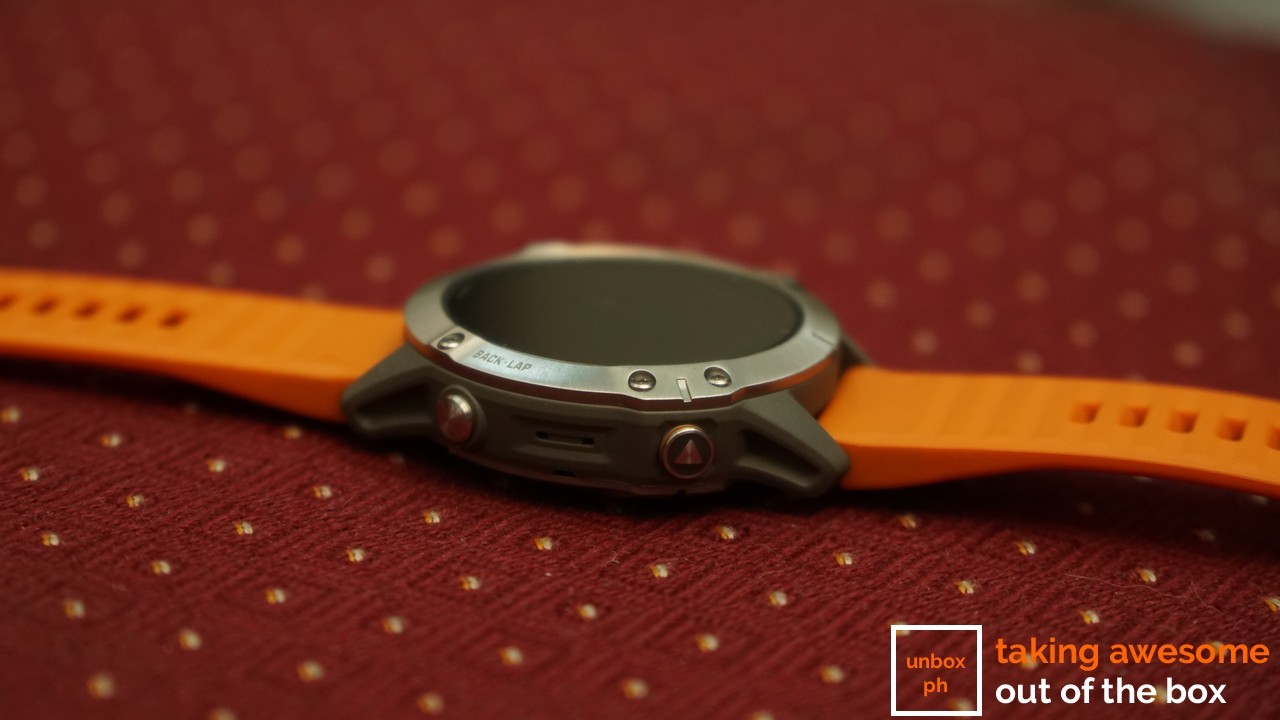 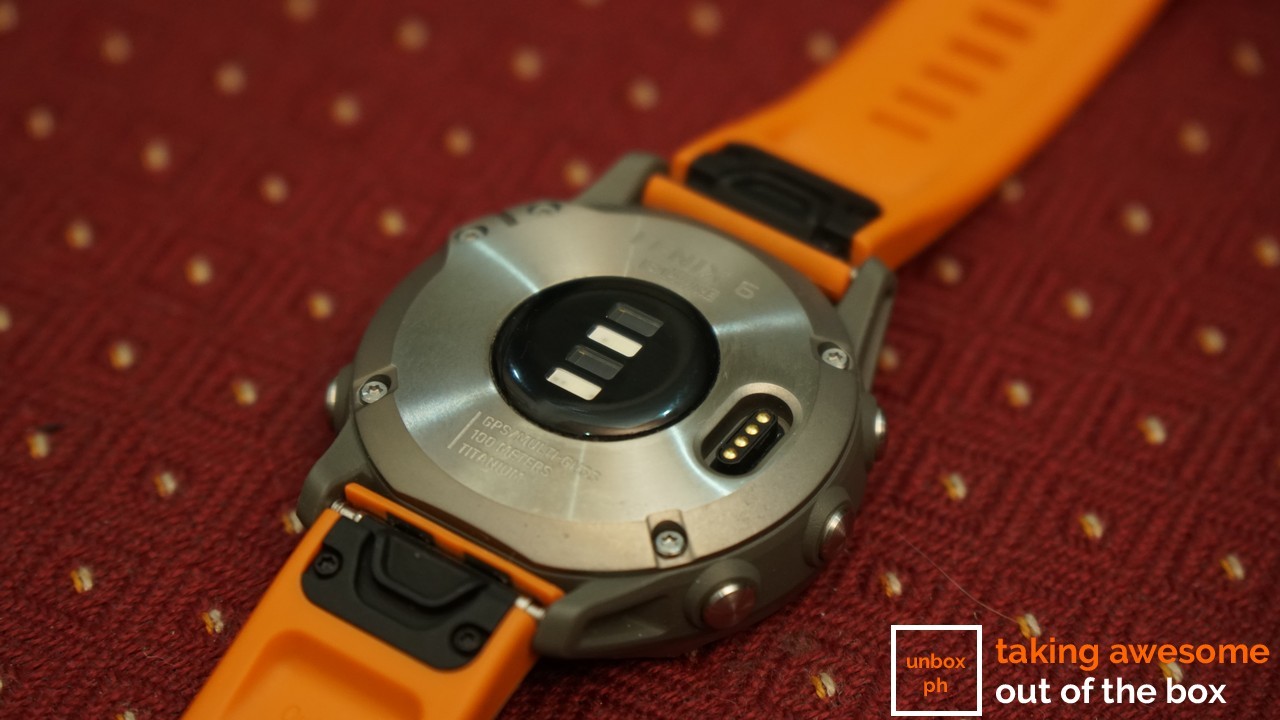 There’s plenty of buttons on this thing – three on the right and two on the left – because the screen isn’t a touchscreen. All navigation has to be done via the buttons scattered on the side. The middle and bottom buttons on the left control navigation, while the button on the upper right is the OK button that you use to select items on the menu. The back button is right below that, while the top button on the left lights up the display. Long pressing that button shows you the settings.

Controlling the Fenix is a little confusing, especially for people who are moving from typical smartwatches like Huawei’s Watch GT. Despite the lo-tech navigation method though, the Fenix 6 has a LOT of information that you can access via widgets, including temperature, barometric pressure, sunrise and sunset, compass and more. 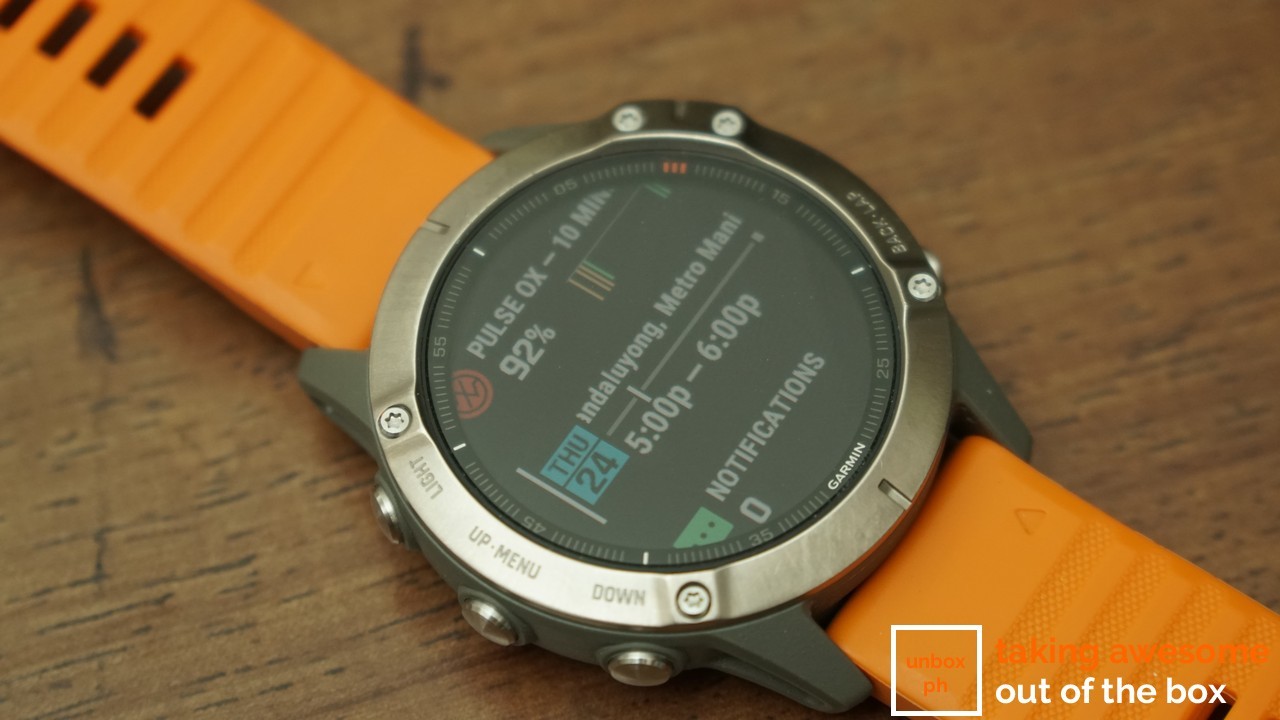 The display isn’t as bright as a typical smartwatch because Garmin uses a transflective memory-in-pixel (MIP) based display over OLEDs. It can still be seen in direct sunlight and indoors, with the added bonus of the display not blinding you when you look at your watch in a dark room. The display tech also consumes much less power, which allows the watch to run for days on end without having to be charged. 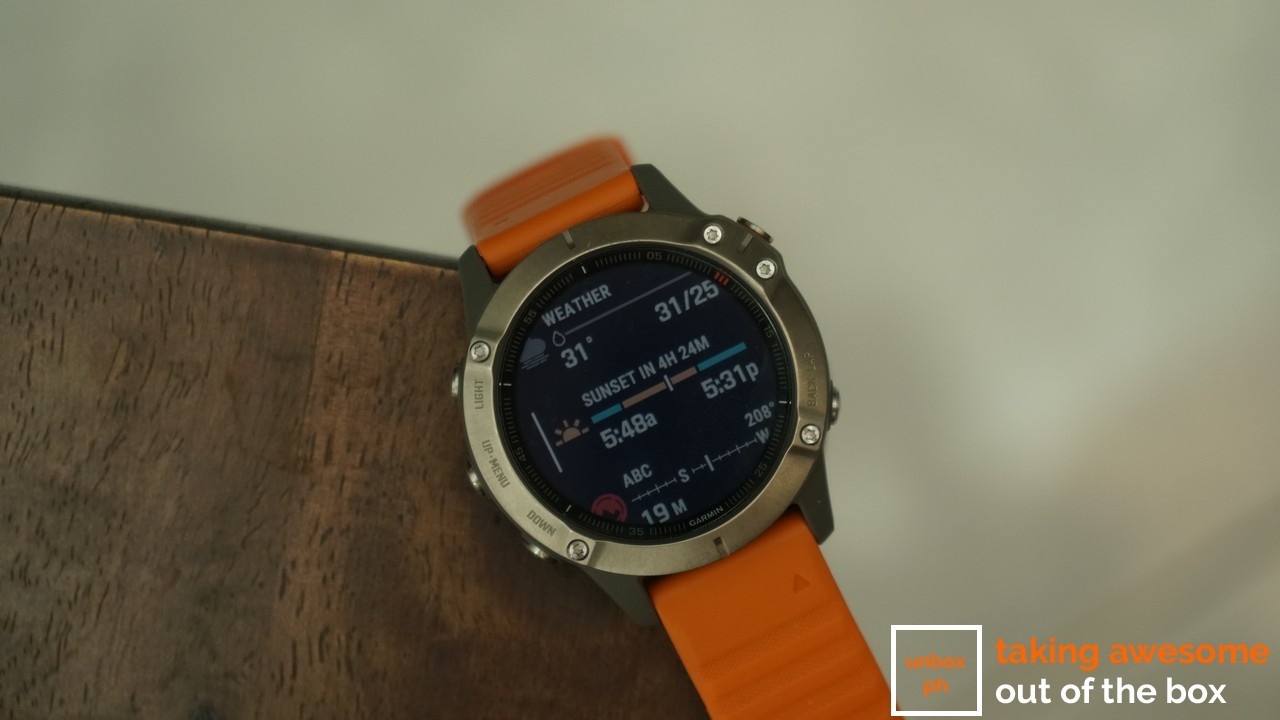 More data than you know what to do with

What really sets Garmin apart from its competitors is the sheer amount of data it provides to users.

Aside from the typical heart rate monitoring data that you can expect from this wearable, you can also get GPS, altitude, barometer, accelerometer, compass, gyroscope and a thermometer with the Fenix 6. 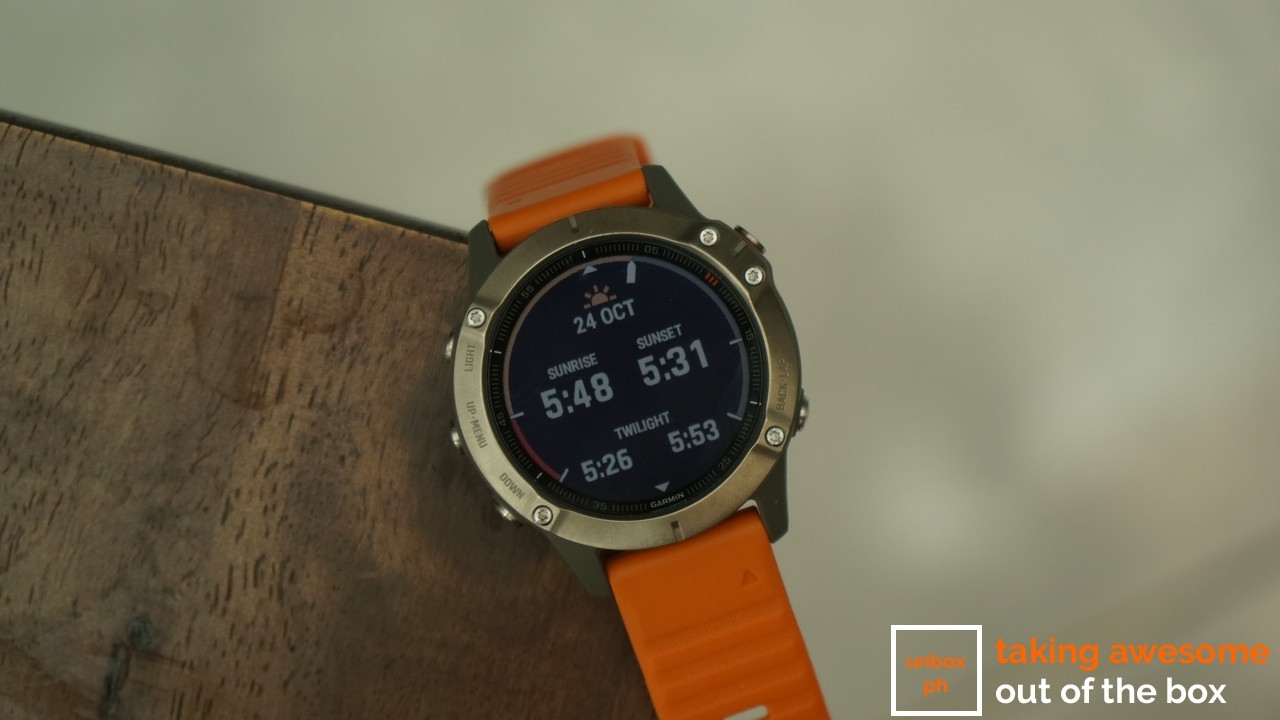 Getting all of that data together won’t mean squat if it’s not presented to you in a meaningful way, and the Fenix 6 does that easily in easy to digest widgets.

One nice feature we like is Body Battery – the Fenix 6 takes all of the relevant information from the measurements it takes, from heart rate all the way down to how much sleep you got, and boils it down to an easy to digest representation of how much energy you have left.

You’ll have to wear the watch 24/7 to get an accurate reading, but holy crap is it accurate, at least for us.

There’s also PulseOx, which was made to measure your blood oxygen level saturation levels. This is used more for checking your sleep patterns and in high altitude environments.

You’ll probably be using it more for the former than the latter, but it just shows just how much data the Fenix 6 generates for people really serious about tracking their fitness. 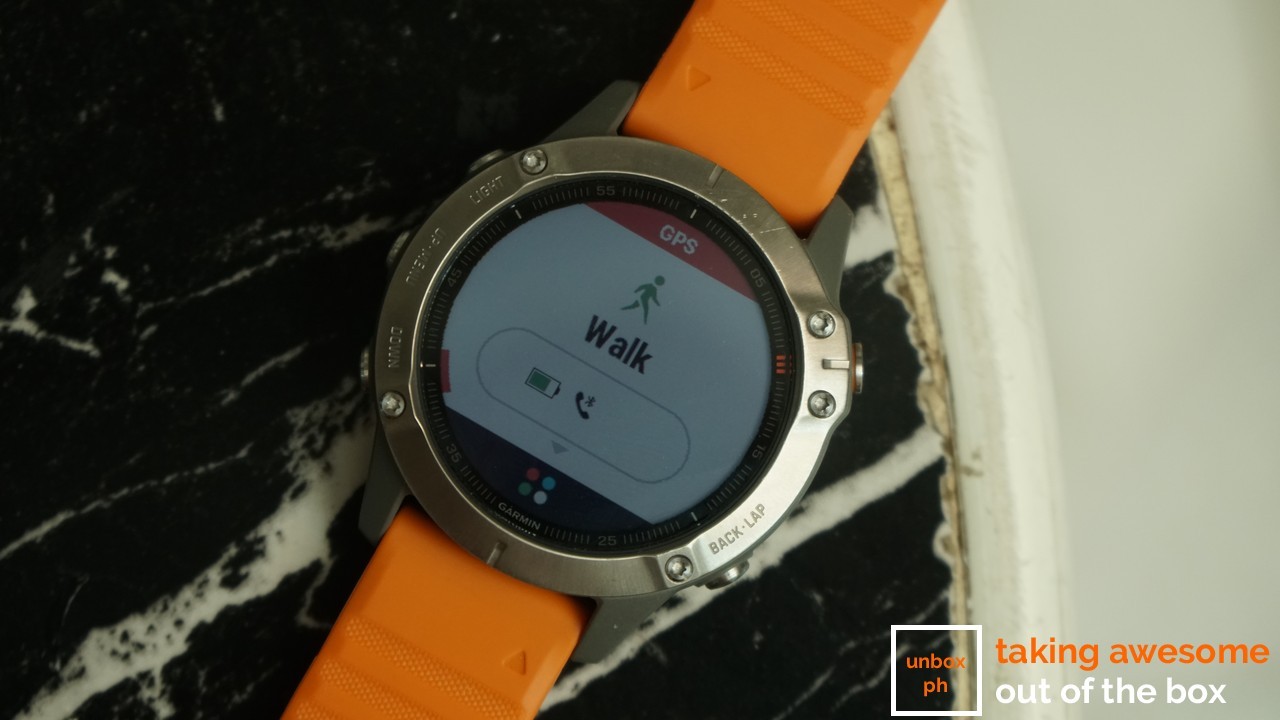 Speaking of fitness, there’s plenty of activities that the Fenix 6 can track, including common ones like walking, running, biking and hiking. 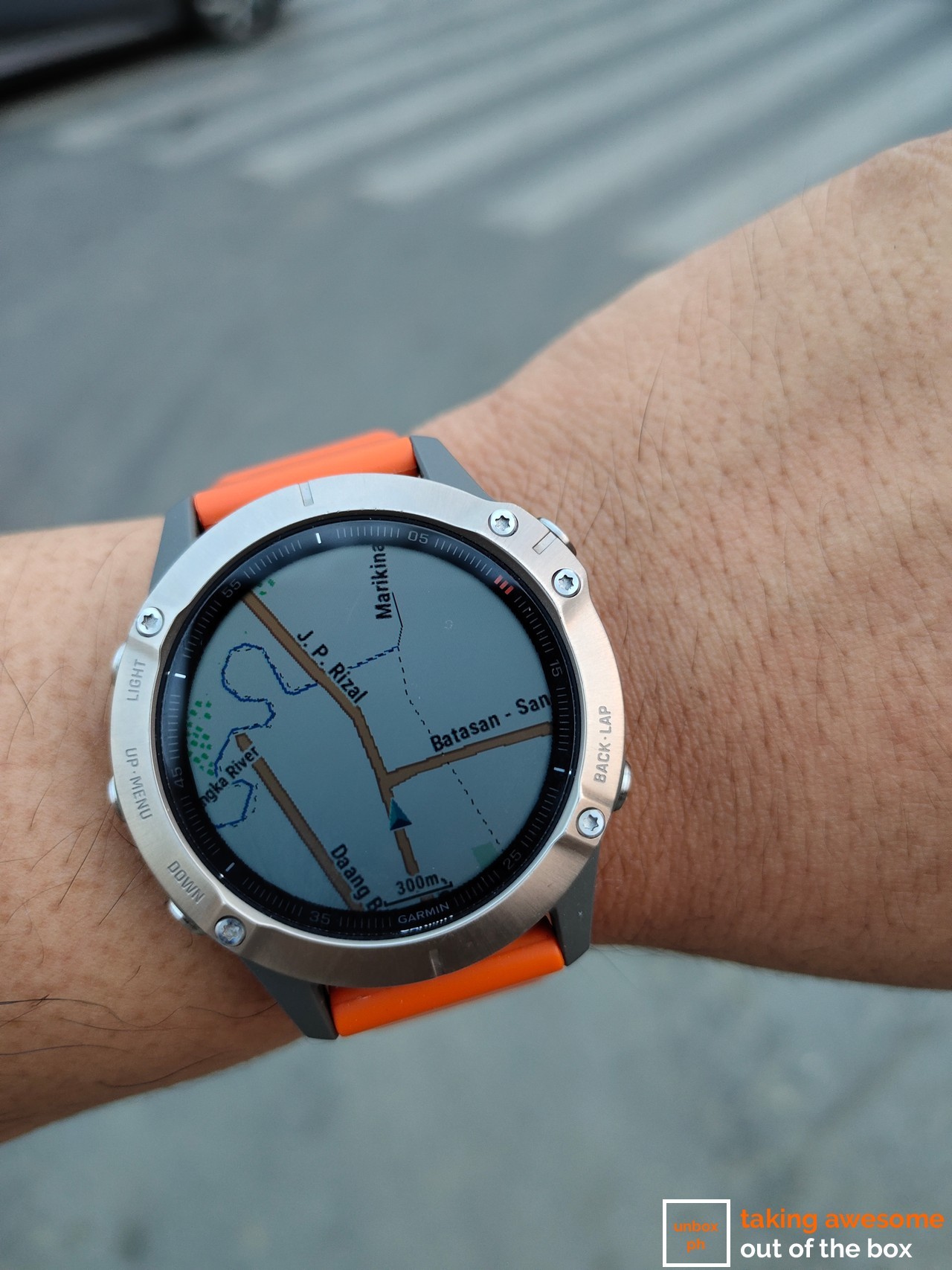 The Fenix 6 has built-in GPS and can tap into different satellites for navigation, with an overlay appearing in the watch face to help with guidance. While the watch locked onto my position pretty quickly, Garmin’s map in the Fenix 6 isn’t completely accurate, as it did not show multiple roads around my area in San Mateo, Rizal as of press time.

Battery life that can be measured in months, not days

With the low-power display and large battery inside the Fenix 6’s chunky body, Garmin claims that you can get up to 48 days of use with the watch in one charge.

There’s plenty of caveats there of course – the watch has to be in battery saving mode, with most of the features turned off.

In regular smartwatch mode, battery life drops down to a more realistic 14 days or around two weeks. It all depends on how often you use the Fenix 6’s more advanced features like GPS and the like. I found the watch to last around a week with my use, which is expected with the number of features I utilize when I’m wearing it.

Charging the Fenix 6 is simple enough, and is done via a proprietary charging cable, connected to any USB port. 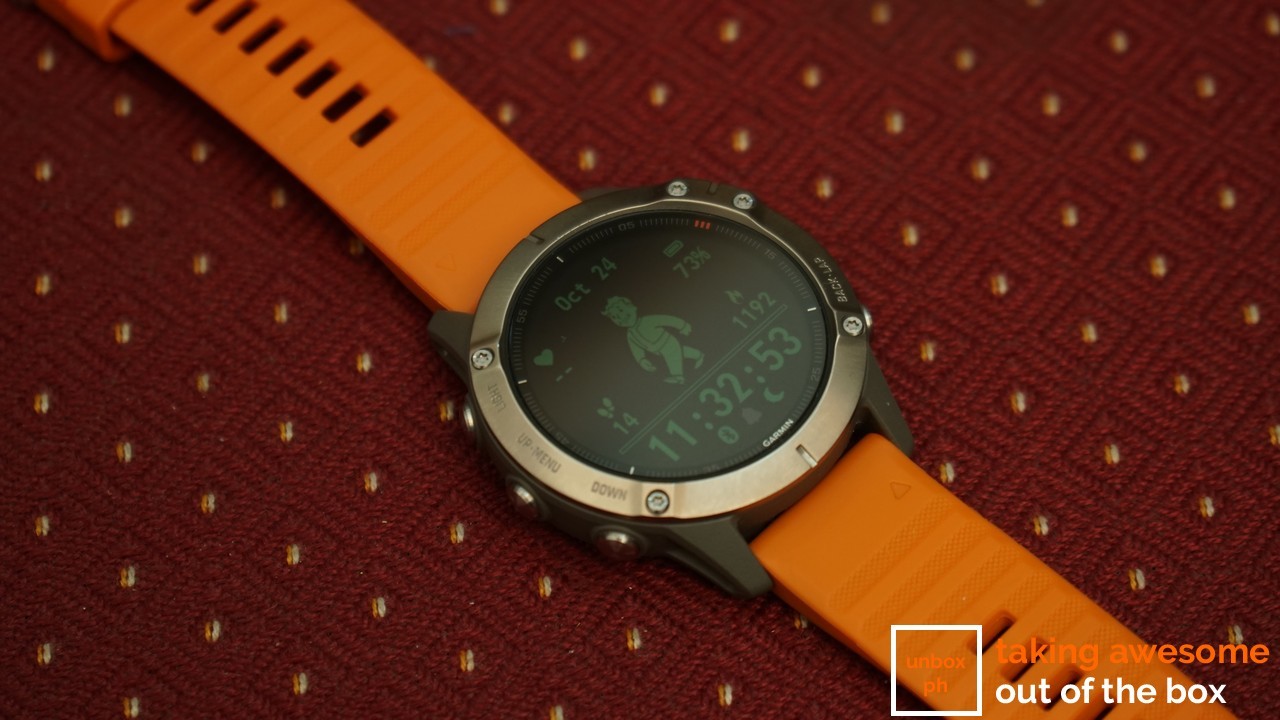 Verdict: It’s tough and versatile, but not for everyone

Garmin’s Fenix 6 Sapphire is one of the most feature-rich smartwatches I’ve ever tested, though its chunky exterior and sporty styling is definitely an acquired taste.

It’s also one of the most expensive wearables in the market today, with the model I tested retails for Php 40,995. It’s incredibly expensive which puts it out of the reach of most people today.

But then again the Fenix 6 is targeted at a very small niche of people that are serious enough about their fitness and the sport that they engage in that they’re willing to shell out that much money to get as much data as possible from their activities. In that regard, the Garmin Fenix 6 Sapphire definitely fits the bill.