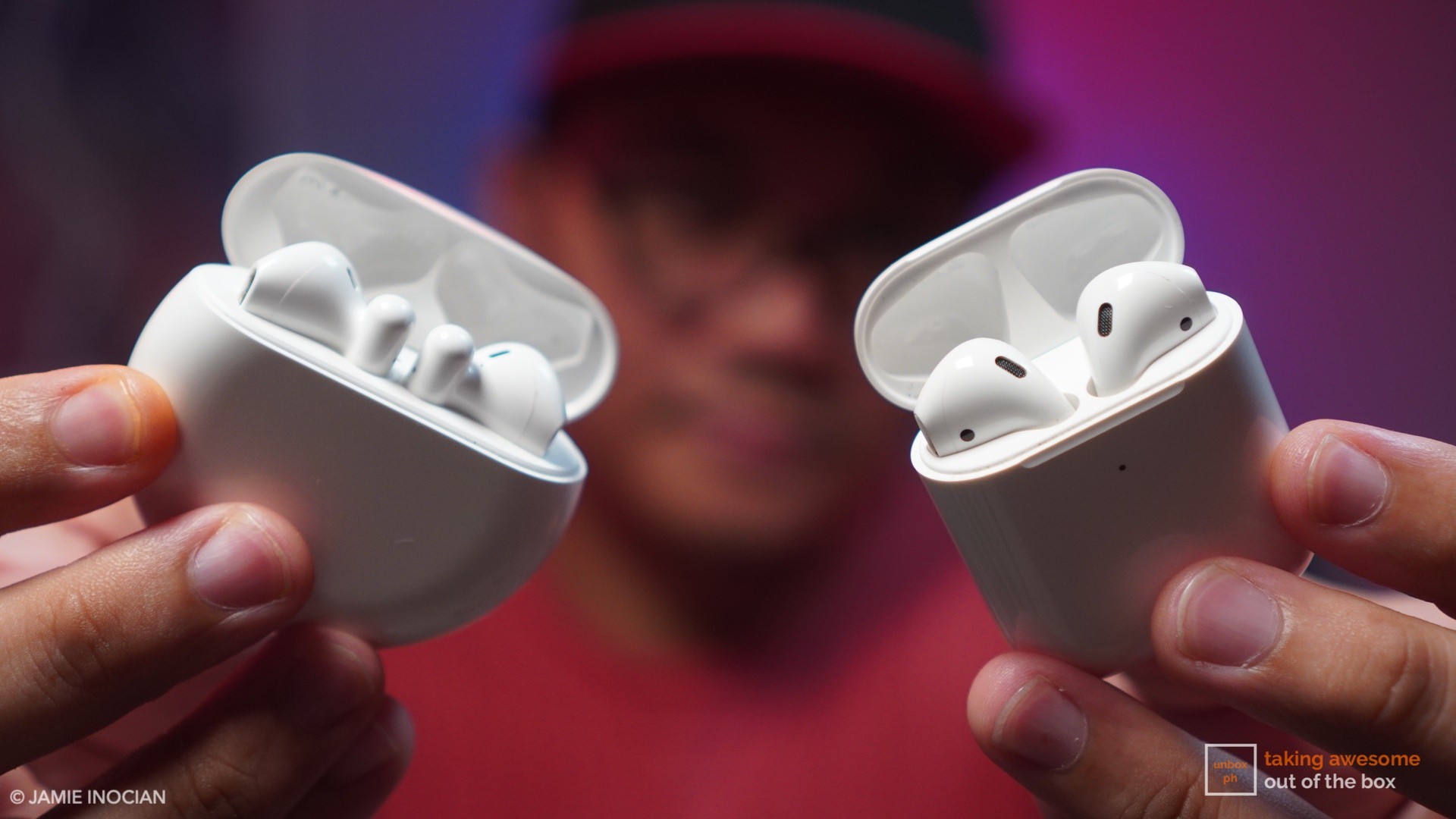 We compare the two to see which is better

A lot of you are probably looking to make a switch to a True Wireless Stereo (TWS) earphone this Christmas. For many, the default choice is Apple’s AirPods 2, but there’s more to audio than just buying what’s popular nowadays.

There’s a lot of other better sounding and more affordable choices for TWS earphones out there – case in point, Huawei’s FreeBuds 3. These open-fit, ANC capable headphones have a lot to offer at a lower price point compared to Apple’s offerings. 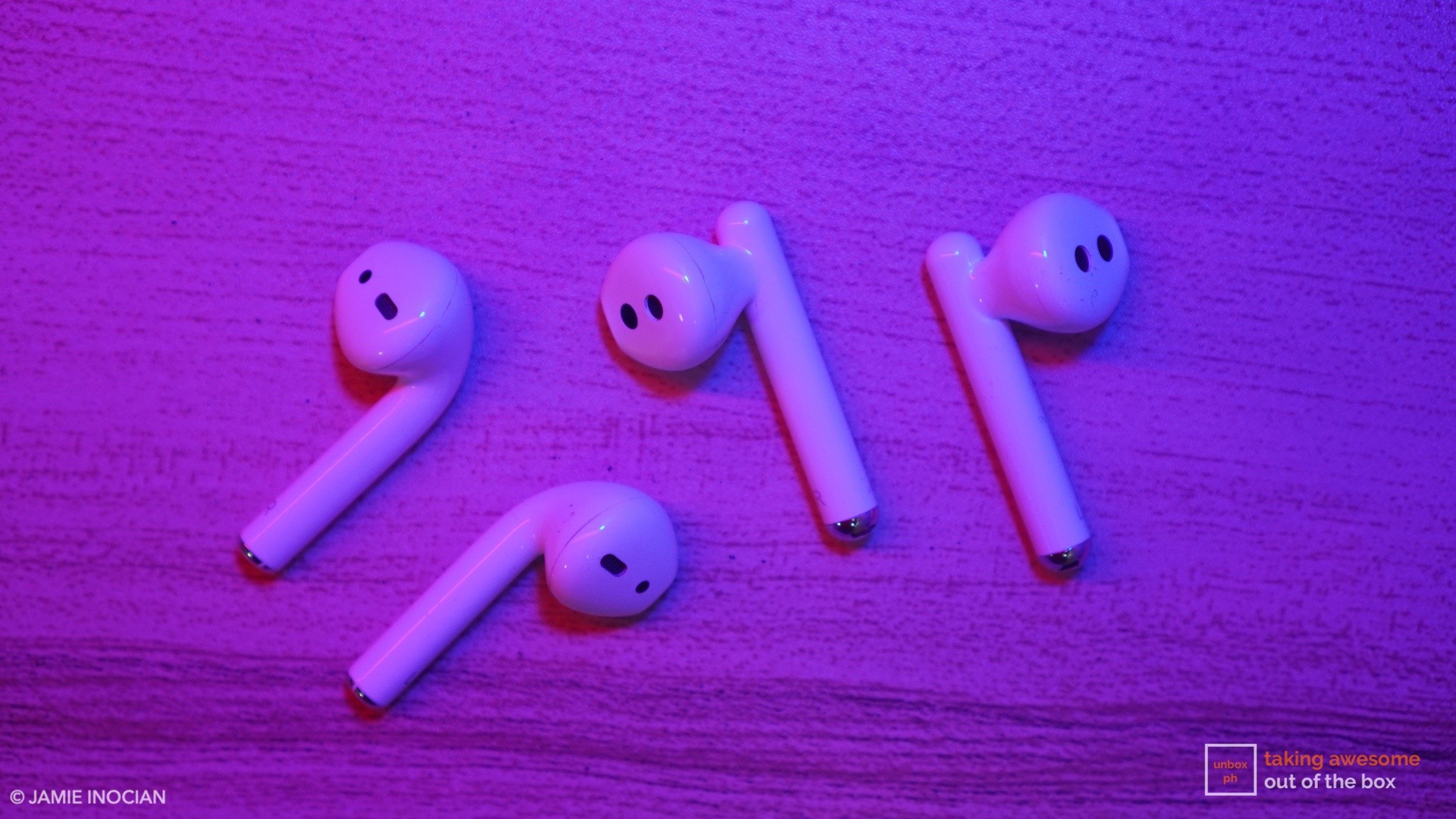 If there’s one thing people will absolutely notice with the FreeBuds 3 VS Apple’s AirPods 2, is that both devices look very similar.

There are certain differences though: while Apple’s AirPods 2 only comes in white, Huawei’s offerings come in two colors: Carbon Black and Ceramic White.

Both earphones use an open fit design, meaning they sort of hang in your ear instead of actually being a snug fit. There’s plenty of benefits to this, including better situational awareness when wearing them outdoors (especially useful when commuting) but the drawback here is that audio quality sometimes suffers because of the open fit nature.

The FreeBuds 3 tries to mitigate that with a “dolphin design” – an elongated tip at the end of the earbuds that go deeper into your ear canal. 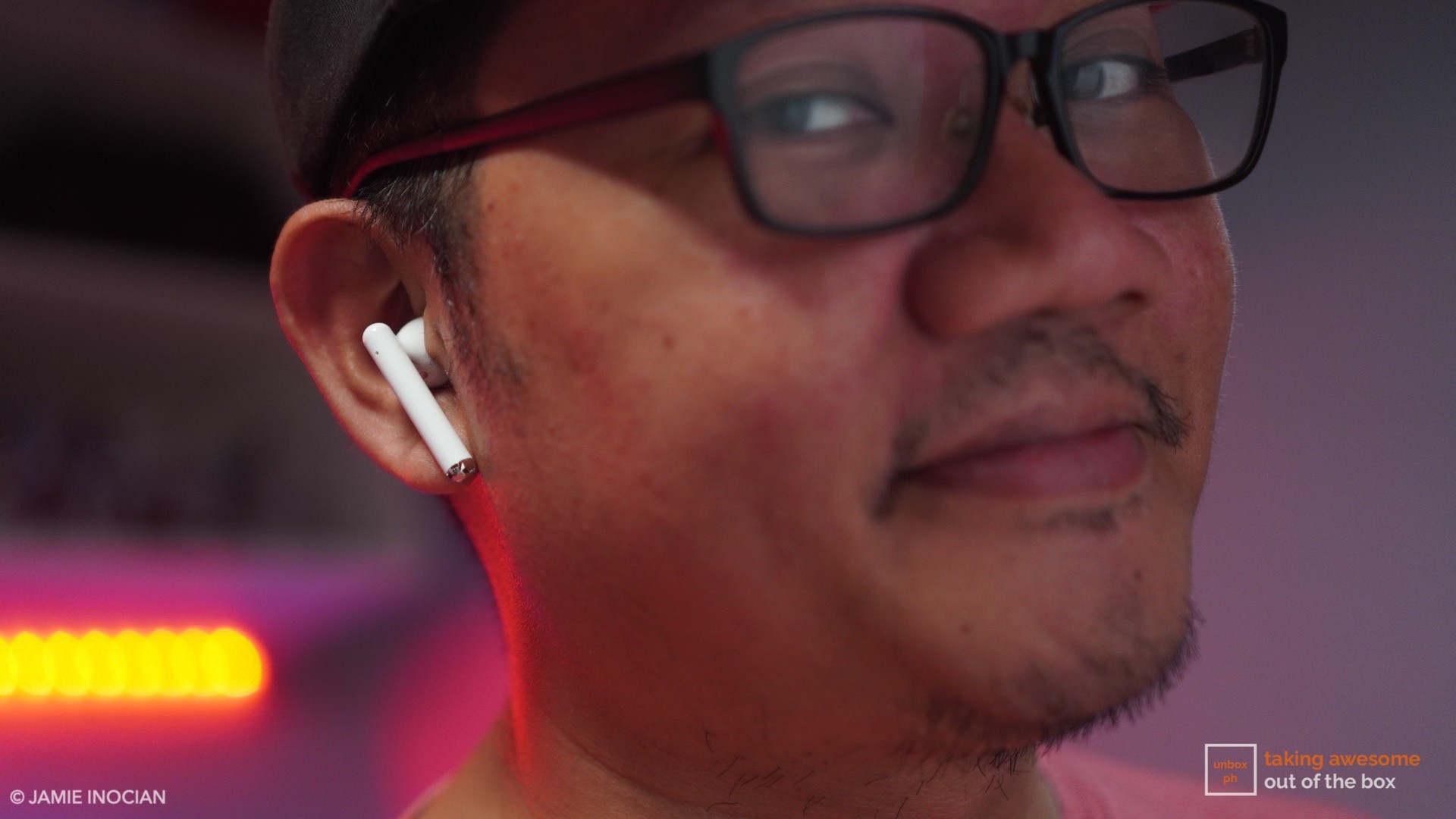 While both the FreeBuds 3 and the AirPods 2 use True Wireless Stereo Bluetooth technology (which allows the left and right earbud to connect individually to your phone), there’s a lot of difference in both performance and features for both products.

Huawei’s FreeBuds 3 has AI smarts thanks to the Kirin A1 chip inside which is able to intelligently identify frequency bands affected by WiFi signals and other wireless signals and hop to an unaffected channel quickly so you don’t get interference when you’re listening to your music.

The FreeBuds 3 also has a lower overall latency of 190ms VS the 220ms on Apple’s AirPods 2, making the FreeBuds 3 a better choice if you’re into mobile gaming.

The FreeBuds 3 also uses a bone sensor to pick up your calls which aren’t as susceptible to wind noise as the regular voice sensor that’s used on Apple’s AirPods 2.

And unless you’re ponying up for the more expensive Pro model, Apple’s AirPods 2 doesn’t have active noise cancellation. The FreeBuds 3 does. 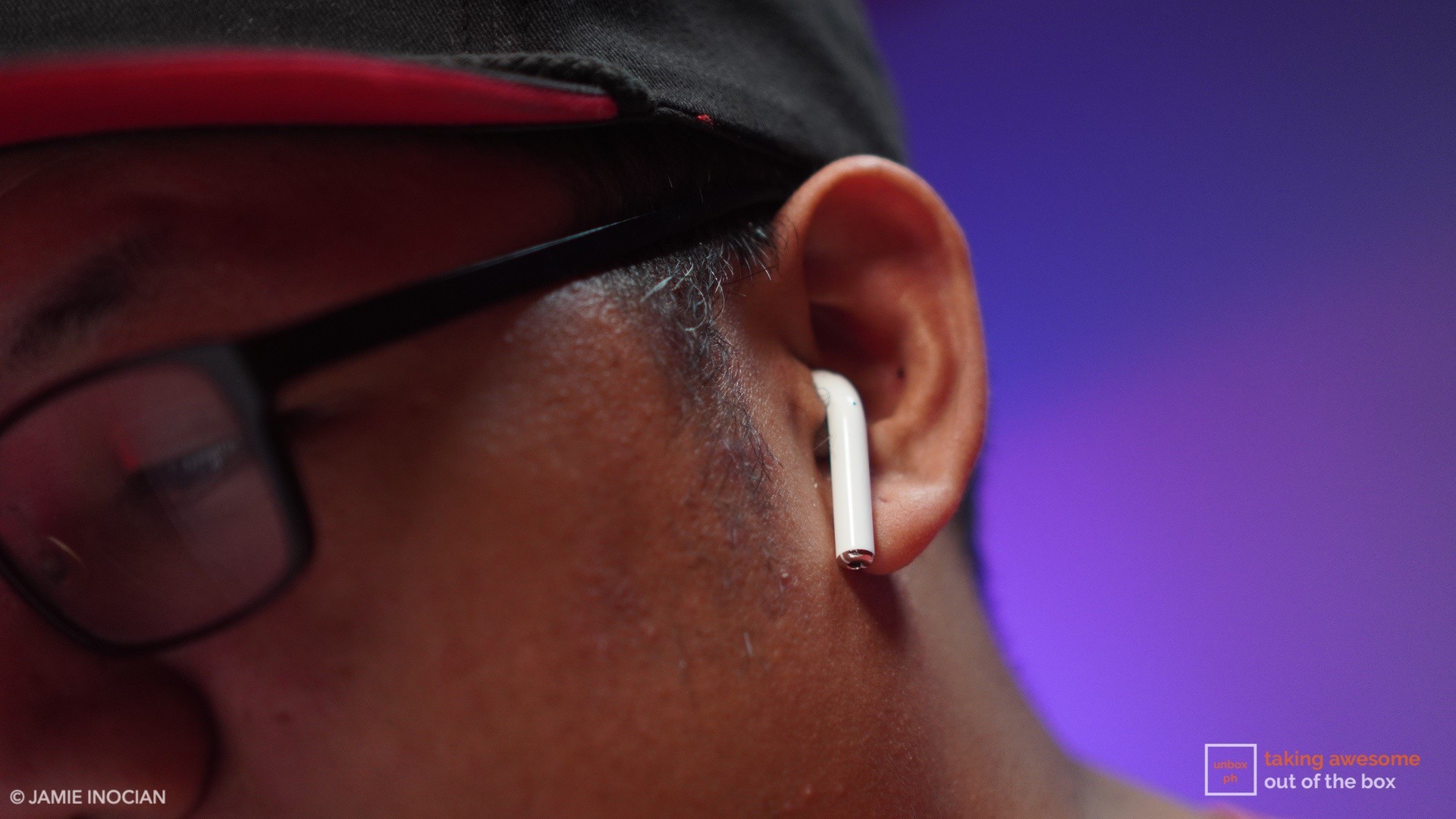 The audio quality for both open fit headphones is similar, though the FreeBuds 3 definitely takes the lead once you turn on ANC.

ANC really is a game-changer here as it allows you to enjoy your music without getting too distracted by outside noise. That’s not possible with the AirPods 2, which puts the FreeBuds 3 way ahead. 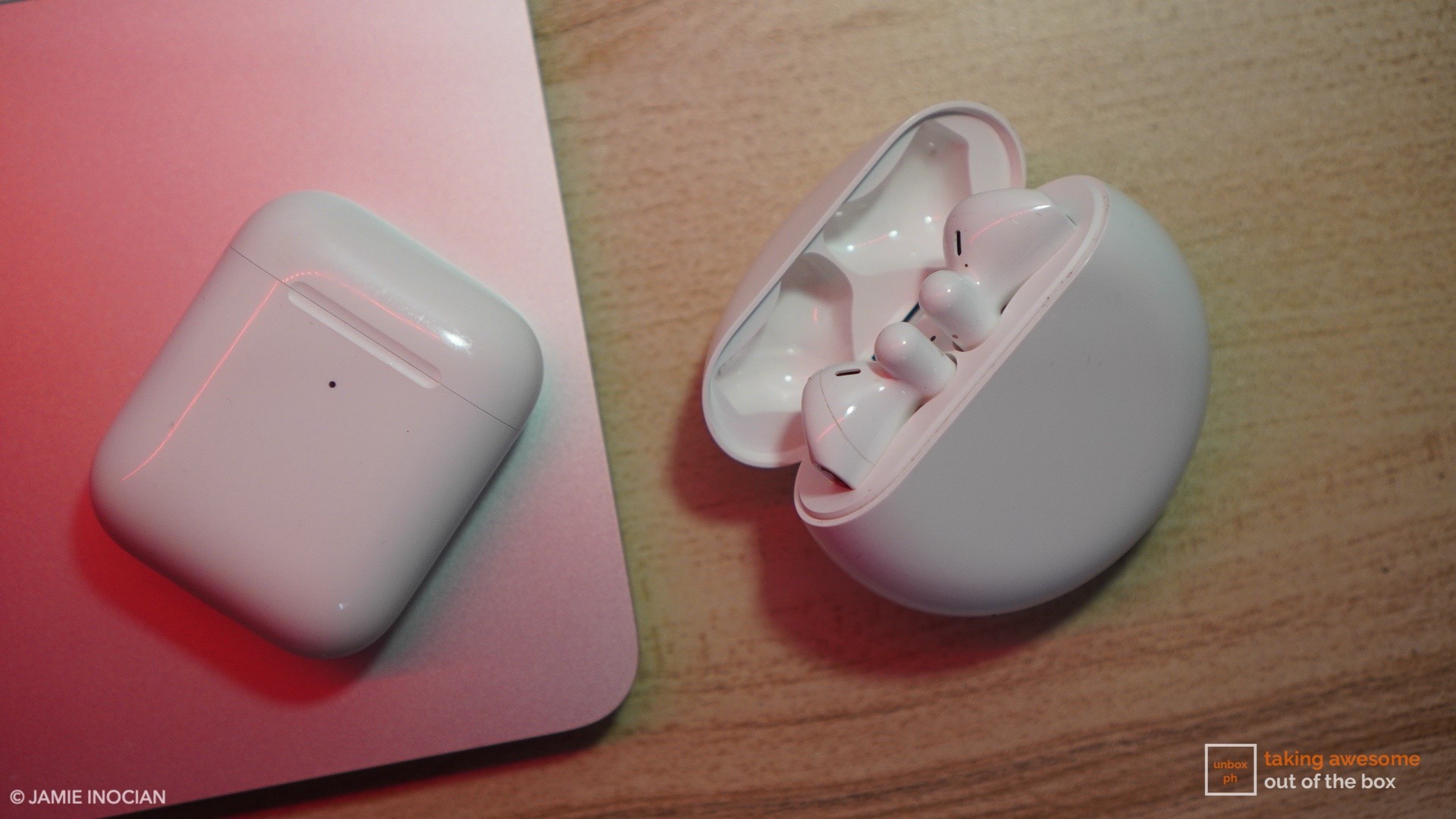 The FreeBuds 3 does charge faster than the competition though, refilling 45% of its tank in just 15 minutes. Apple’s AirPods 2 charging case only does 15% in 15 minutes.

Price is one of the biggest factors that will inform you of your decision between these two TWS headphones: Apple’s AirPods 2 is priced at Php 11,790, while Huawei’s offering is only Php 8,990, significantly less with more features and with ANC.

If you go with Apple’s AirPods Pro, the price difference becomes starker, as this model is priced at Php 14,990.