We review the Starmobile Knight X!

Starmobile’s Knight line of smartphones have a knack of being the most advanced smartphones offered by any local brand. The original Knight was our pick for top local smartphone back in 2013. It’s successor, the Knight X was the most innovative, powerful and feature packed when it was announced back in 2014, and today we’ll be seeing if it truly lives up to the reputation of the Knight product line.

Simplicity at its best

Most flagships try to win you over by looks and garish desings. The Knight X does the opposite – it’s a rather simple, yet elegant smartphone that nevertheless has a timeless look to its overall design. The back of the phone features a dark grey, non-removable back cover with a nice textured feel that helps you keep your paws on the phone while you’re using it, and has a concave shape near both sides to facilitate this. The Knight X is easy to keep a hold of, even though it sports a rather large 5.5-inch display.

Since you’re not getting a removable battery, the SIM tray is located on the left side, and requires a pin to pop out. The volume rocker is located on the same side, while the power button is on the right. Up top you’ll find the 3.5mm jack and an IR blaster, while the bottom of the phone is where the USB port resides.

The front of the smartphone is obviously dominated by the 5.5-inch full HD IPS display that’s protected by scratch resistant glass and comes with a screen protector already laid in on top. And while the bezels aren’t going to match the anorexic proportions of other flagships like the Huawei Mate7 they’re still rather thin. The display quality of the full HD panel is quite good as well, with good color reproduction and viewing angles. There’s also an app included that allows you to tweak the display saturation, contrast, sharpness and temperature.

Like you saw in our initial unboxing article, the Knight X also has a couple of freebies thrown in including a screen protector and a nifty flip case, though we did notice a delay in the animation of the flip cover while we were using it.

More than just an octacore phone

The Knight X is a recipient of MediaTek’s MT6595M processor running at 2.0GHz. It’s essentially in the same family as the one in the MX4 uses, though with a few features omitted. The Knight X is also the first (but not only) locally branded smartphone with 3GB of RAM. The plentiful RAM aloows you to keep more apps running in the background, allowing for more multi-tasking. As expected the Knight X’s synthetic benchmark scores are through the roof, and you’re definitely not going to have any kind of issues with apps and games when you’re using the Knight X.

As to prove a point, we fired up Real Racing 3 on the Knight X to see what it’s capable of. Real Racing 3 is a rather harsh game to play on a smartphone, as it gives even Qualcomm Snapdragon chips some trouble if the GPU isn’t good enough. Thankfully, the Knight X managed to run Real Racing 3 without too much trouble, and while some skipped frames are to be expected, it’s not going to affect gaming too much.

As far LTE is concerned, the Knight X delivers. We managed to get around 11mbps average on both SIM slots using the same SIM, so it really doesn’t matter which slot you use. Speaking of the two LTE slots, switching from one network to another is a breeze, which is a god-send if you use LTE SIMs of both telcos for maximum data coverage.

Like other phones, the Knight X has gesture features built-in. Drawing letters on the display will open the associated app for it, and double tapping on the display will unlock the phone quickly. The NFC capability works as advertised, though the IR blaster is currently disabled despite our attempts to install 3rd party apps that use it from the Google Play store. Starmobile is aware of this and will send out a software patch to fix the issue.

Satisfying camera both front and back

The Knight X uses Sony’s 13-megapixel Exmore RS IMX135 sensor, so you know it’s capable of taking quality photos. This is mostly true – photos were clear and crisp with plenty of detail and good color reproduction. We did notice that photos taken in extraordinarily bright environments had over saturated colors and a slight yellowish hue in the photos.

The Knight X has a 5-megapixel front facing camera that takes decent selfies even if it’s not an autofocus unit, though we really miss the 13-megapixel sensor in the original Knight.

The single biggest issue with the Knight X is battery life. The Knight X is equipped with a 3,350mAh battery that, in theory, should last more than a day on normal use. That’s not the case – our review showed that we managed to eat all of that up in around 12 hours with moderate use with both mobile data and WiFi on. While this is theoretically enough for a whole working day, we were expecting better. There are ways to extend your battery of course, and it’s unrealistic to expect to not drain your battery when you’re using LTE most of the time.

The Knight X proves that it lives to the legacy of the original Knight. With a powerful processor, LTE and 3GB RAM, the Starmobile Knight X is one of the most powerful locally available Android devices out in the market today. Of course, people will always point out that its price is too high, but it all comes down to what you’re willing to pay for to get an awesome phone. 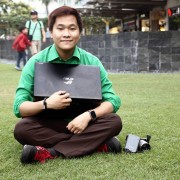 ASUS’ ROG x Gundam Collab Is A Match Made In Heaven

The Snapdragon 870 is the New King of Clock Speeds

ASUS’ ROG x Gundam Collab Is A Match Made In Heaven

The Snapdragon 870 is the New King of Clock Speeds

Starmobile Knight X Unboxing: The Most Advanced Local Flagship in the PH

Top 5 Things We Like About the Starmobile Knight X