Behind closed doors at Mobile World Congress 2018, vivo showed off one of their concept that hailed an all-screen phone thanks to innovation — the pop-up front camera. While the Apex concept did make it into production in the company’s NEX lineup of devices, they didn’t quite make it onto our shores so we didn’t get to experience the device firsthand but that changes with the phone they just launched today. Nowadays, the idea of a motorized front camera that tucks away when it isn’t in use is far from a novel idea but that doesn’t mean that we aren’t excited to try out the vivo V15 Pro. 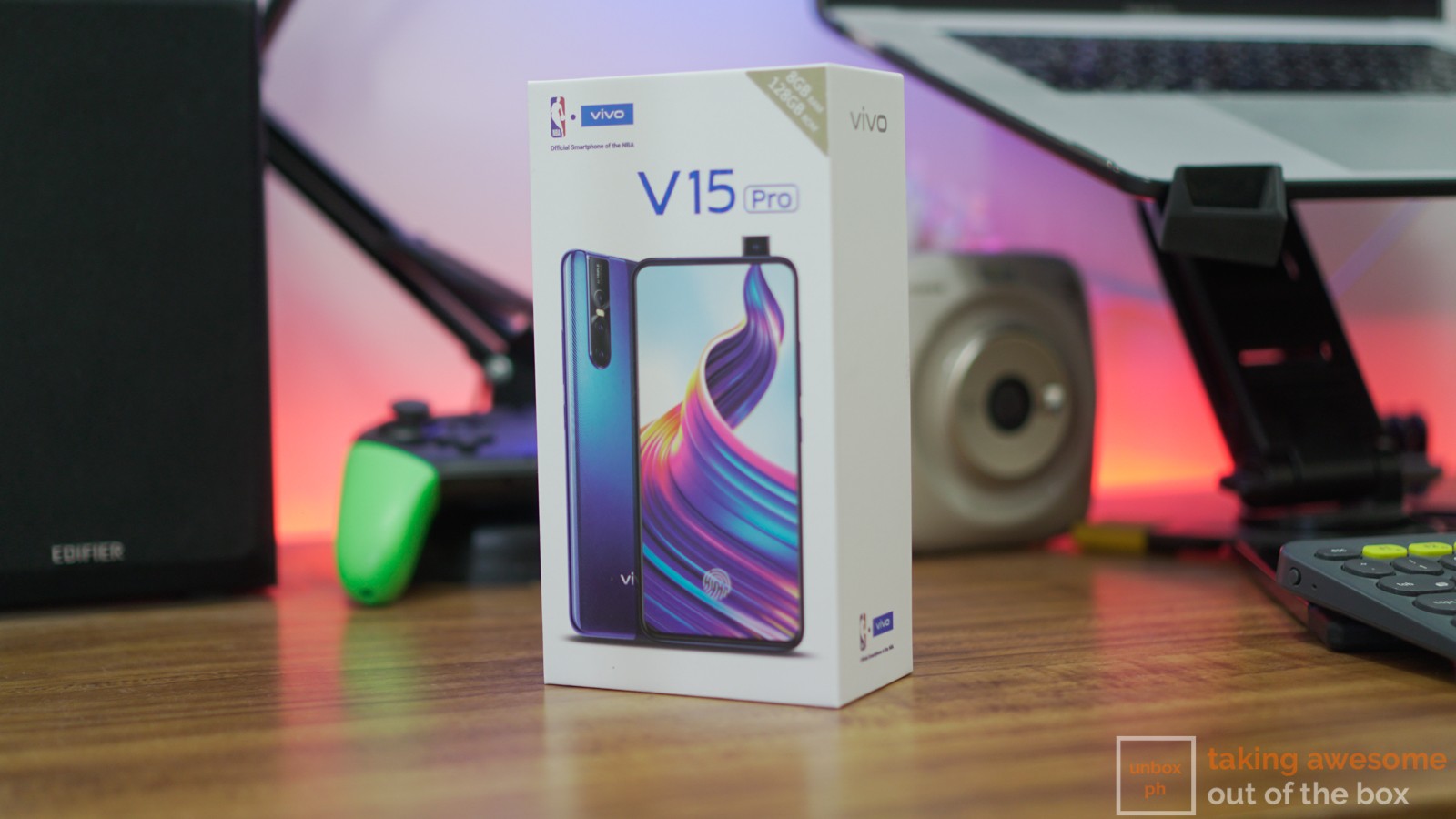 What Inside the Box?

The look of vivo’s packaging hasn’t changed at all with a photo of the phone in front with a little tab in the corner to show you the phone’s configuration. In our case, we’re getting more RAM than what was initially given at the launch in India at 8GB with 128GB of storage as well. The main features of the device are also highlighted at the back of the box. 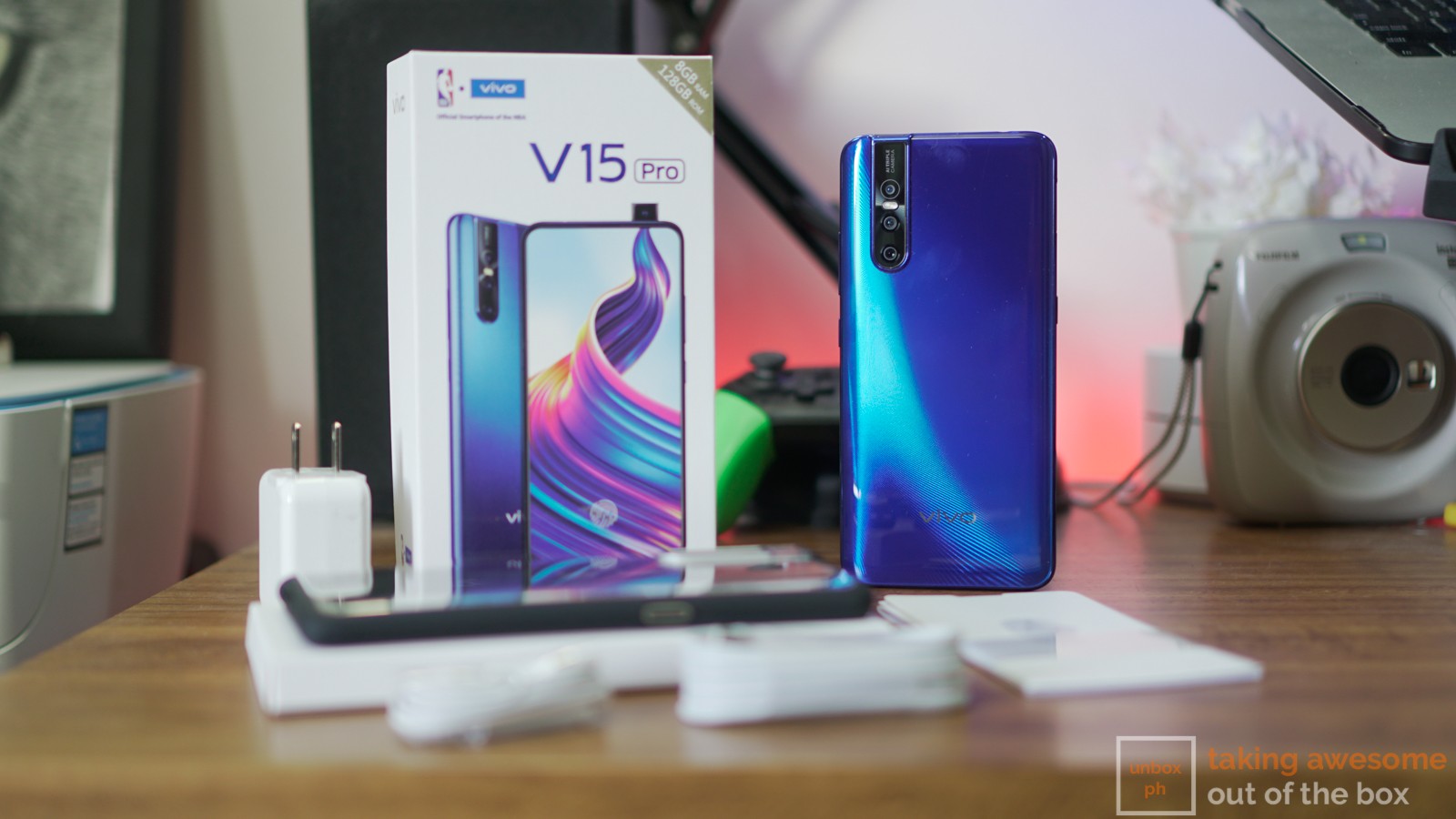 The review unit that we got comes in Topaz Blue though we were really hoping to get the more attractive (at least to us) Coral Red version of the device. You’ve got the usual contents in the box as well, which include a SIM ejector tool, the Quick Start Guide plus the rest of the documentation, the charger, cables, and a pair of earphones.

There’s also an included case that’s far from the usual jelly case that we typically out of the box. This one has rubberized sides to give a little more protection and the special cutout for the pop-up front camera. 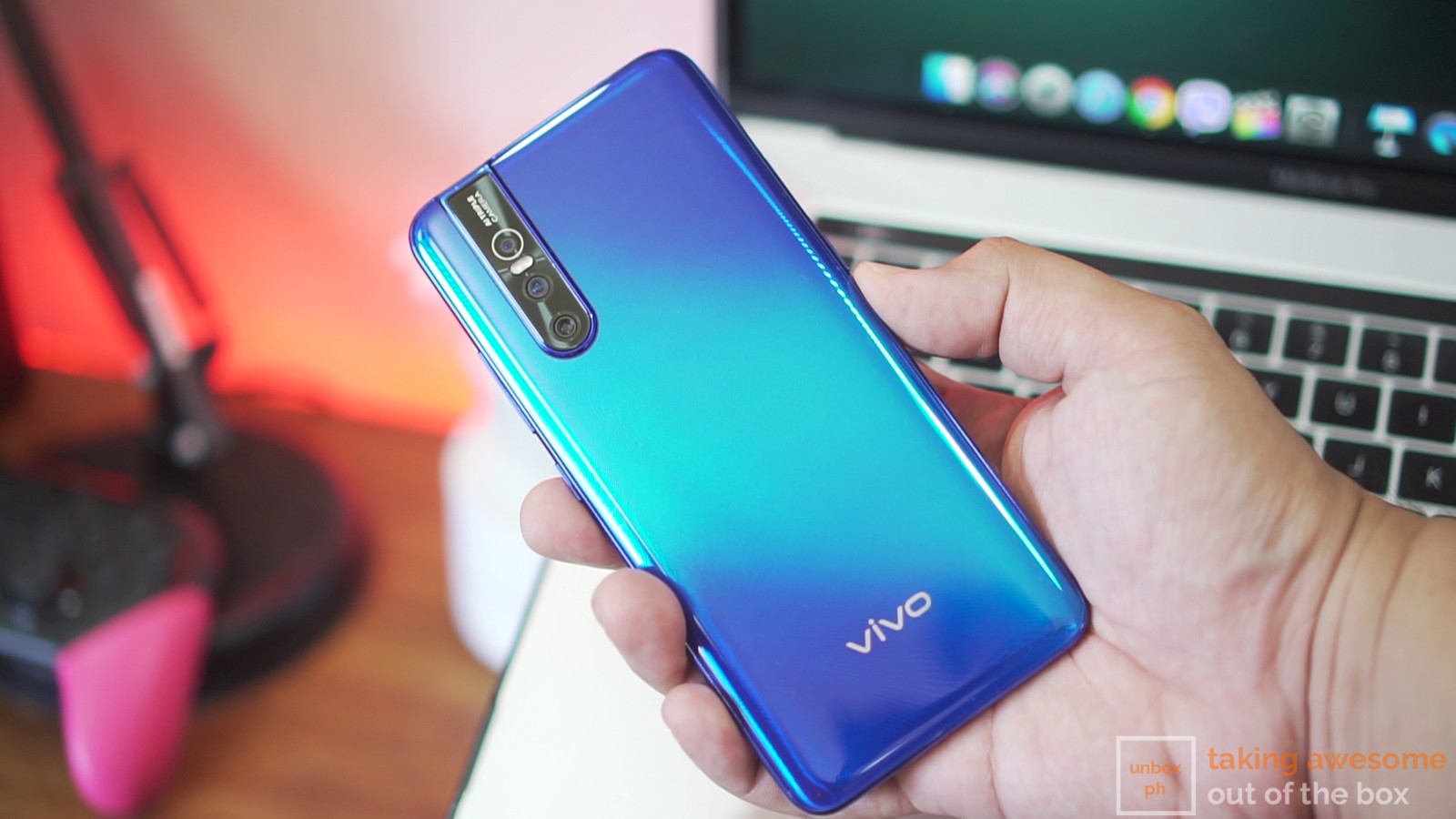 While some of the team are beginning to experience “gradient fatigue” that doesn’t mean we can’t appreciate it. The design element is present on the V15 Pro that comes in really bold color choices but the Topaz Blue offers a more monochromatic look with different shades rather than transitioning into deeper tones. There’s also a textured look to it that’s quite similar to the Emerald Green color variant of the Huawei Mate 20 Pro.

While the phone looks amazing, we’re a little disappointed that the build is made out of polycarbonate plastic. While some of you might be brave to use your device without any protection, we recommend that you err on the side of caution with this one because you’re really going to want to protect the motors on that front camera. 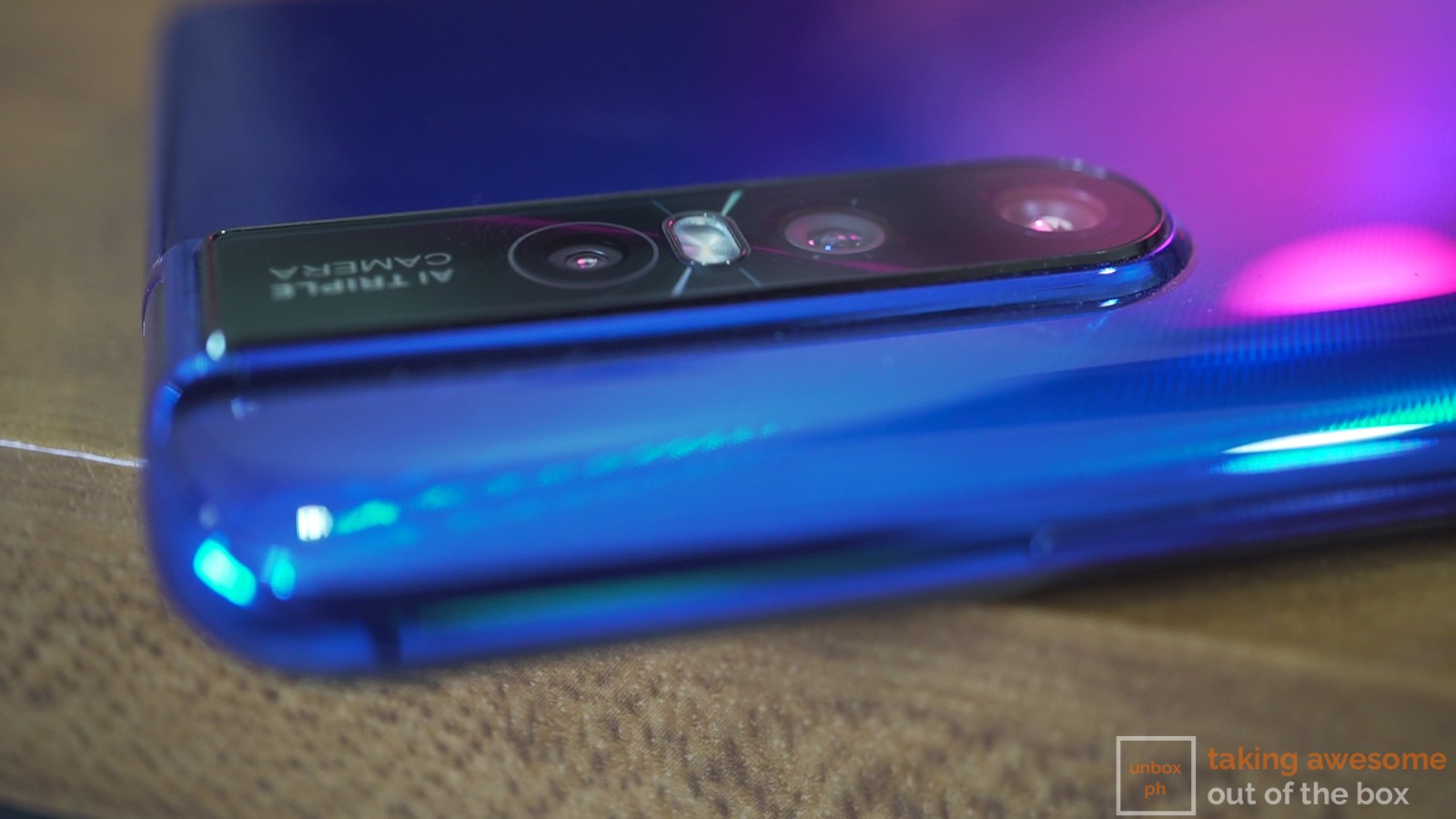 Aside from that, the general ergonomics are good though there is a significant camera bump on the triple camera setup of the V15 Pro so that’s another good reason to rock it with the included case. It doesn’t really protrude that much from the back of the phone but its larger than average because of the array’s configuration that also houses the innards for the front camera. 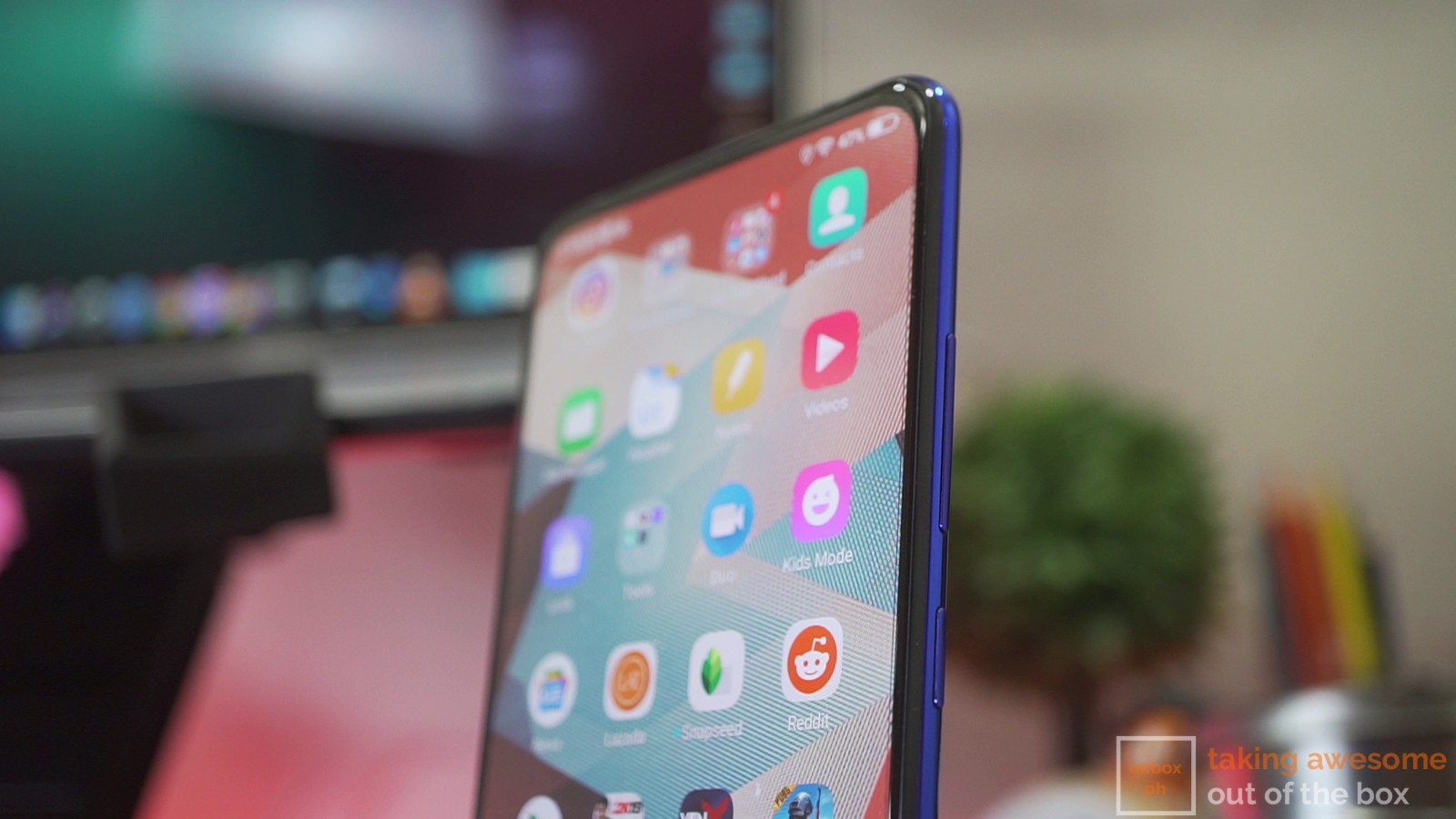 For the button and port layout, you have the power button and the volume rocker on the right side of the phone. 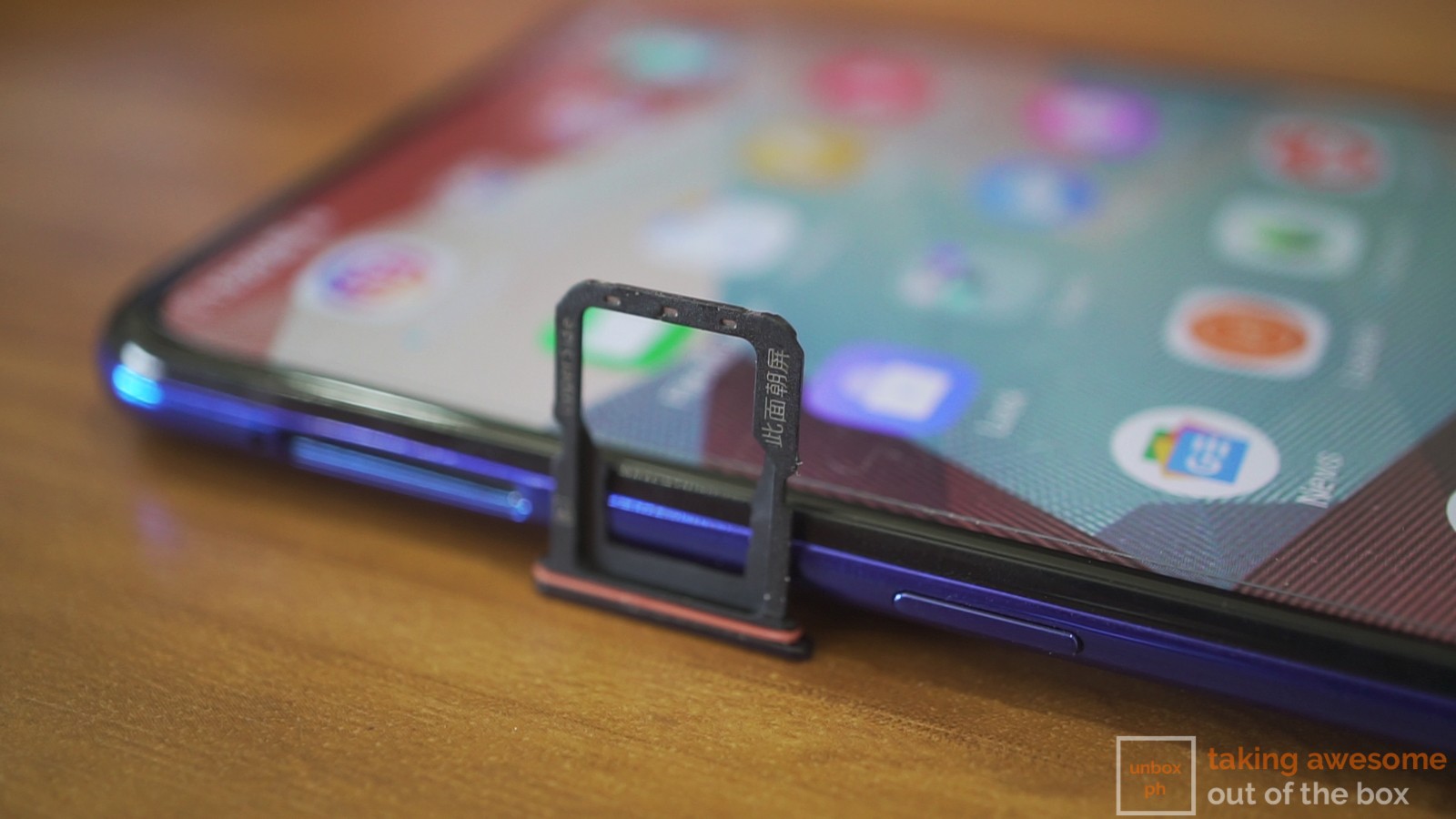 There’s a dedicated Google Assistant button on the left side of the device, as well as the access to the phone’s microSD card slot. 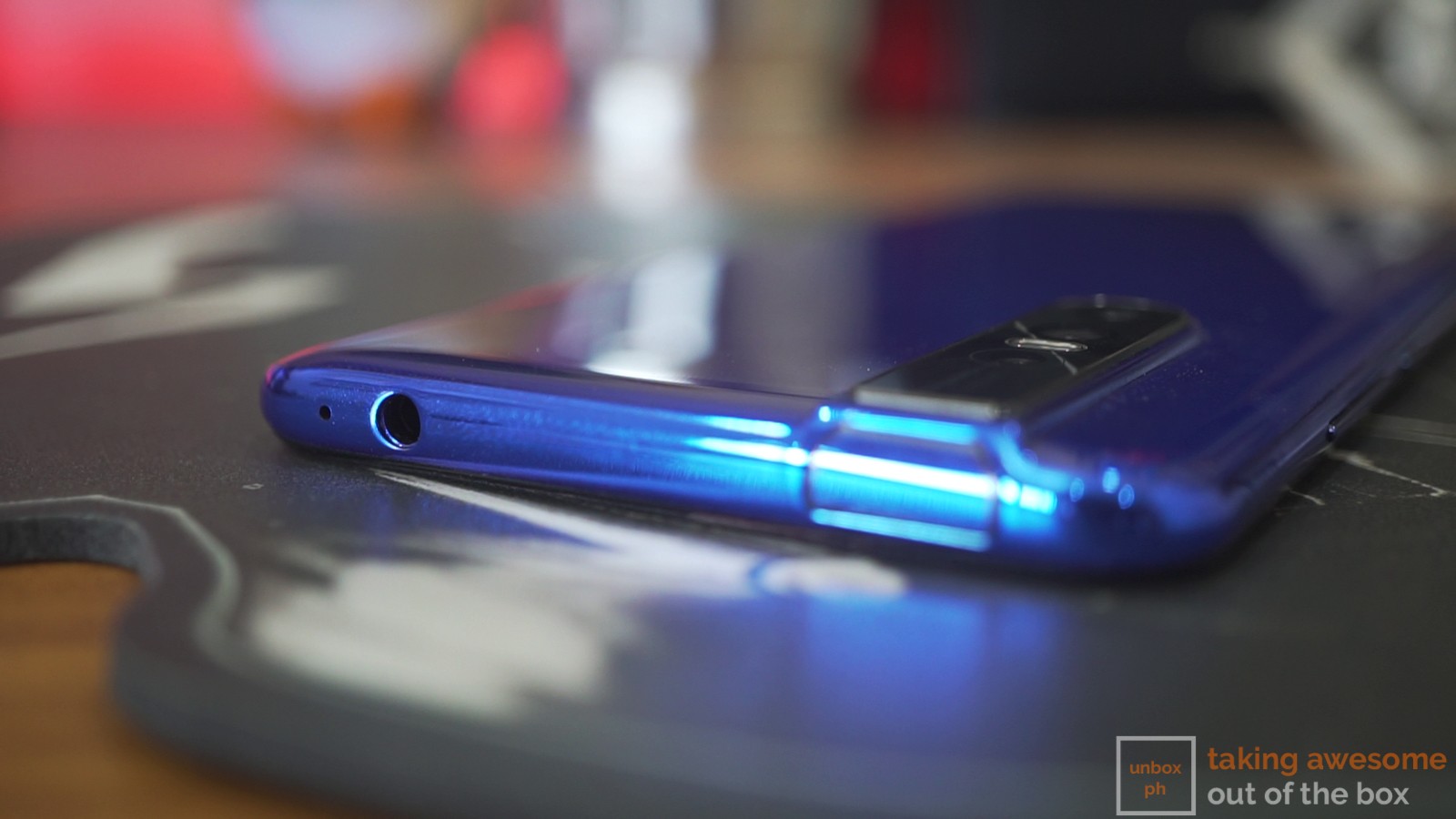 On top are the headphone jack and the spot where the pop-up camera, of course. 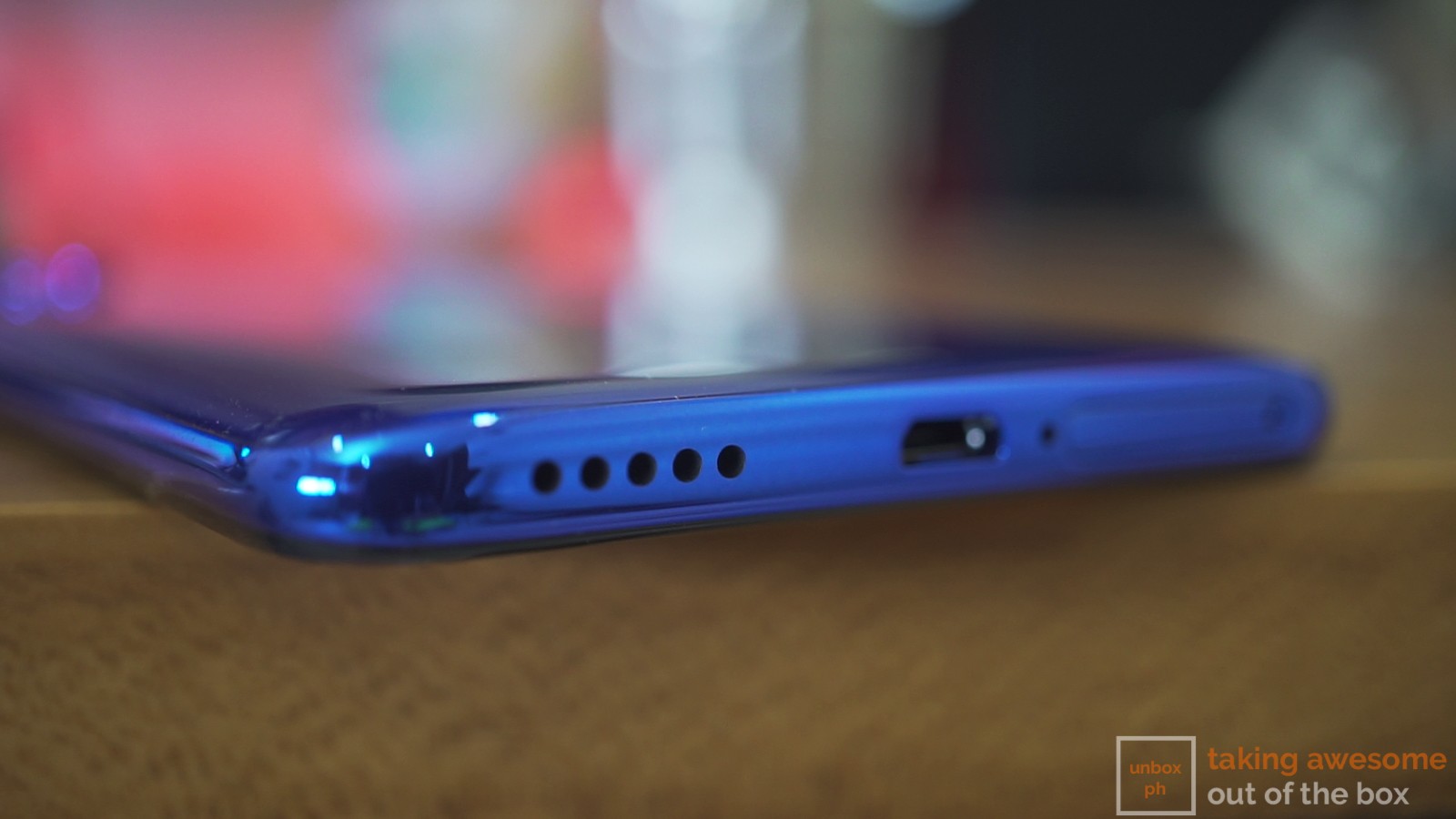 And on the bottom are the dual SIM tray, speaker grilles and — DUN, DUN, DUUUUUUUUN — a micro USB port. We’re really disappointed by the port choice here since they pushed a lot of innovative features on the phone but failed to upgrade it to USB-C port.

For shame, vivo. For shame. 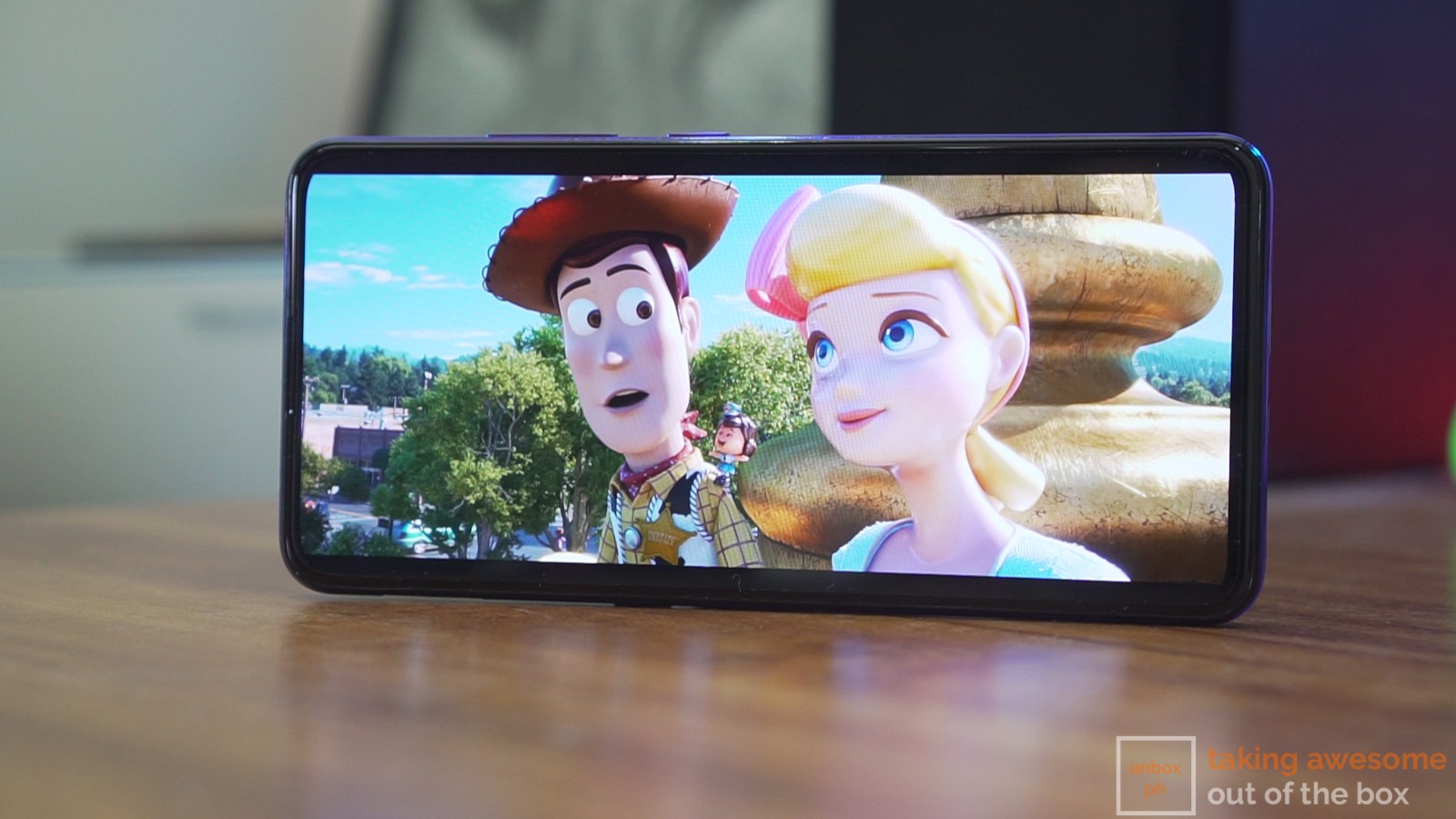 You have a 6.39-inch Full HD+ Super AMOLED Ultra FullView Display in front and since there’s no notch to speak off, you’re getting a screen-to-body ratio of nearly 92-percent and those bezels ARE pretty thin. Of course, you know that we’re head-over-heels with Super AMOLED panels so we definitely think that you guys will enjoy consuming content on this device as much as we have.

While the display on the V15 Pro is great, the audio aspect is a bit of a mixed bag. We tend to listen to a lot of podcasts and we’ve noticed that vocals can get quite tinny even with people who speak in a lower register. It’s a little more tolerable for instrumentals though lows are a little muddy too. We highly recommend using your favorite pair of cans so that you can fully enjoy the display of the V15 PRO without the audio getting in the way of the experience. 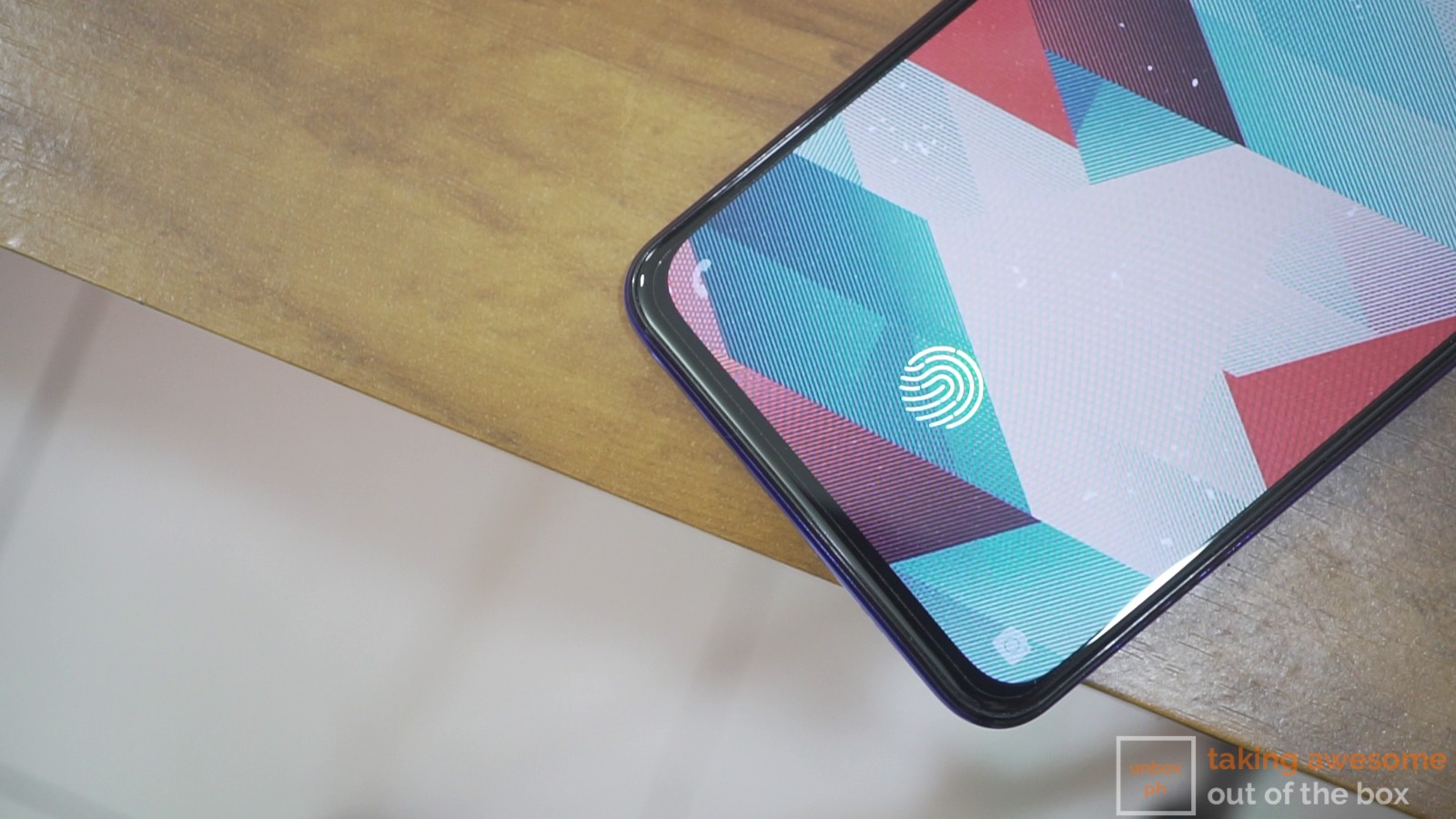 vivo also pretty much beat everyone to the punch when they unveiled their In-Display Fingerprint scanner and, while we weren’t huge fans of their first iteration, it has come a long way with the V15 Pro. It’s a lot more accurate this time around and the brand says that it thanks to 3 key upgrades they made to the feature to significantly lower the margin of error.

We suggest using this over facial recognition because not only is it more secure but you save the phone from raising and lowering the front camera each time you want to check your social media feeds. 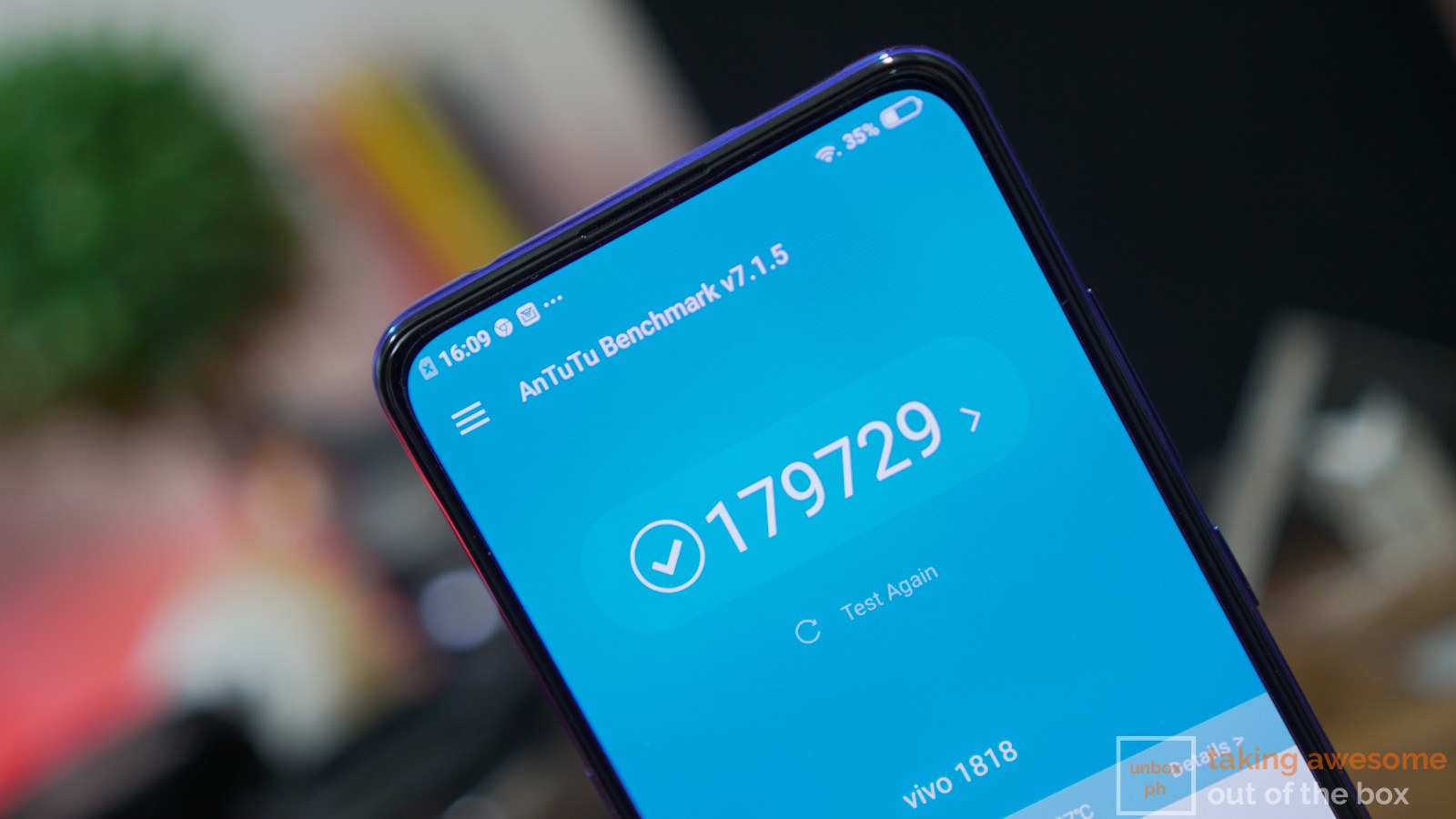 A Great Chipset with a Whole Lot of RAM and Storage

The vivo V15 Pro is powered by a Qualcomm Snapdragon 675 processor that has been more than enough for our day-to-day needs so far. Earlier we mentioned that the device we’re getting has more RAM at 8GB and we really appreciate that since we do tend to jump from app to app when we use our phones to work on-the-go.

In terms of benchmarks, it gets a significant bump up from the previous V series device and it actually handled some of the games we’ve been playing on this device quite well. There will be a separate gaming review for this device so stay tuned to our YouTube channel and don’t forget to subscribe for more updates about this device.

For software, the V15 Pro runs on Android Pie with FunTouch UI on top of it and it’s another one of those UI overlays with an Apple influence. You have to slide up from the bottom for the quick settings menu and you won’t be able to hide the clutter of your apps in a drawer either. There’s definitely more of a learning curve here and we do find ourselves face palming cause we do still swipe from the top to turn on things like Bluetooth on occasion. 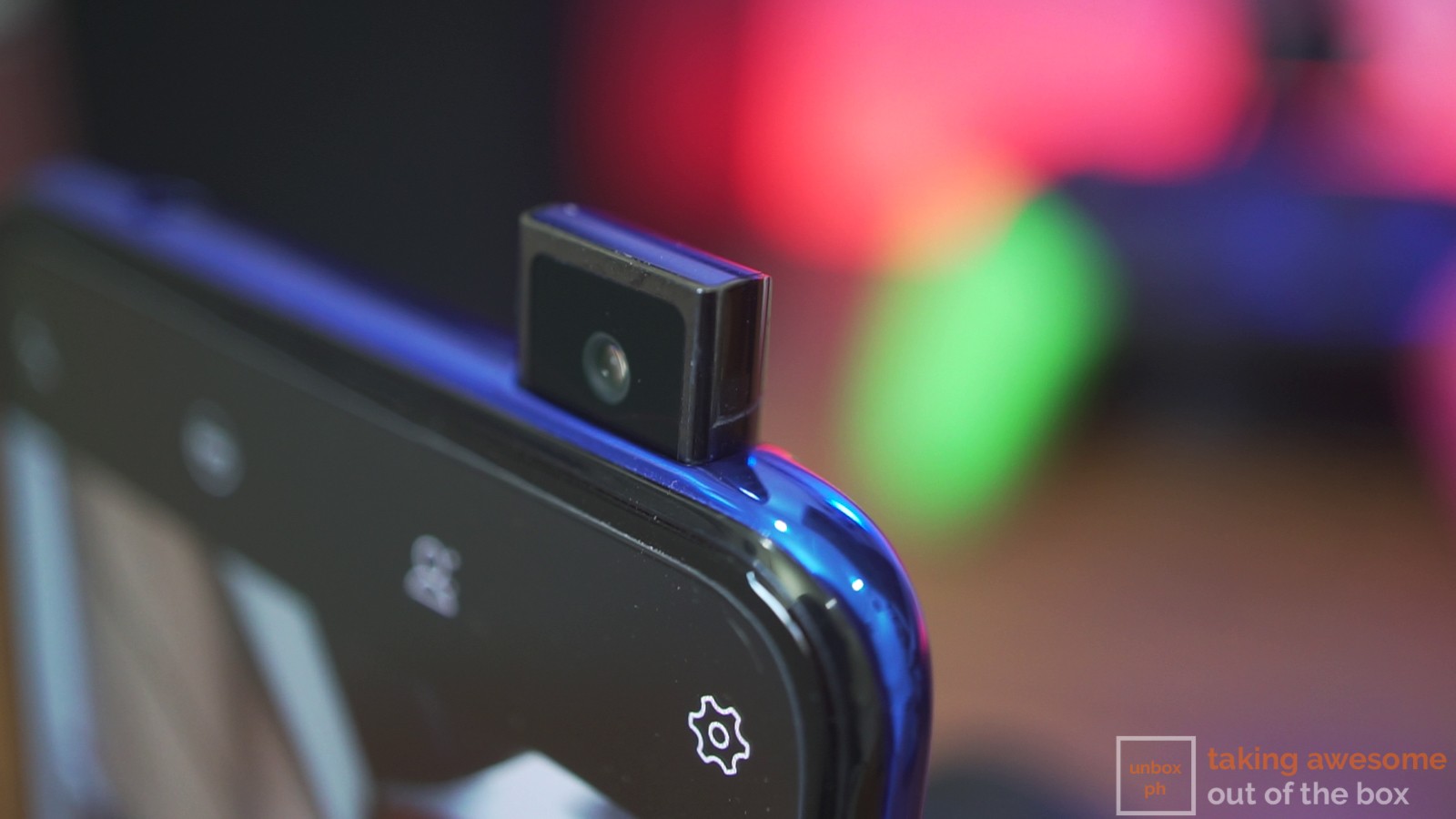 With the V15 Pro, vivo adopts the triple camera setup. You have a 48-megapixel main camera at f/1.8, there’s an 8-megapixel wide-angle camera at f/2.2 and having the option to shoot wide always gets a thumbs up from us, which leaves us with a 5-megapixel depth sensor. Despite that high-megapixel count, photos output to a default of 12-megapixel and you’re going to want to keep it that way. John has made a great article on phones with 48-megapixel cameras, which we highly encourage you guys to give a read.

The resulting photos from the cameras are pretty impressive. Images look to be sharp but there is a fair amount of post-processing from what’s being on the display compared to the final product. It doesn’t go too overboard but it’s definitely noticeable. We’ll reserve our judgment for our full review when we’ve really stretched out the legs of the V15 Pro’s cameras.

We’ve talked about the pop-up cameras on the V15 Pro quite a bit already but we’ve failed to mention that it actually holds the record of being the world’s first 32-megapixel pop-up shooter. Of course, all of that doesn’t matter if the resulting photos aren’t good so it’s good to know that there’s substance behind that claim.

We like how our initial selfies have turned out so far but, again, we’ll have to test it out more in different scenarios.

Now, vivo says that the mechanism has been tested so you can use the motors on the front camera at least 300,000 times. If you do the math and let’s say you check your phone 100 times a day or take 100 selfies a day, that’s still enough for it to last 8 years. We’re pretty sure you would have traded up by then. 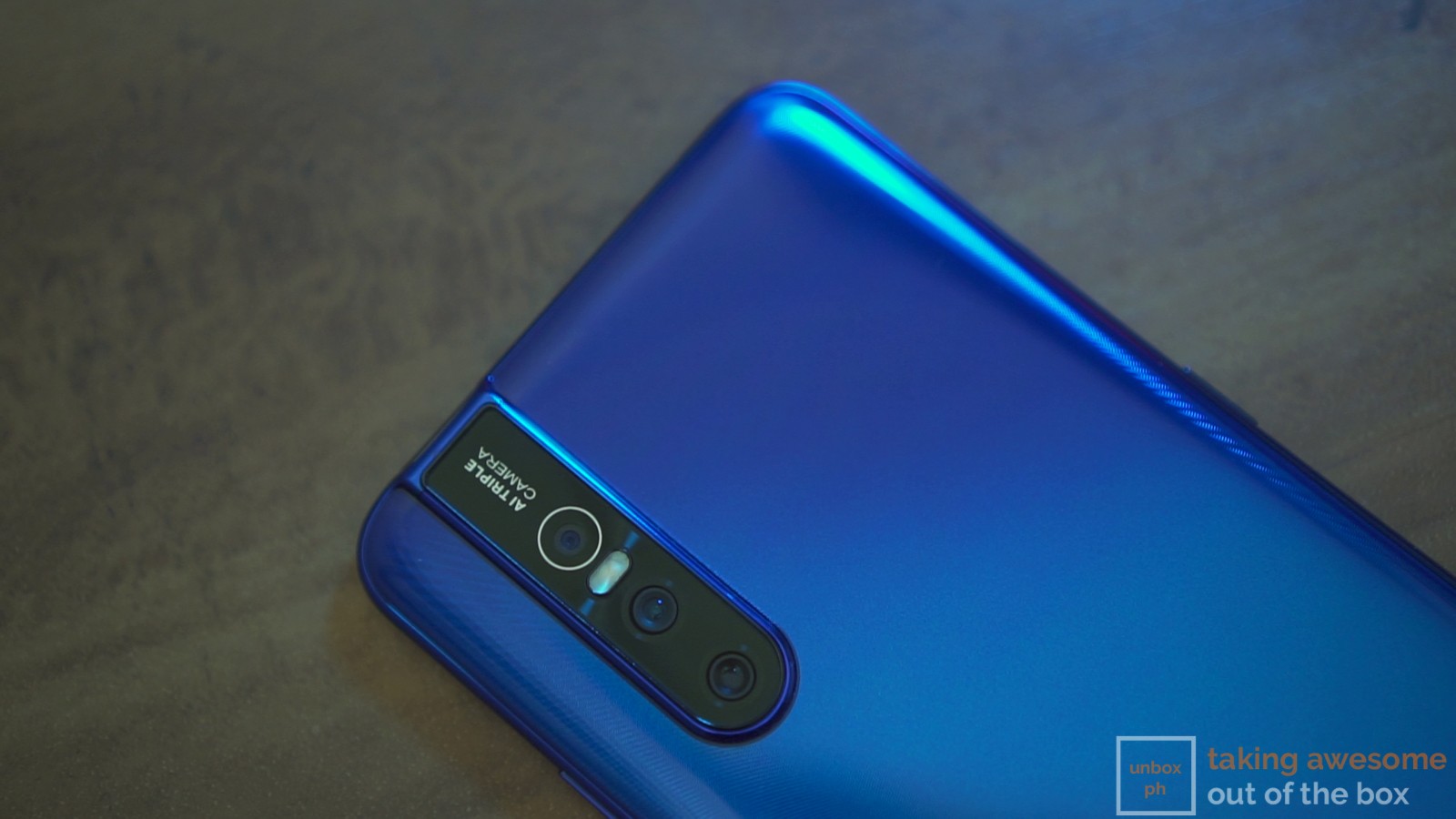 The vivo V15 Pro is juiced up by a 3700mAh battery that should give you at least a day and a half worth of power with browsing and a YouTube binger every now and then. However, if you’re a heavy gamer, you might find yourself running out of juice sooner since it seemed to have taken bigger sips when we busted out a quick game of NBA 2K19. We’ll have to investigate further but this might be a dealbreaker for those of you who treat your devices like handheld consoles.

When you do need to tether on to a power socket, vivo has included a 5V/2A charger and we’ve seen it give us around 20-25 percent in roughly 15-minutes, which is on point, given the marketing material we’ve seen about this aspect.

When Will It Be Available?

The vivo V15 Pro is priced at Php 23,999 and is currently available for pre-order from March 21 to April 11. Those pre-ordering will receive Php 7,500 worth of freebies that include 6 months extended warranty, Premium NBA case, Bluetooth speaker, and 6 months screen protection.

vivo Launches the V15 and V15 Pro in the Philippines

Galaxy A40 Renders, Specs Leak Ahead of Launch