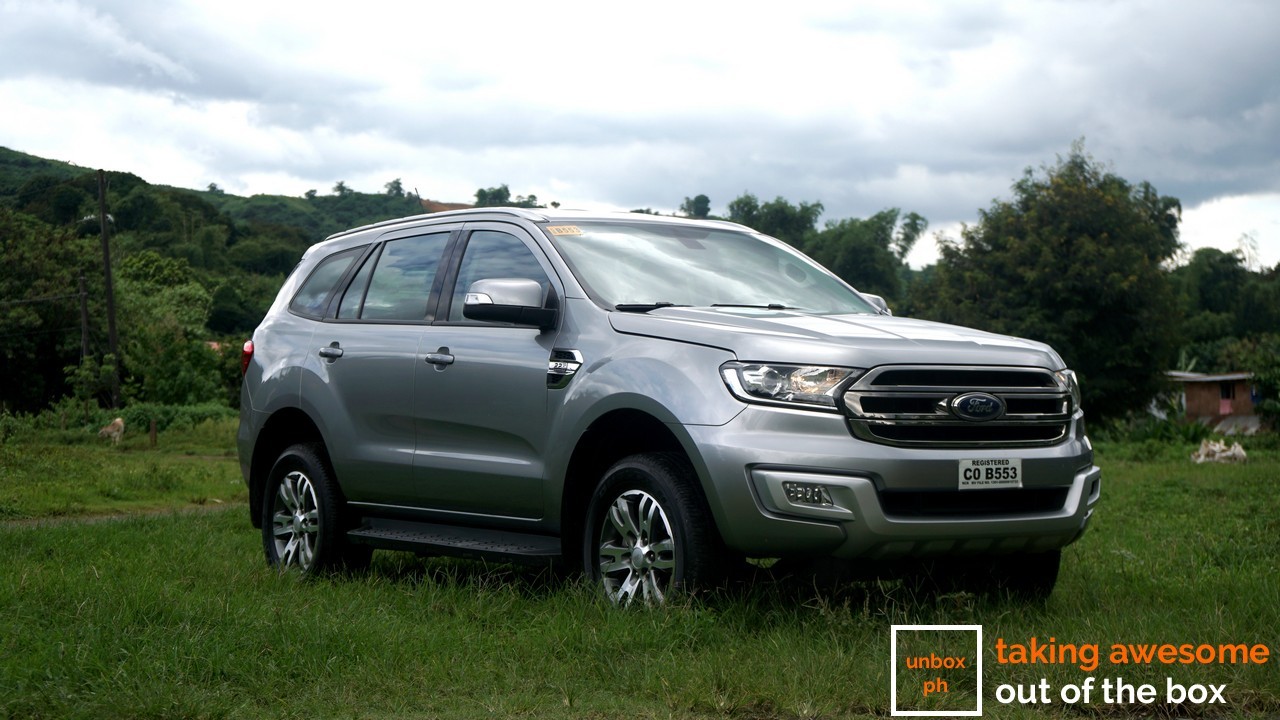 We take the Everest for a spin!

Ford handed us the keys to their current generation 2.2 Trend 4×2 AT Everest a few weeks ago, and it couldn’t have come at a better time. With errands to do in the north and monsoon rains battering the metro, the arrival of Ford’s 7-seater SUV was a god send.

While this particular model has been on the road for a while, we were still glad to have a chance to drive this behemoth as we navigated the flood-strewn roads of the metro. With roads like ours, it’s no wonder that SUVs like the Everest are fast becoming the preferred rides of many families in the Philippines. 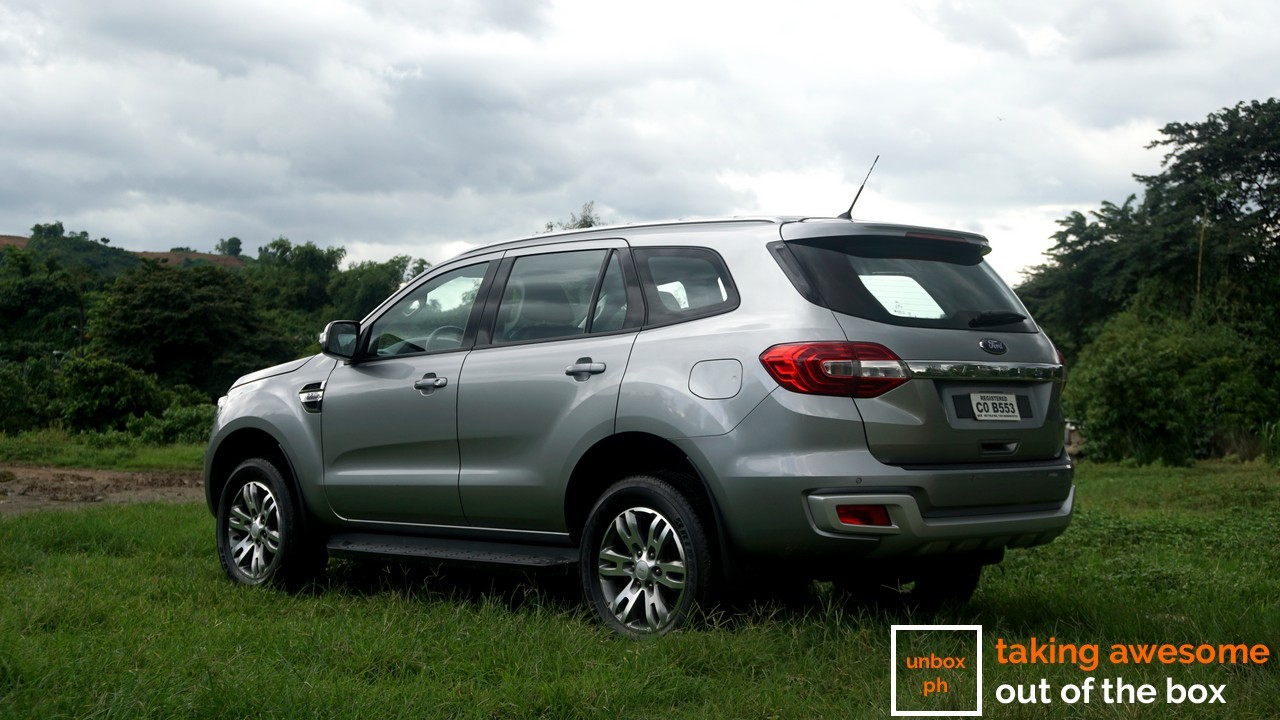 While other manufacturers like Mitsubishi and Toyota try to soften the exterior of their vehicles to look sleek and sexy, the Everest goes the opposite direction. The front is dominated by a 3-bar hexagonal grille, with halogen lights and DRLs flanking it on both sides.

The utilitarian brutish looks of the Everest is derived from Ford’s Ranger pick-up line, which gives the vehicle a distinct “you don’t want to mess with me” look when it’s traversing Manila’s roads. 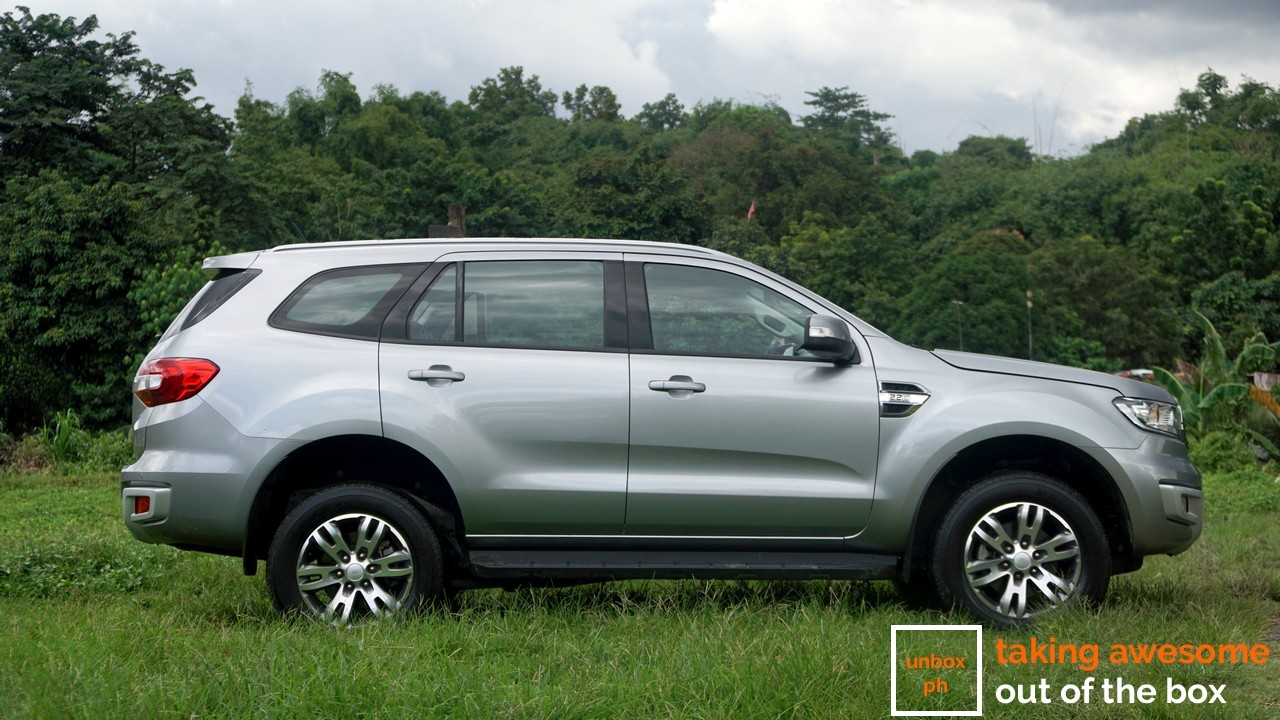 Thanks to a wading depth of 800m and a ground clearance of 225, the Everest can easily wade through ankle-high floodwaters without any problems, which came in handy during the particularly bad monsoon rains that inundated us a few weeks ago. 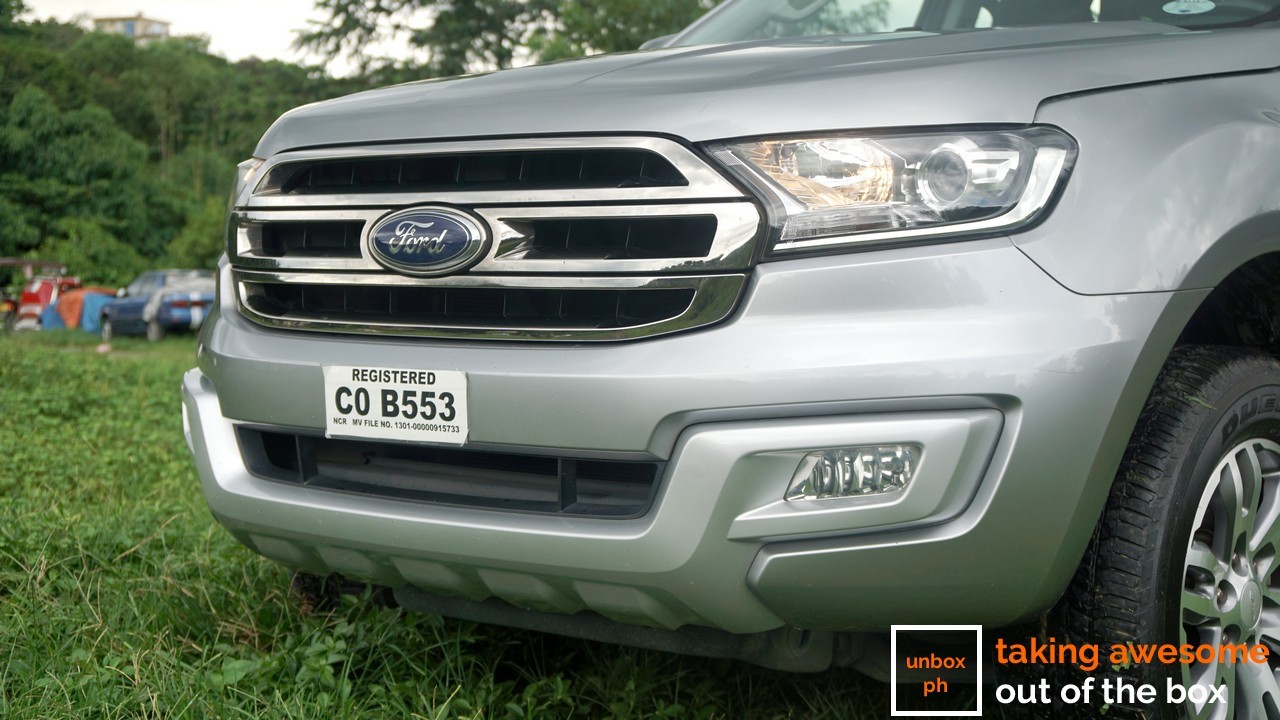 That tough, brutish design is spread everywhere, and overall the Everest looks like a beefy SUV that’s rugged on the outside but comfy and refined on the inside. 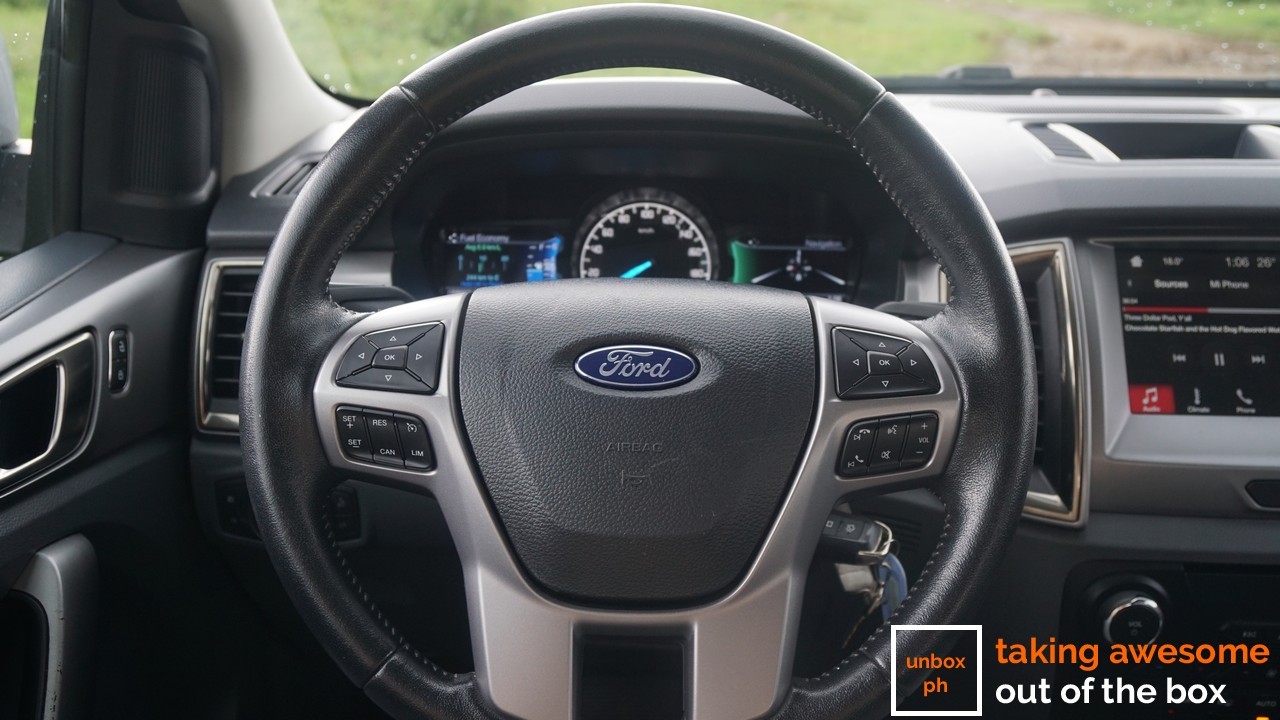 Lots of tech on the inside may confuse some, but the interior is hella lush

Thanks to the Everest’s large footprint, the cabin is extremely roomy, with enough space for big dudes like me to settle in comfortably.

Aside from the speedo, the gauges are entirely digital, and you can switch through multiple screens to see fuel economy, RPMs, navigation information, what music is playing and so on and so forth. 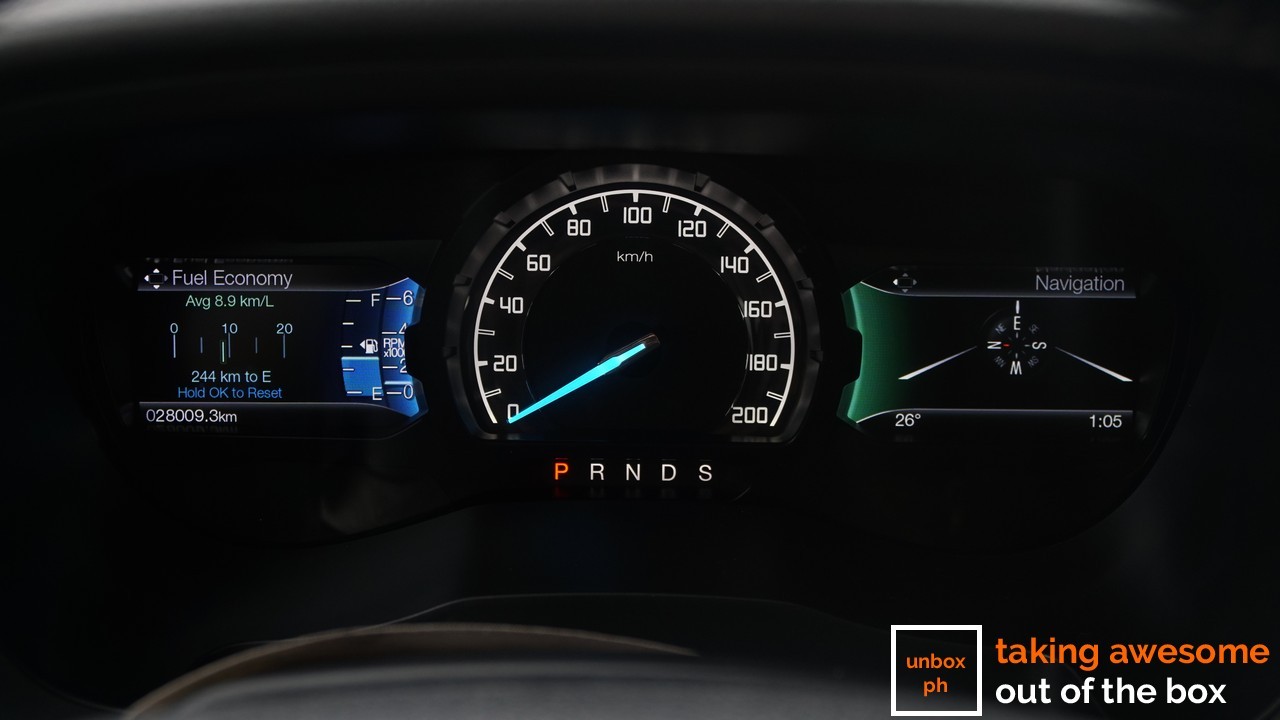 While I didn’t have trouble navigating and using the cluster, I’d imagine more analog-minded folk may have a little bit of a learning curve with it.

The rest of the controls are thoughtfully laid out, though there’s quite a number of buttons and controls on the steering wheel.

One thing we were puzzled to learn is that the steering wheel has no reach adjustment at all. Thankfully, the driver’s seat has powered adjustment so you can compensate that way. Not perfect, but it gets the job done. 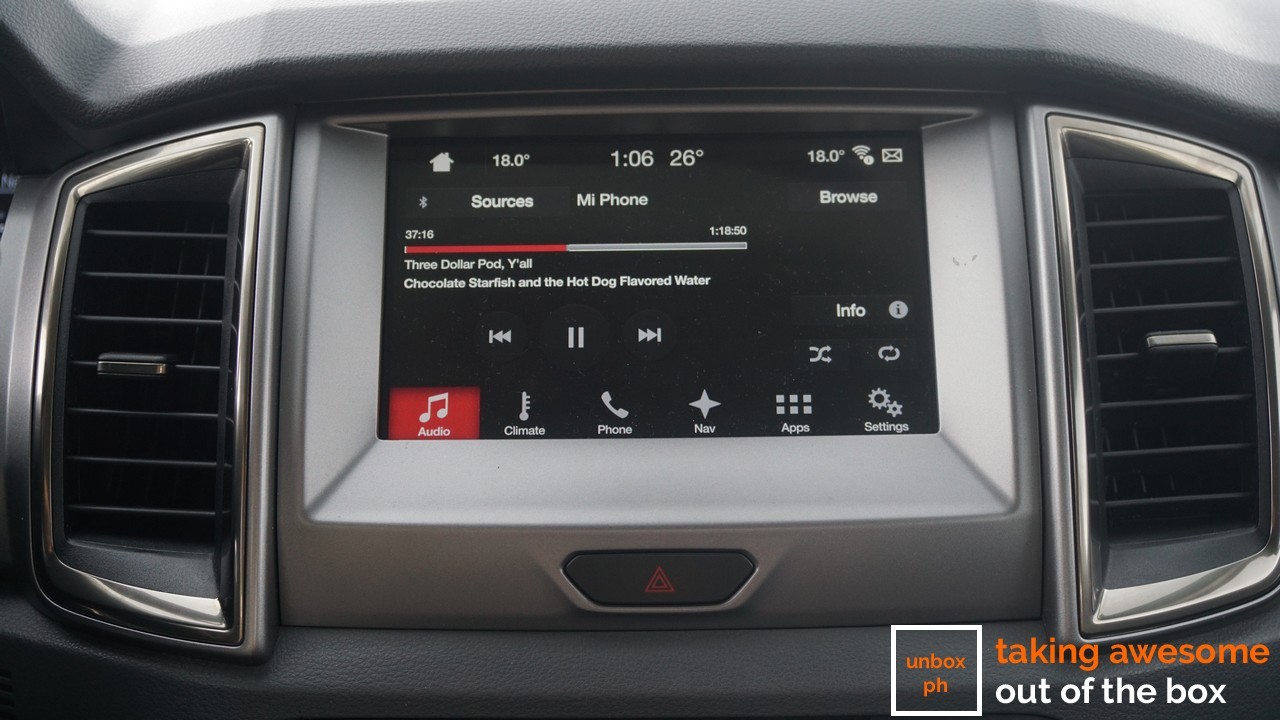 The 8-inch touchscreen is powered by Ford’s Sync 3 technology and is capable of running Android Auto. Pairing our Xiaomi Mi 9T was quick and easy, and the 10 speakers scattered throughout the vehicle delivered excellent sound overall.

The seats are leather at this trim level making the Everest comfortable to drive even when you’re stuck in 2-hour traffic. 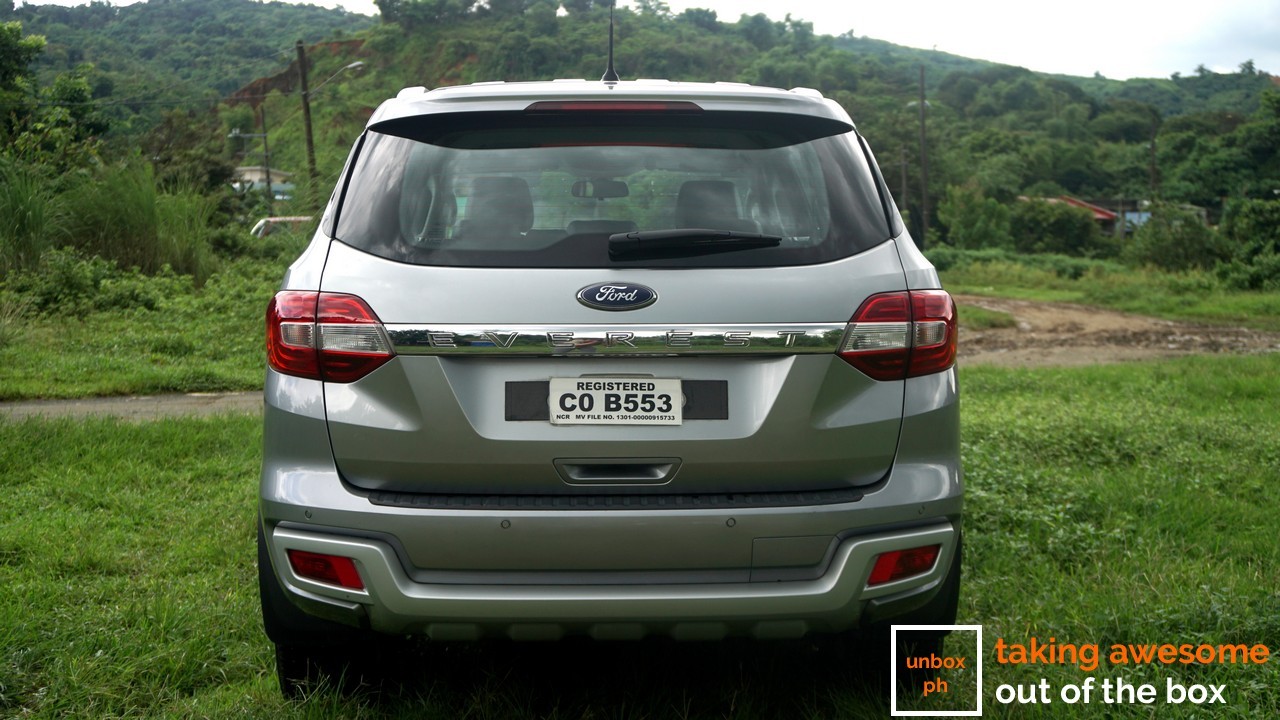 Small additions to the Everest make it a great drivers car: rain-sensing wipers, lumbar support for Tito backs as well as automatic headlights make driving a little more bearable especially during rush hour. Independent climate control for both the driver and front-seat passenger is a nice touch, especially when they have different thermal thresholds (AKA lamigin) compared to you. 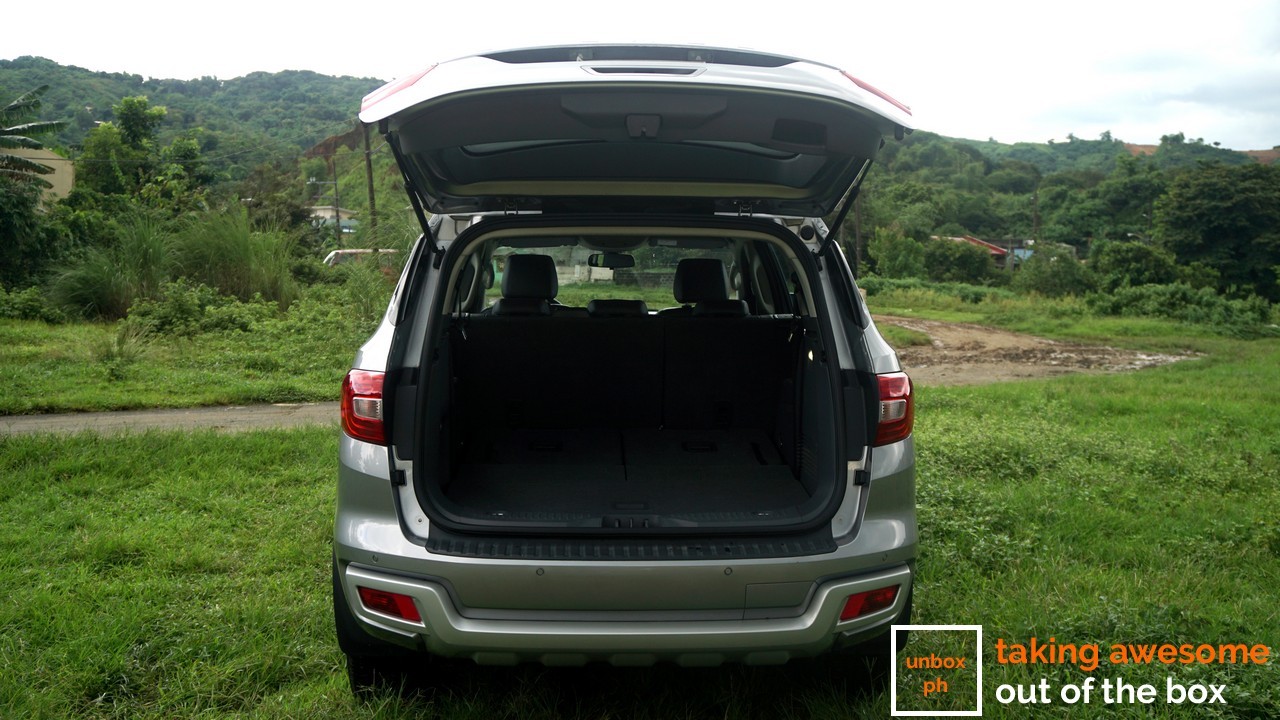 That same feeling of comfiness translates to the 2nd row which can seat three people, though space might be a little cramped at the third row especially if your passengers are big boys (or gals). There is dual-zone climate control for the people at the back too.

All of the rear seats fold, with the second row folding 60-40 and the third row completely folding flat. 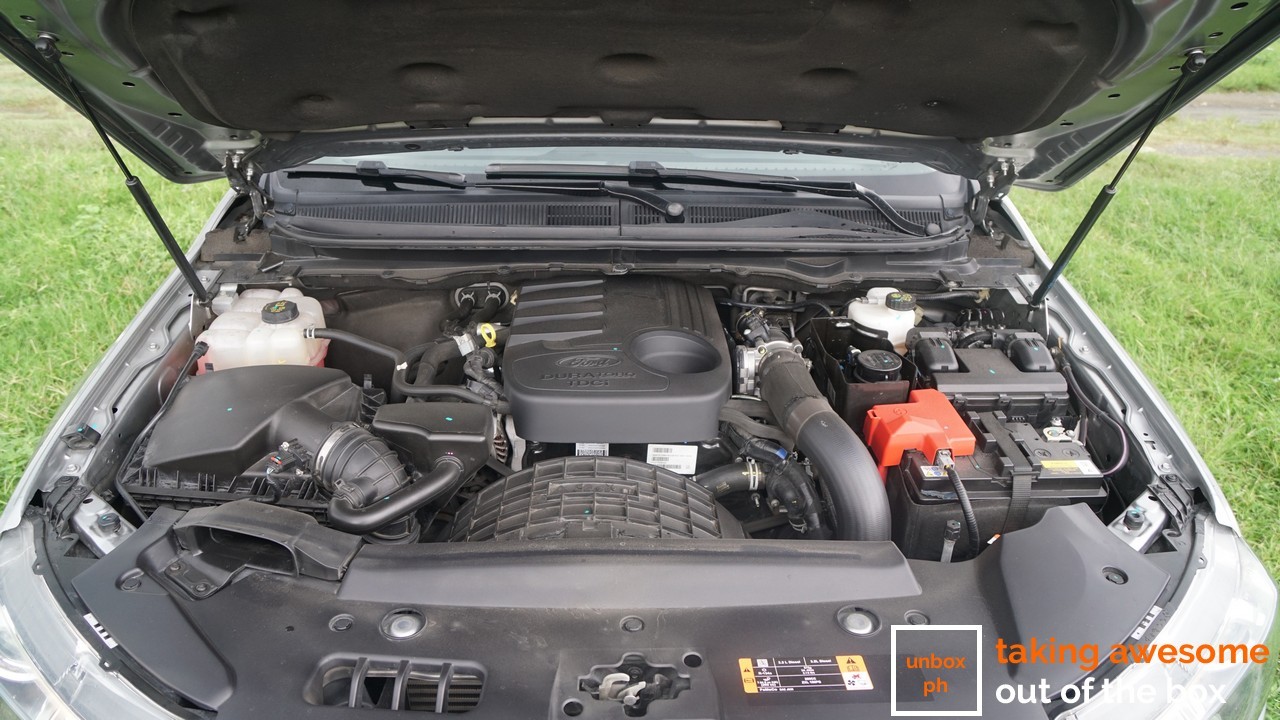 Power-to-weight ain’t great, but it’ll get you where you need to be

The Trend trim of the Everest comes with a 4-cylinder 2.2L TDCi turbo diesel engine that produces around 158HP and 385NM of torque. That’s mated to a 6-Speed automatic transmission.

The front suspension is an independent, double-wishbone type with coil-over shocks and an anti-roll bar, while the rear is a multi-link rigid axle with coil springs. The suspension dampens the ride well, but because of the Everest’s height, there’s noticeable body roll especially on winding roads. 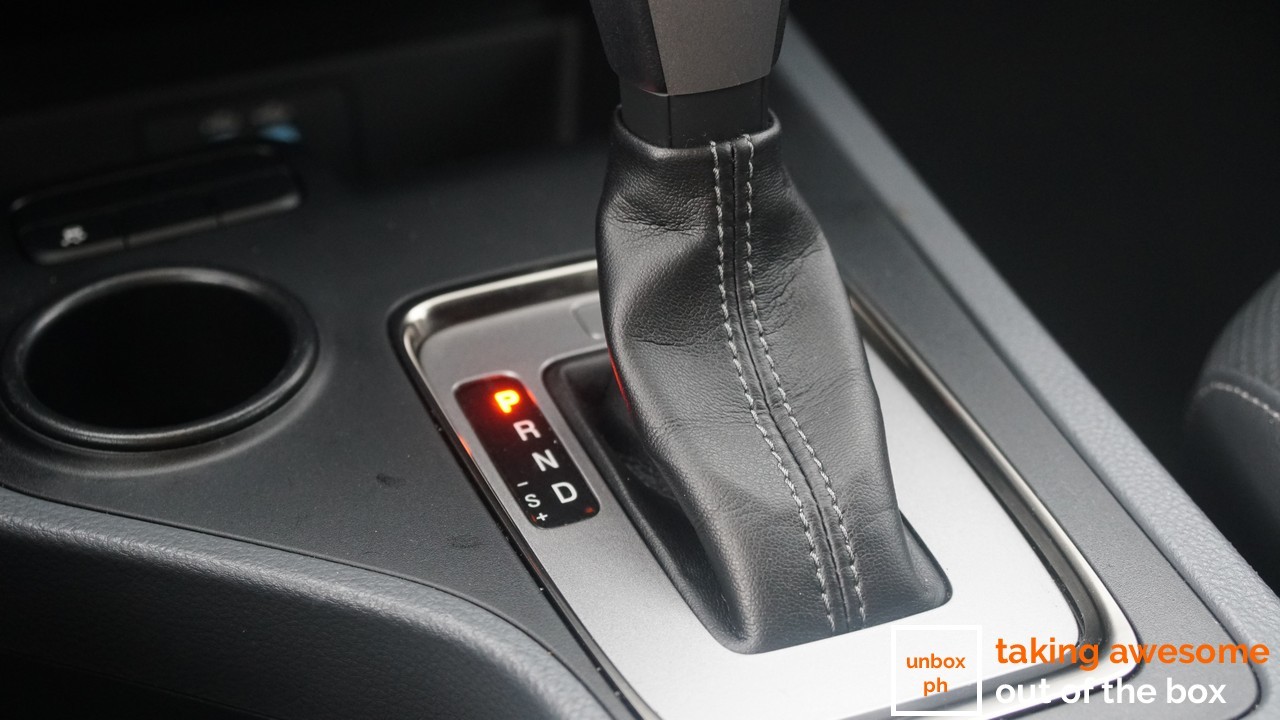 Power-to-weight isn’t that great, considering the Everest’s size but the Everest had enough oomph to keep it running easily at the speed limit during our northern trek. One thing that really surprised me was the Everest’s extremely light steering wheel, which made it easy to get around tight spots despite its size. The Everest is drive by wire, thanks to the electronic power-assisted steering (EPAS) system, which keeps the wheel feeling light during slow speeds and tightens when the needle creeps up the speedo.

As for fuel efficiency, we got around 9KM/L on combined highway and city driving, which is just right for an SUV of this size. 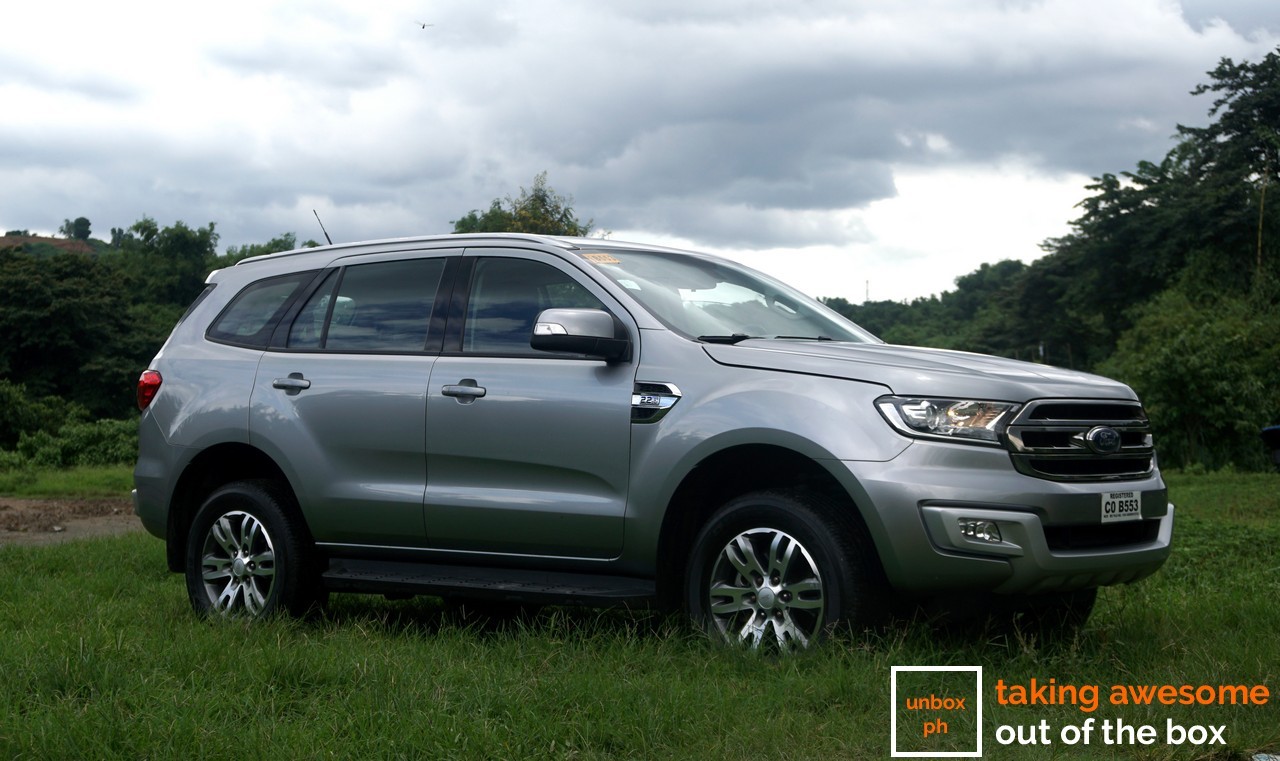 As I drive in my sedan avoiding yet another flooded road to get to an event, I suddenly miss the brutish, beautiful chunk of steel that is the Ford Everest. The ability to wade through many of Manila’s flooded streets in relative comfort is a great asset, though only really loaded families can really get it, thanks to its steep price tag.

The current generation Everest starts at Php 1.521 million for the Ambiente variant, which sheds many of the luxuries that we enjoyed with the Trend variant lent to us, which is priced at Php 1.718. If you had even more cash you can probably go all out and buy the 3.2L 4X4 Titanium variant, which goes for a cool Php 2.288 million.