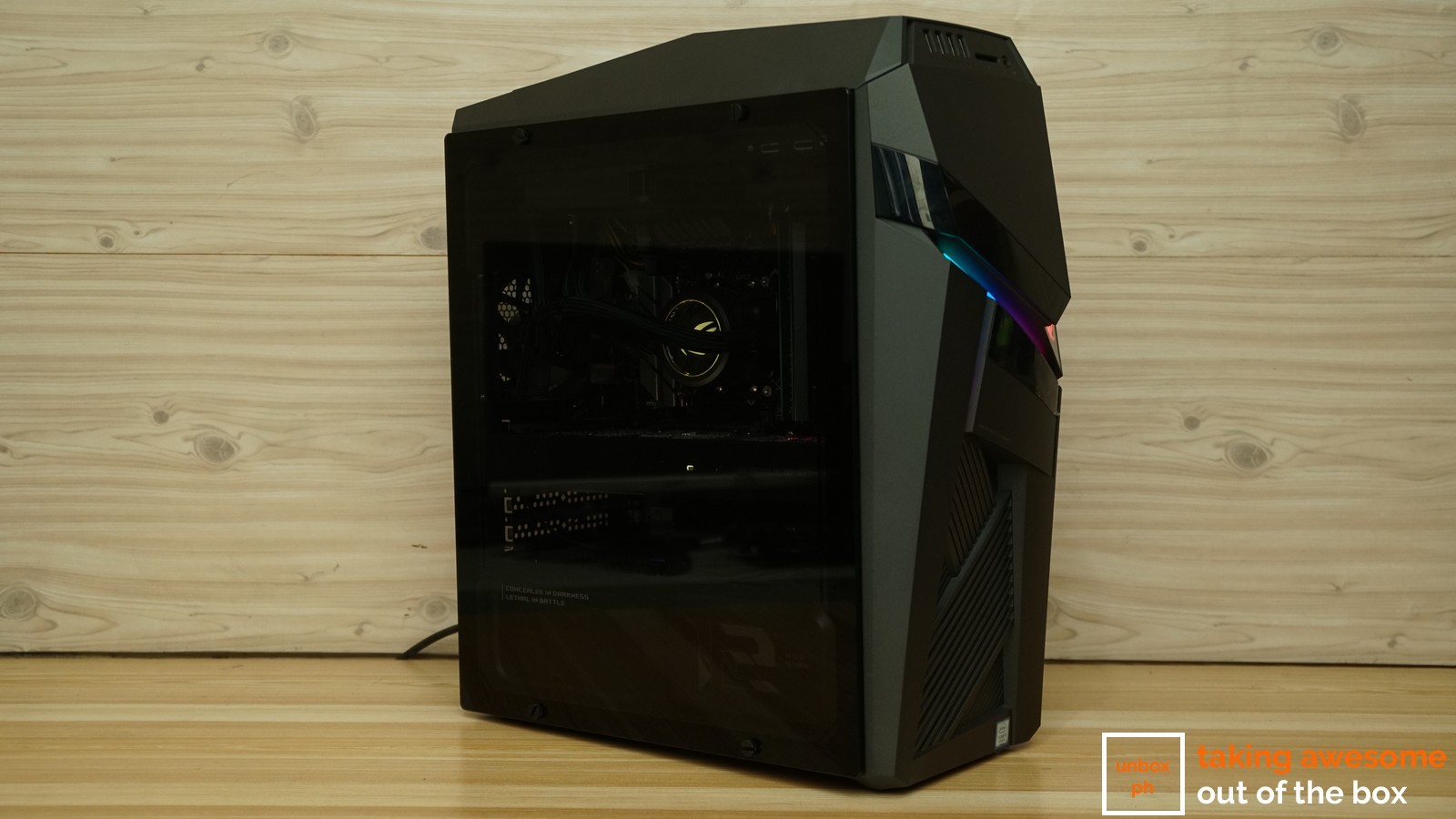 We review this upgraded tower from ASUS!

We reviewed ASUS’ tricked out, pre-built tower of power, the ROG GL12 last year, and found it to be the perfect choice for people who wanted a powerful gaming rig without having to build one themselves. A lot’s happened since then, and NVIDIA and Intel have come out with newer, shinier hardware that has dated the original desktop quite a bit since its launch.

So it’s no surprise that ASUS has updated the guts of the GL12 with new pieces of silicone from both the blue and green team, resulting in the new, eSports focused ROG Strix GL12CX that’s even more powerful (and expensive) than ever before. 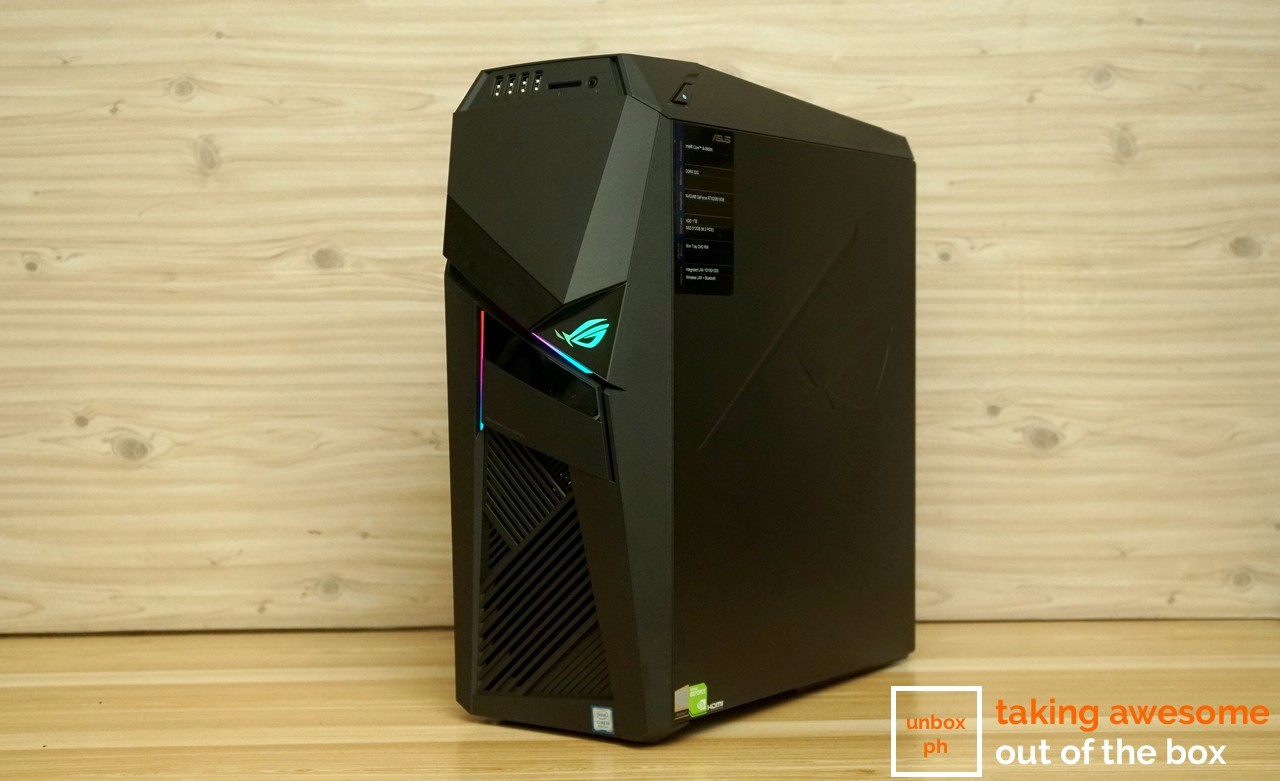 An aggressive design that shows off the goodies inside

The updated Strix GL12 shares the same external design as the model launched last year. The desktop has aggressive lines and plenty of RGB lighting strips on the outside, which is to be expected with most gaming products nowadays. 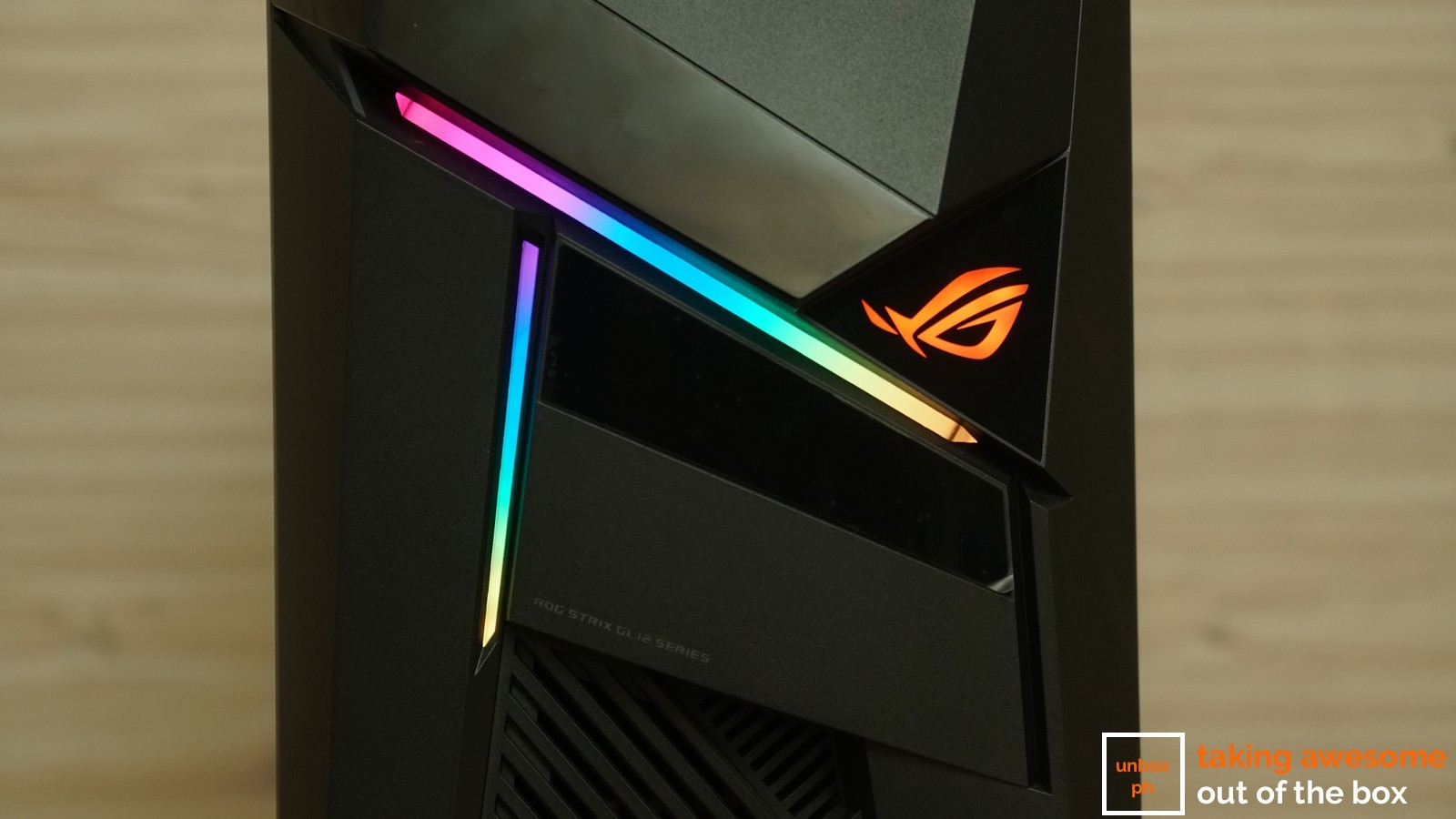 The desktop is quite heavy, tipping the scales at around 11 kilos, or around 24.3 pounds. 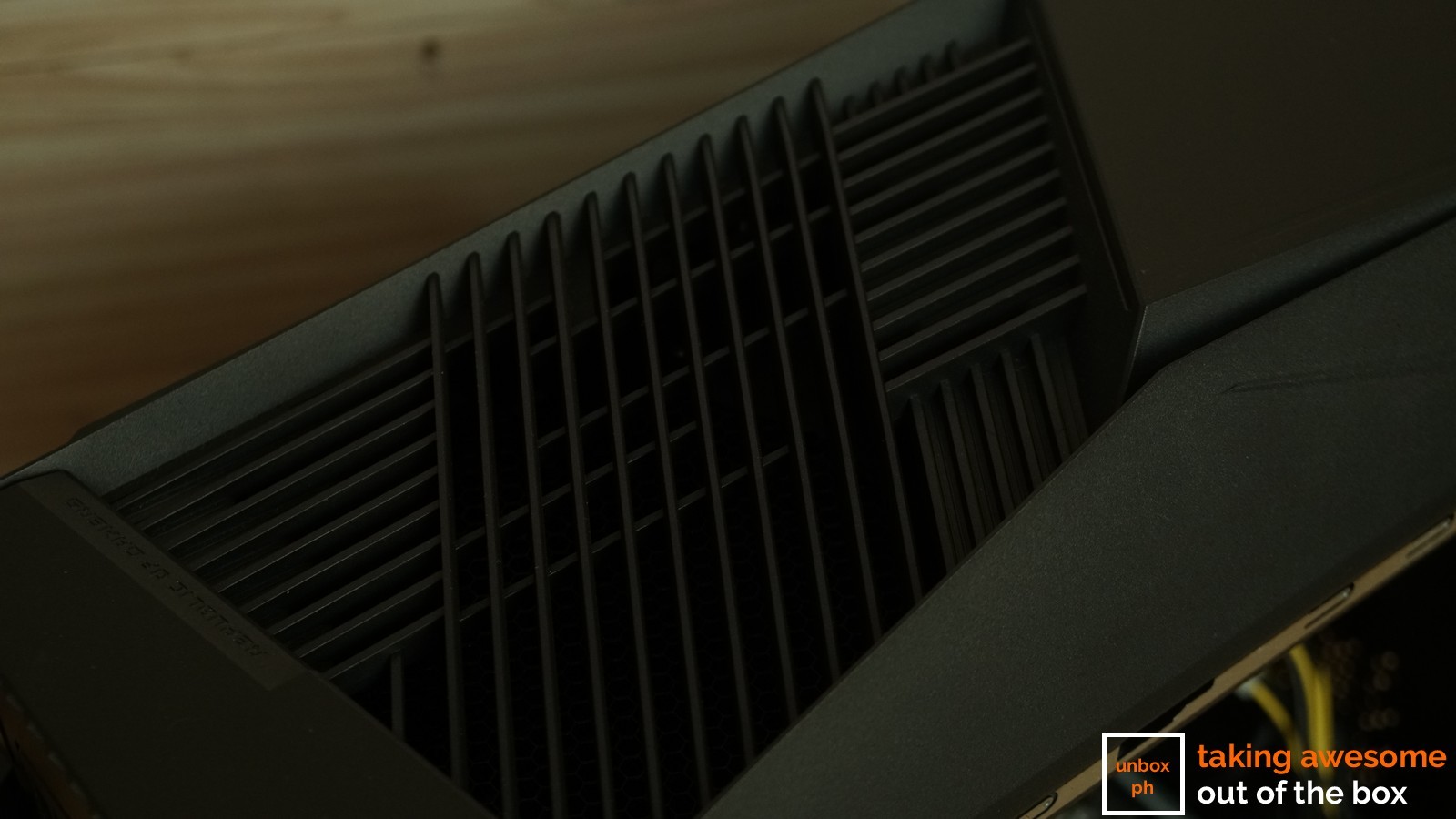 There’s plenty of intakes and exhaust ports on the desktop ensuring positive airflow, important when you’re trying to overclock this thing for better performance. The front of the case houses a magnetic front plate that you can remove to access a hot-swappable SSD tray and the ancient and long-obsolete CD drive. 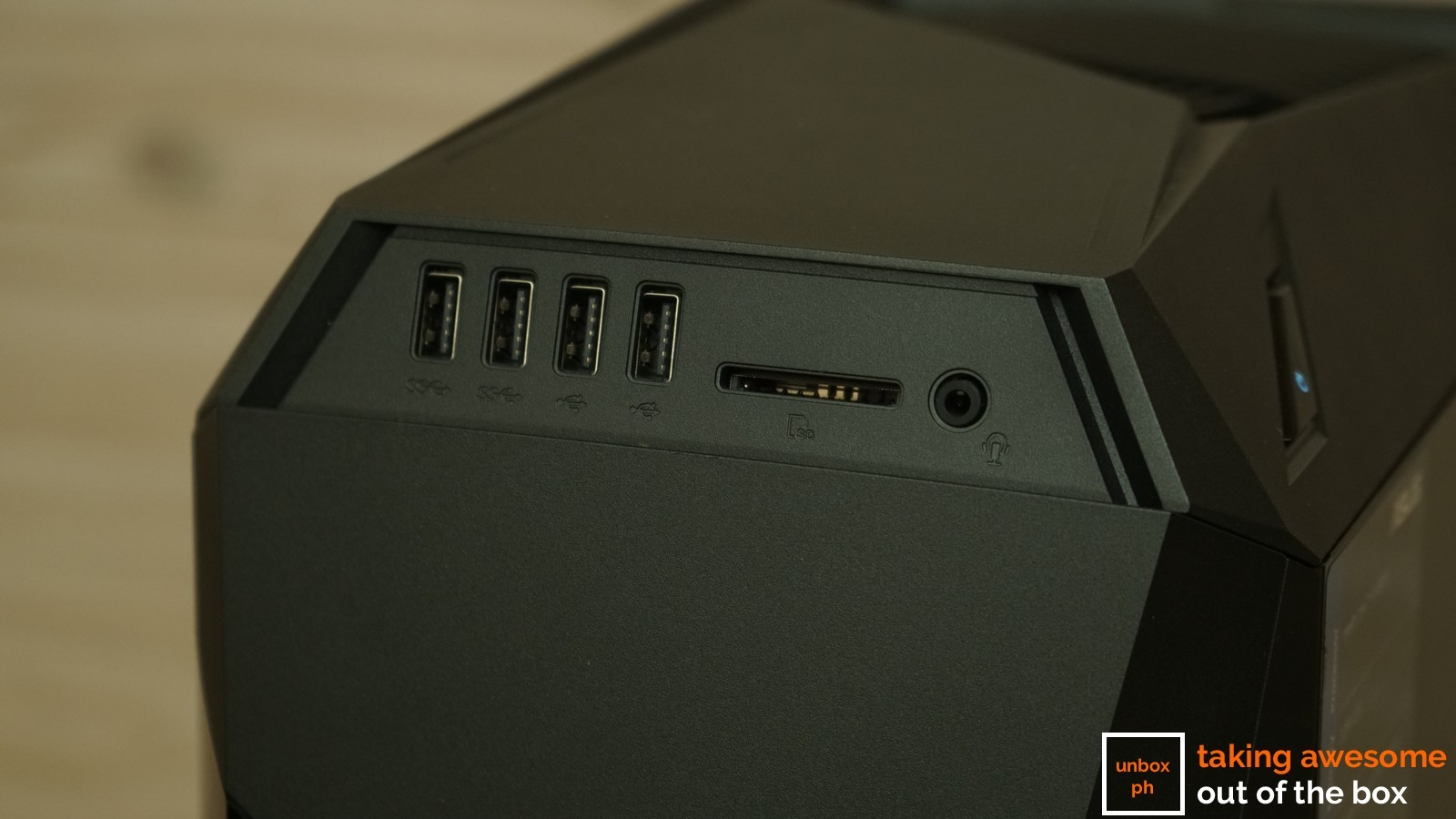 We love the fact that there are tons of USB ports on the front of the machine, which means we don’t have to mess around at the back if we need to connect a temporary accessory like a flash drive or a USB cable. 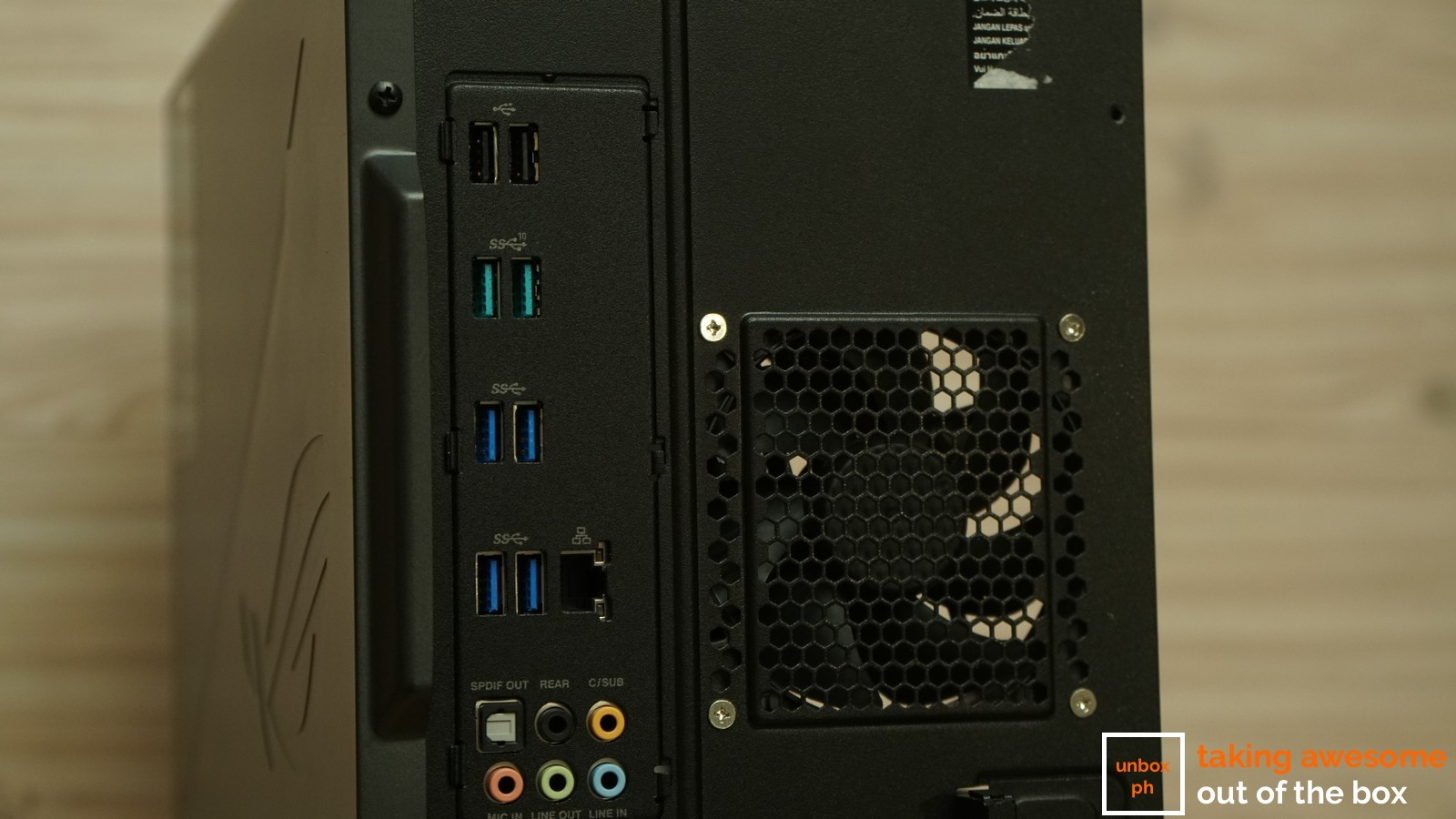 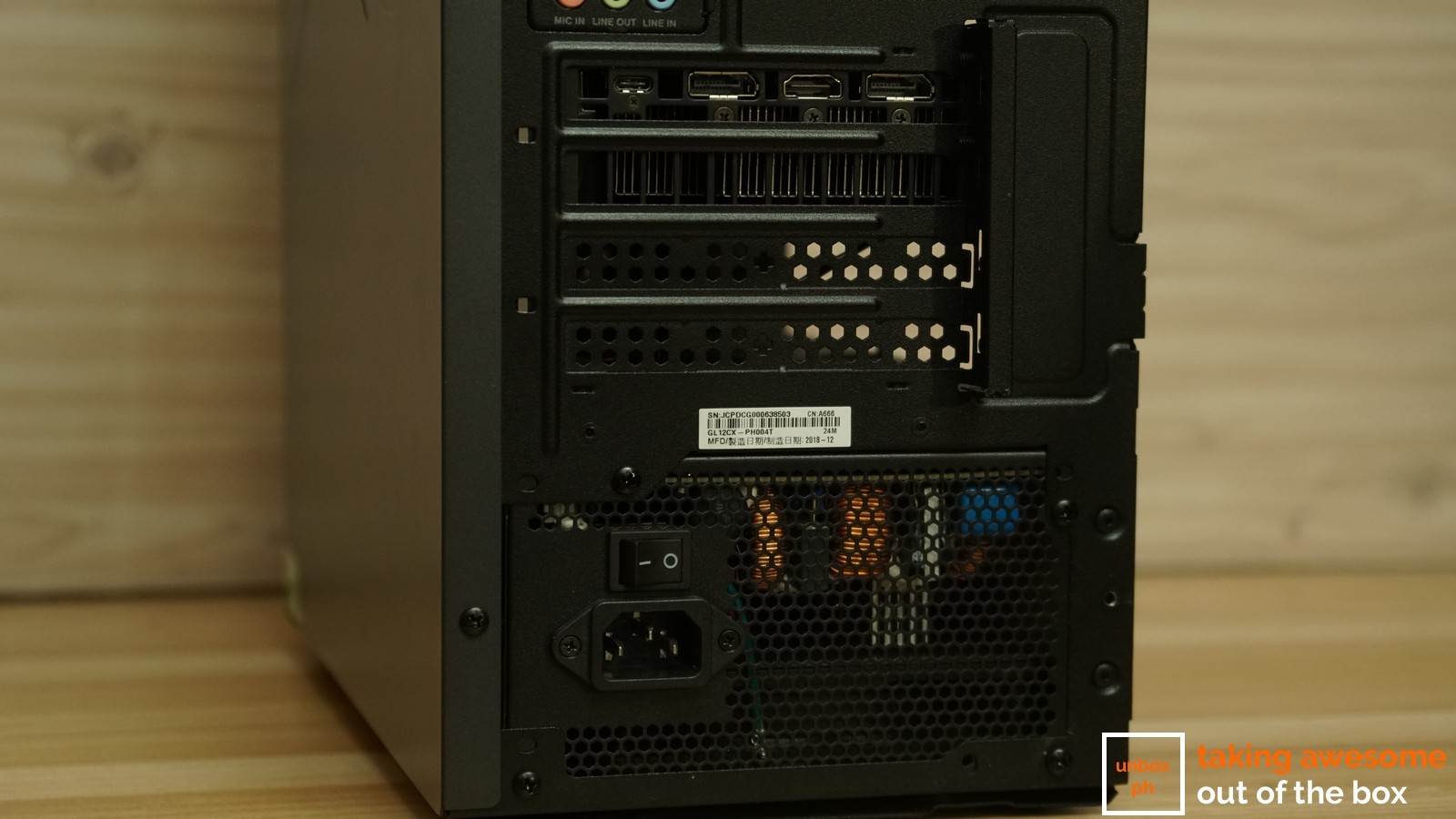 You can opt to use the metal side panel to keep the internals away from prying eyes, though most often than not you’ll probably be running the transparent panel to show off the expensive hardware inside, lit by a ton of RGB lighting that you can customize via ASUS’ Armory Crate software. 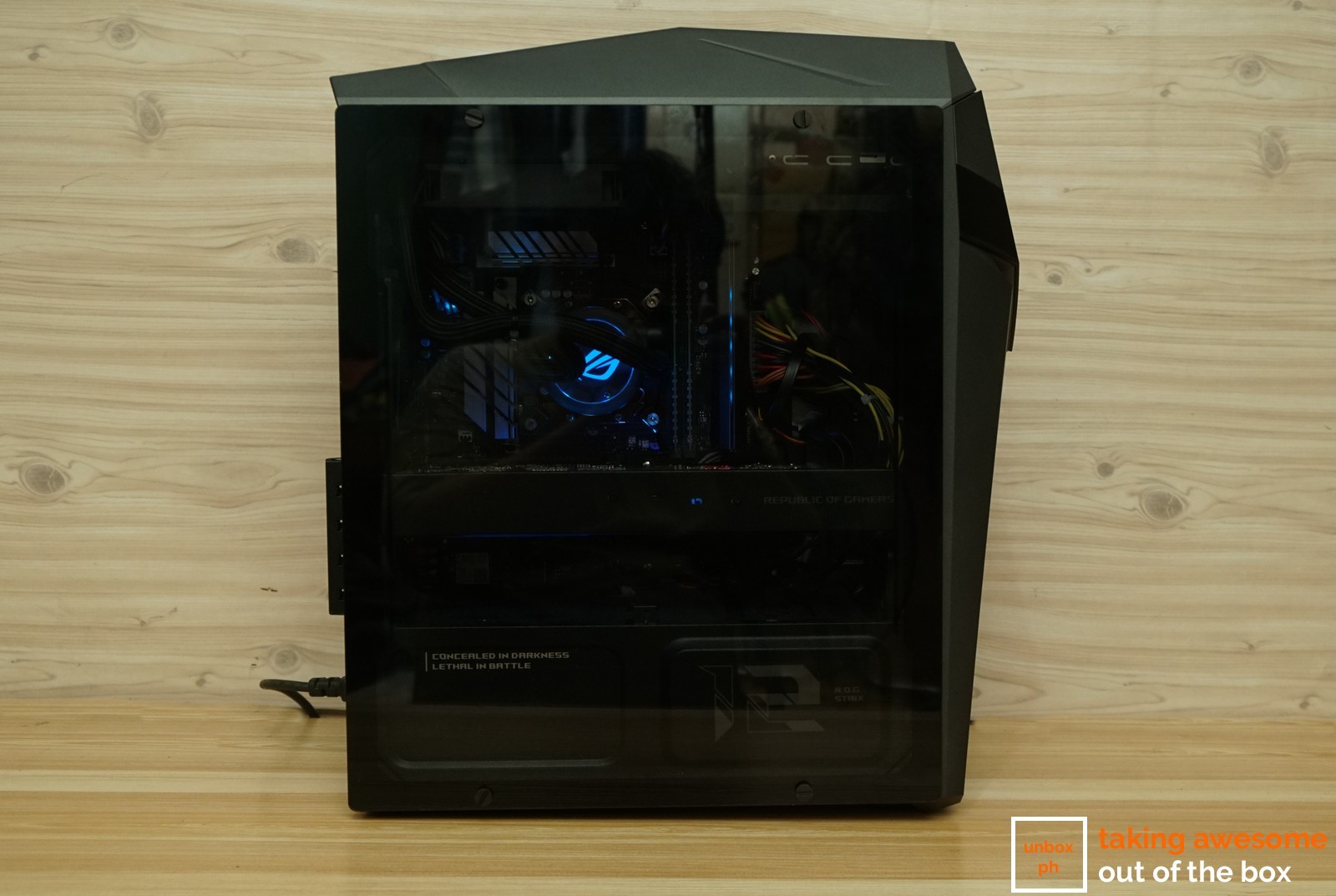 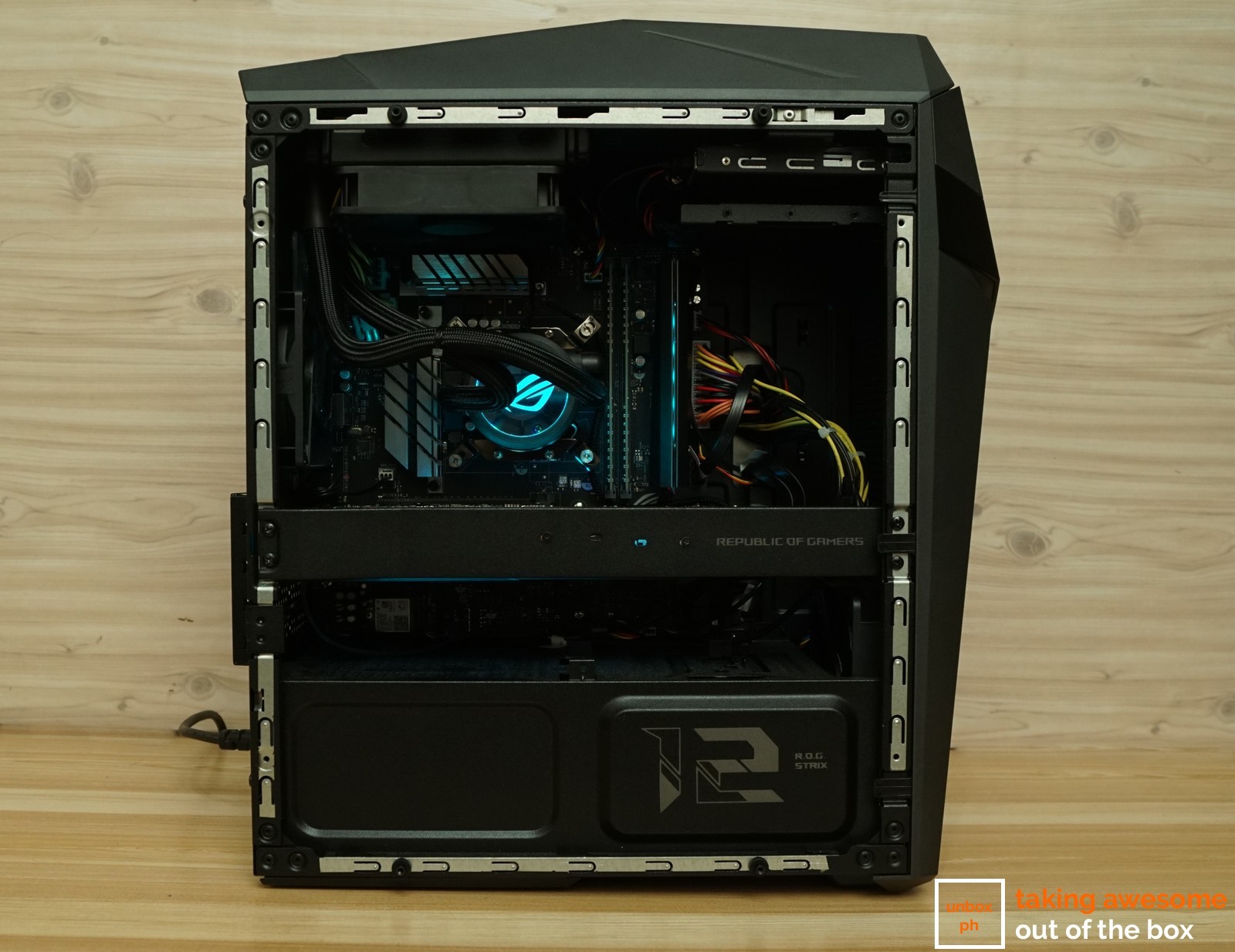 Take out the side panel and you’ll be able to see the neatly laid out interior of the desktop. Just like before ASUS separated the PSU and the rest of the components so that hot air doesn’t recirculate in the space, which should result in cooler temperatures. 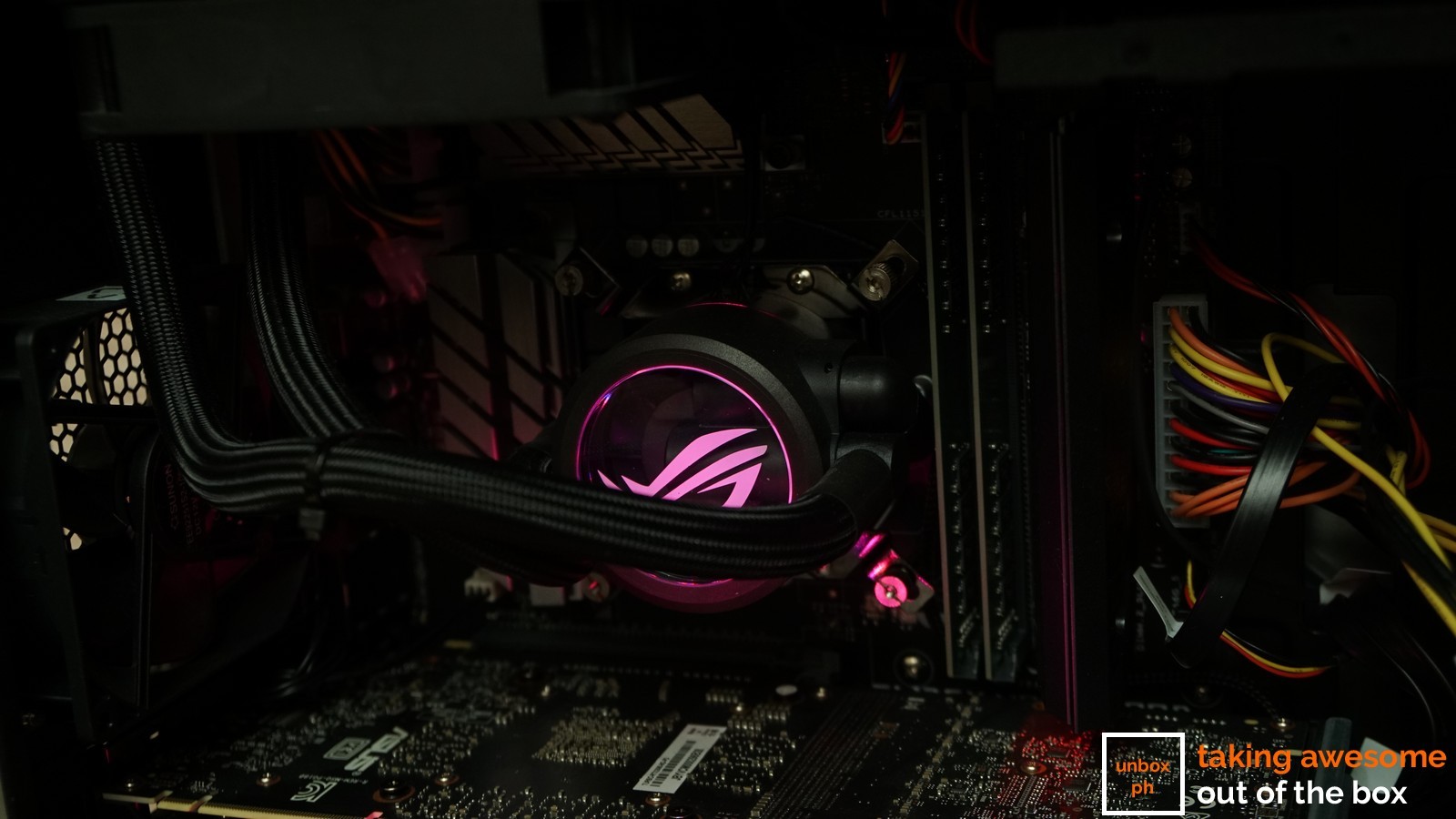 Speaking of cooling, the new desktop is still liquid-cooled, though ASUS used a newer, cooler-looking solution this time around to keep the processor’s temperature down.

There’s a cross brace in the middle of the desktop which adds to the overall rigidity of the desktop, important since ASUS is positioning this as an eSports-friendly machine that’s meant to be transported to arenas and other locations when needed. 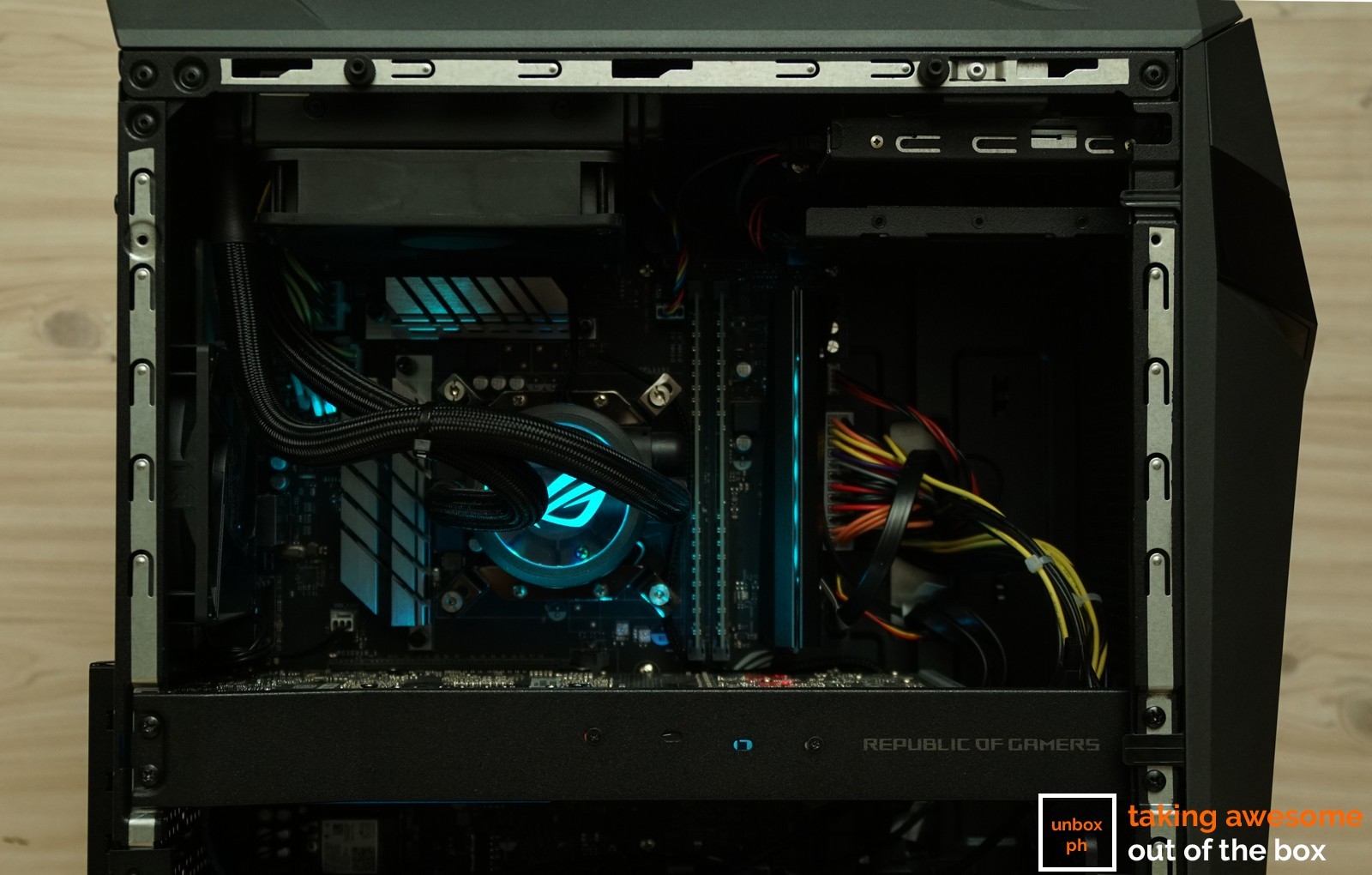 An overpowered desktop that shouldn’t be nerfed

The new model comes with brand new hardware from both Intel and NVIDIA: you’re getting an NVIDIA GeForce RTX 2080 GPU, along with Intel’s Core i9-9900K processor, along with 32GB of RAM, 1TB of HDD storage and 512GB PCI-E NVMe storage.

The i9-9900K processor is a great piece of kit for content creators and streamers alike thanks to its Hyper-Threading tech (which isn’t present on Core i7 processors for the 9th generation). Keeping it cool is a Cooler Master MasterLiquid Pro 120mm closed-loop liquid cooler, giving owners a bit more thermal headroom when overclocking.

With the hardware combination, it’s not surprising that the desktop posted very high numbers in synthetic benchmarks as well as games. Take a look at yourself: 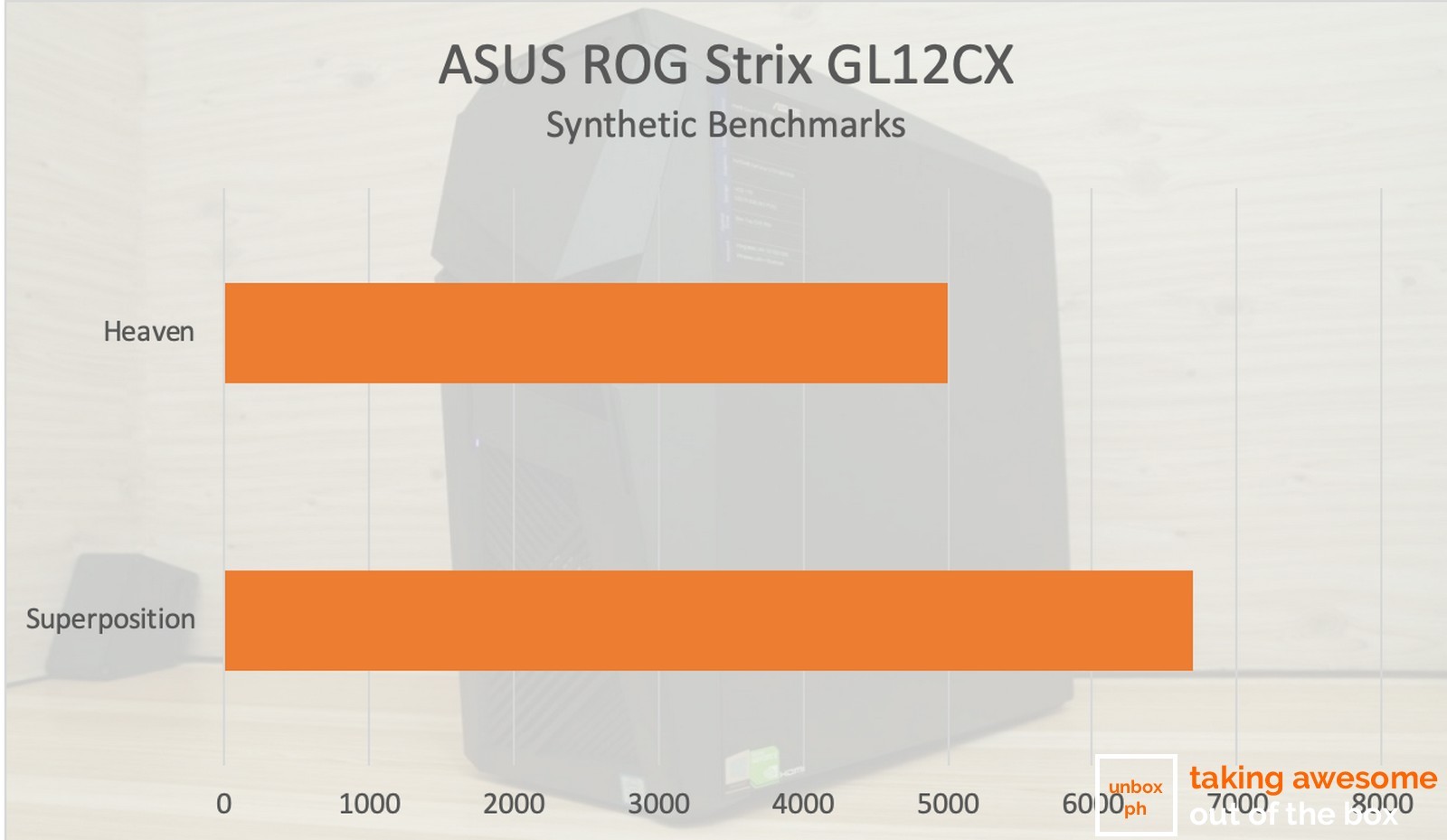 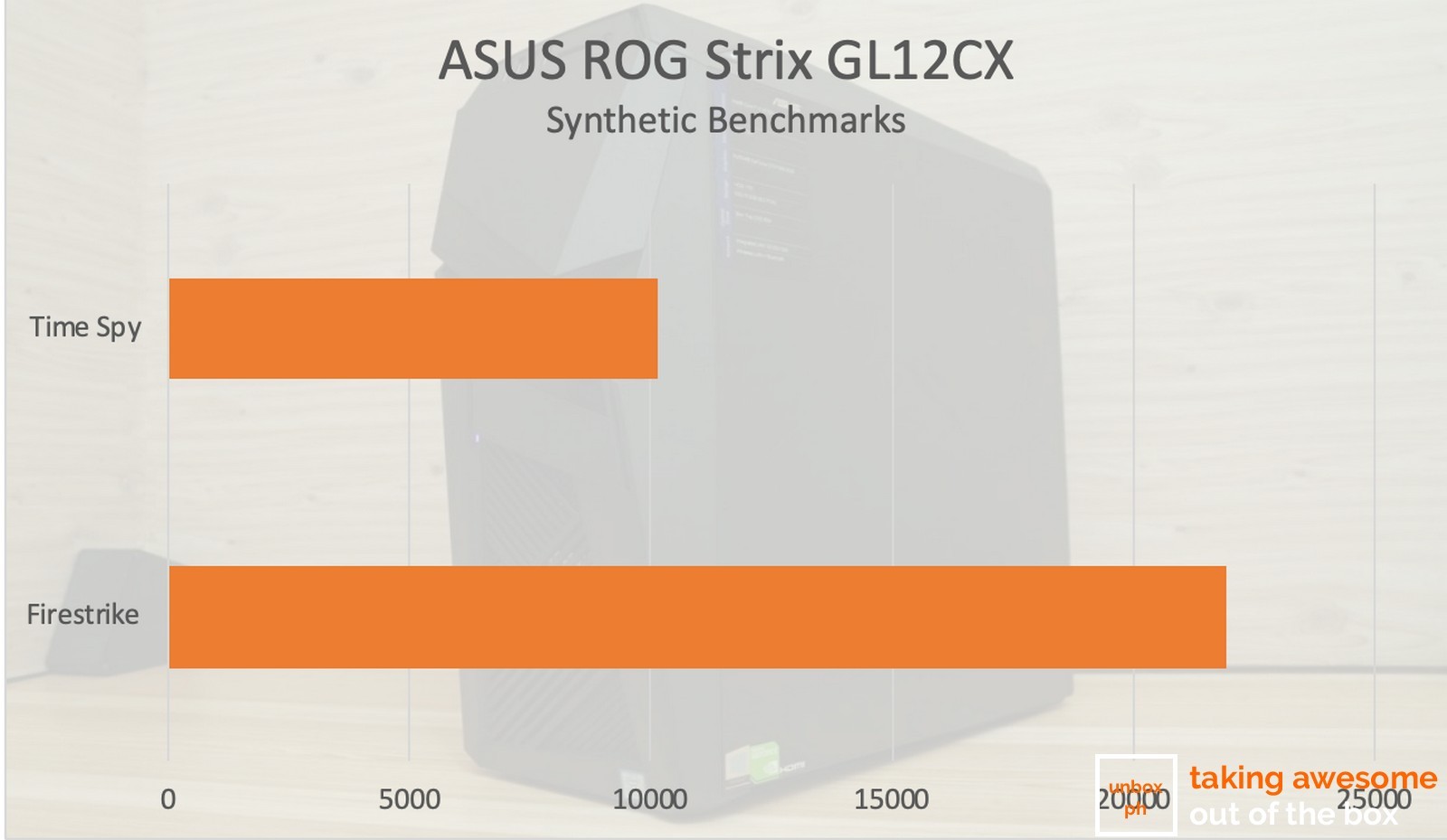 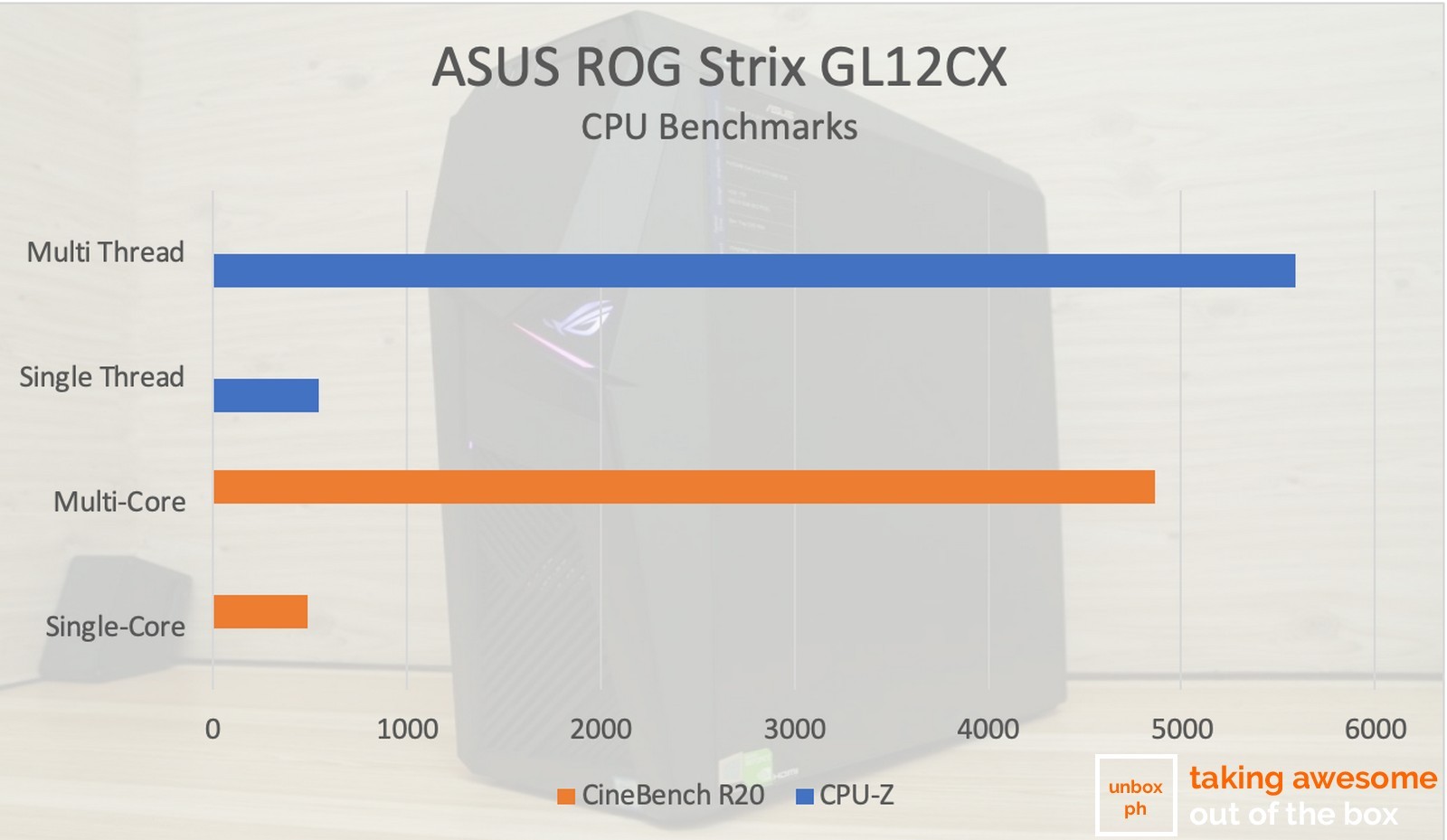 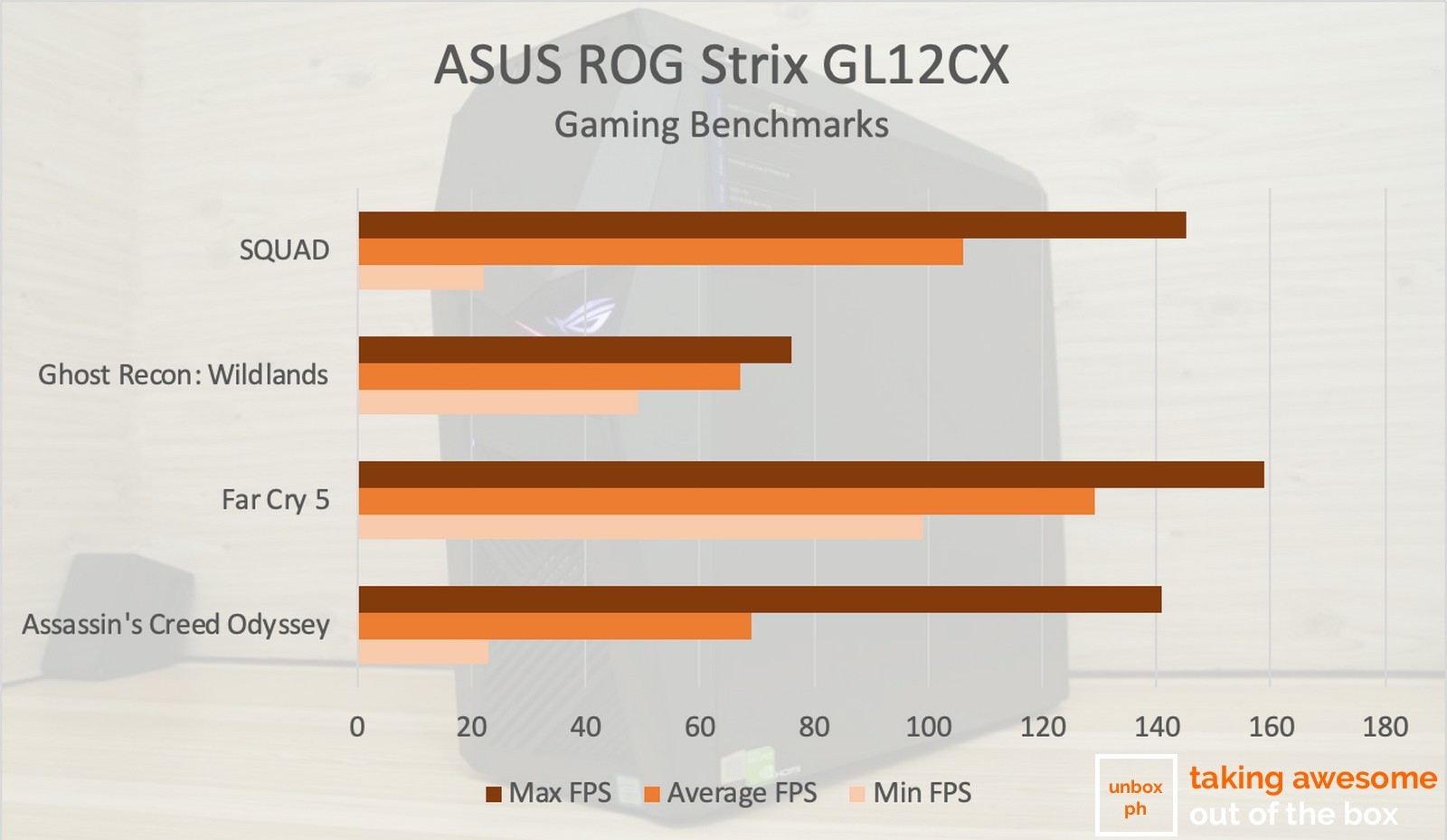 It’s pretty clear that this desktop can handle everything you can throw at it with ease.

Because of how the desktop is set up, you can upgrade the components pretty easily if newer hardware comes out (the desktop served as our test bench for AMD’s Radeon RX 5700). 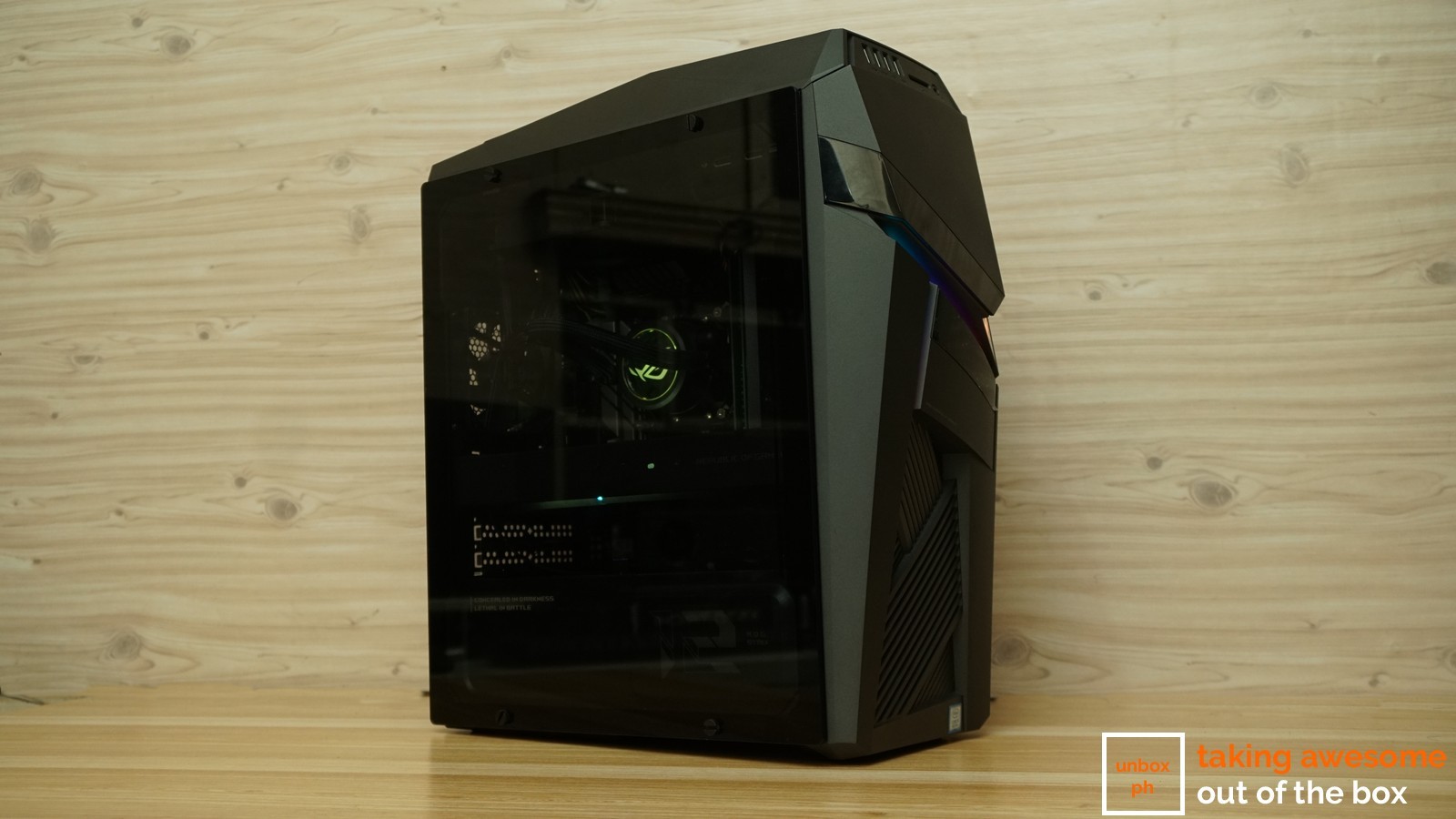 Verdict: buy it if you can’t be arsed to make your own rig

ASUS promised that the ROG GL12CX is the ultimate desktop for eSports gaming, and they’re probably right. It’s probably safe to say that the GL12CX is able to run any game available right now in ultra-resolution above 60 FPS in full HD and even higher in more sedate resolutions.

The problem here is that ASUS is asking top peso for the desktop – as configured, the ROG Strix GL12CX is priced at Php 199,995. Many people will make the argument that you can build a similar system as the GL12 for less money, and you’d be right, though there’s still something to be said about the desktop’s thoughtful design and hardware touches that can’t be replicated by a bespoke system.

If you don’t have enough cash to drop down on this spendy system, you can opt for other iterations of the GL12 that has downgraded specs and components inside of it. Check out the entire list here.