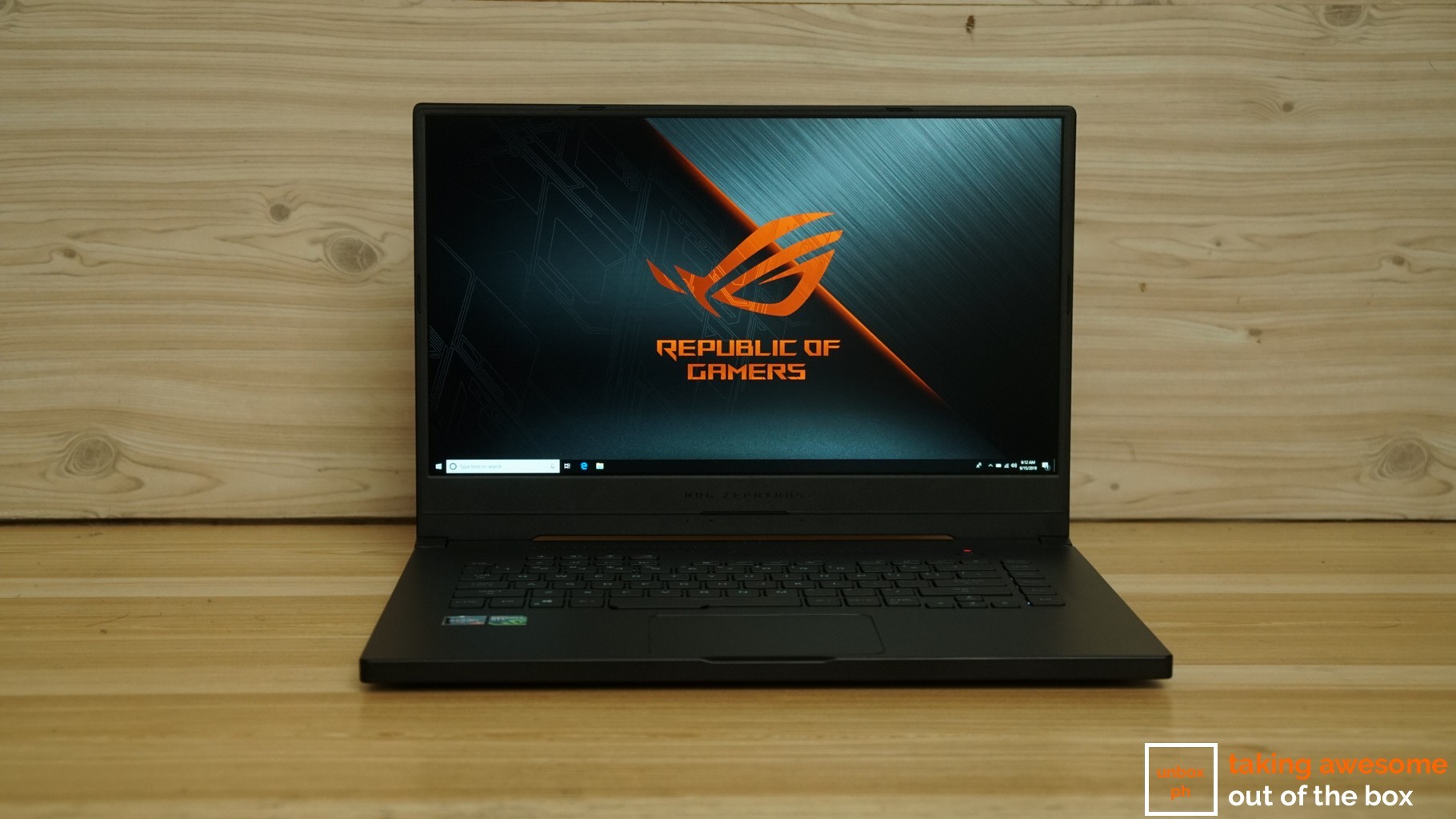 If the high prices of ASUS’ top-tier Zephyrus notebooks aren’t for you, there’s still a way to grab a piece of gaming royalty without having to empty your bank account.

ASUS’ Zephyrus G GA502 is relatively more affordable than its more expensive brothers while packing a sleek design and powerful internals. Interestingly the new notebook runs AMD’s Ryzen 7 processors instead of the more traditional Intel choice – a development that the Blue team needs to take a note of. 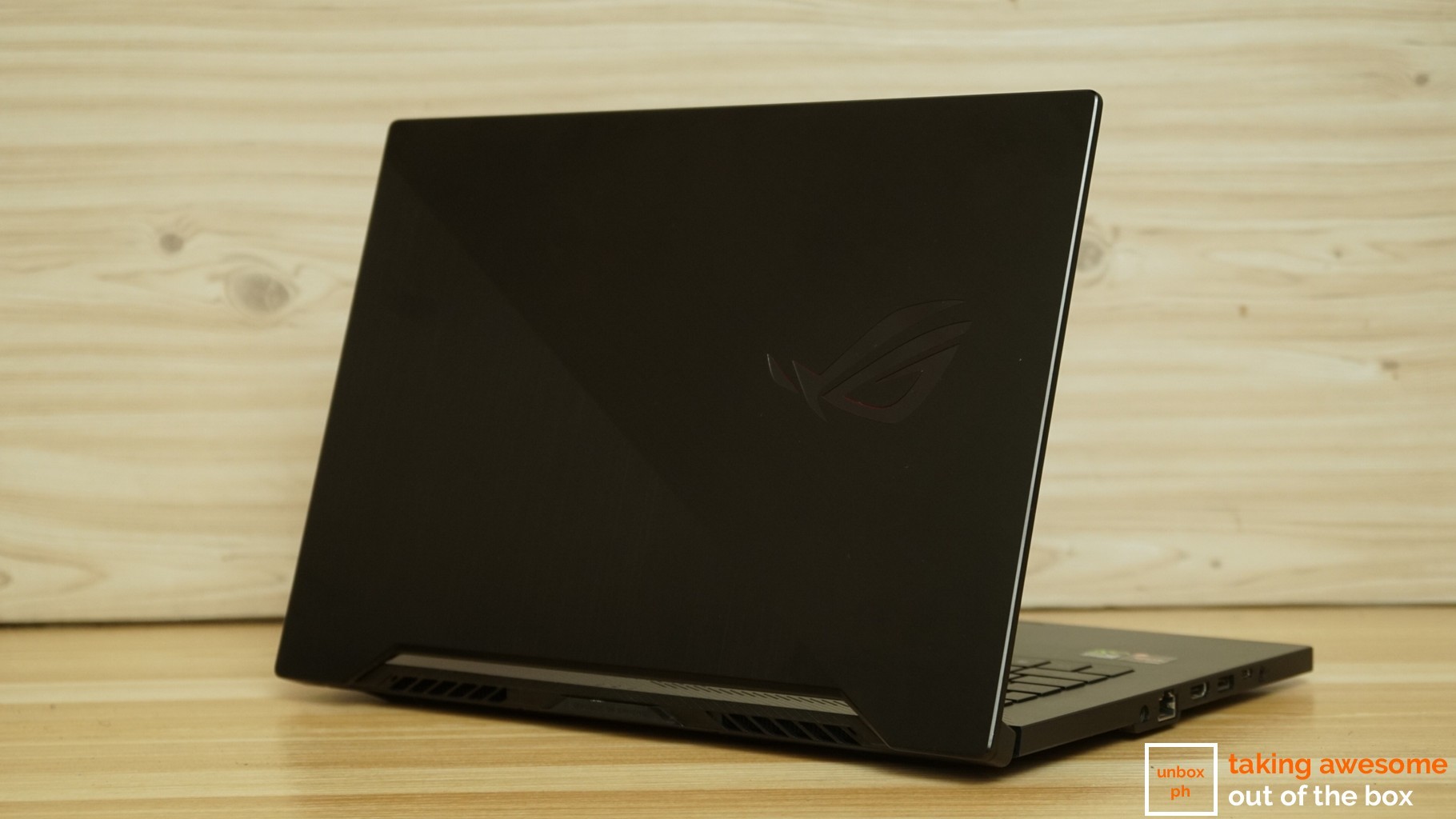 Sleek and light, with a smattering of gamer chic

The brand promise of ASUS’ ROG Zephyrus line is simple: offer slim, compact gaming machines that don’t compromise on performance. That’s what the Zephyrus G GA502 delivers, at least on the outside, as the notebook is still relatively slimmer than most gaming notebooks today.

The lid is made from aluminum and has a brushed finish that’s barely noticeable from afar. There’s a large ROG logo glowing dull red on the outside, lest you forget the notebook’s pedigree. 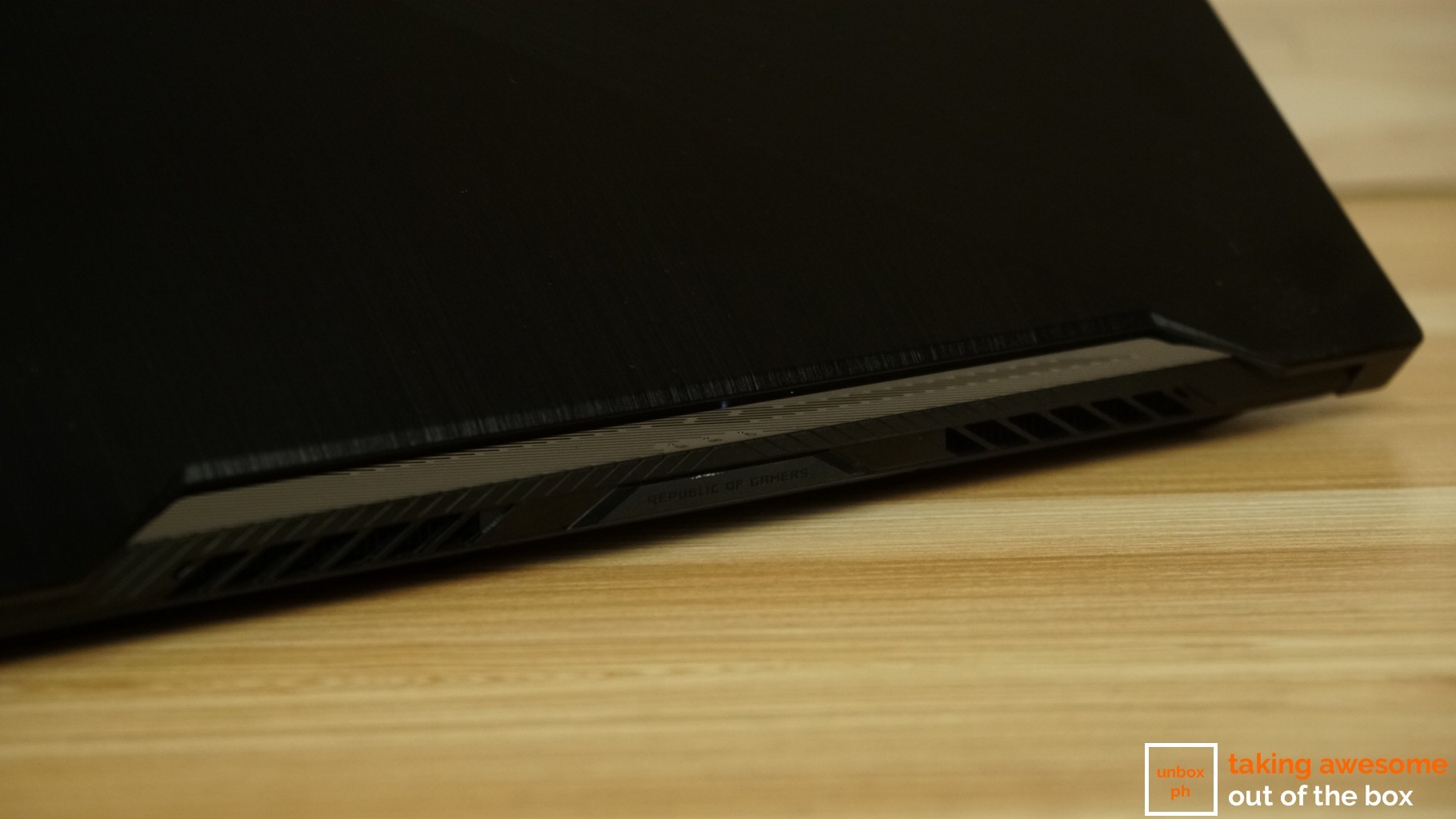 There are exhaust vents at the same places you expect them to be. The whole notebook feels well made, with the lid exhibiting very little flex. ASUS has been making extremely well-built notebooks for a long time now, and the Zephyrus G GA502 isn’t an exception to that legacy. 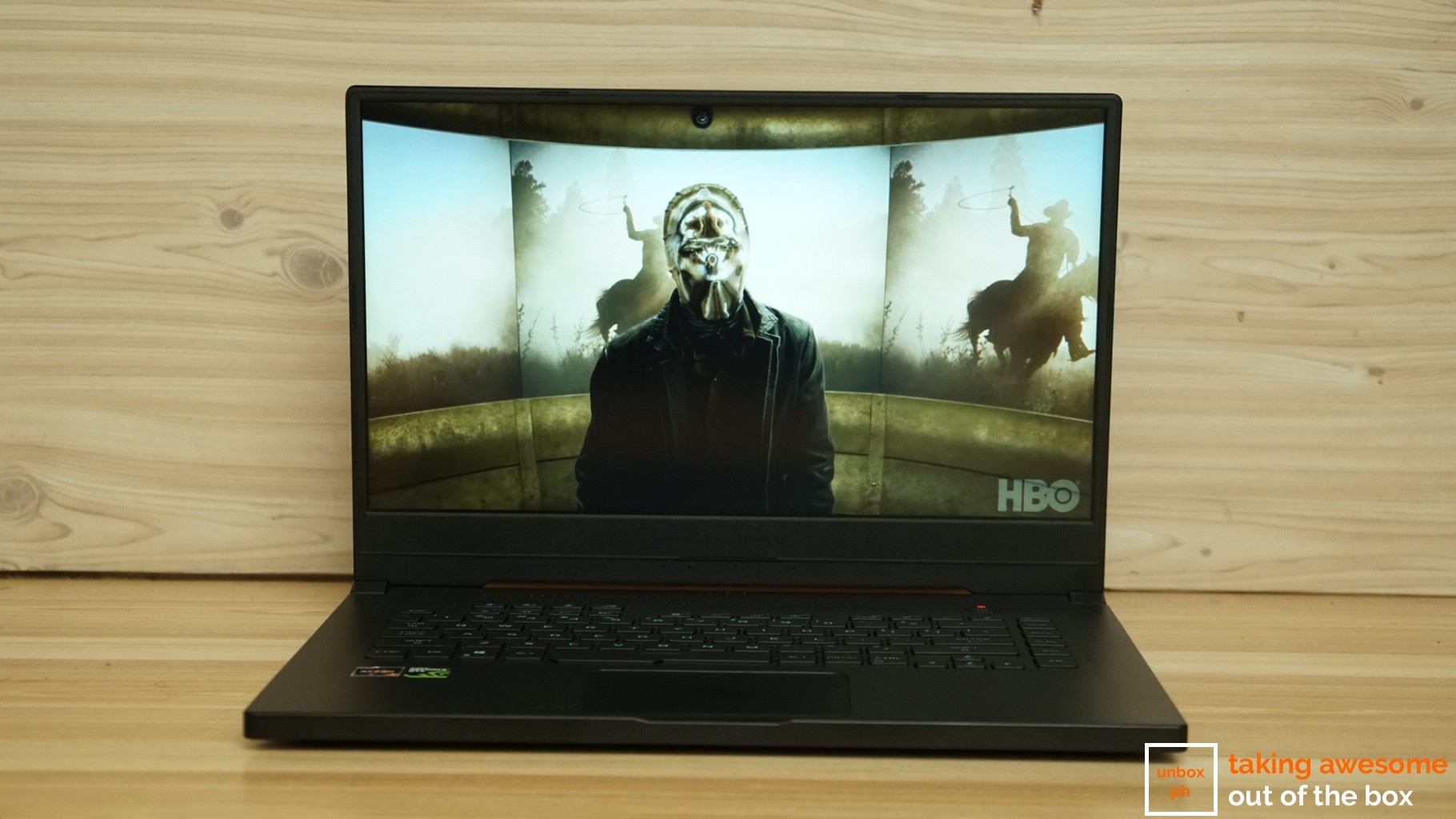 Big screen, no webcam though

The Zephyrus G GA502 has 15.6-inch, full HD vIPS panel that has a 120Hz refresh rate. The bezels on the side and top of the screen are really thin, though you don’t get a webcam which is a bummer.

We did notice that the panel was a little dimmer than we remember ASUS’ other gaming notebooks being which is a problem, especially when you’re out and about using the notebook as, well a regular notebook and not a gaming machine.

The display is a little problematic when it comes to color accuracy as well – if you’re a content creator and want a color-accurate notebook, this might not be the one for you. 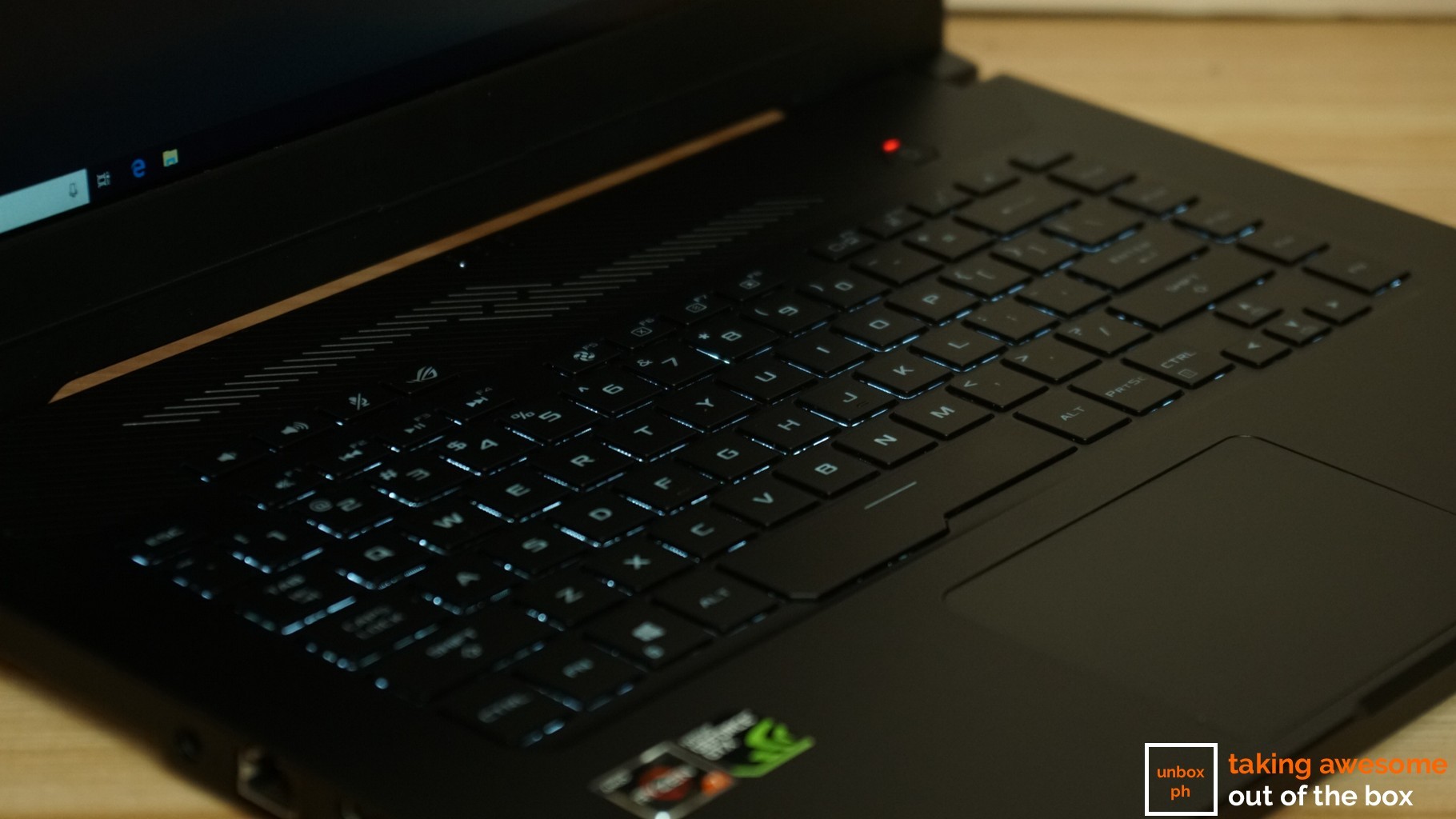 No RGB for the keyboard

The Zephyrus G GA502 has a typical keyboard arrangement unlike its more expensive brothers, which means its more comfortable to type and game on during long sessions.

The keys have a bit shorter travel than I would have preferred though, at just 0.8mm, though I felt like the actuation force (the force you needed to exert to depress the keys) were a little heavier than what I was used to, which is OK.

Curiously though the keys only had white backlighting, and doesn’t use the company’s Aura Sync RGB tech – which is a little odd, considering the price of the notebook.

As far as ports and connectors go the Zephyrus G GA502 has plenty, including an RJ45 Ethernet port, HDMI 2.0, three USB 3.1 ports, one USB Type-C port along with a headphone jack.

I’m a little disappointed that ASUS didn’t include an SD card reader in the mix, which would have been helpful. 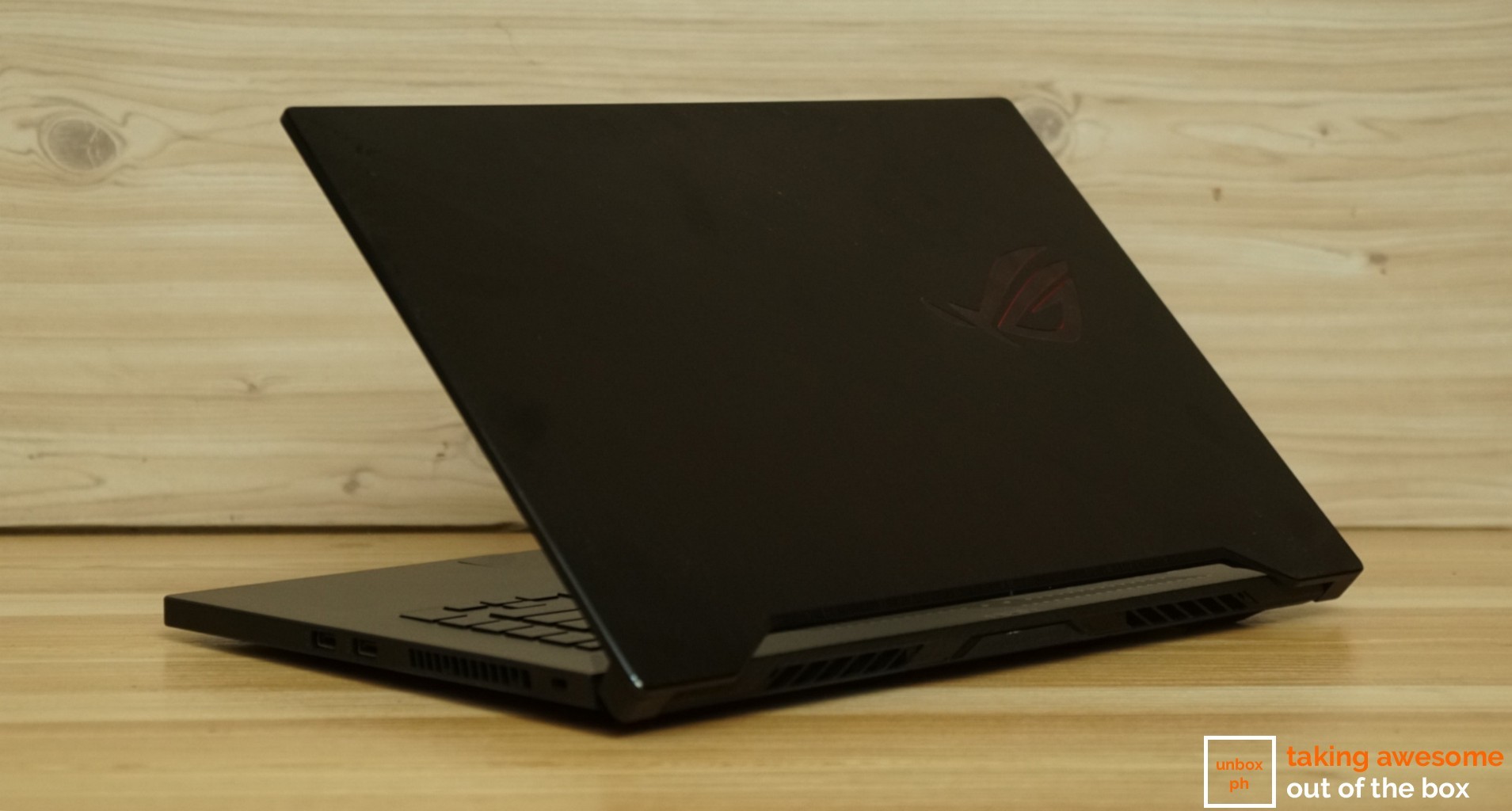 NVIDIA’s GTX 1660Ti is fast becoming the favorite GPU for mid-tier applications, while AMD’s newer mobile processors have already proved to be just as capable as its Blue team counterpart.

Let’s take a look at the benchmarks: 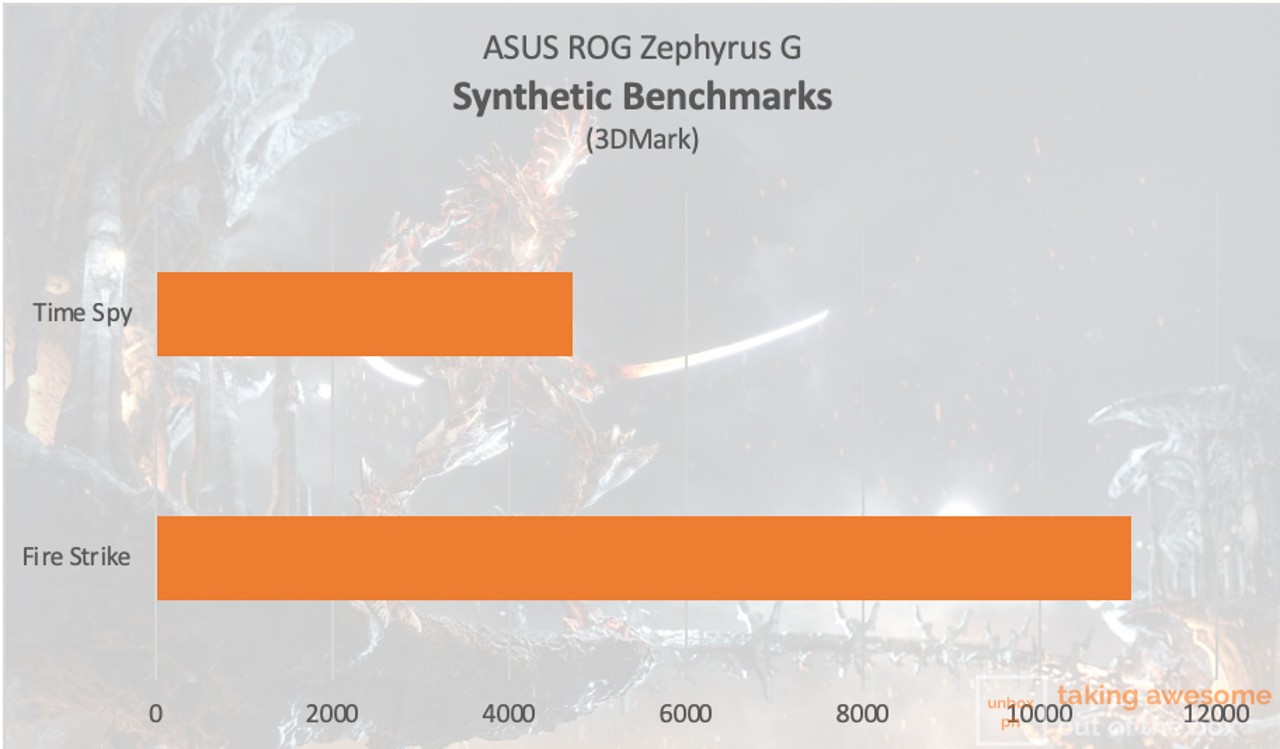 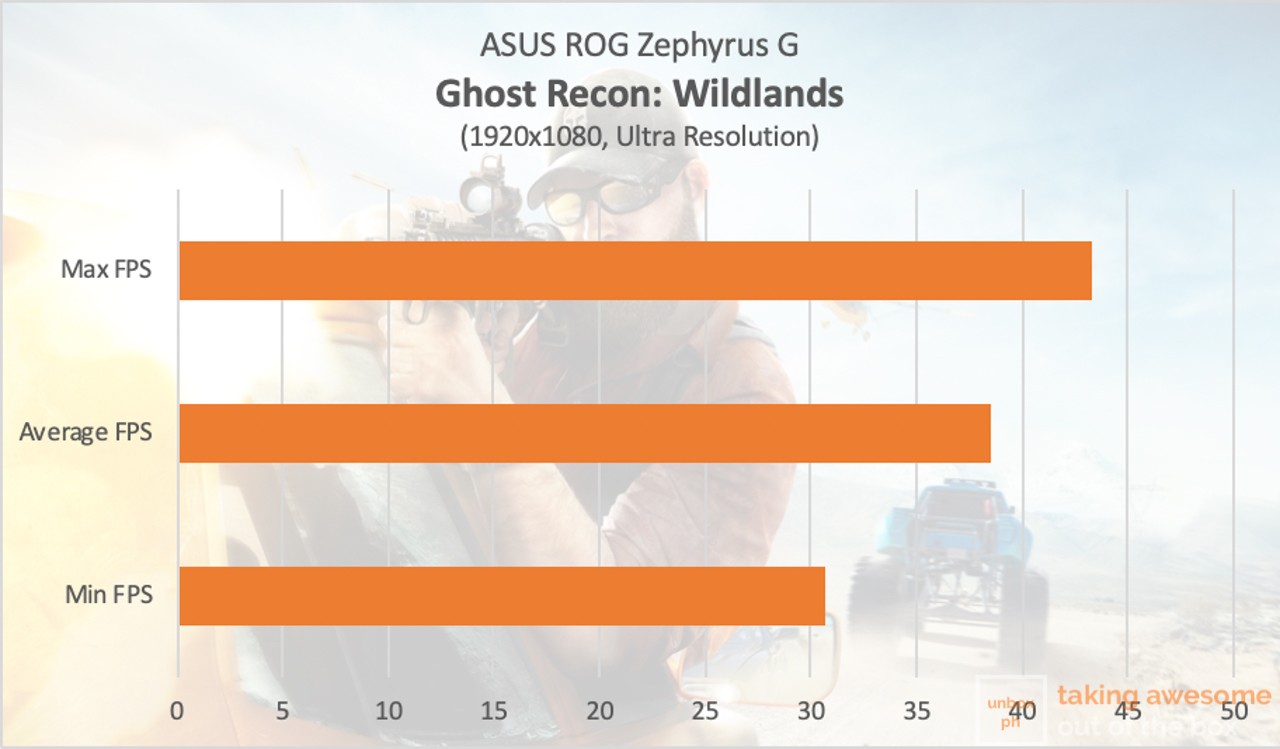 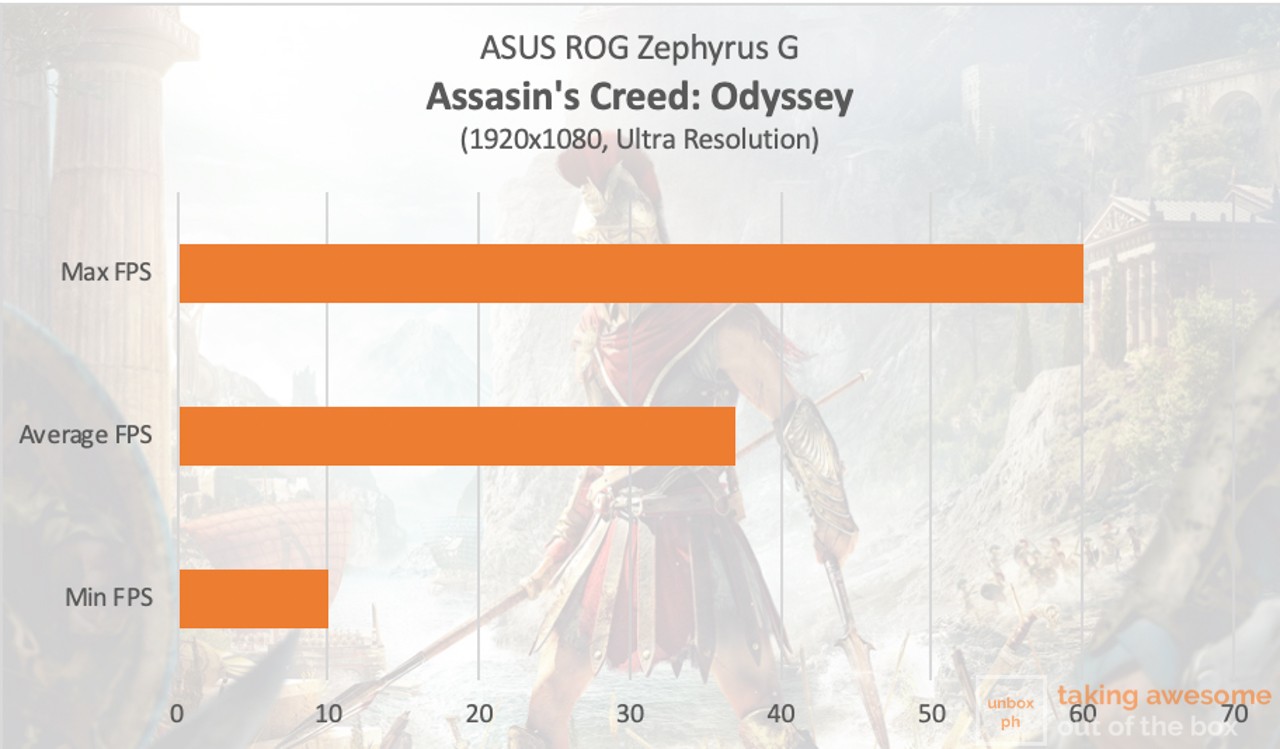 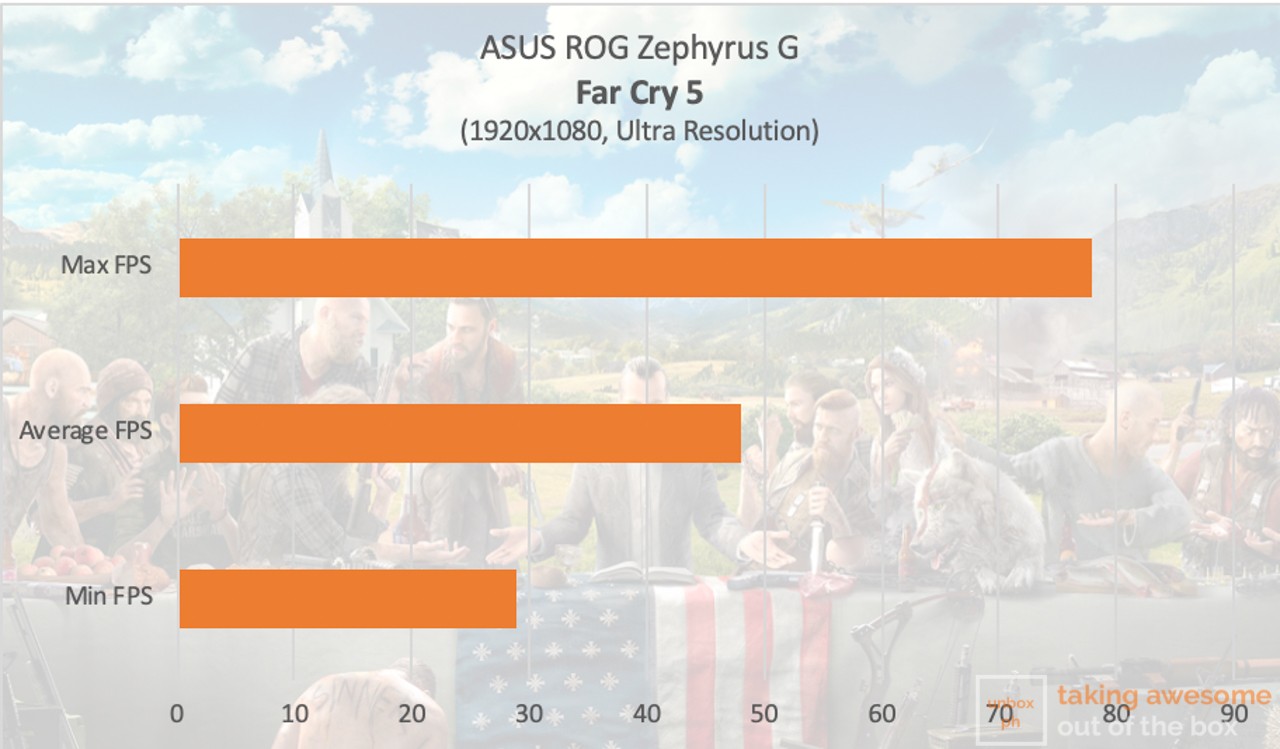 The notebook scores fairly respectable numbers on our three regular benchmark games, though the lower than usual numbers on ultra might mean you’d be better served by reducing graphical settings one step down, to high or very high.

One thing we did notice was that the fan got obnoxiously loud when we were in the midst of benchmarking. 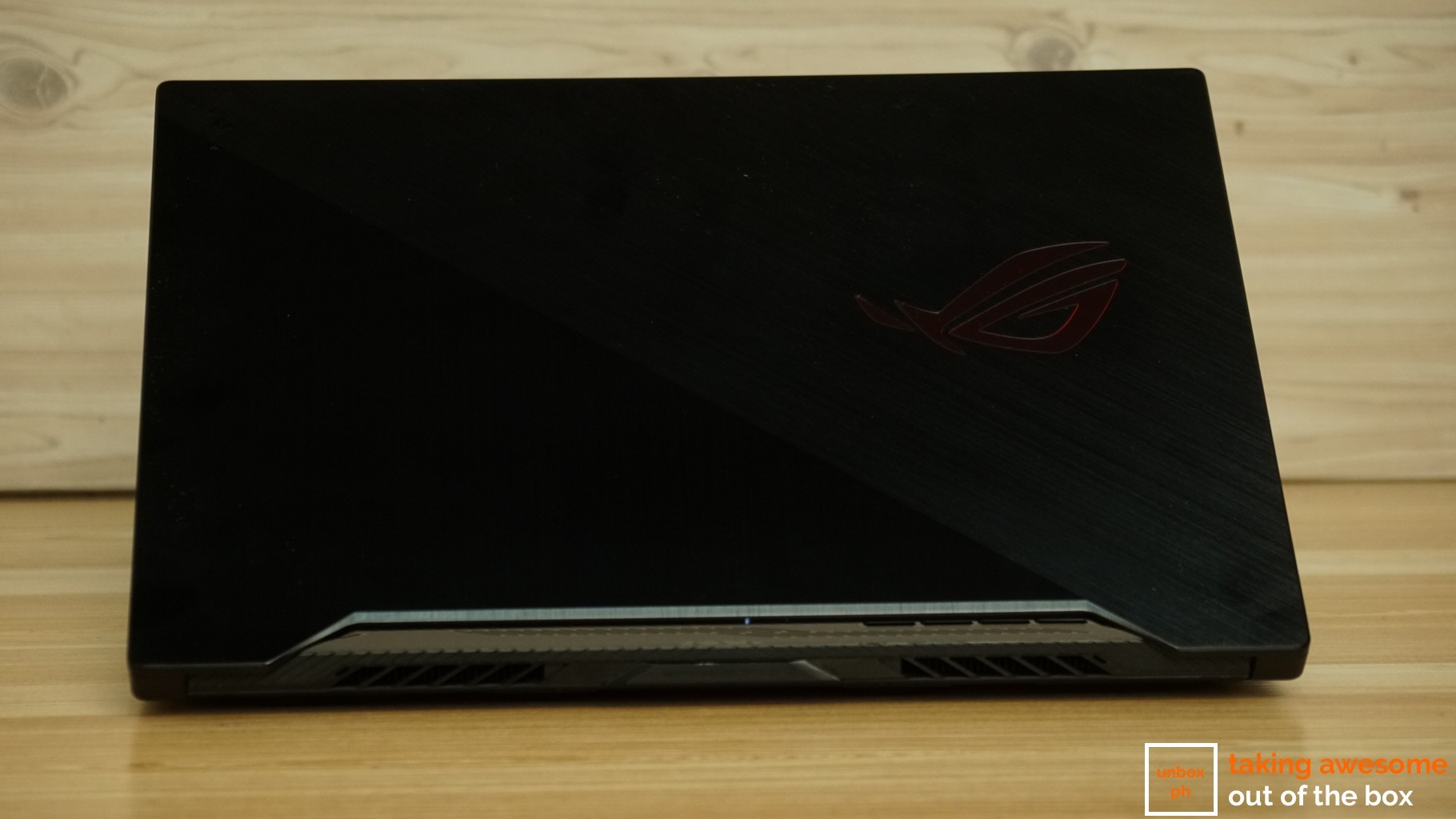 The battery lasts a long time

One thing we did like is the fact that the battery on this thing lasts quite a bit. Gaming notebooks and battery endurance usually don’t go hand-in-hand, but that’s not the case with the Zephyrus G GA502.

On a standard video loop test with 50% brightness on, we found that the notebook ran for around 7 hours and 45 minutes before it shut down, which is quite impressive for a gaming notebook. 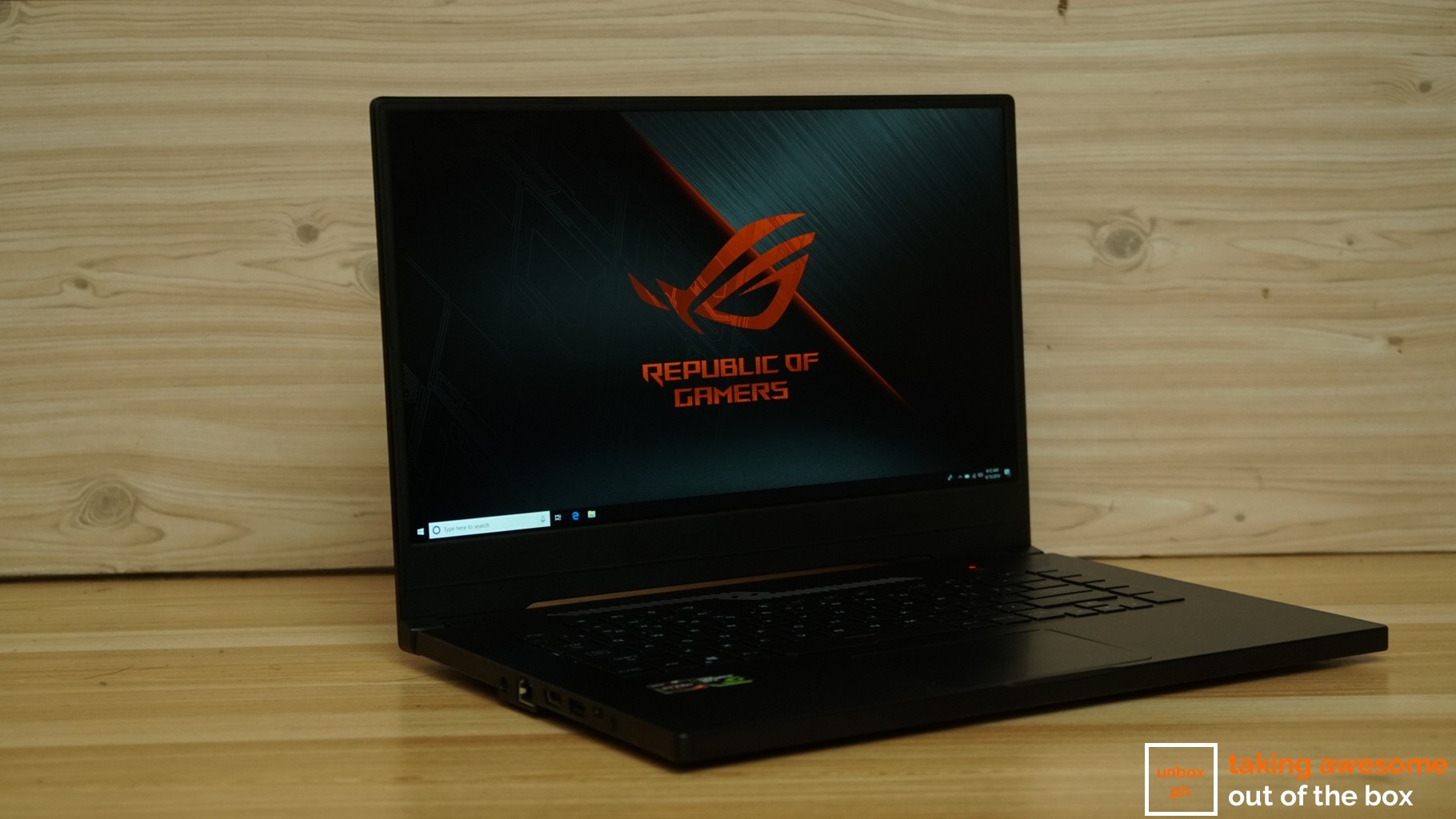 Verdict: A great option if you’re looking for a thin and light gaming notebook

ASUS rarely makes missteps when they produce gaming notebooks, and their Zephyrus G GA502 thankfully isn’t one of them. Its stylish chassis blends well in most corporate settings (that giant ROG logo notwithstanding), and its thin and light chassis is great for people looking for a gaming notebook that literally won’t break their back.

The notebook’s hardware is good enough for 1080p gaming, provided you’re willing to scale back a bit on the detail. The display isn’t the best, though we were very impressed with the notebook’s battery life.

ASUS is pricing the Zephyrus G GA502 at Php 84,995, which is a reasonable price for what you’re getting with the notebook.

Like Loading...
Share
Previous Here are the Rumored Specs for the OnePlus 7T and 7T Pro
Next All iPhone 11 Models Dominate over Most Android Phones in AnTuTu