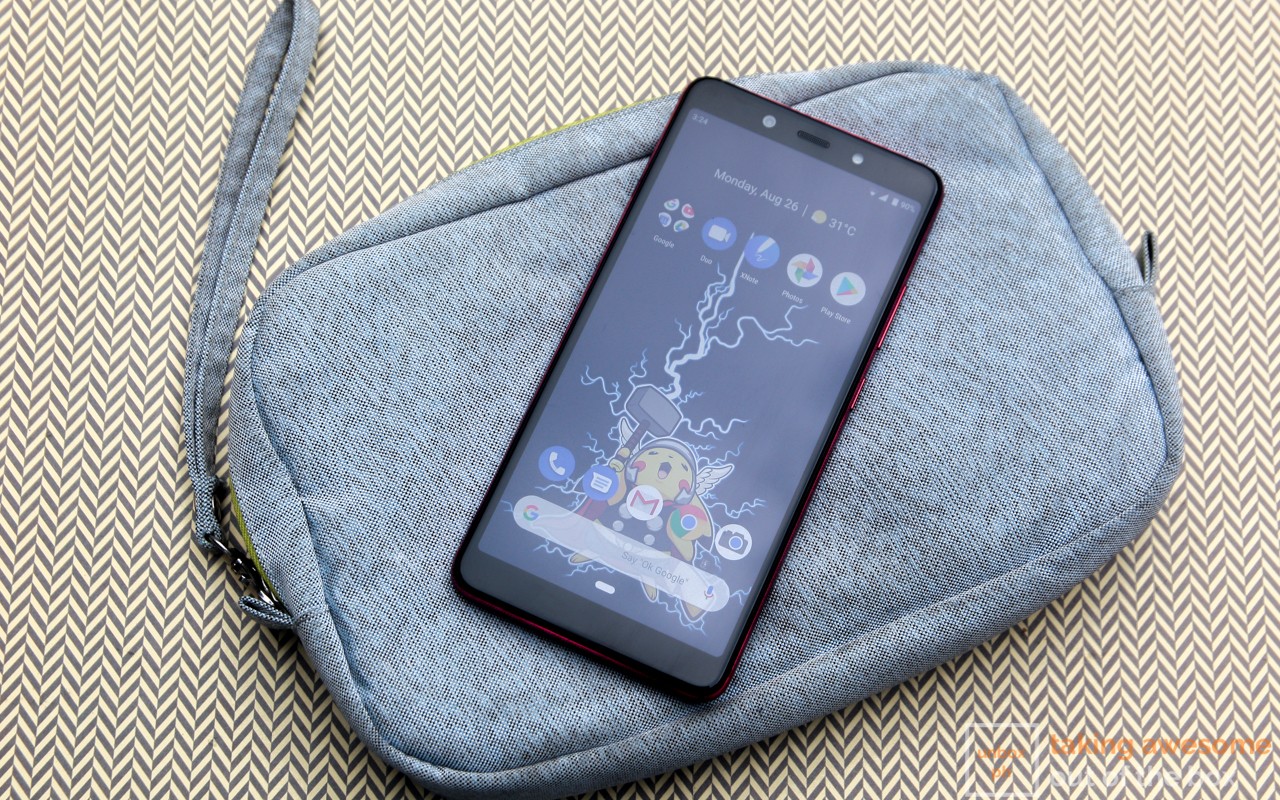 Want a stylus but can’t afford the Note 10?

When it comes to stylus-sporting phones, Samsung’s Galaxy Note series is the first one that always comes into mind. Now on its tenth generation, Samsung continues to tweak the Galaxy Note’s S-Pen with new features and innovative tech. However, not everyone is willing to spend exorbitant amounts of money just to have a stylus.

Fortunately, there are other alternatives. Enter the Infinix Note 5 Stylus. Like its name suggests, the Note 5 Stylus has, well, a stylus that’s integrated into it that functions much like the one on the more expensive Galaxy Note.

Being several thousand pesos more affordable than the Galaxy Note 10 with its Php 8,999 SRP (and Php 5,999 introductory price), is the Note 5 Stylus the best affordable alternative for those who want a phone with a built-in stylus? 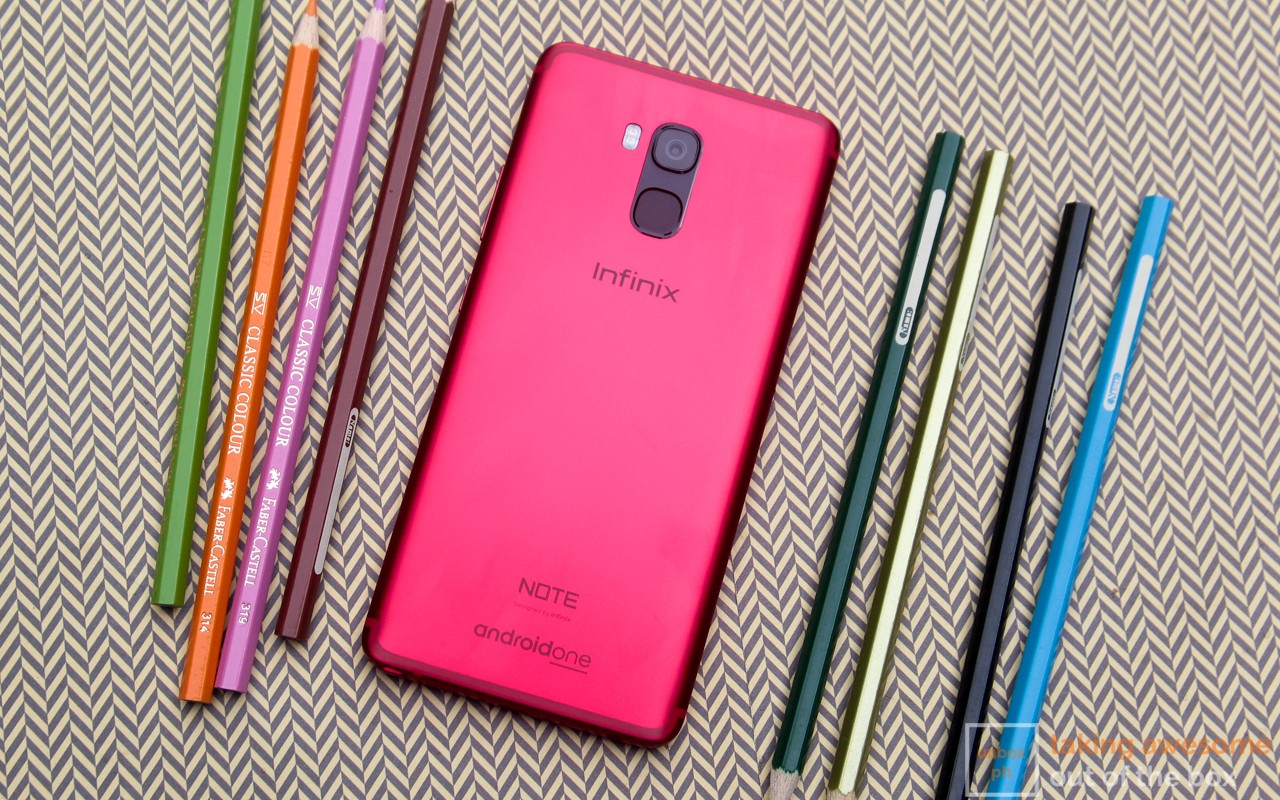 A familiar build we sorely miss

Instead of a glass or glossy polycarbonate build, the Note 5 Stylus sticks to an anodized aluminum unibody. It’s been a while since we’ve seen a phone with a metal exterior and we frankly miss the touch of metal on our hands. Sure it goes against the current design bandwagon of plastic and glass, but metal is far tougher than either of those materials and is more resistant to fingerprint smudges.

While the metal rear looks sturdy enough to survive daily use, Infinix included a TPU case with the Note 5 Stylus just in case.

The phone is a bit on the heavy side, though its curved frame and chamfered edges make it easy to hold and highly suitable for one-handed usage. In addition, the Note 5 Stylus’ brushed finish makes it less slippery on hand.

You have the usual port layout with the Note 5 Stylus: hybrid SIM tray on the left side, power and volume controls on the right side, and headphone jack, loudspeaker, MicroUSB, and X-Pen at the bottom. 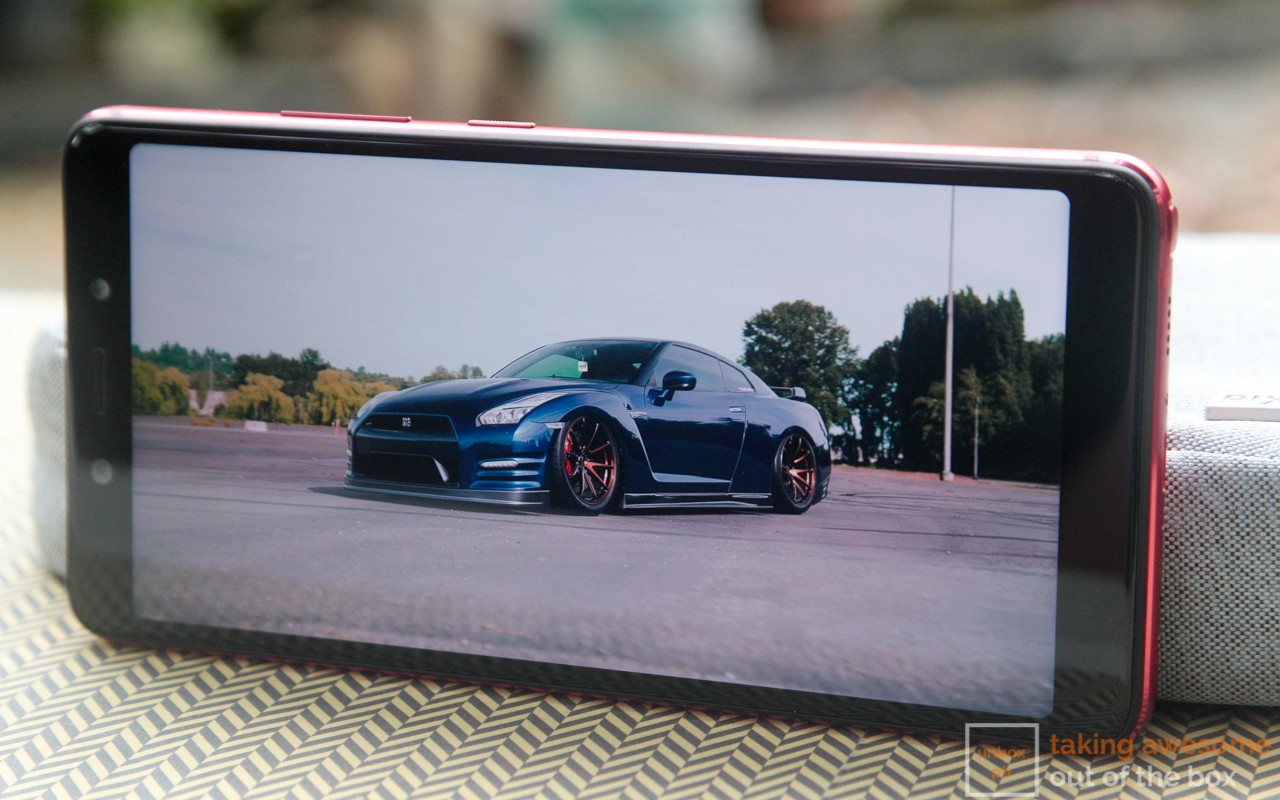 Dated display design, but we’d go for anything notch-free

The Note 5 Stylus goes for a more conservative 18:9 aspect ratio with rather thick top and bottom bezels, but we really don’t mind it at all for two reasons: 1) the design means that we don’t have to deal with any notch or punch-hole, and 2) you get full HD+ resolution, which isn’t bad for its price.

Speaking of the display, the Note 5 Stylus’ IPS panel displays good colors and viewing angles, though you need to adjust the brightness slider once in a while—its adaptive brightness features tends to be inconsistent at times. 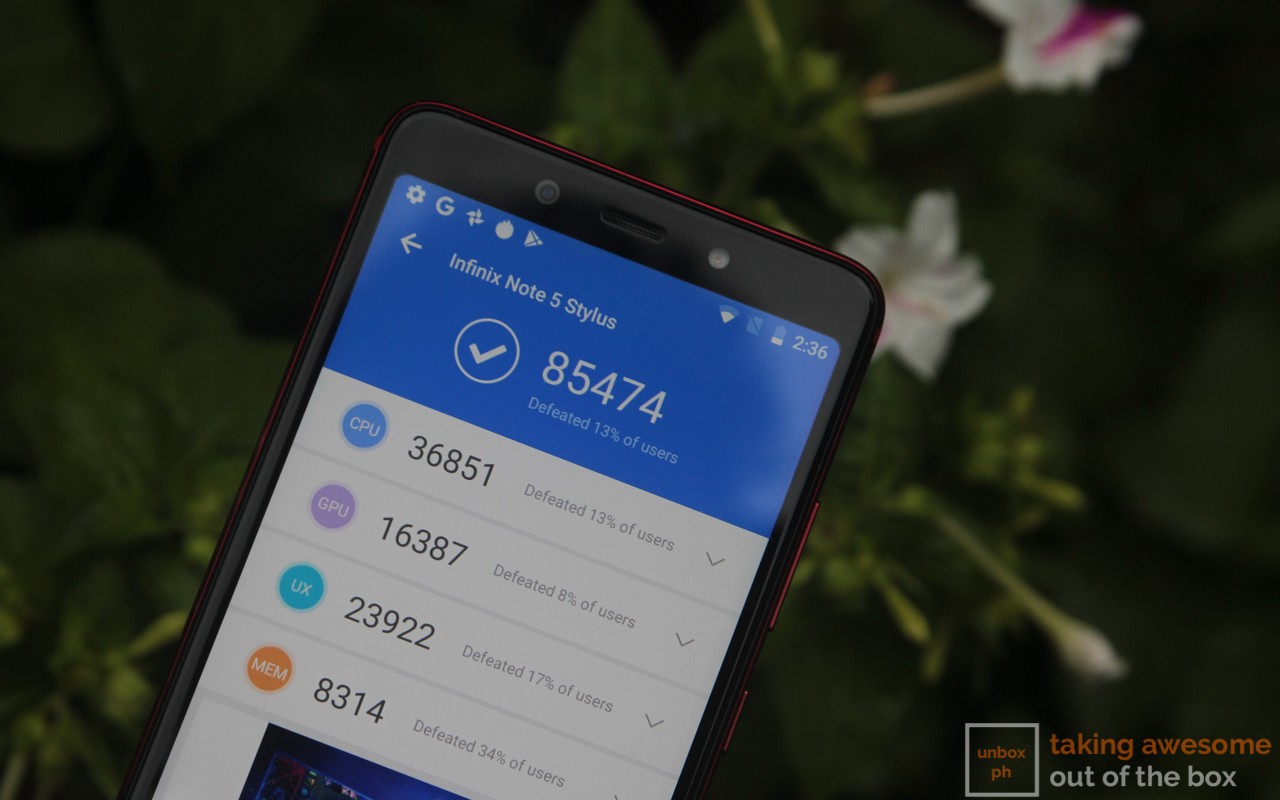 Powering the Note 5 Stylus is an Helio P23 processor paired with 4GB RAM and 64GB internal storage. While the RAM and storage combo is on par with most 2019 budget phones, the Helio P23 processor is showing its age. Roughly two years old as of this writing, the 16nm-based chip is still suitable for day-to-day tasks, but struggles through with games.

We managed to run Need For Speed: No Limits with the Note 5 Stylus (Asphalt 9 Legends kept on crashing during our review), and we experienced frame drops in certain parts of the game despite being able to do an average FPS of 30.

MOBA games like Vainglory fared well with the Note 5 Stylus, though you are limited to 30FPS. Overall, the Note 5 Stylus’ internals can handle a few games, provided that you tone down the graphics settings.

Unlike previous Infinix phones we previously reviewed, the Note 5 Stylus is part of the Android One program. That means you get a clean, near bloat-free interface, along with at least two guaranteed Android updates. Our unit initially came with Android Oreo but got updated to Android Pie during our time with it. 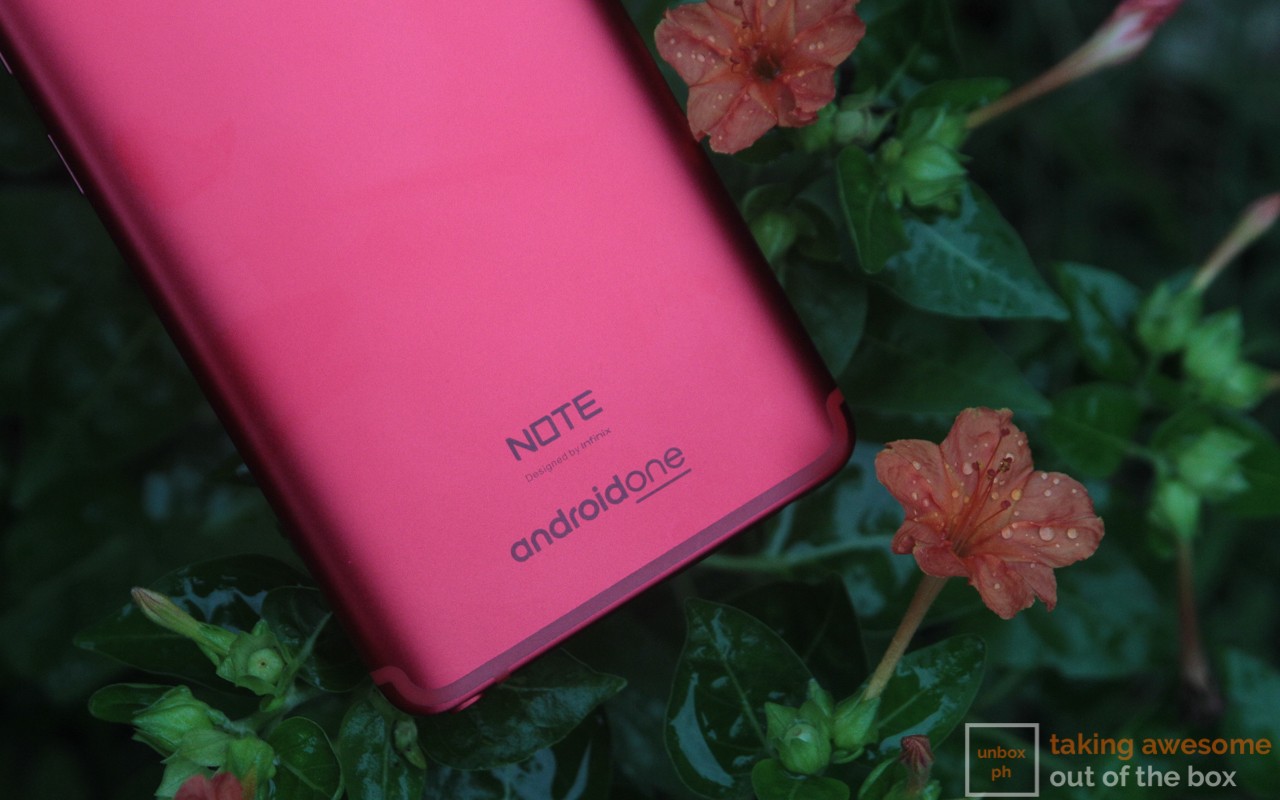 For biometrics, you have a rear-mounted fingerprint scanner on the Note 5 Stylus. Setting it up is a breeze, and unlocking the phone using our fingerprint is fast and accurate. 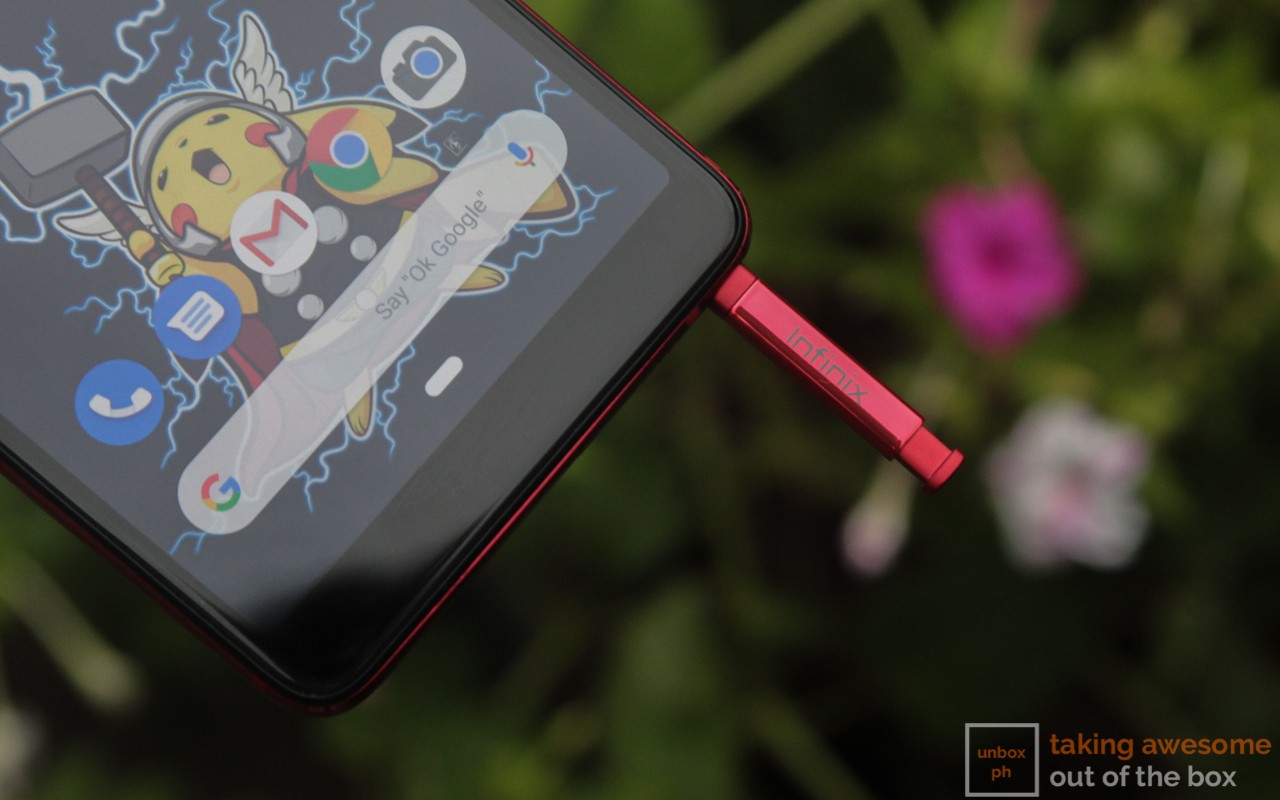 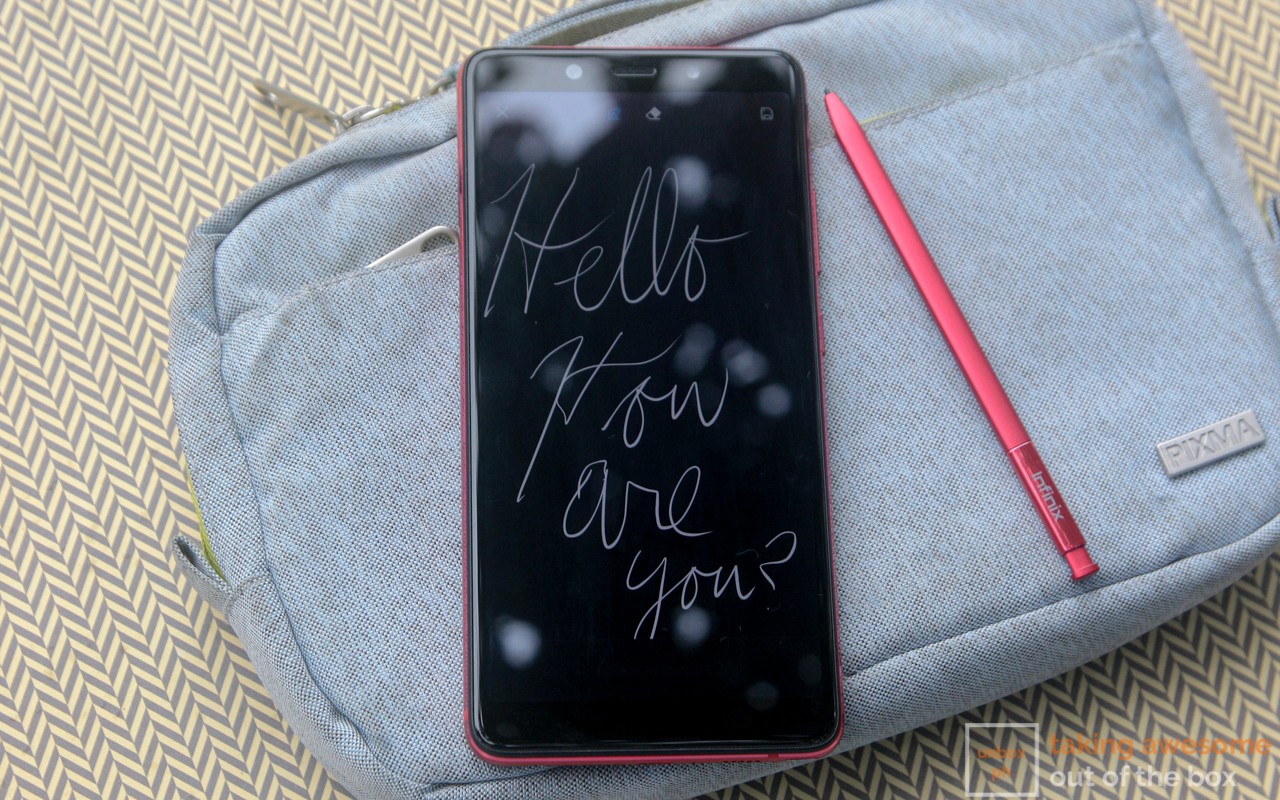 Software-wise, the Note 5 Stylus lets you write a quick note or do a quick doodle when you remove the X-Pen from the phone while it is locked—very useful if you have a sudden lightbulb moment while on the go. As for the pen itself, the X-Pen is more pressure-sensitive compared to its predecessor. 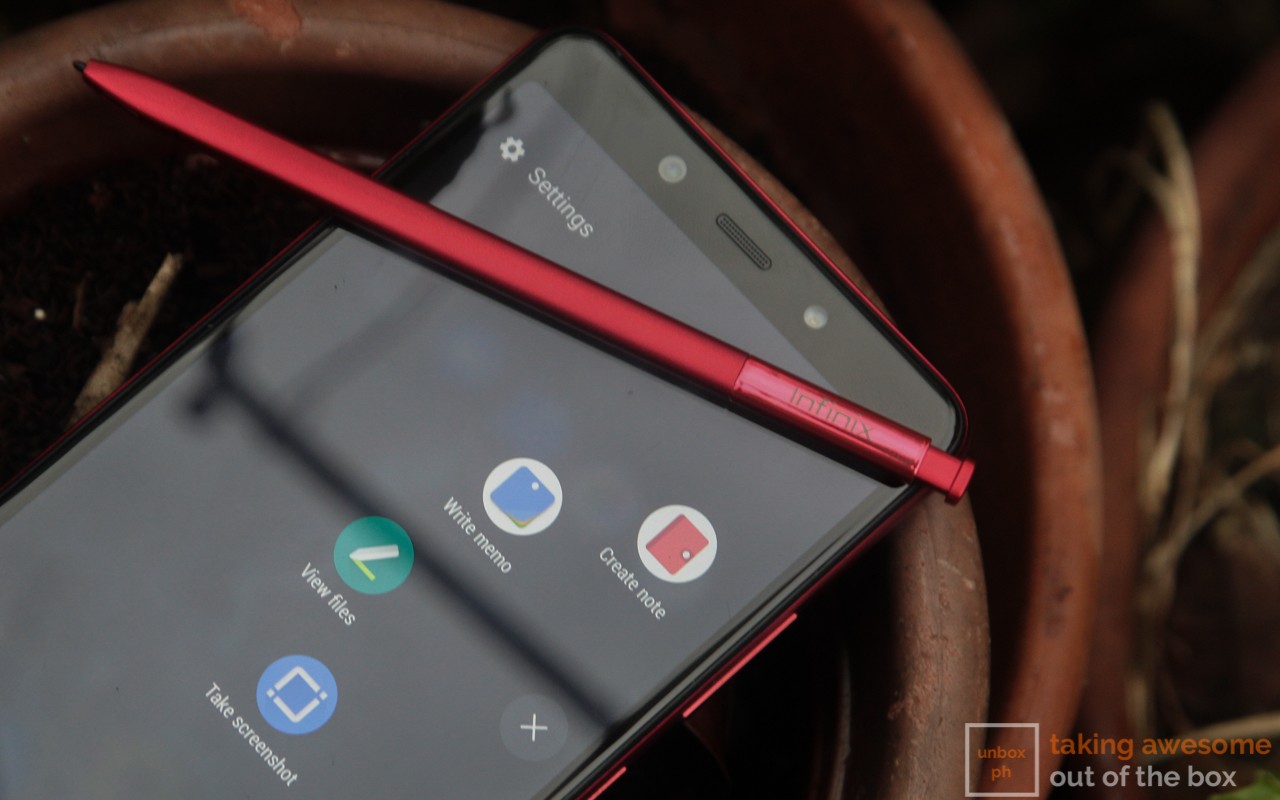 While Infinix has significantly improved its X-Pen, it is far from what Samsung’s S-Pen has to offer: it does not come with Bluetooth LE, and you can’t use it to predict what you write when composing a message. It should not be a big deal for most people looking for a stylus-sporting phone given the Note 5 Stylus’ price. 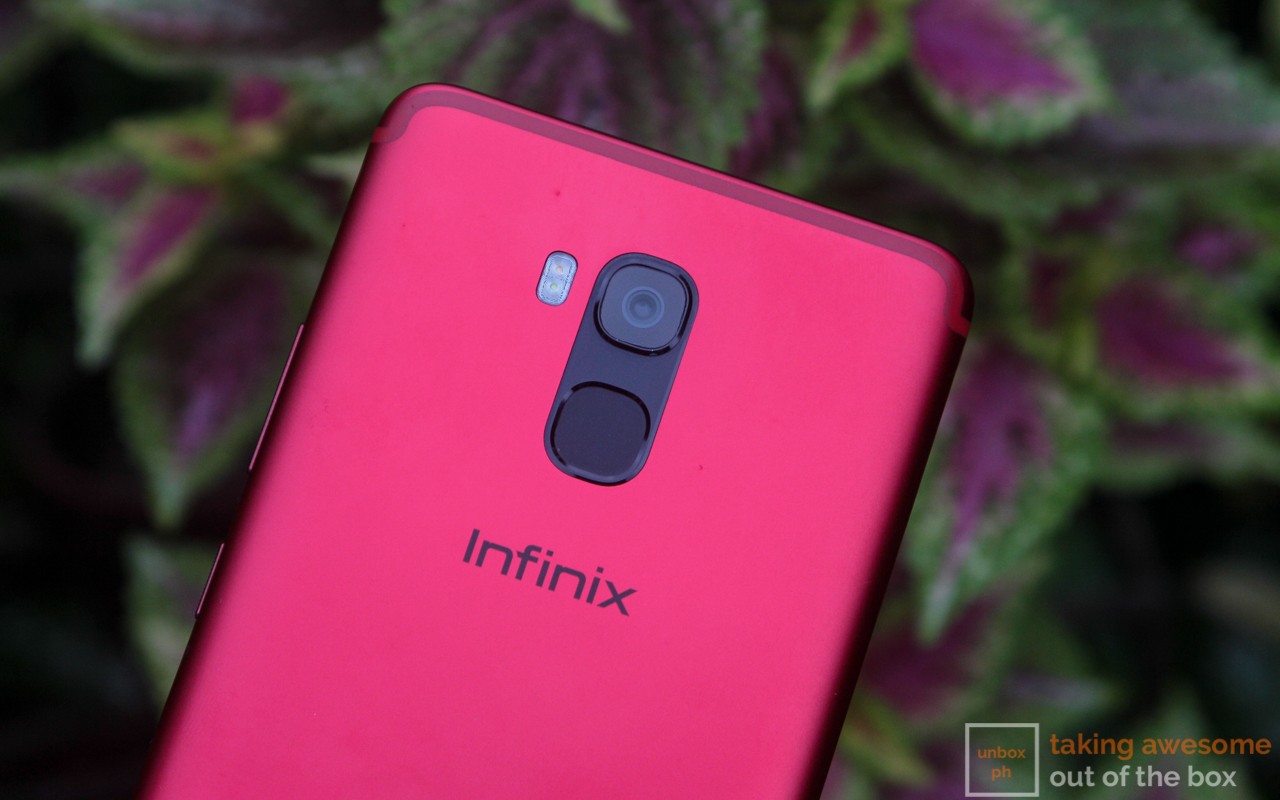 In an era of high-megapixel sensors and multiple rear camera setups, it is easy to overlook the Note 5 Stylus’ lone 16-megapixel rear camera. However, it is not always the quantity: during our time with the phone, the Note 5 Stylus snapped decent images, even in low light conditions. Autofocusing is a bit on the slow side, but once you nail it, you get sharp images with good color renditions and decent dynamic range.

The Note 5 Stylus’ 16-megapixel front camera produced good selfies, and the addition of an LED flash is useful for taking selfies in dim lighting.

That’s not the case with video recording, however: unlike its photography performance, the Note 5 Stylus performed poorly with video recording, as the footage was smudgy even in daylight conditions. In addition, the lack of stabilization meant that you need to have a steady pair of hands or a gimbal if you really want to use the Note 5 Stylus for video. 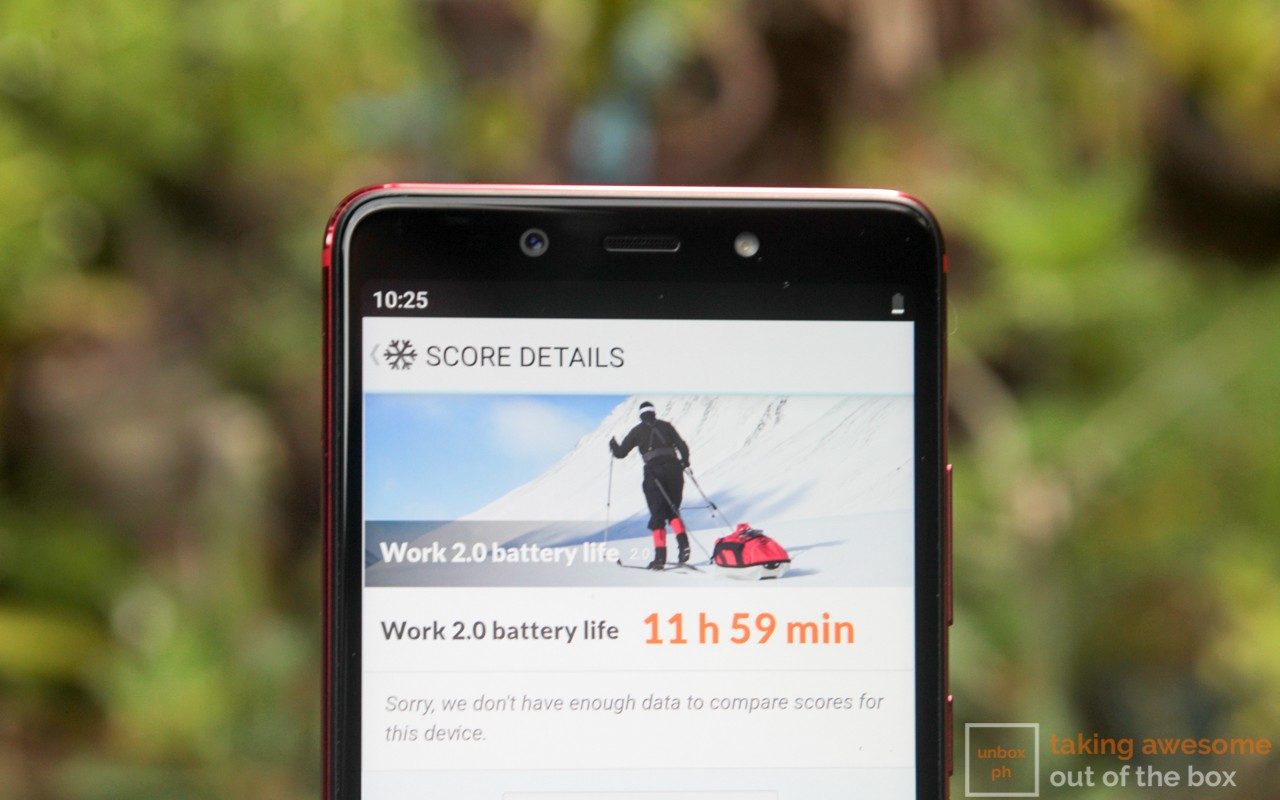 Generous battery can last you more than a day

4000mAh batteries are the norm for 2019 smartphones, and the Note 5 Stylus comes with one. While it is powered by an old processor, we clocked in almost 12 hours in PCMark’s battery test. On real-life use, we managed to use the Note 5 Stylus for a whole day with moderate use, leaving us with approximately 40% of juice left towards the evening.

Charging the Note 5 Stylus is a breeze, as its XCharge 18w fast charging feature fully tops up the battery from zero to 100 in around two hours via its MicroUSB port. 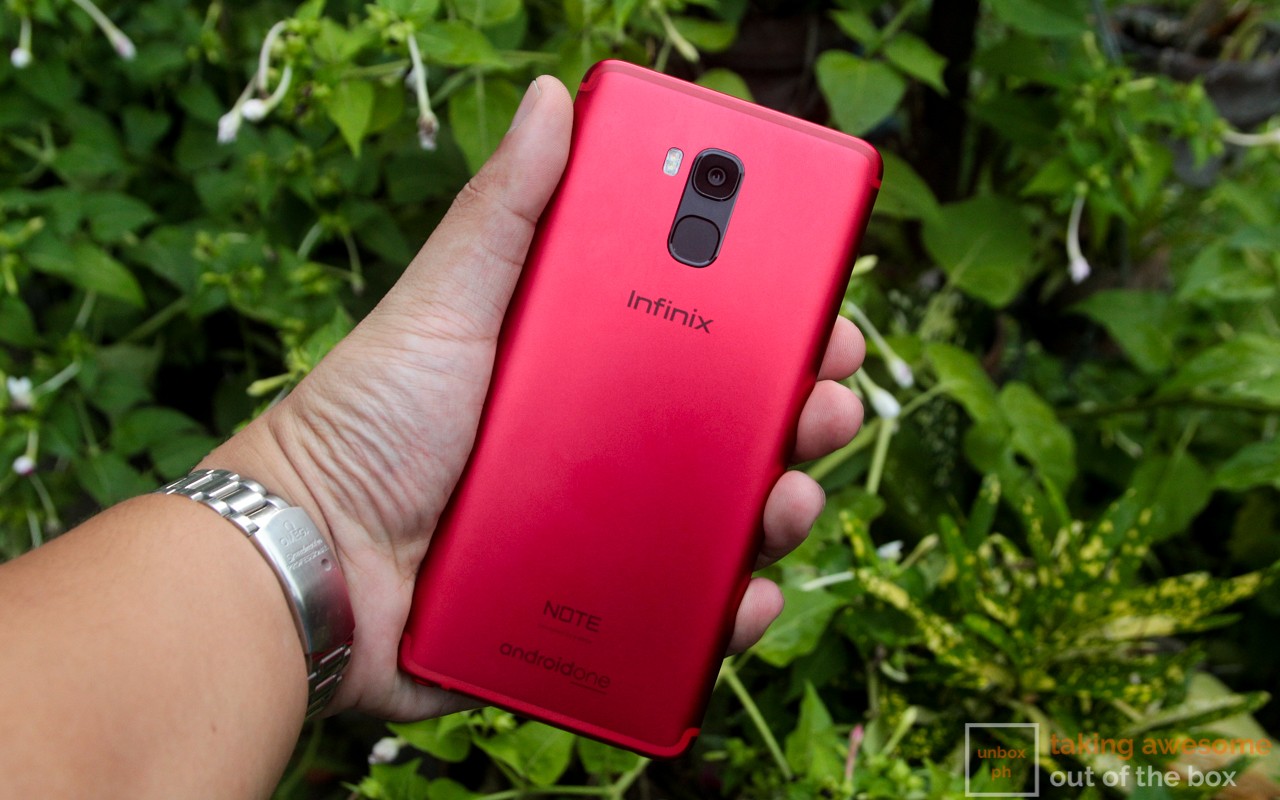 Verdict: Buy this IF you really need the stylus feature

At its introductory price of Php 5,999, the Note 5 Stylus is a definite steal for an Android One phone that sports a highly functional stylus. Even though it has a dated design and a rather old processor, features like a 4000mAh battery and Full HD+ display still make it a good offering—assuming you were able to snag it during its promo period.

If you want something more powerful and feature-packed, you might want to get the newer Note 6, which has an Helio P35 processor, AMOLED display, and a more versatile triple rear camera setup. However, there’s no word yet if Infinix will be bringing this model to our shores. 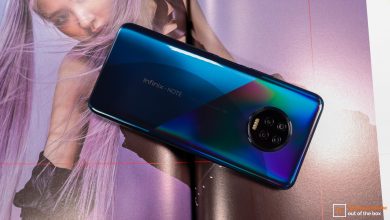 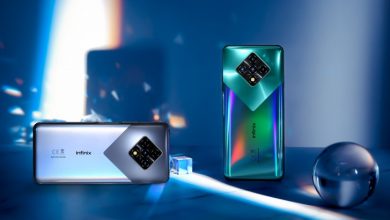 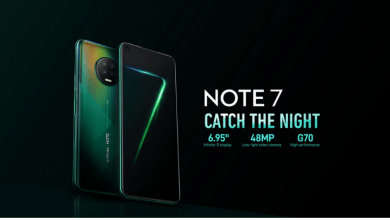 Infinix Brings the Note 7 to the Philippines 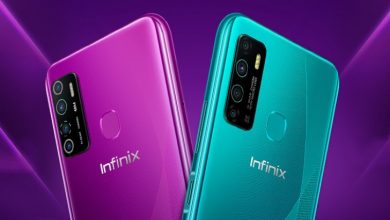