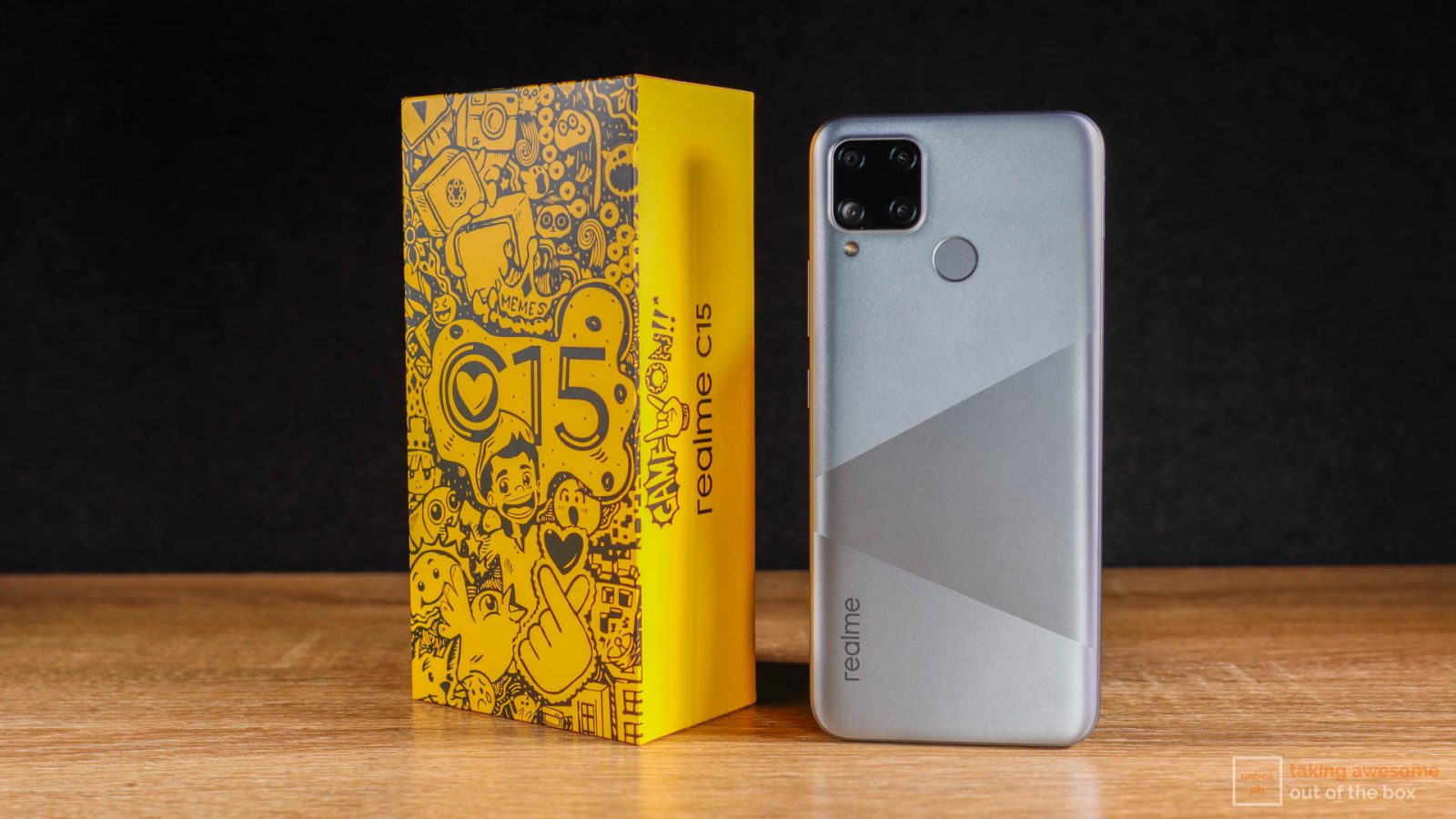 Realme is growing like crazy in many Asian markets, fueled by its multiple product launches this year. Hot on the heels of its C11 launched last month, the brand is launching its new Realme C15 battery monster, which is the focus of this review.

As a big brother to the C11, the C15 gets a bigger 6000mAh battery, quad rear cameras, and a physical fingerprint scanner. But are these upgrades sufficient enough for people to choose the C15 over the C11? 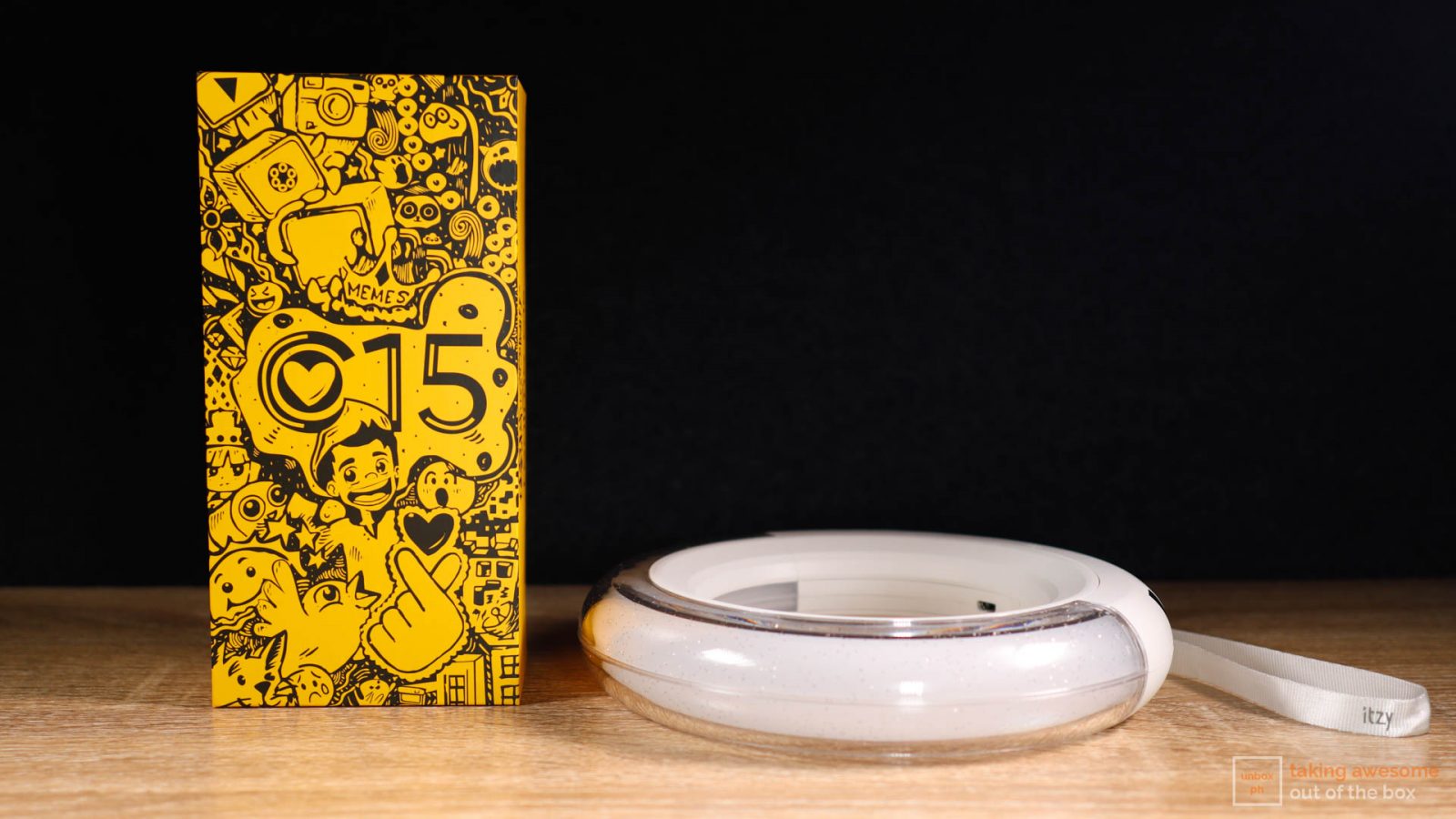 For the Philippine market, Realme will be releasing around 1000 C15 units sporting this special box with doodle art from Realme Community member Vince Ricohermoso. The artwork showcases how the youth is perceived right now, with the sides of the box revealing key qualities of the C15.

Inside the box, you have the usual items: the phone itself, SIM ejector tool, documentation, MicroUSB cable, 18w wall charger, and a thank you card from the Realme Philippines Community. 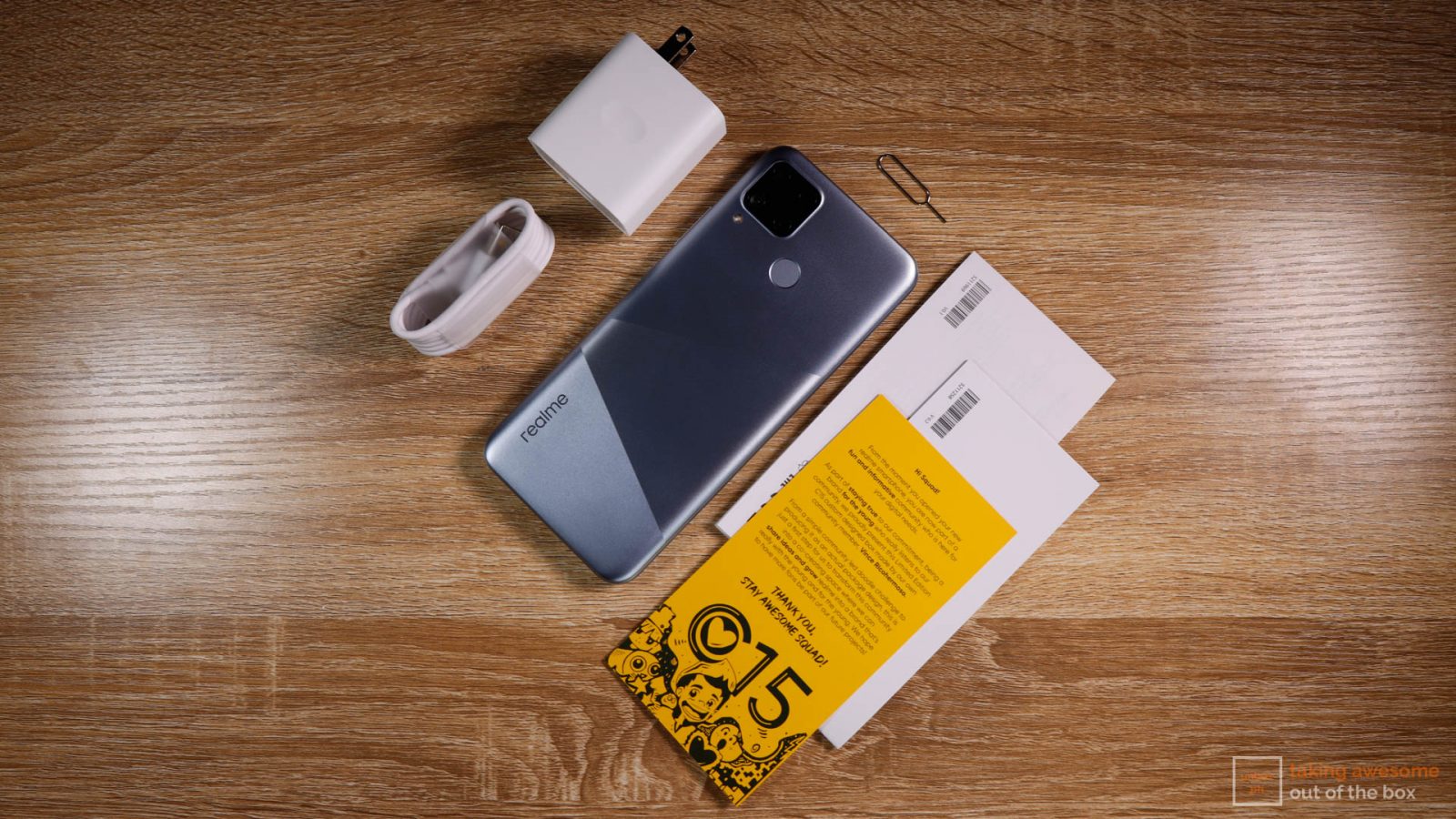 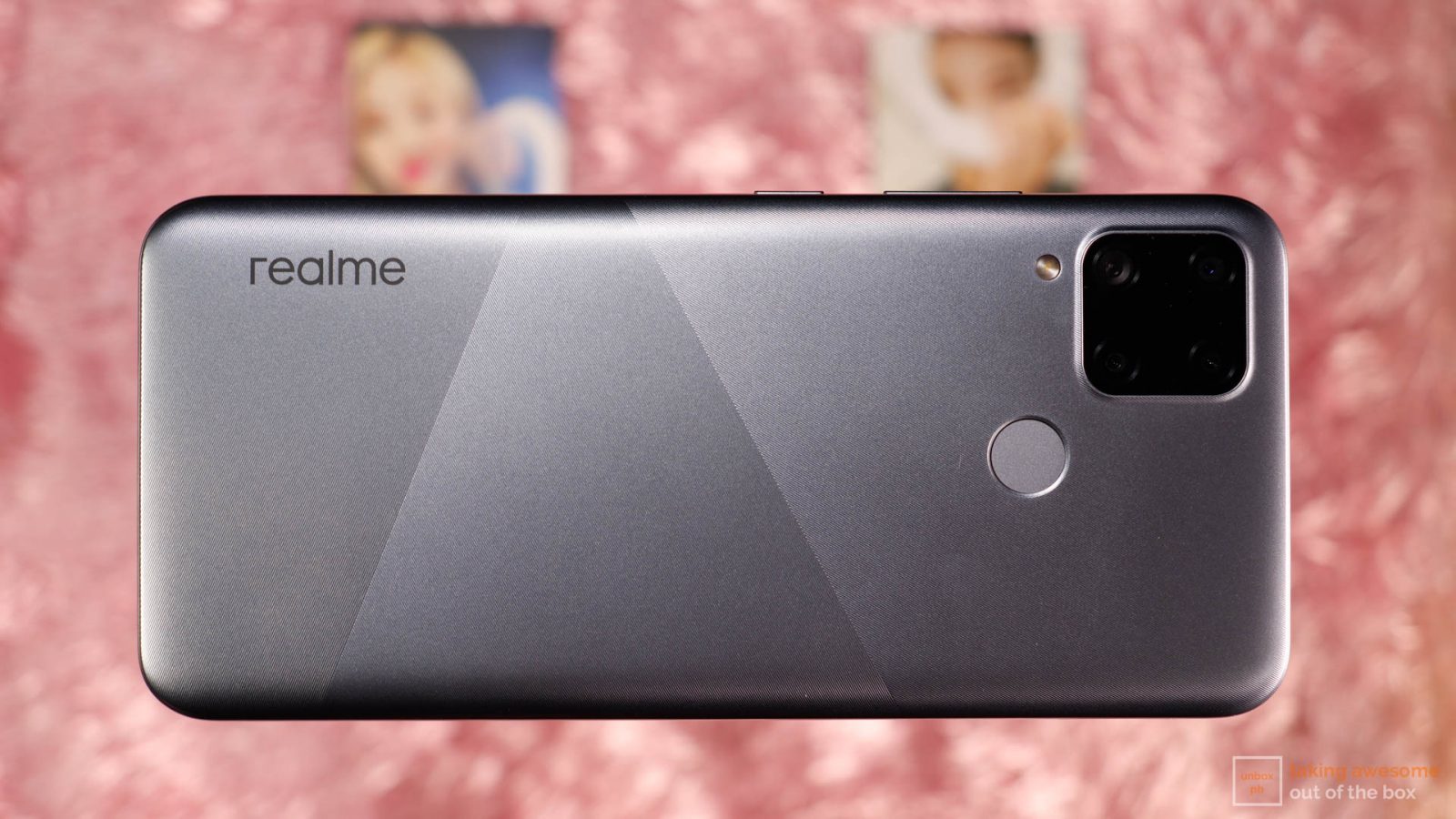 One big and hefty boi

One thing you would immediately notice when you hold the C15 is that it is thicc and heavy. That is partly because it packs a 6000mAh battery, which is the biggest we have seen in a budget smartphone released in recent memory. We don’t mind the extra weight, as having a bigger battery translates to better endurance for day-to-day use, but like anything design-related, your mileage may vary. 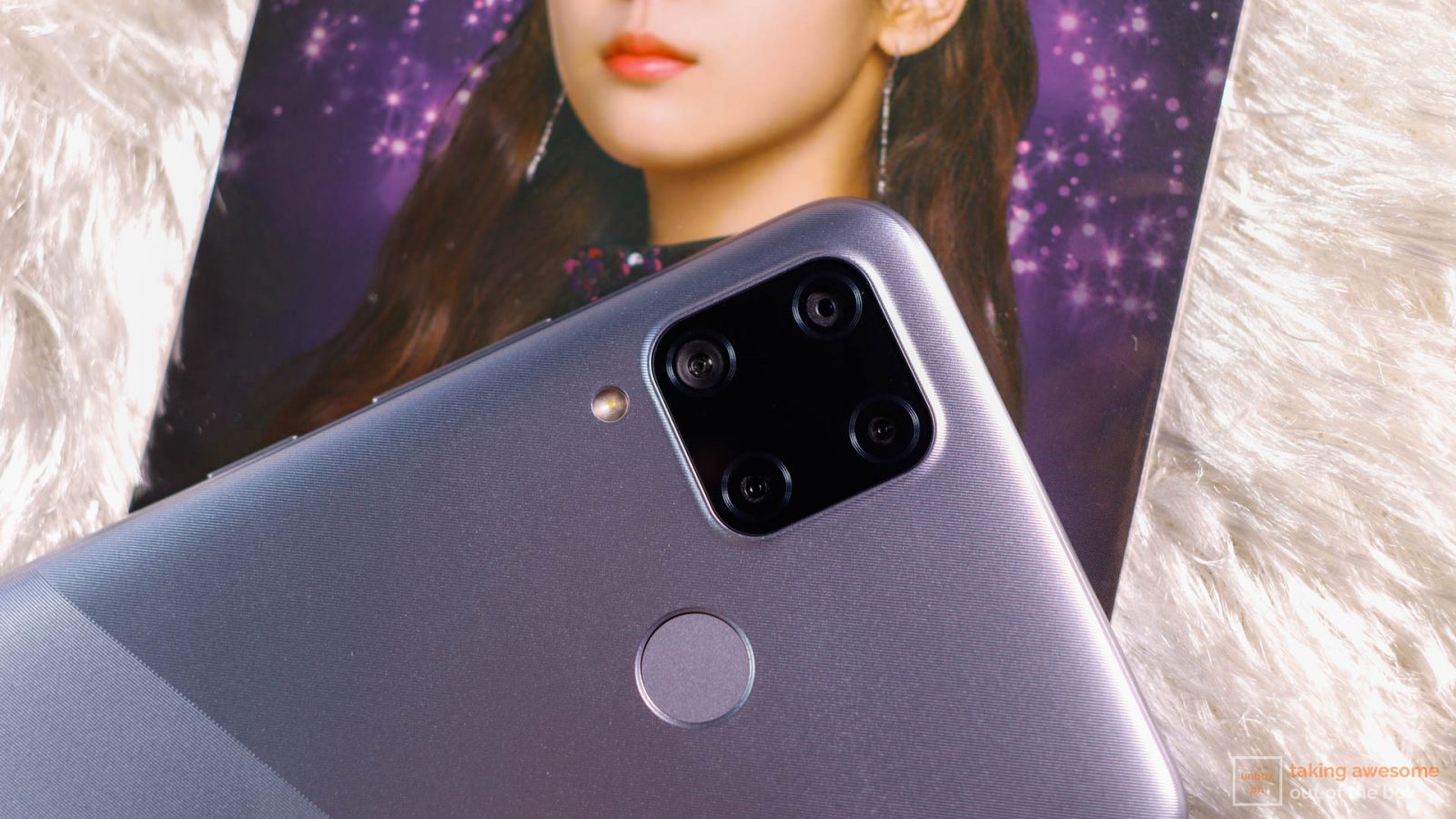 Unlike the C11, the C15 has a textured back with Realme’s more familiar geometric design. Key differentiators between the C11 and C15 include the latter’s rear-mounted fingerprint scanner and camera module housing four rear cameras, placing the LED flash outside of the module. Because of the phone’s thickness, the camera module sits flush, so you don’t have to worry about the phone wobbling when you place it flat on the table.

Like the C11, you get the same button and port layout on the C15: SIM card tray on the left side, power and volume controls on the right side, and headphone jack. MicroUSB port, and loudspeaker at the bottom. We’re bummed to see the C15 have an aging MicroUSB port, especially with some of the competition already shifting to USB-C. 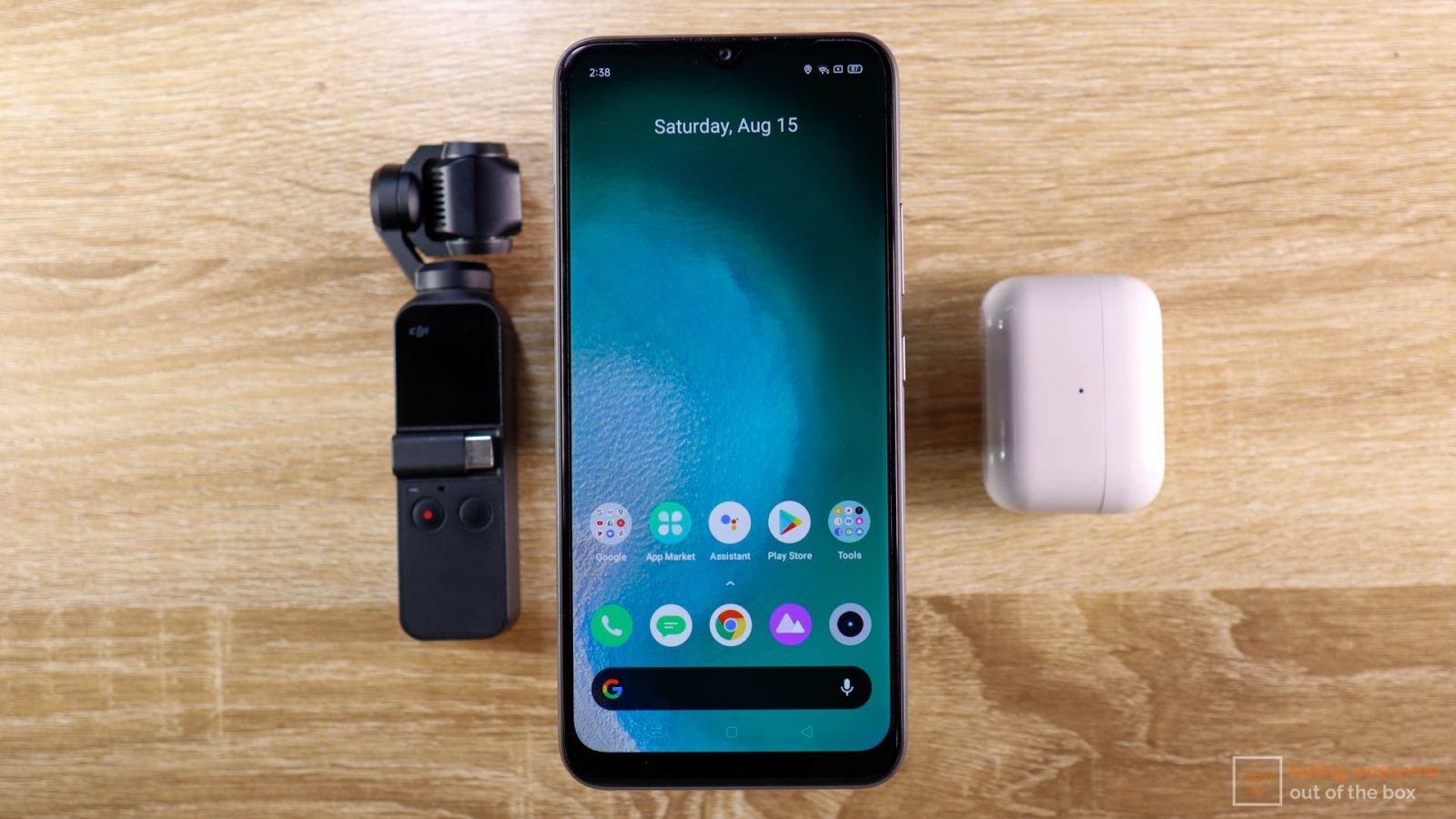 Same display with the C11

Like the C11, you get the same, large 6.5-inch HD+ IPS display on the C15. The only difference here is that the C15’s waterdrop notch houses a slightly better 8-megapixel selfie snapper. 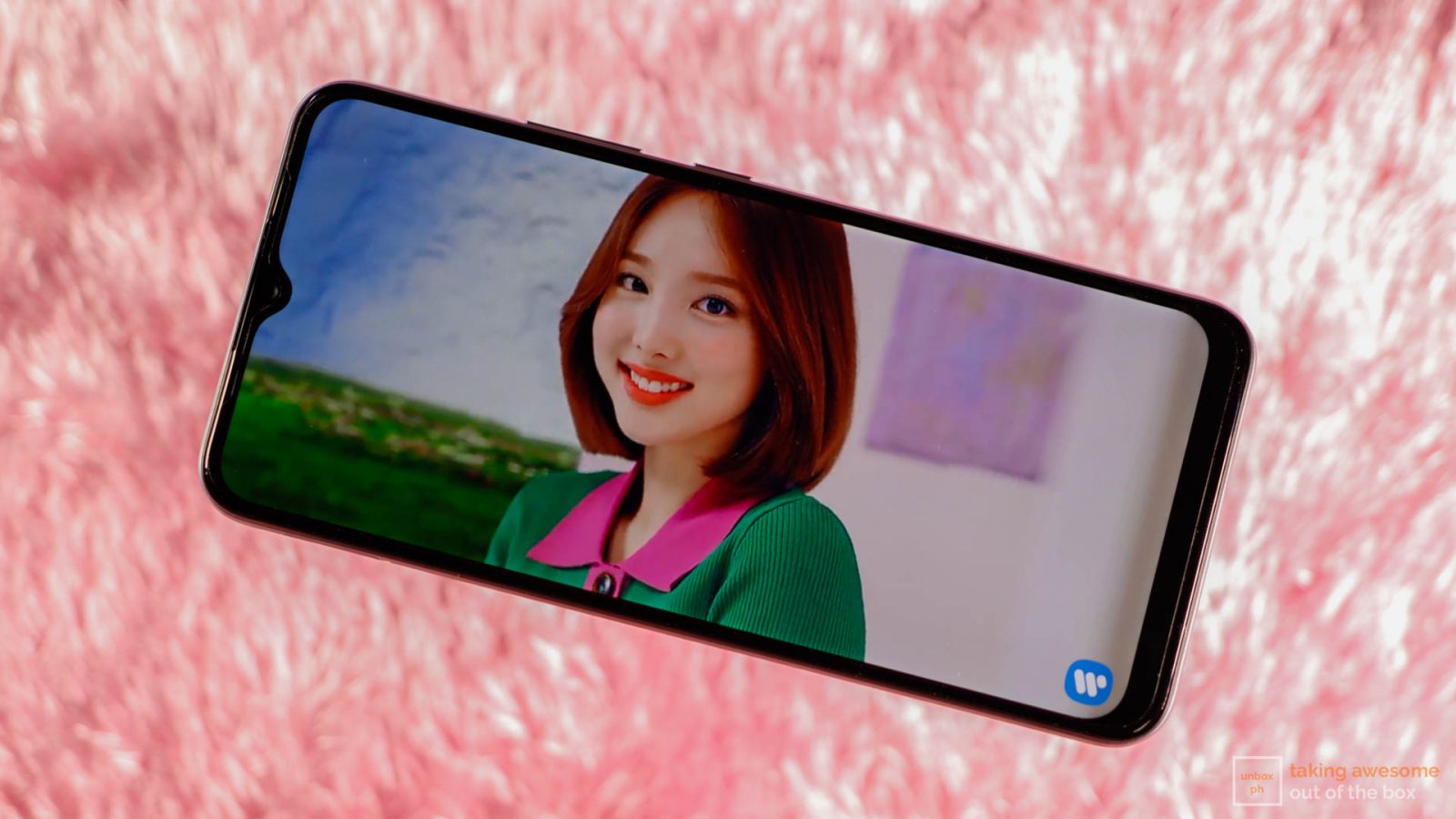 Like with the C11, the C15’s HD+ resolution is good for day-to-day use, though it struggles with outdoor use. As for colors, the C15’s display is pretty spot-on as far as accuracy is concerned. 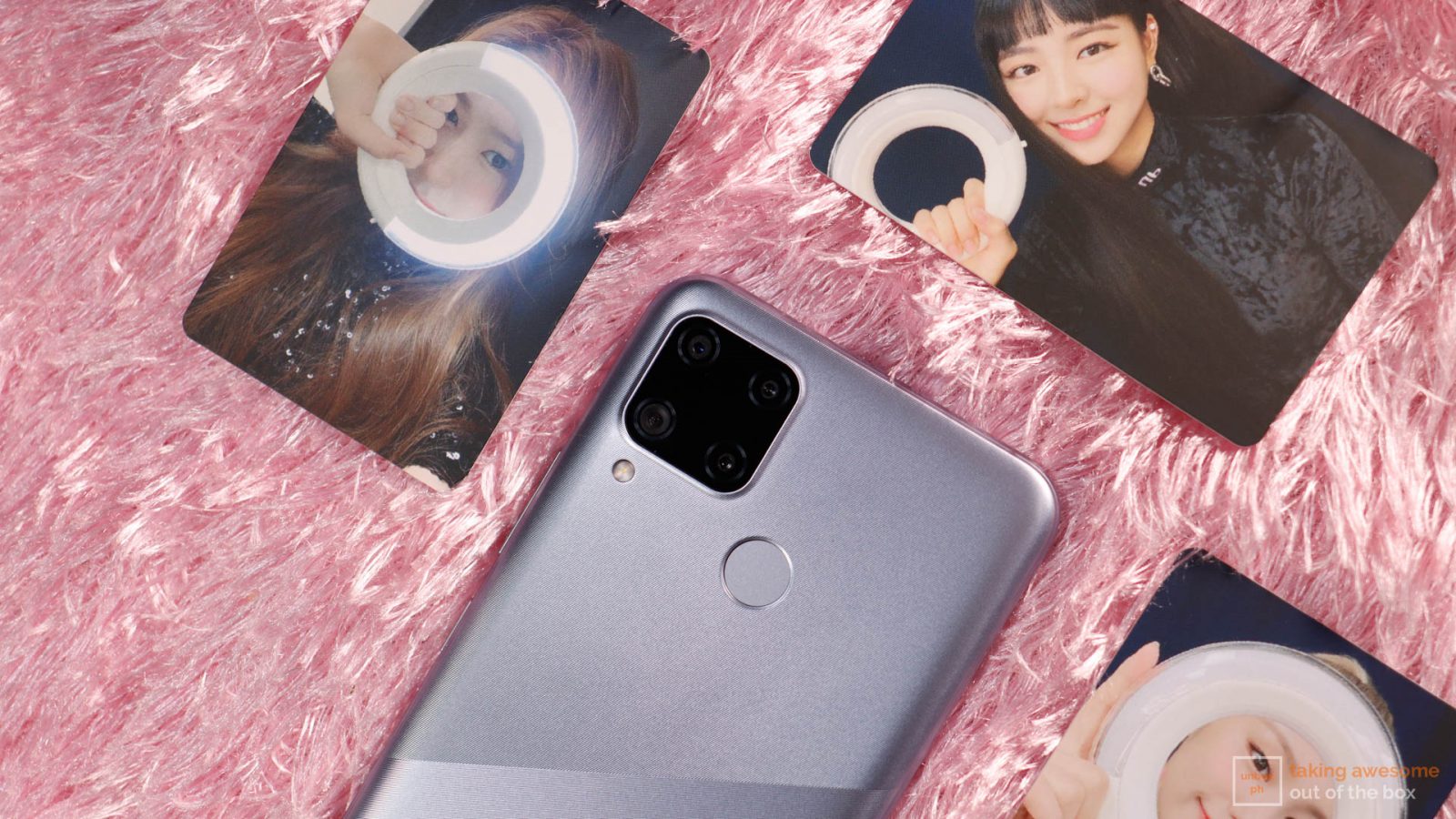 Well-utilized hardware and software for the cameras

The C15 addressed the problems we encountered with the C11: shutter lag is no longer an issue, and autofocus is more responsive. Regardless if you use the main camera or ultra-wide-angle camera, both snappers delivered consistent image quality and accurate white balance. When pixel-peeping images, Realme’s post-processing does a fair amount of sharpening to make the photos as detailed as possible without looking too artificial.

Selfies using the C15’s 8-megapixel front camera look good, and its portrait mode feature is one of the better implementations in any budget smartphone to date. Don’t expect too much with the selfie shooter, as it struggles with balancing exposure in mixed lighting conditions.

For videos, the C15 can shoot up to Full HD that is usable in daylight conditions. Here is the sample footage: 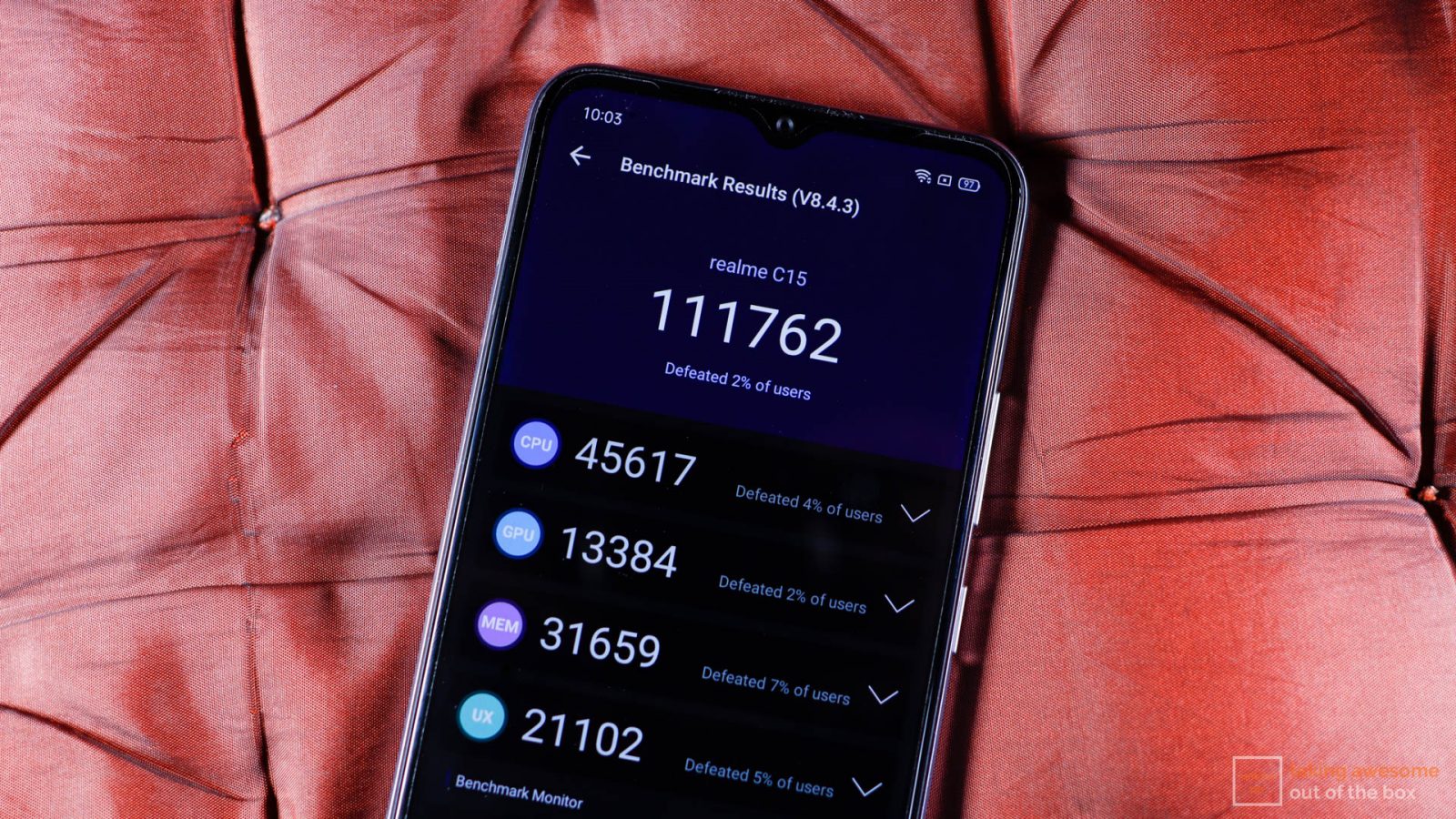 Like the C11, the C15 uses an Helio G35 processor, which is a 12nm-based octa-core processor with a maximum clock speed of 2.3Ghz. We got a score of almost 112k in AnTuTu, which is way lower than what we got with the Helio G70-powered C3.

The C15 is better than the C11 because it has more RAM (at 3GB/4GB) and internal storage (at 64GB). This is evident when multi-tasking with different apps and with the response time of the cameras when taking a photo. Like the C11, the C15 is not meant for serious gaming. We tried to tone down graphics settings with Asphalt 9, and we encountered a number of frame drops during our gameplay. 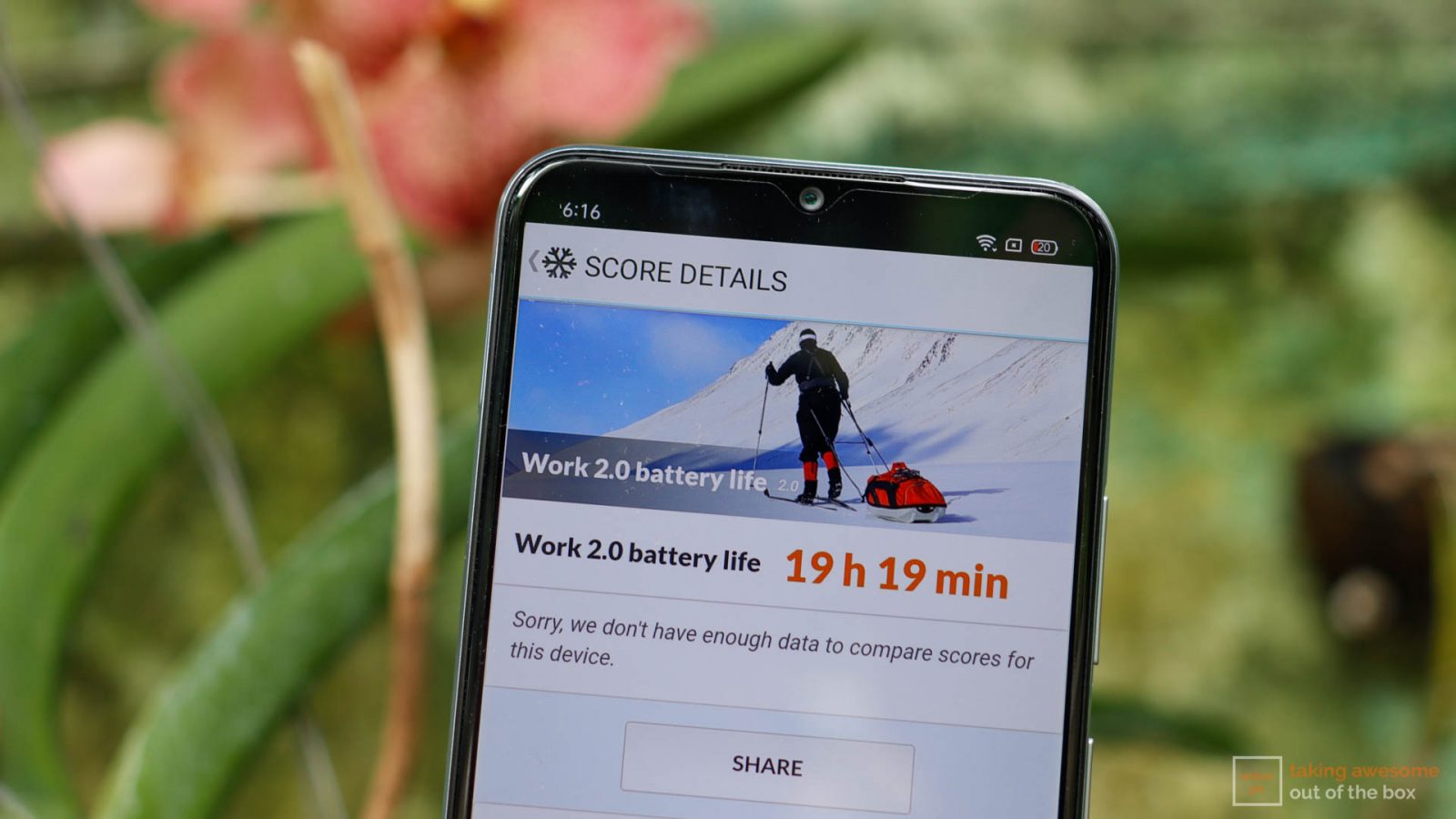 Like the C11, the C15’s real forte is its battery life. With a bigger (and class-leading) 6000mAh battery to boot, we got a score of over 19 hours in PCMark, making the C15 one of the longest-lasting smartphones we have tested in 2020. Because of the bigger battery, Realme added support for 18w charging so that you can top it up faster. It took us around 3.5 hours to charge the battery from flat to 100%. 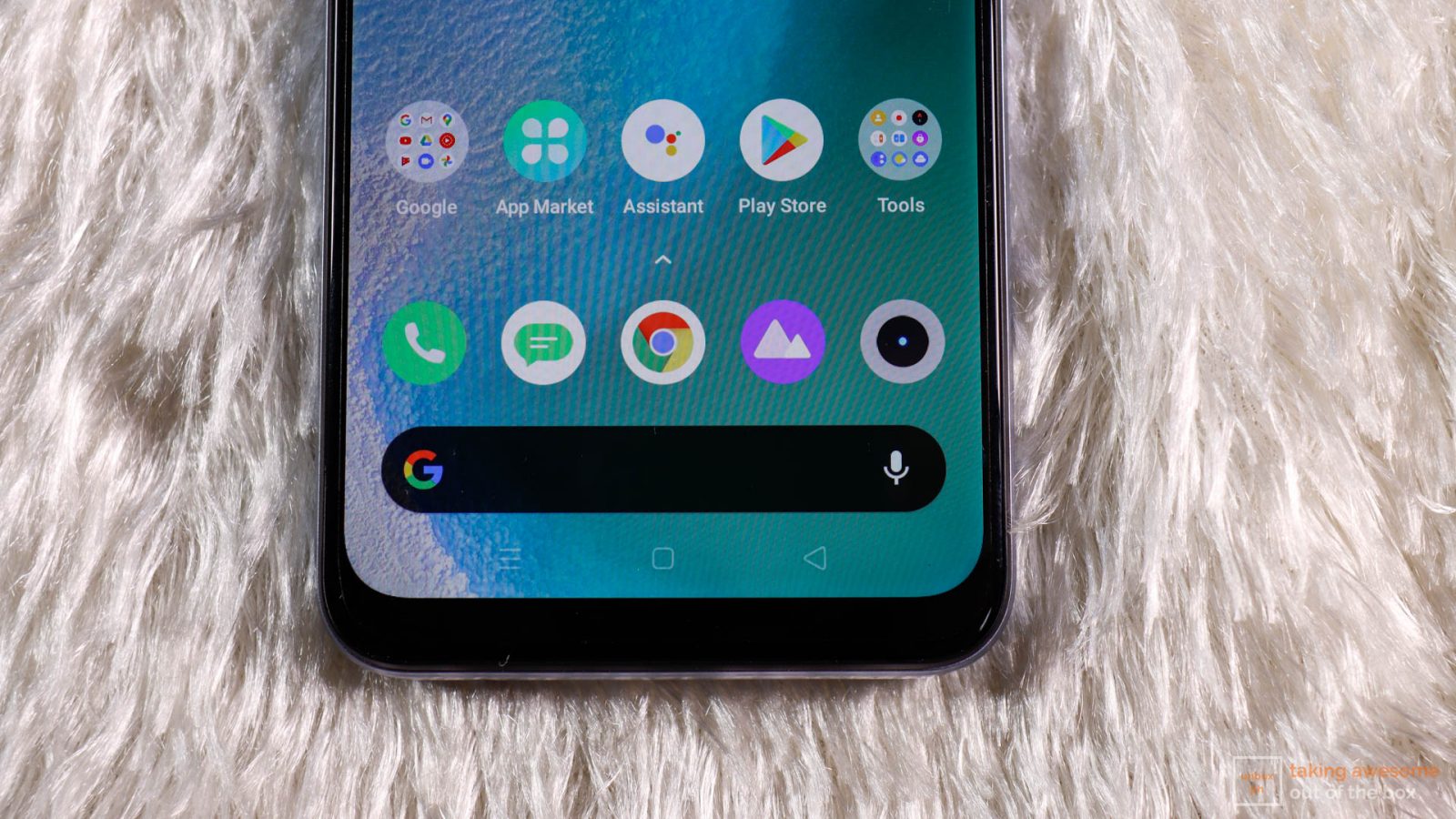 You also get Android 10-based RealmeUI on the C15, and it is one of the cleaner, skinned versions of Android to date.

If you have extra coin and are considering the Realme C11, you should try to get the C15 instead. While both phones aren’t recommended for gamers, they’re good enough as general workhorses, and the C15’s battery is more than enough to deliver more than a day’s worth of use without having to be charged, with the added bonus of having decent snappers for the price.

As with our verdict with the C11, the C15 is not the phone to get if you intend to play games: for that use case, Realme has the C3 instead. 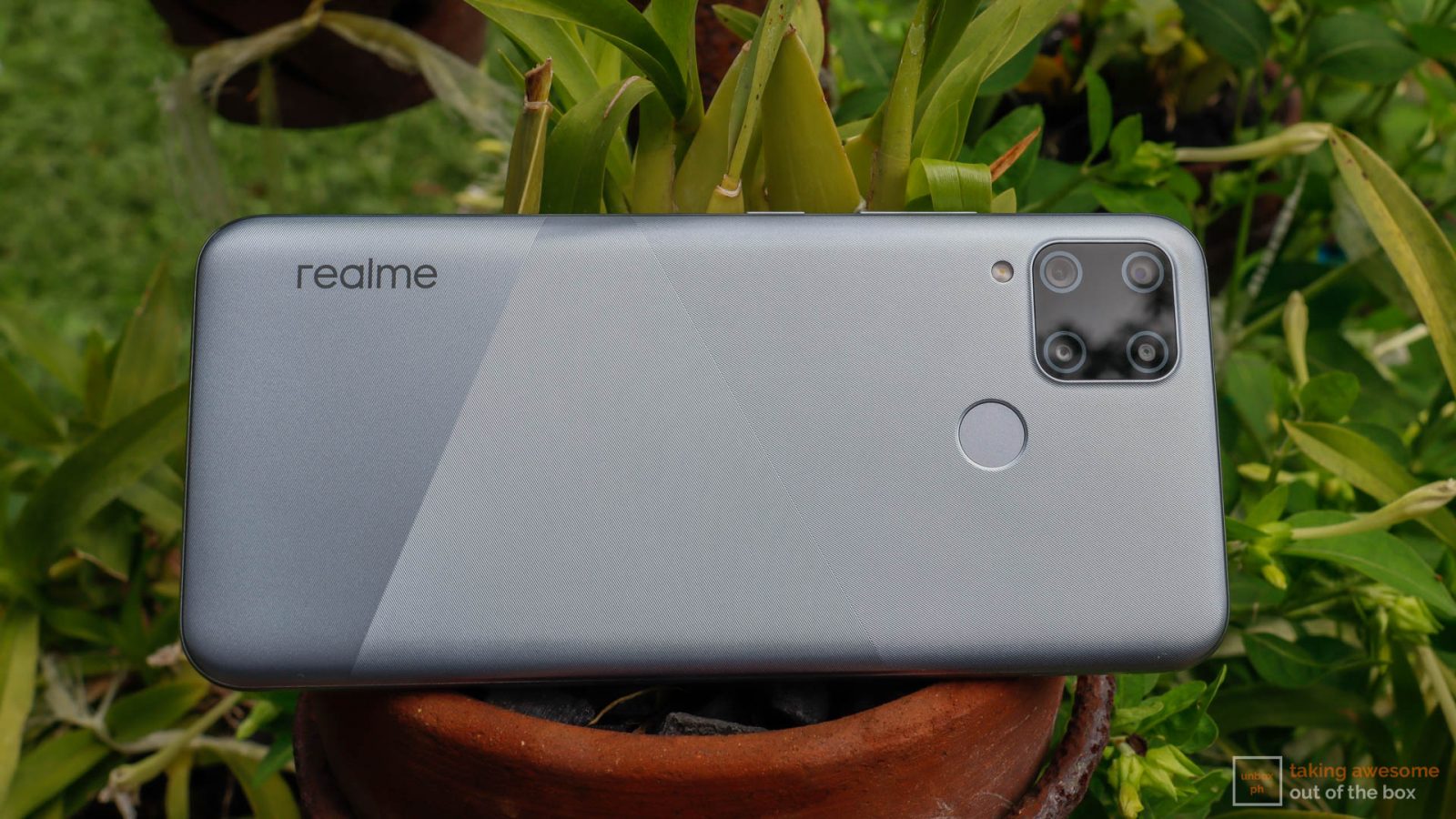 The Realme C15 is priced at Php6,490 for the 3GB/64GB model and Php 6,990 for the 4GB/64GB variant. The former is exclusive to Lazada while the latter will be available on both online and offline stores. Realme will hold an exclusive online first sale starting August 20, 6:30 PM at Lazada, while offline selling will start nationwide on August 21.

If you are interested in the special edition Doodle Box, that version will be sold in the 3GB/64GB variant via Lazada on August 20 and 28.

Realme's Next Phone to Pack a 120hz AMOLED Display