Big Things In a Small Package

Japanese brand Sony has a long history of providing gear for personal audio. They’re the brand that gave us the Walkman all those years ago and it’s no surprise that they’re one of the top players in the game. We had the chance to try out their newest truly wireless earbuds a little over a week ago, so it’s time to give you our thoughts on whether or not these are worth considering at Php 12,995. 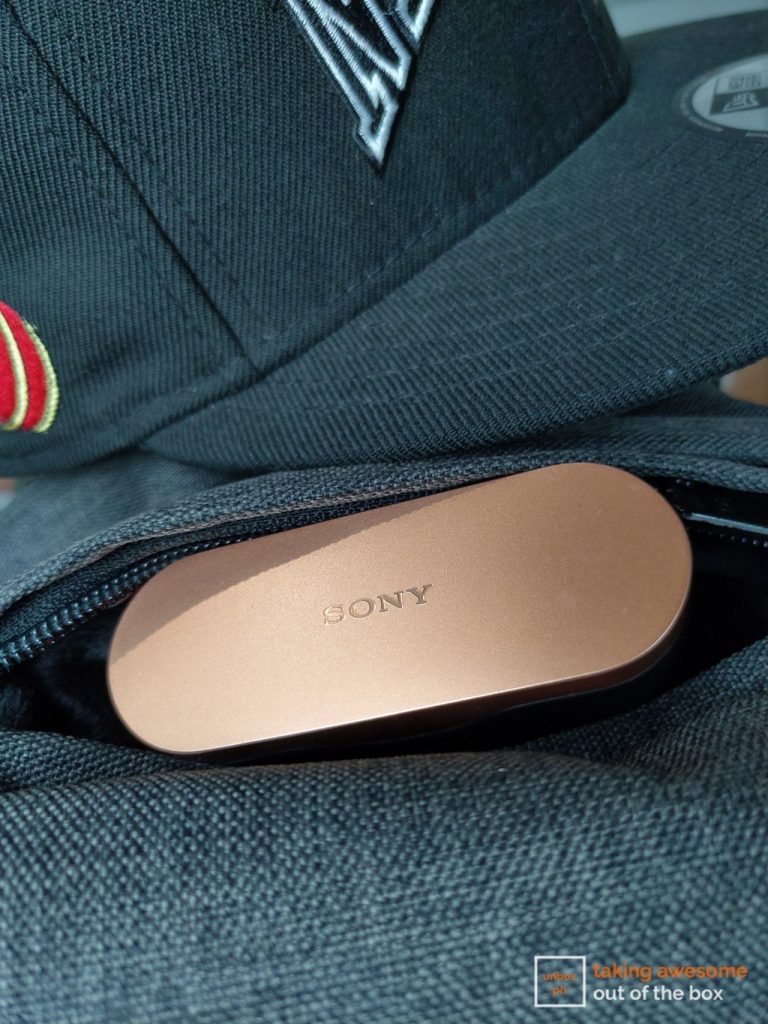 Extremely Easy to Take Around

Before we whisked away to Japan, I was already personally thinking about getting a pair of noise cancelling headphones from Sony — The WH-1000X M3. They were given high praise by other publications and even won battles when pit against some of its competition by our favorite tech YouTubers. There was just one major downside for me though. It’s size.

They weren’t particularly bulky nor were they larger than other offerings in the market. It’s just that I didn’t have the space, especially when I was out and about for coverage. This is where the WFs come in.

While the case is larger than that of the Samsung Galaxy Buds or the budget offering that are the Redmi Dots, they can still easily fit in the pocket of my backpack that’s meant for sunglasses or my pocket if I really didn’t want to lug everything around. 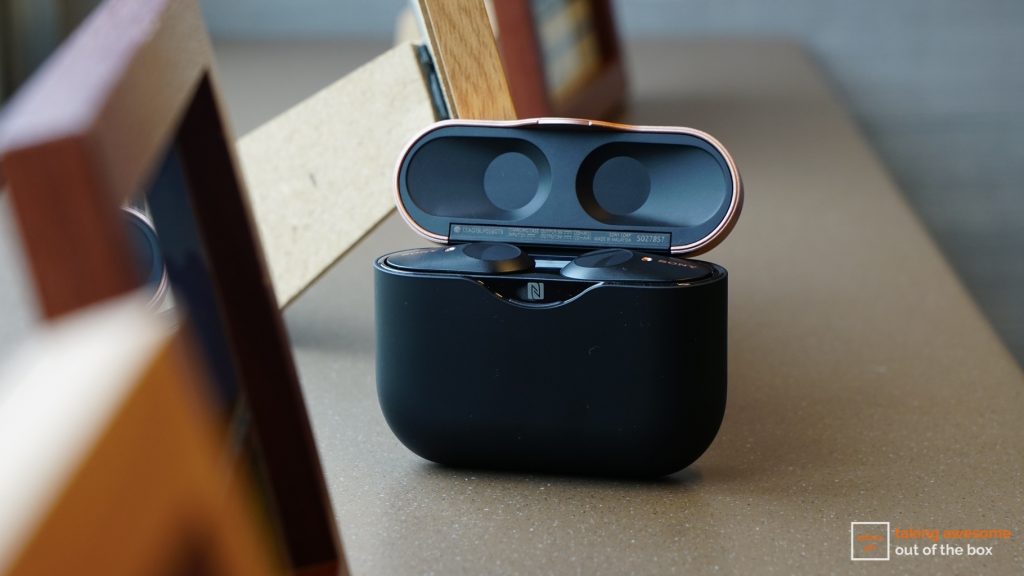 One of the things we want to take a look at when we do get wireless headsets or, in this case, earbuds is how seamlessly how it connects to your device and how well it holds that connection. We’re happy to report that the Sony WF-1000X M3 passes with flying colors.

The initial pairing process was quick and easy. The only confusing bit for me was the fact that I was in a bus full of other media who were also trying to connect to their own pair. Thankfully though, the case does have support for NFC so all I had to do was give it a quick little tap and we were good to go.

Now, I am on an Android device so that was pretty much it for me but the execs from Sony that there are a few extra steps for iPhone users.

It’s been paired to my daily driver ever since and the connection hasn’t dropped on me yet so I think it’s safe to say that it’s pretty stable. The brand says that’s thanks to optimizing the design on the antennas of these buds and it looks like it paid off big time. 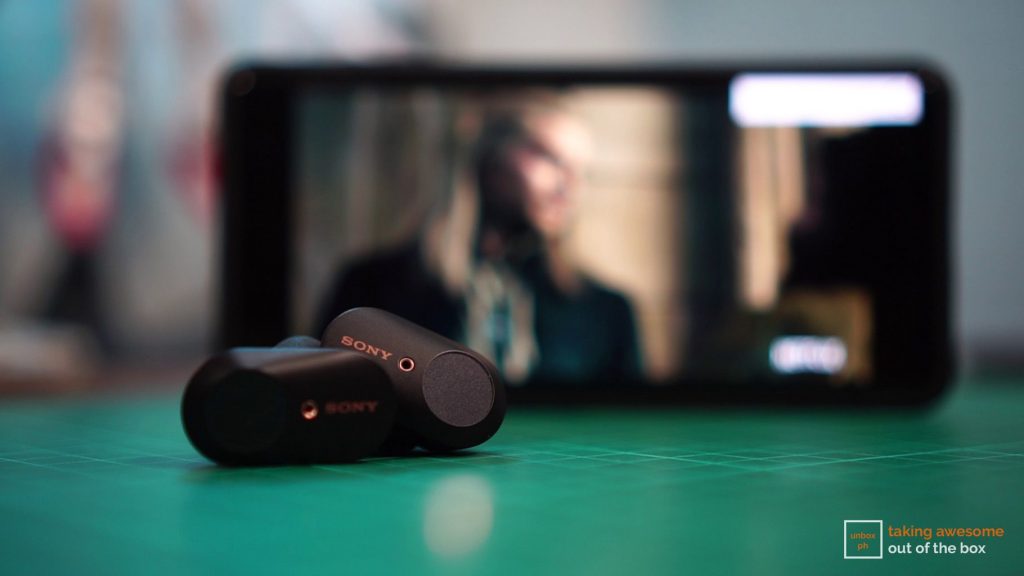 One of the biggest problems with the first iteration of the WF’s was the fact that it suffered from latency issues. This was very prominent when watching videos as it would pretty much look like one of those Kung Fu movies that were dubbed into English when I was a kid. The sync was noticeably off and that’s something we didn’t experience with the M3’s. 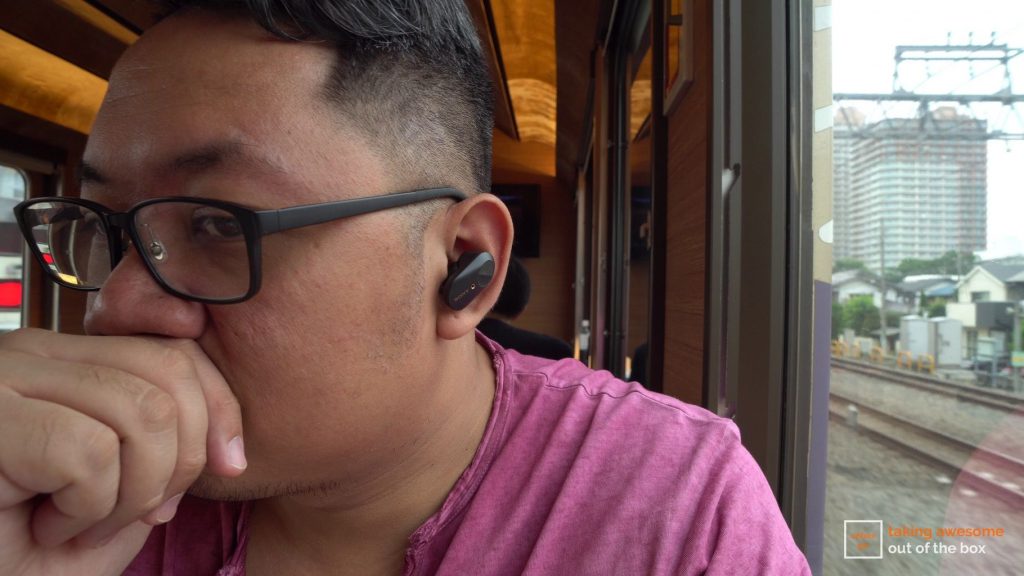 If there was one word that stuck while we were being briefed about these earbuds, it was “Balance” and that resonates (pun intended) when I think about the sound quality of the WF-1000X M3. By no means do I consider myself an audiophile in any way but I think it had a good mix between the highs, the lows, and the mids. It never left me feeling wanting for more punch and you can definitely appreciate the vocals of the current hugot song you might be listening to.

If you are a little more discerning of your audio gear though, I might have to recommend going with the WH-1000X instead since these don’t support LDAC or AptX so, it in that regard, it might fall a little short but, again, it all comes back to balance and it’s one of the compromises that Sony had to make to deliver on the rest of the device’s features.

To make up for it, you do have DSee HX (Digital Sound Enhancement Engine) and the easiest way I can explain this is that it upscales the audio to near Hi-Res quality; much like how their TVs upscales 1080p content to 4K.

It does the job quite well to make the tunes I was listening to richer but, again, there is a noticeable difference between these and its on-ear counterpart. 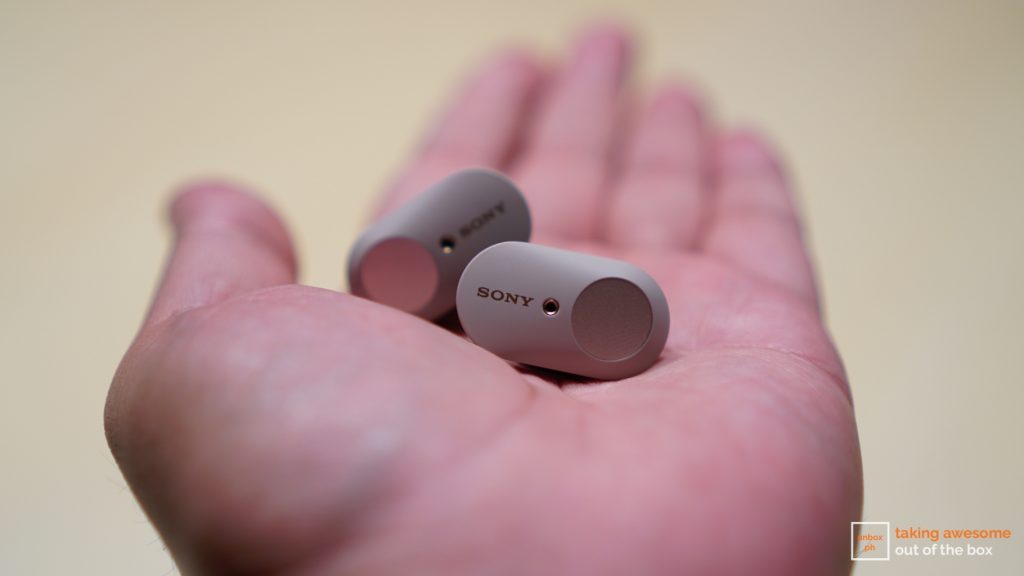 A Sense of Personal Space in a Crowded Metropolis

Speaking of features, the main one on the M3s is Active Noise Cancelling.

Now, you already have pretty great sound isolation because of the fact that these are in-ears but as a reminder, make sure you choose the right tips so that you get the best sound out of these things and so they don’t fall out. Also, there are two tips that come inside the packaging and the ones built for comfort does offer a little less isolation but they’re a godsend for long transit times.

But, back to the topic at hand — Noise Cancelling — and the ones on these tiny earbuds do quite well.

As I’m writing this review, I am currently in a coffee shop with the regular hustle and bustle of meetings plus a few friends sharing a few laughs and I am happily listening to my chill tunes in a little corner. It was the same experience while I was in transit to and from Singapore and Japan as well.

If you do need to be a little more aware of your surroundings, it is adaptive so you the earbuds can give you presets to let in ambient sounds but you can turn off Adaptive Noise Cancelling altogether and manually control how much of the outside world you want to let in.

One of the questions I got asked when taking these around is how the sound quality is and it’s pretty middle of the road.

People I’ve talked to using these say that it sounds like I am using the speakerphone but it sound clear even though I was trying to be a little discreet. It did pick up a fair amount of background noise so I would still suggest taking these off and actually using your smartphone if you don’t want the whole world chiming in on your business.

The App is a Necessity

One thing I failed to mention earlier is the fact that you do have to download the Sony Headphones Connect App. You can choose to forego this but, you can really open up what these earbuds can do from adjusting your EQ, the Noise Cancelling controls, and the touch controls as well.

It’s all pretty straight forward and doesn’t take up too much space on your device as well. 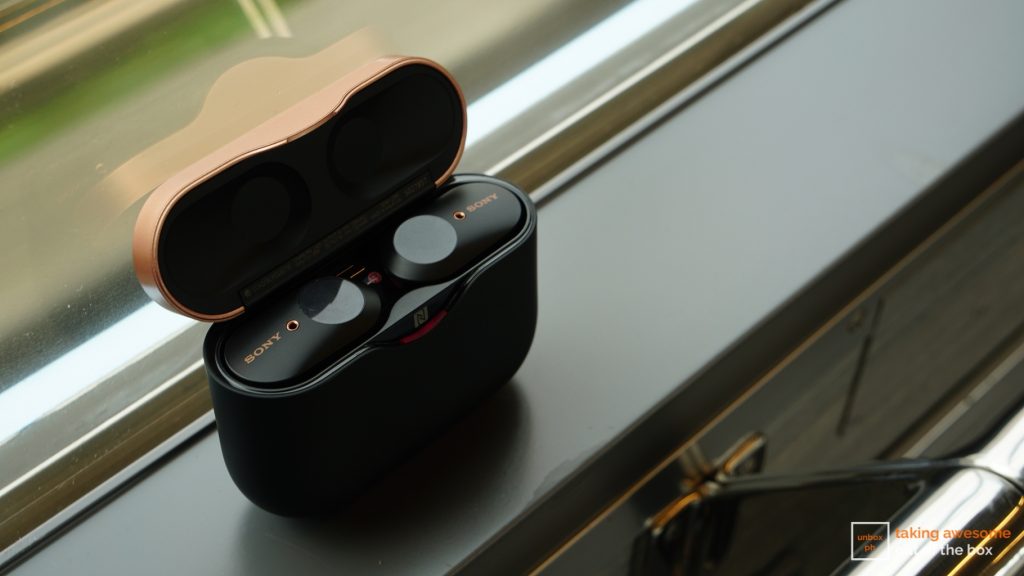 Despite its small frame, I was pleasantly surprised with how long these earbuds actually last. Sony had it rated for 6 hours on the earbuds alone with 3 extra charges in the case to give you a total of 24 hours worth of juice and that’s with Active Noise Cancelling on. Brands often exaggerate this number but they were right on the money.

A 2-hour bus ride saw the battery life dip down on my unit from 100 to 66-percent and it easy lasted me my time at the airport plus the flight to Singapore; only putting them back in the case when I had to go through security checks.

These will definitely have enough lasting power for long haul flights.

One of the biggest downsides for the WF-1000X M3s is the lack of an IPX certification.

Yes, friends. They’re not sweat proof and you probably don’t want to get caught out in the rain with these on. It’s kind of a bummer since I know some people would have wanted to take these with them to the gym. Also, I don’t have to tell you how hot and humid our country can get. 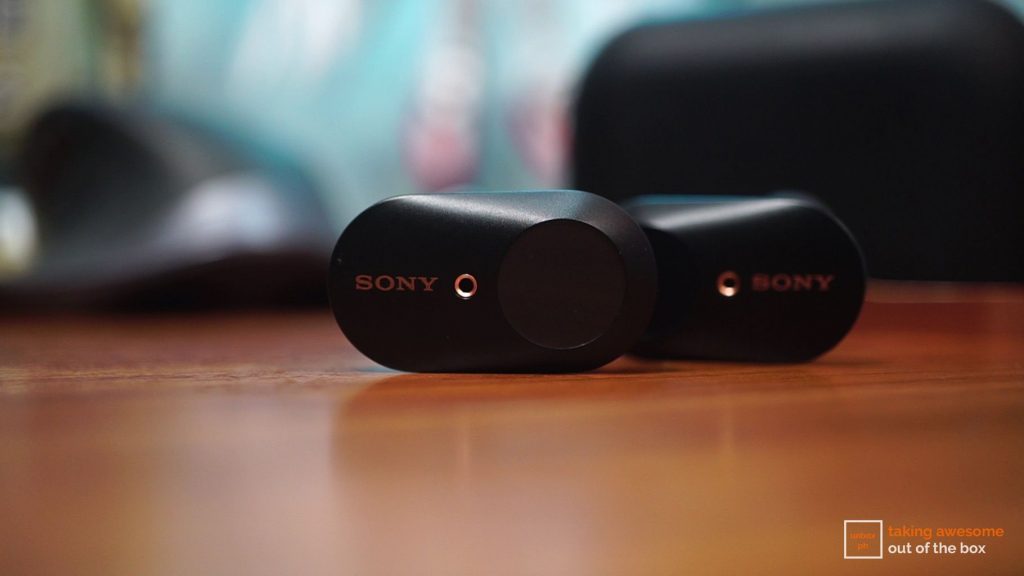 Verdict: Portability is the Key

For Php 12,999,  these earbuds are something that I can easily recommend taking a look at as an option if you’re in the market for great audio gear with noise cancelling and want something that can fit in your pocket. Now to be honest, it’s not the best sounding ones we’ve tried — again, not to say that they don’t sound fantastic in their own right — but it makes up for it for all of its features and the battery life is just absolutely stellar.

Sony has an event running in Greenbelt 5 so you can come over and check out how these babies perform for yourselves and I really recommend giving these a listen if you get the chance.

Now, if you really want something that is capable of pumping out Hi-Res audio, the WH-1000X is your choice but prepare to shell out a couple of thousand pesos more. It’s well worth it though. 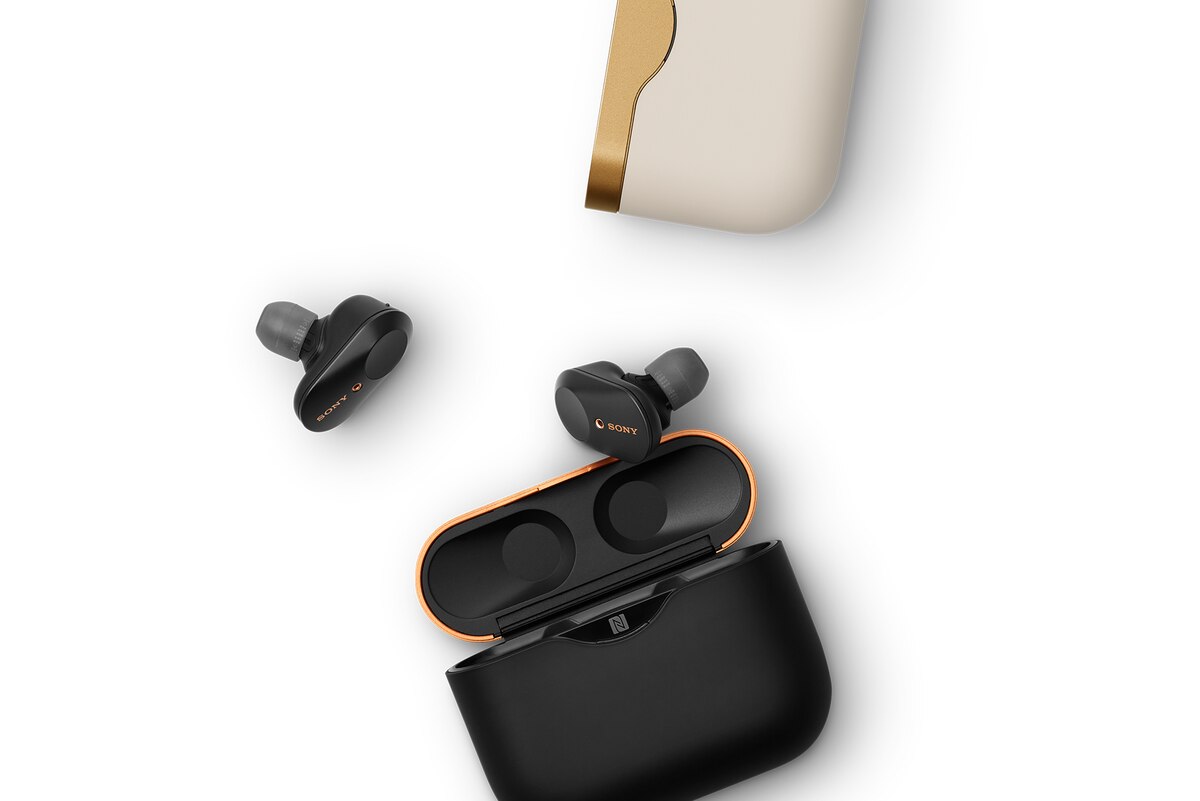